This is the story of a gifted and natural performer from Manayunk, who found his bliss introducing campy monster movies with corny skits and magic tricks, in ghastly makeup and an assembly of random guests including John Carradine, Lassie, and the guy who played Goober on the Andy Griffith Show. He was on the air from 1969 until his sudden death in 1979 – and we loved him, every minute! Ask any GenXer who grew up in the Delaware Valley if they know who Dr. Shock is, and they will light up every time (a lot of Boomers will, too).

These days with so much entertainment instantly available everywhere, it’s hard to convey what a rare treat TV and movies could be back in the 1970’s, before cable hit the scene. The whole Philly area only had a half dozen channels plus PBS. Rent a movie? Yeah right, VCR’s were ridiculously clunky & expensive back then – and good luck finding a Blockbuster (the first one didn’t open until 1985). So if you were flipping channels on, say, a Saturday afternoon or late at night, you sure as hell would pause when you saw the tall man gussied up like a ghoulish funeral director, goofing for the camera!

Dr. Shock was somehow able to simultaneously promote and mock his features with infectious glee. Audiences were charmed, and a generation of young Philadelphians found great comfort in his consistency, and commitment to his fans. We attempted his magic tricks, we waved at him in parades. We grew up with his sidekick “Bubbles” (actually his daughter Doreen) who went from toddler-lifting-Daddy’s-coffin-lid in early opening credits to a full-fledged magician’s assistant at the heart-breaking end of his career. For a lot of us, his untimely death at 42 was the first celebrity loss we remember, the first time we’re sad for someone we didn’t actually know. 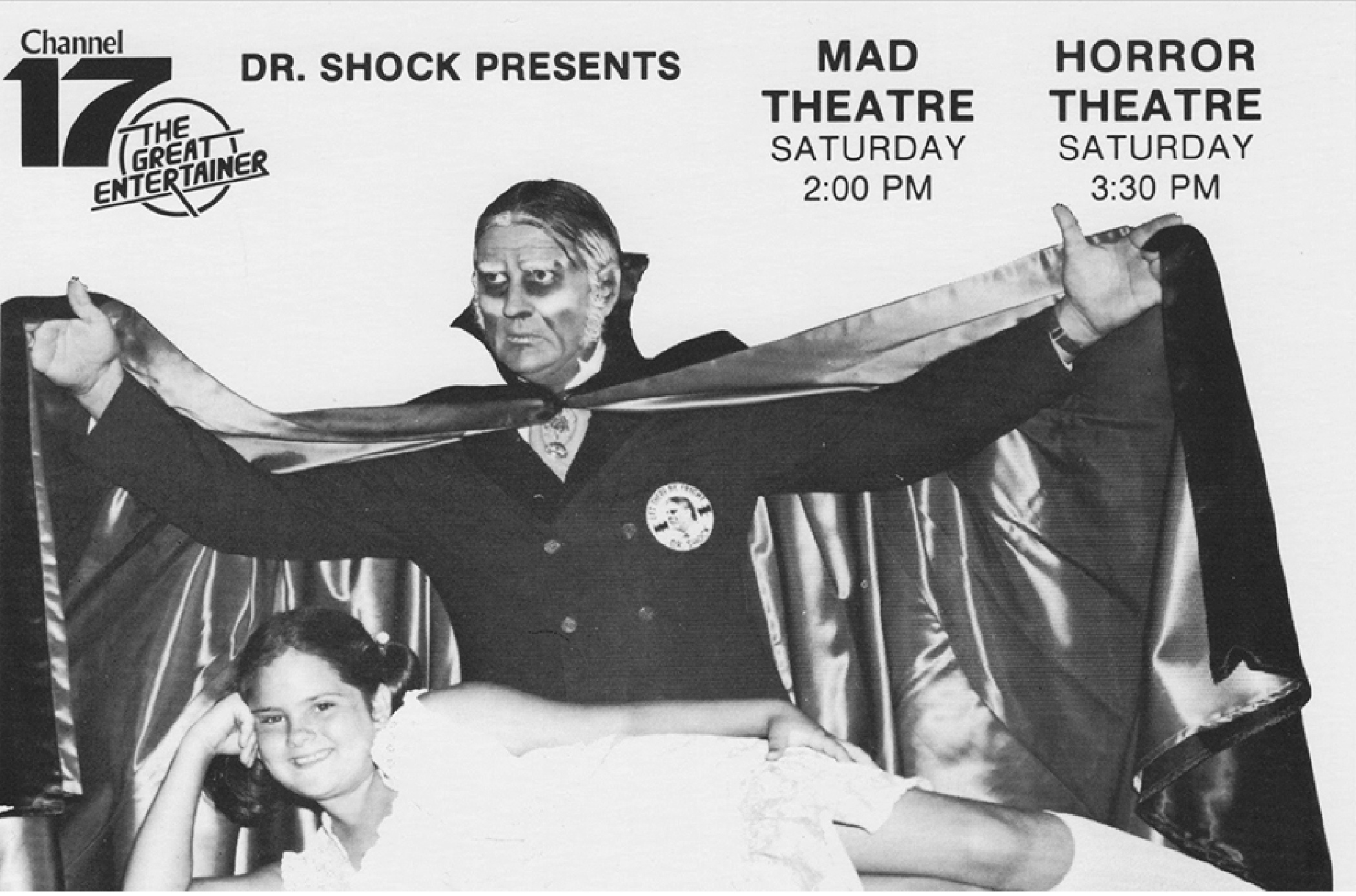 But that was Dr. Shock’s gift – he was such an authentic soul, it was easy to connect with that warmth and feel like you’re buddies. As a kid, it certainly made an impact to see someone of his stature enjoying these silly movies that most grown-ups would never waste their attention on. Not all of Dr. Shock’s features were hokey, though! He also showed the great old classics, including the original “Dracula” and “Frankenstein,” presented here on TV for the first time as a special double-feature. No matter what was playing, Dr. Shock approached it with humor and fun.

But who was Dr. Shock? Philly historian Bob McNulty pulls back the curtain on this beloved local icon to reveal a family man and community booster  – and also a talented showman who embraced life fearlessly, leaving behind a big pair of spats no one’ll ever be able to fill.

Joe Zawislak played Dr. Shock on Channel 17 from 1970 until his death in 1979. He started life as a young boy in Manayunk, born to Joseph Zawislak (164 Conarroe St) and Anna Kappe (4692 Wilde St) who married in November 1936 and moved together to 312 Carson St. Joseph worked as a chef at Morris’s Luncheonette (1631 Ranstead St) to support his four children who would soon come along. 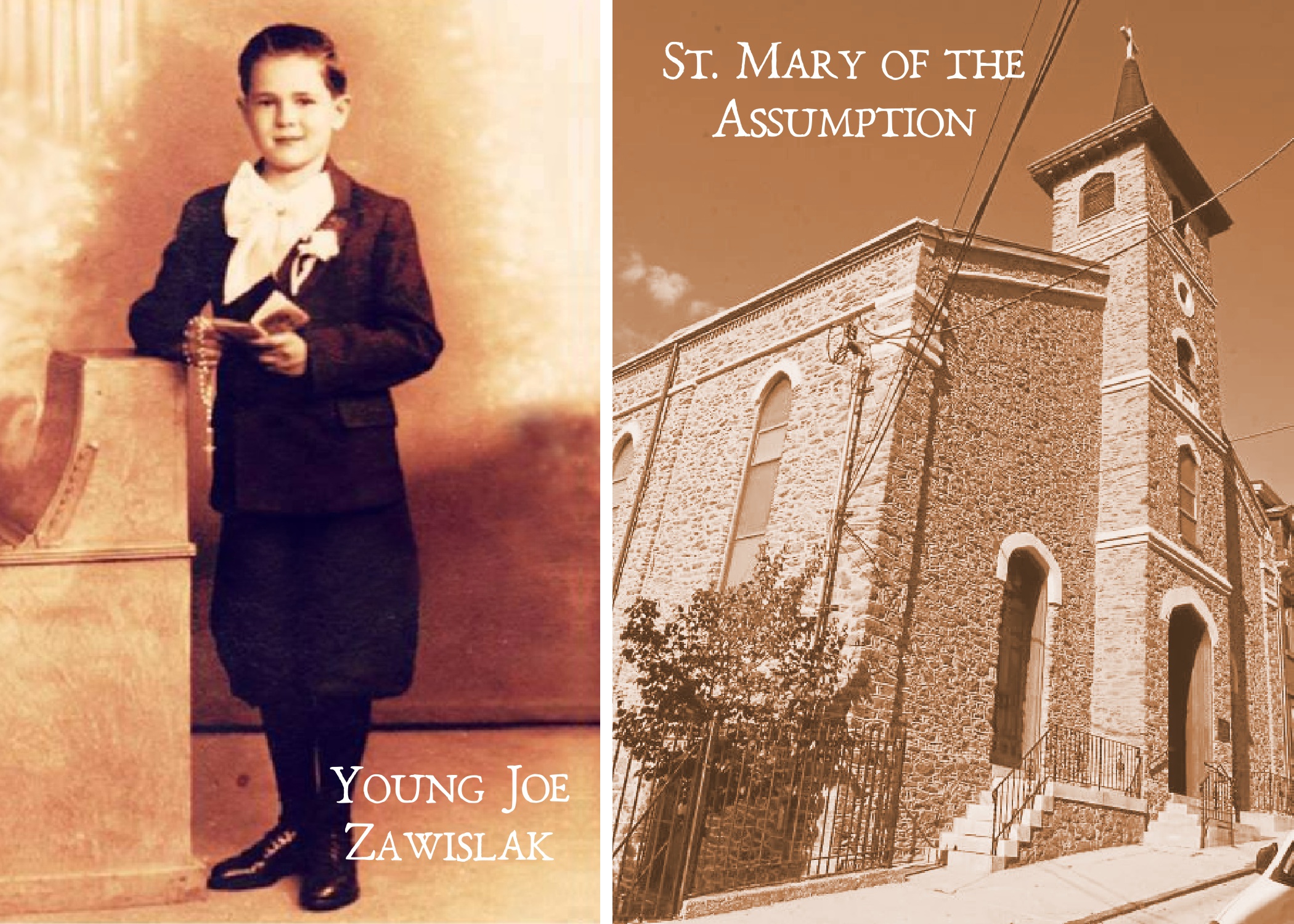 Joe came first, born in 1937 followed by Bob, Anne, and Charlie. The Zawislak family belonged to St. Mary of the Assumption Roman Catholic Church – Joseph’s parents (Polish immigrants) lived right next door. The children attended grade school together at St. Mary’s where his sister, Anne Zawislak Strohl, recalls how artistic he was, and how he would create stunning paintings using different shades of shoe polish.

Joe also loved pets — he had a big heart for animals but also a real penchant for daring and mischief. His brother Bob remembers some terrifying close calls: that time he almost pushed him on a bike into traffic, those homemade bombs that exploded shrapnel through the kitchen. 😱 These were accidents, of course, that became family legends.

Fortunately, Joe’s creative energy was soon directed to more productive pursuits. His father bought him an accordion which Joe learned to play beautifully. He and his sister developed a family act, of sorts, and Joe started doing impressions of Hollywood stars. His Jimmy Stewart could bring the house down! His sister swore, “Joe could tell the same joke twice, and you would still laugh.”

Joe was just 17 when his father died during risky by-pass surgery at the age of 42. With the head of their household gone, Joe dropped out of Dobbins Vocational School to help support his mother and siblings. He joined the Navy in 1955, three weeks before his 18th birthday. Discharged two years later, Joe came home and taught himself a bunch of magic tricks. He soon had an act with Sylvia Harriet DeNardo, performing as Dr. Alky and Sylvia and then later as The Fabulous Mister Joseph and Sylvia.

The couple married in 1958, and opened a steak shop at the corner of Baker Street and Leverington Avenue. Joe later went on to sell insurance, but he never stopped performing magic. One day, inspired by “Roland the Cool Ghoul” (a local TV horror host in the 1950’s), Joe dressed up in scary makeup to the delight of the children on his street. He was a hit with his family too – at birthdays and holidays, he’d show up as “Roland” and have everyone in stitches. “My Polish aunts would laugh till tears ran down their faces!” his sister said. 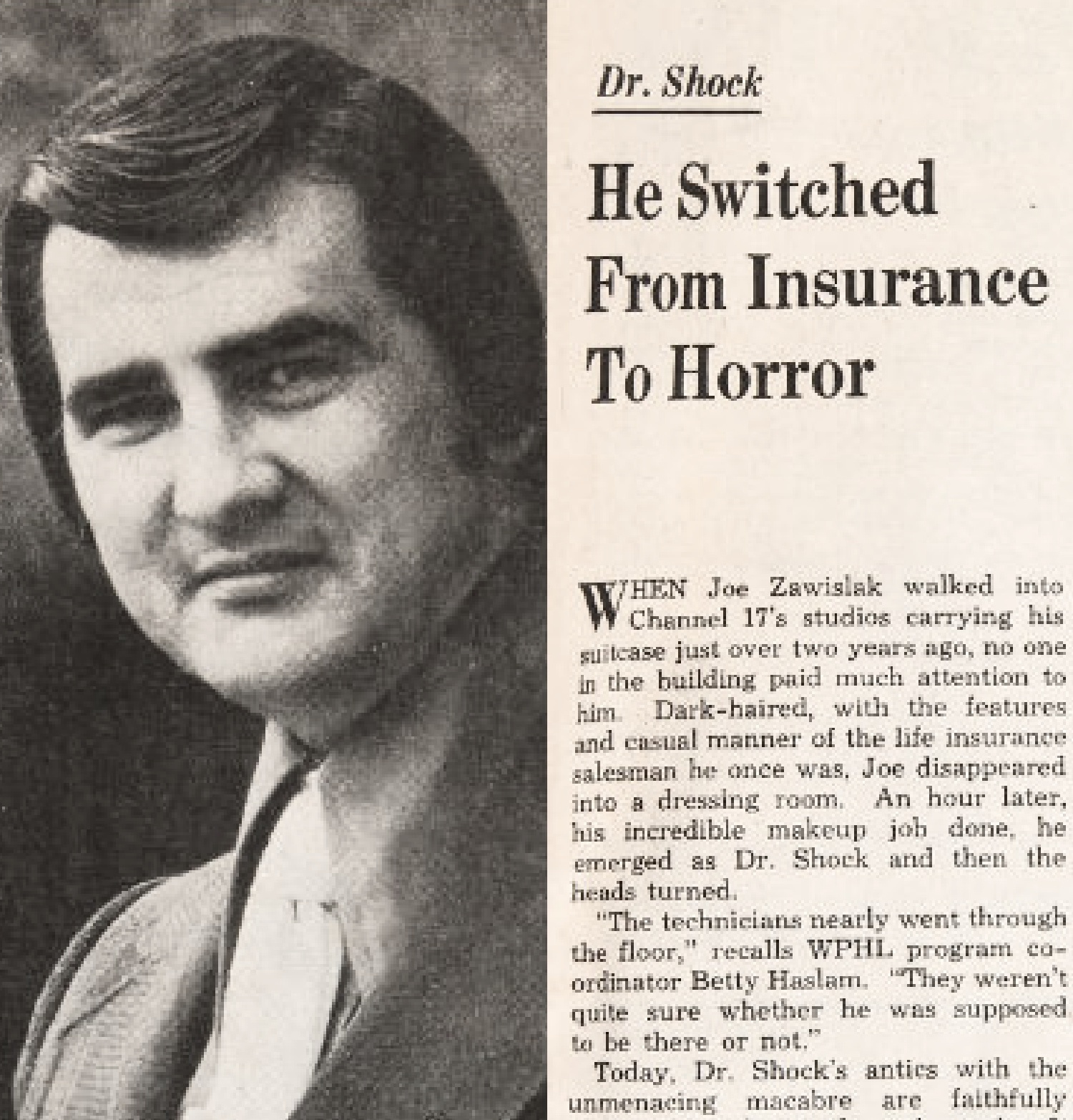 Joe and Harriet lived with their five children at 360 Krams Avenue, just another happy, regular family, until one day in 1970 that would change all their lives. Joe was waiting for a trim at the barbershop, when he overheard the man in the chair ahead of him – an executive at Channel 17 —  say that the station was looking for a horror host. Instantly, Joe delivered his Roland routine and was hired on the spot.

“Dr. Shock” may have been inspired by Roland, but his humor, charisma and showmanship are all Joe. After three months on the air, though, Channel 17 told Dr. Shock his services were no longer required. They were very wrong! Thousands of angry viewers flooded the station with so many calls and letters demanding his return that there was no choice but to comply. Dr. Shock was back, baby, with a new prime-time show starting at 7PM.

In 1972, Dr. Shock switched timeslots again, finally finding his groove with monster movie matinees, where he grew to become a staple of weekend programming. His features were bookended (and peppered) with daffy schtick that endeared him to audiences who even now fondly remember his show’s opening theme. Who can forget? Bach music swells as a demonic portrait morphs into Dr. Shock’s face, diabolically laughing… 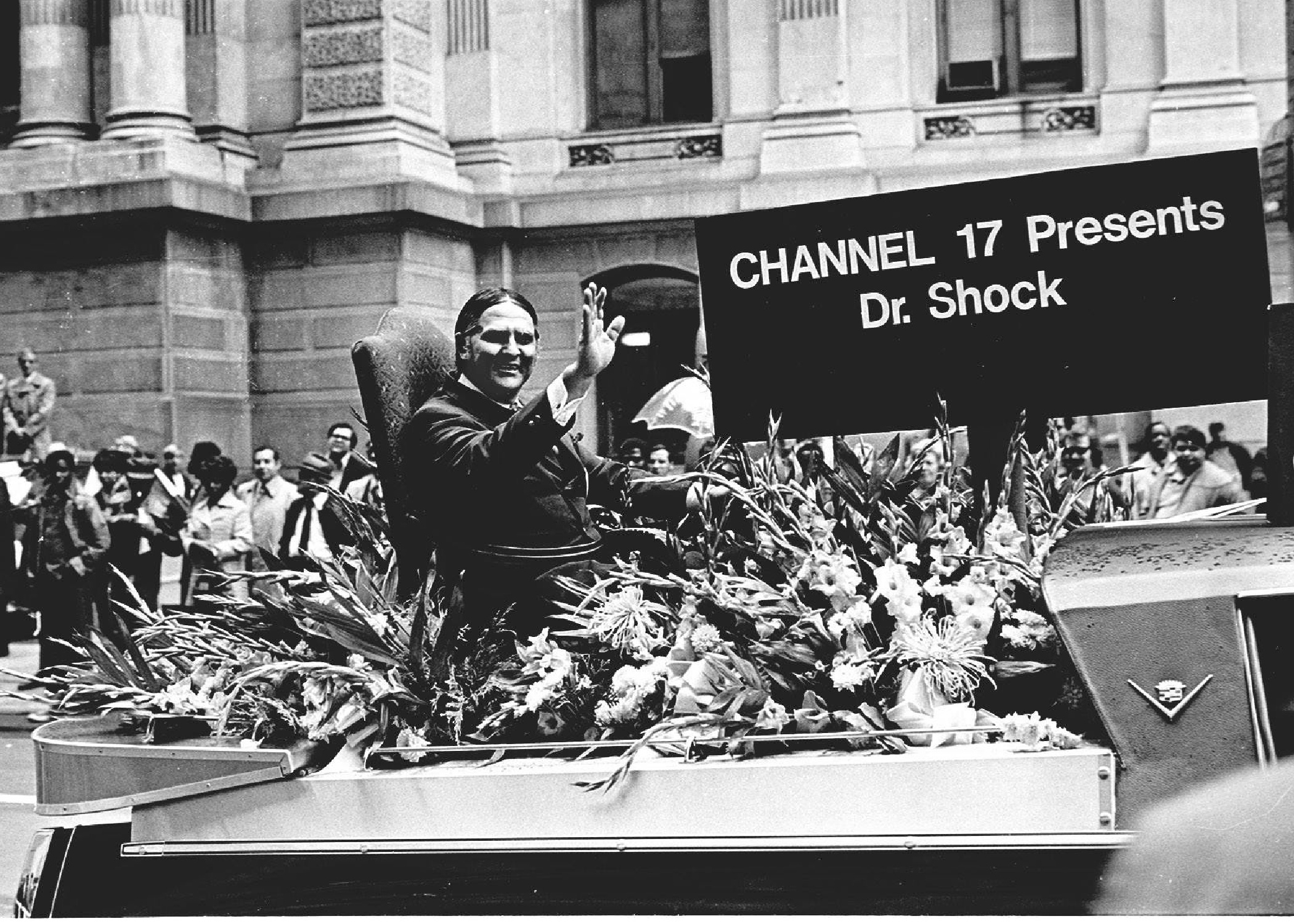 As his popularity grew, Dr. Shock became in high demand for personal appearances and would perform at fairs, store openings, high schools, and parades, always arriving in a hearse. He introduced the first concert at Tower Theater in Upper Darby (Dave Mason and Buzzy Linhart). Joe did a lot of charitable events, too, often appearing with world-famous celebrities. He was once even teamed up with Bob Hope himself at his Celebrity Golf Tournament! Through it all, Joe Zawislak always remained just a regular guy. And also a real cut-up, living life to the fullest.

On a winter hunting trip with his brothers to Sullivan County, Joe chased a deer deep into the forest and disappeared. The sun set and his brothers called and called for him, driving around and blowing their car horn to try to locate him. A game warden agreed the situation was dire and set out for rescue, telling the brothers to hold tight at a nearby pub. Guess who they found at the bar? 🤣🤣🤣

Joe loved the great outdoors but it didn’t love him – every time he took his family camping, it rained buckets. His brother Bob called him “Black Cloud” and remarked that even at his funeral, the skies opened over the cemetery and soaked everyone in a dramatic downpour: “I just looked up to the Lord as he was letting me know that Black Cloud was with him now, out of the rain.”

Joe collapsed at his home on September 27, 1979, and was taken to the Medical College of Pennsylvania where he died the next day. He was just 42 years old.

This post is an encapsulation of a much longer and well-researched Philadelphia Story by the wonderful Bob McNulty, with the very generous assistance of Anne Strohl and Bob Zawislak. Originally published December 13, 2014. Read more @PhiladelphiaStoriesbyBobMcNulty on Facebook, where you’ll also find other great tales from local history.

Please click through for full text with amazing details (and narrative flair!) that bring this important local history to life.

About Philadelphia Stories By Bob McNulty 4 Articles
Philadelphia Stories by Bob McNulty. Lifelong Philadelphian Bob McNulty tells fascinating tales about ordinary citizens and extraordinary events from the city’s long history. Ranging from whimsical to tragic (sometimes in the same story!), Bob’s tales are meticulously researched and bring to life figures and events largely forgotten today. Philadelphia Stories is a dramatic archive that spotlights everyday Philadelphians of all kinds -- men and women, Black and white, immigrant and native-born, many of whom, in Bob’s words, “didn’t have anyone to tell their story.”
Facebook