UPDATE (new takeaways as results have trickled in): Thanksgiving and Christmas came early last month when a wave of results began pouring in from mid-term elections across the country. But it wasn’t the wave we were promised by the talking heads in the mainstream media and those in the far-right cable news bubble for the last two years.

They couldn’t contain their glee at the coming “Red Wave” or “Red Tsunami,” or — as one disturbed prognosticator put it — “Bloodbath.” But even with widespread gerrymandering and sweeping voter suppression efforts in red states, their wave turned out to be a trickle, especially in Pennsylvania.

Hats off to voters all across the state and a big thank you to the candidates, organizers, and voters who worked so hard to make it happen.

Josh Shapiro destroyed Doug Mastriano by 14 points, chipping away at Republican domination in rural counties and turning out Black and Brown voters in urban and suburban centers in Philadelphia and Pittsburgh, but also picking up a surprising number of votes in counties like Erie, Centre, and Luzerne.

“No matter where you come from, who you love, who you pray to, you are valued here in Pennsylvania, and we hear you,” Josh Shapiro told his supporters during his victory speech.

John Fetterman’s victory wasn’t as significant as Shapiro’s, but it was awe-inspiring, given he had a stroke in the middle of his campaign. The Dr. Oz vote was split, with at least some of those who voted for the Jersey resident also voting for Shapiro.

“I never expected that we were going to turn these red counties blue, but we did what we needed to do, and we had those conversations across every one of these counties,” a teary-eyed and humbled Fetterman told his supporters. “And tonight, that’s why I’ll be the next U.S. Senator from Pennsylvania.”

“This campaign has always been for every person who has been knocked down and gotten back up,” Fetterman told his supporters. “This race is for the future of every community all across Pennsylvania. For every small town or person that ever felt left behind. For every job that’s ever been lost. For every factory that was ever closed. For every person that works hard but never gets ahead. I’m proud of what we ran on.”

The news was good in Philly too where Democrats swept the four open seats on City Council. Quetcy Lozada will represent portions of North Philly and Kensington; Anthony Phillips will lead parts of Northwest and North Philly, replacing Cherelle Parker (who’s running for Mayor). Sharon Vaughn and Jimmy Harrity will take over the open at-large seats.

Republicans tried to make these races about crime in Philadelphia and inflation. Although these were important issues, establishment Democrats largely failed to respond effectively. Fortunately, progressive candidates’ messaging on economic issues and criminal justice blunted some of the Republican attacks. 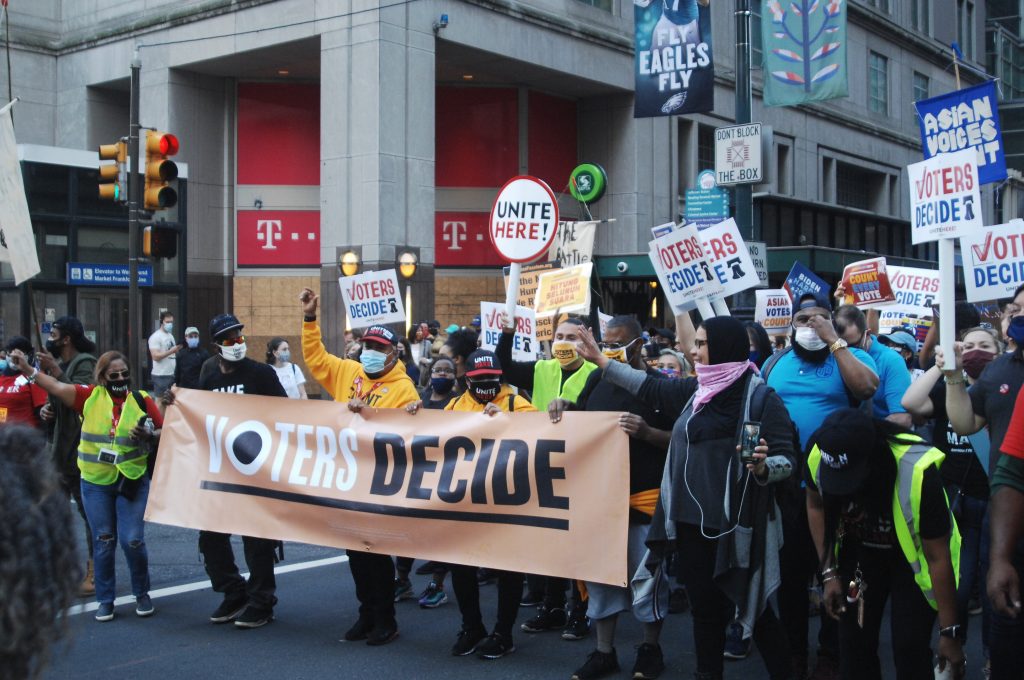 The progressive candidates were more successful because, in addition to targeting urban and suburban centers, they brought their populist economic message out into the state’s rural areas. They connected with people and communities across PA by speaking to the issues those communities were facing in a way that resonated with them.

Candidates took the complaints of the right-wing media and Republicans and told Pennsylvanians what they wanted to do about it. They got behind popular positions like Medicare for All, housing, and a $ 15-an-hour minimum wage.

They also ensured they were on the right side of other popular issues like marijuana legalization, abortion, and gun reform, vowing to do what it took to get these things done for the people, even if it meant ending the filibuster.

“This election was about more than any single candidate or issue,” said Stephanie Taylor, co-founder of the Progressive Change Campaign Committee. “It was an existential uprising from voters who want Democrats to go bigger in protecting fundamental rights, voting rights, abortion rights, economic rights, and the right to exist.”

In the days/weeks following the bulk of the mid-term results, other results in Arizona and Nevada brought more good news with the election of U.S. Senators that swung the upper chamber to the Democrats (Raphael Warnock’s win in GA gave the Dems 51 seats) and Katie Hobbs winning her race against Kari Lake for AZ governor. Even better, election-denying secretary of state candidates all across the country also went down to defeat.

As expected, Republicans took the U.S. House but, rather than the 40 or even 50-seat majority they’d crowed about pre-election, they wound up with a razor-thin majority of nine seats. (As of this writing, Kevin McCarthy is still tap dancing to win enough support for the speaker of the house position from the vast spectrum of right-wing extremists in that chamber, while the Democrats already have their leadership team ready to go with Hakeem Jeffries of New York leading the way. BTW, Jefferies is the first Black person to hold that position.)

Progressives have also helped position the Democrats to take control of the state house for the first time in ten years. With crucial victories in the suburbs, Dems have flipped 12 seats previously held by Republicans and are on track to have a majority in the House. But first, they need to win three special elections to secure that majority: One for the seat of Anthony DeLuca, a Democrat from Allegheny County, who died one month before the election, and two more to fill the seats of Democrats who’ve won election to higher posts in state government. (The special elections will be held in early 2023 and, given the democratic-leaning nature of voters in those districts, it seems likely all three will remain Democratic, giving the party a one-seat majority.)

A Democratic majority would mean fewer bills that need to be vetoed by newly elected Gov. Josh Shapiro, and it would stop state GOP attempts to amend the Constitution with extreme bills like SB 106, which would remove state constitutional protections for abortion, restrict the Governor’s ability to make state regulations, and affect voting rights for Pennsylvanians. (SB 106 will be on the ballot in the spring if they win the state House.)

Progressives didn’t just win in Pennsylvania. Largely, they beat back hate, stupidity, and madness up and down the ballot and across the country. And these wins were driven largely by young people, women, and Black and Latinx women, just like they did in 2018 and 2020. It’s bad news for the Republicans that the youth vote is a growing block within the base of the Democratic Party and is deeply progressive.

Democrats would do well to listen to them rather than dismissing their concerns and ideas; they are the future, after all. “This sends a clear message and roadmap; that going into 2024, Democrats must lean into the popularity of the progressive platform, not write it off,” said Joseph Geevarghese, executive director of Our Revolution. “With progressives growing their margins in Congress, regardless of the outcome of the remaining uncalled races, Democrats need to take note of the powerfully fought and won campaigns, driven by progressive ideals, that galvanized voters.”

His Music is Da Balm

Music can soothe your troubled spirit and heal an injured heart. Local landlord/hip-hop artist Noah Accorsi’s album “Every Day Counts” reminds us that happiness is a choice we make — not just for our own [more…]

(voice of) God is Dead

Hello. We interrupt our coverage of East Falls & environs to bring you this special message: We write like this on purpose. Recently it’s come to our attention that some find our first-person voice… confusing. [more…]