We know her as Purple Queen at Philly press conferences, stepping up to ask candid questions for listeners on PQRadio1.com, and – more recently — her readers in The Local (thanks to WHYY/N.I.C.E). You might recognize her from a powerful mural on the east side of the Municipal Services Building in center city. Entitled “Crown: Freedom,” the work recognizes eight local social justice activists, including Saj “Purple Queen” Blackwell.

This month, she took the bold step from community organizer to politician, when she became the 1st person to turn in over 500 signatures to get on the ballot as the first official candidate for Representative of Pennsylvania’s 10th district created this year in West Philadelphia when the state went through redistricting. As an independent news outlet, of course we can’t formally endorse any candidate; however, as N.I.C.E. partners we’re hopeful for her success and happy to interview her as impartially as possible. 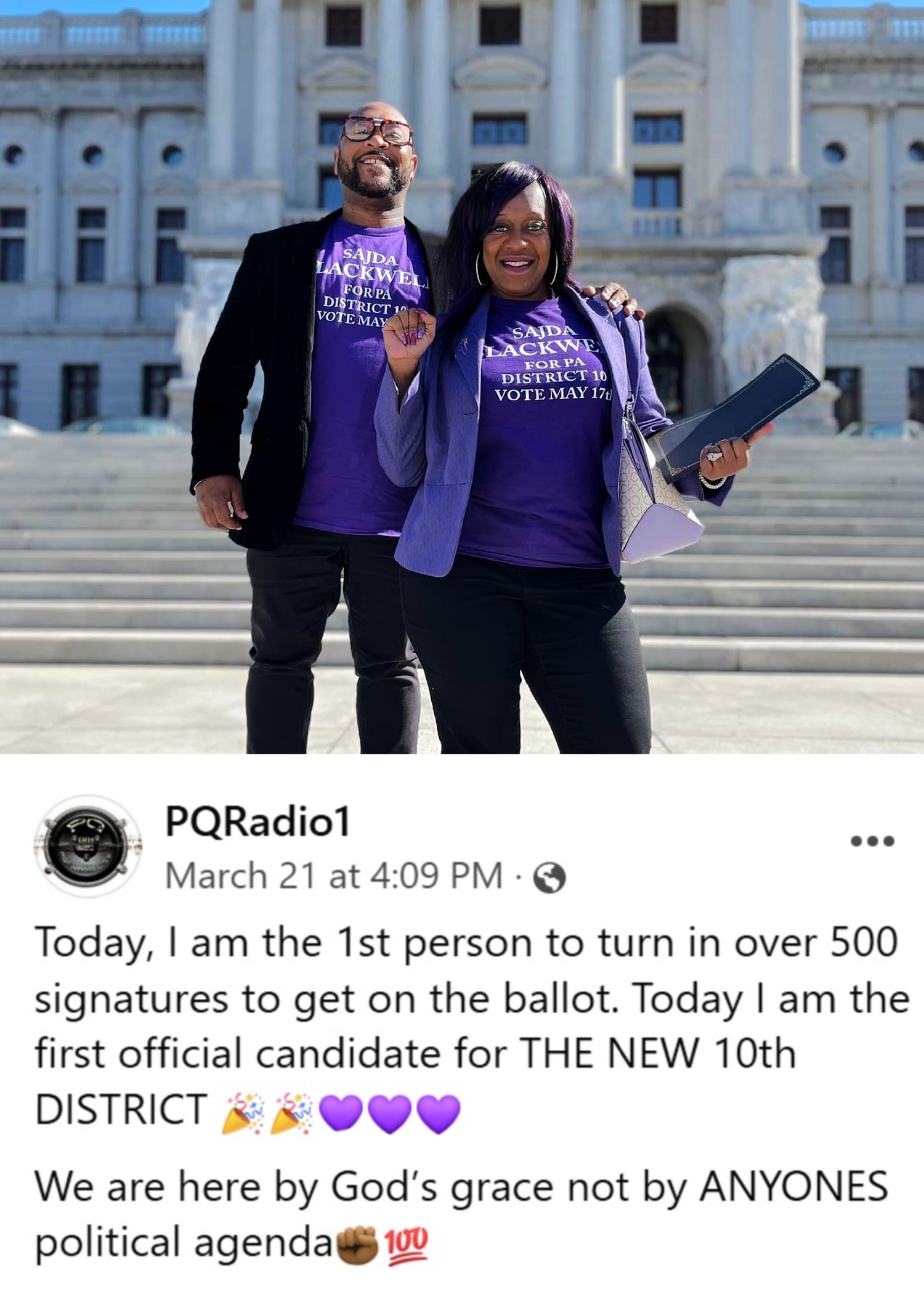 Why “Right now” – what’s all the urgency?

Well, you know, we have been boots on the ground, my husband Thomas Blackwell and me. When the pandemic started, we did food drives and helped connect people to city resources. We went block by block, wherever people were in need. We learned how to partner with other food providers like SHARE, and now we are like a one-stop shop, groceries and everything from baby wipes to pet food.  And I saw how change can be a conscious choice, and a call to action.

This year, Pennsylvania’s district map was redrawn, which in Philadelphia created the 10th district, where I live. So now here’s this opportunity, of course I’m going to seize it. The truth of the matter is, unfortunately, West Philadelphians are not being well-represented in Harrisburg. And their needs are in line with lots of other residents in the city and the state. Unfortunately, the biggest challenge I’m facing right now is the Democratic Party – and I’m a Democrat!

I’m not in the club, though. I don’t support the position that the Party should pick the candidates for new districts like the 10th. That’s unfair! Let the people decide. Here’s a chance to start fresh, it makes no sense to fall back into the same old poli-tricks again. People deserve a chance to choose a candidate that inspires them, that empowers them.

It’s time for community! It’s time for politics and the people to come together for the common good. And we will have change, not now but RIGHT NOW! We’re not gonna wait for the old school network to make things happen.

So where’s the 10th District?

It’s basically on the bottom part of West Philadelphia. It’s from 52nd and Pine, before you cross the street to Logan. There’s Logan Square, Powelton, Walnut Hill, Mantua, Mill Creek. A little bit of Cobbs Creek. And then it goes to the Amtrak station and then over to the Schuylkill behind Belmont.

What are the key issues of your platform?

We’re fighting for public safety, educational equality, poverty reduction, and senior rights/advocacy. Specifically I want to mention the Safe Camera program, already in state legislature, but I’d like to upgrade it into a coordinated effort to provide neighbors with high-resolution security cameras, which will connect with the Philly PPD who can use the footage to prevent and prosecute crimes. It’s like a virtual police force, keeping an eye on things.

Often just the cameras are great deterrents, but another way they keep communities safe is by providing a digital witness so that real flesh-and-blood people don’t have to tell on their neighbors. They don’t have to show their face in court, and expose themselves to possible threats and payback.

Another thing I’d like to highlight regarding education is financial literacy. Get this into our schools, so our kids grow up knowing how to budget, how to open a bank account, how to save for retirement. Help teach seniors, too – they need to learn how to get their estates in order without getting tangled up in deed-stealing scams, which are a problem.

What does a state rep do, anyway?

Every stage of life has concerns that I think a state representative is in a unique position to address. For example: 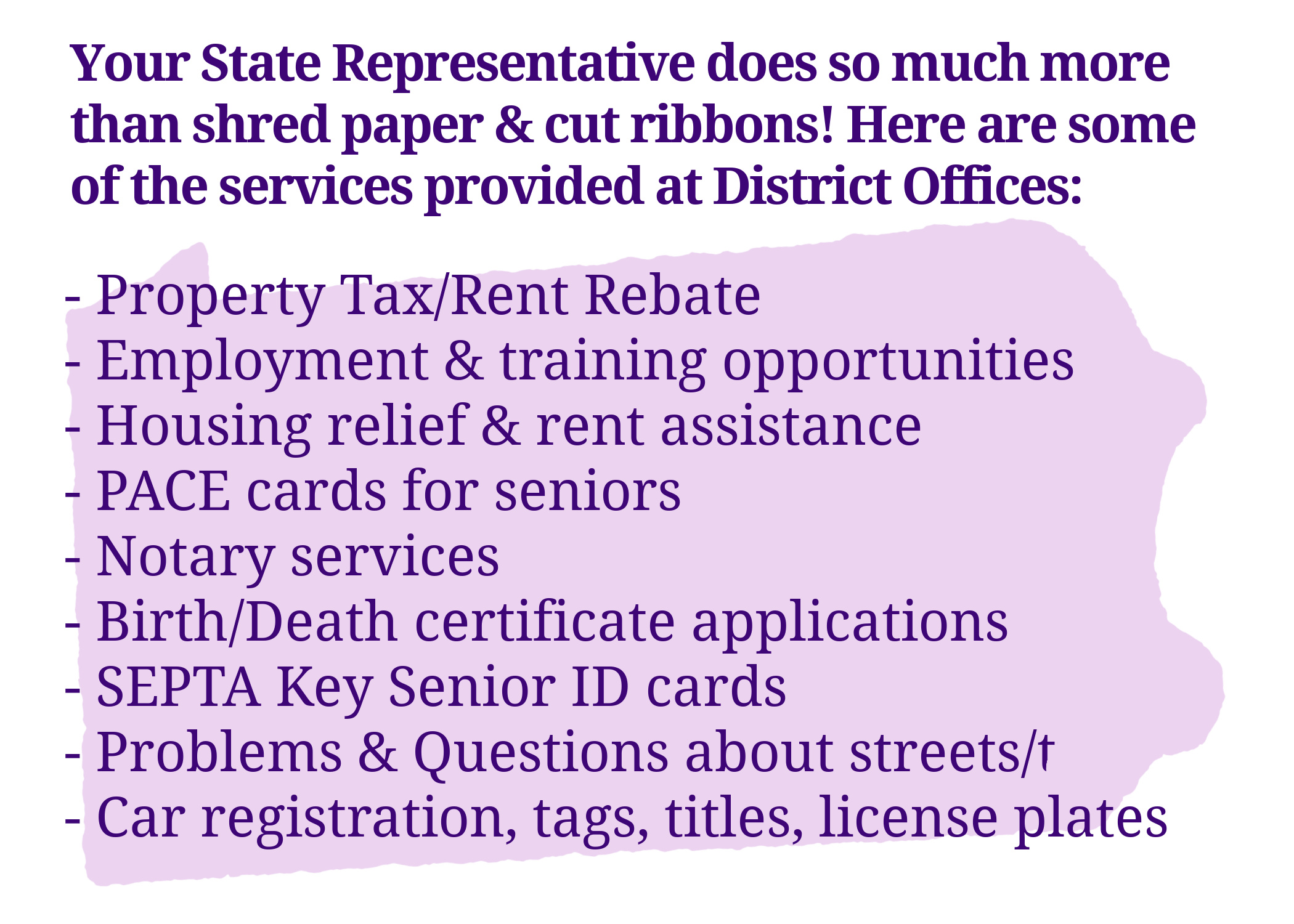 Now, technically, it’s not a state reps job to fight for brighter lighting on a particular street in Philadelphia. But as a neighbor? Yeah, that’s a priority. So from Harrisburg I will make sure that my local officials will have the funds they need to keep my community safe as possible. See how that works?

Your state rep is more than just paperwork and shredding events. They’re your voice in Harrisburg, where state and federal dollars are being handed out, and new policies are being adopted that could affect your life in many ways. Your state rep makes sure that nothing changes without your wishes being heard on the issue. School, housing, social inequities, overdevelopment, traffic, everything! Your local elected officials can hook you up with resources and information you can use to improve your life, your communities.

Does your experience as a grassroots broadcaster overlap with your new role as a politician?

This will be a very blessed and easy transition, because my people know me, and they trust me. That’s why politicians and important people in Philadelphia like to come and talk to me, because they know if I’m talking to you, that I’m going to get the truth out of you, and that they’re going to be able to trust that information. In fact, many leaders in the past have tried to use and abuse me, to reach my audience on my platform of trust.

As I said before, we will not engage in backdoor poli-tricks! We will fight for truth, for transparency and accountability. We will uphold these standards. And we’re doing the work. We’re bringing forth a new type of leadership, that listens and answers to the people. My platform is Real People, Real Change, Not Now but Right Now! We’re getting rid of bad politics in West Philadelphia. We may not have the money, but we got the people and we’re coming.

Who Is Saj Purple Blackwell?

I’m a wife, mother, youth mentor, community organizer and crime prevention advocate. Co-founder of the Blackwell Culture Alliance which feeds over 2,000 families a month. I have lived with my family in Walnut Hill for many years, but I also spend a lot of time at City Hall, interviewing Mayor Kenney, DA Krasner, Sheriff Outlaw, and other key players in city government for my internet radio station, PQRadio1 — over ten years and still going strong.

True Story: if elected, I’ll be only the second Muslim woman in the whole PA House, since 2019, when Movita Johnson-Harrel was sworn in. Learn More: 484-775-0772 / Sajdablackwelldistrict10.com

Purple Queen on the scene, with a double-dose of Her Majesty’s beneficent broadcasting. [more…]

The life-changing power of Purple: a story of positive energy & empowerment [more…]