Step aside for a new generation of Social Justice warriors

It does not matter who is selected as president figure head by the electoral college and the people's popular vote. What matters is that people vote to take the people's house (congress). The house /Congress is where we are the representative. Secondly we need to vote to take and control our taxes and how they are spent by controlling the purse in the Senate. The senate is where legislation from house of representatives/ Congress- the people house becomes law. We need to understand this process as our primary reason to vote. The Congress is in place for you and me to create legislation that speaks to our needs that will be passed up to the Senate and become law. When this is mastered we control the economic 👛. It does not matter who the president is he can sign it on not. The Senate can override his veto. Understanding this civic process can bring true transformation as to why and how to vote. A president is a symbol head but they really have no power, Republican or Democrat. They are two wings of the one bird. We the people are the inner workings of that political bird the consciousness, the blood, the water, the bones, the eyes, the mouth and the voice and direction of the bird. So Vote to keep the inner workings of that political bird healthy and performing at its best. Vote for 2/3 majority members in the House and Senate members so that your interest and the interest of the moral majority are achieved.

No disrespect to my peers and elders when I say this: shut the hell up.

If you’re more upset about law breaking and window smashing than you are about fellow humans being killed and brutalized, I can’t help you. As far as I’m concerned, you’re part of the problem. No, actually – you ARE the problem. Because you’re making excuses for a sick system we all know is corrupt and abusive.

Denial is a powerful thing, and so is white supremacy in America. Thanks to your ignorant ass. Which you need to sit down, if you can’t stand with this young generation who has every right to create the world they want to live in. And fight as hard as they need to, to get it.

Our children aren’t rising to start a race war – they’ve come to finish one! For the first time in American history, young people are demanding their country be held accountable for the sins of our past. They refuse to go along politely with white supremacy. They are calling out their parents, teachers, neighbors as collaborators. Policing the police! And even punking the president of the United States.

Darnella Frazier who filmed George Floyd’s murder was only 17 years old. She was just walking down the street, saw the commotion, and immediately acted. Just a young girl, but she stood up to those four policemen because she knew her Rights and she also knew what was right. As a kid she was powerless to stop them but as a “Zoomer” she had tools to take them down. 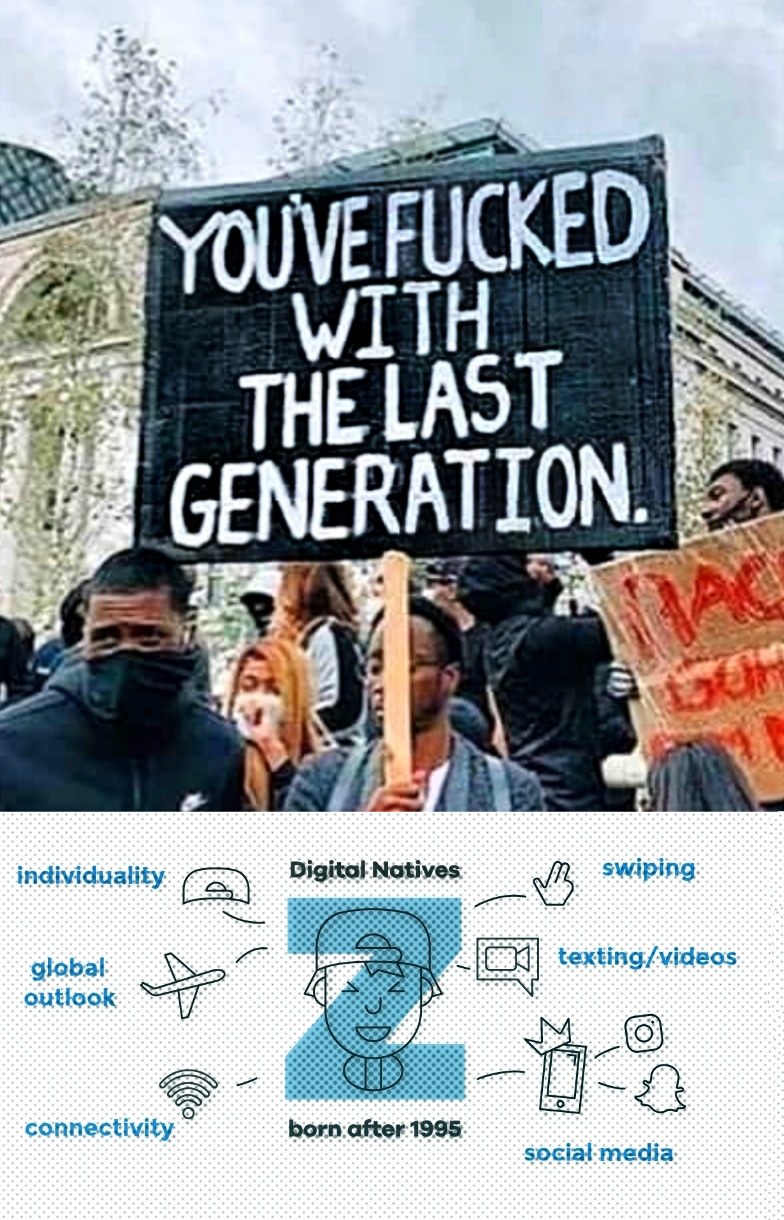 Zoomers or Generation Z or whatever you call the ones after Millennials – they’re a growing force to be reckoned with. Born between 1996 & 2010, they’re now the largest generation of Americans – 72+ million people. They’re also the most diverse: 48% identify as non-white. Almost half! Other stats that make me proud:

Across colors and genders, they’ve got each other’s backs against an Establishment they have been groomed to rail at. They’ve marched for the climate and for #metoo, they’ve staged walk-outs to protest school shootings. It was only a matter of time before they realized the killer was calling from inside the house…..

This new generation is exactly the opponent the white male patriarchy has feared since their reign of terror and exploitation began. These kids are angry about America’s sociopathic past and the lies they’ve been fed about our country. They feel no allegiance to a flag countless racists hide behind. They know they’re being sold a failed state, a trashed planet — and they won’t have it.

Already, we’re seeing change. Monuments are coming down, new laws are on the table for a lot of cities, including Philly. As a lifelong Germantown activist, I feel our work here buoyed by their youthful energy. I can’t remember the last time I’ve felt so optimistic about the future.

For all of you throwing around negativity about the Black Lives Matter movement, I say to you we will not be bothered by your lack of faith and imagination. Your sympathy for our oppressors does not deter or even affect us. We will keep moving forward to the goal making the promise of our ancestors a reality! 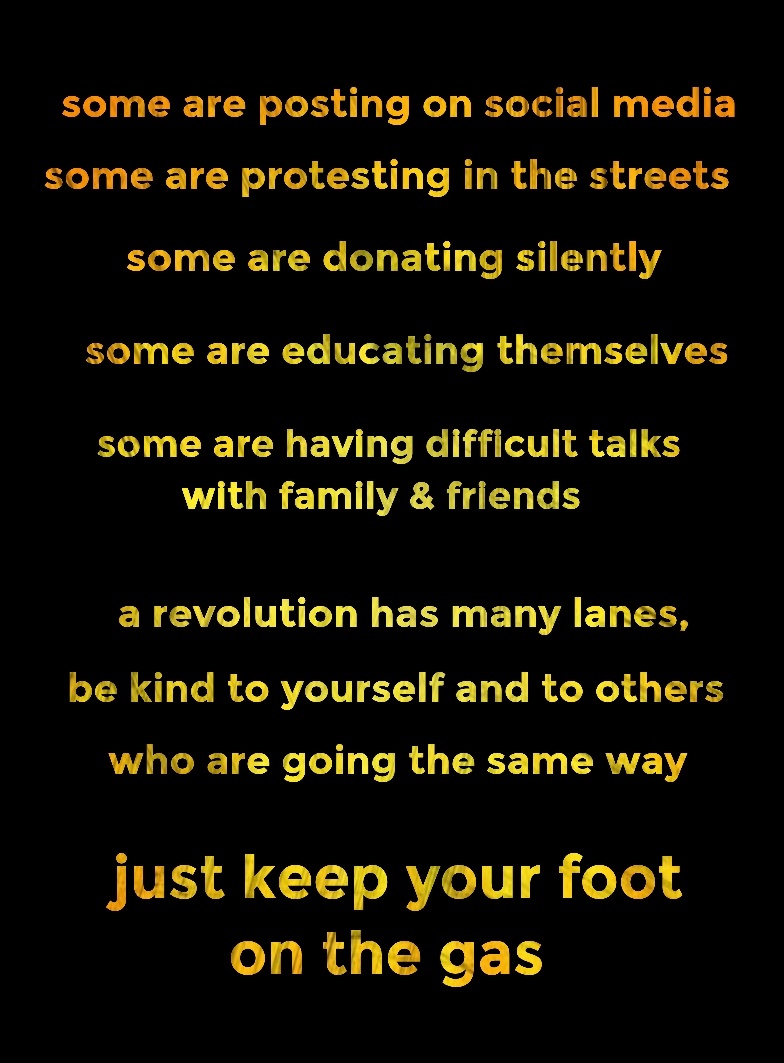 An Afterword, my friends:

The property damage that boiled over from the first heated protests in the wake of George Floyd lasted only a few nights, but the demonstrations have continued — peacefully — for weeks! More are coming, including a huge March on Washington DC this August 28th.

Where’s the media coverage about all this peaceful protesting? Why is it only news when there’s violence? Does our government want us afraid and angry? What’s in it for them if we are?

Let me know what you think in the comments section. 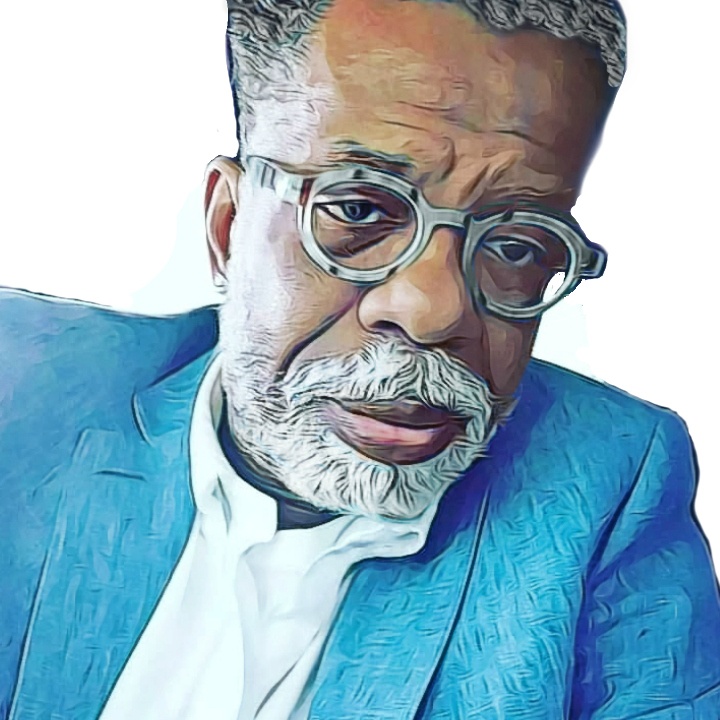 On the Right Frequency

Let’s tune in as our tattooed contributor’s colorful story continues at the Philadelphia Convention Center.  [more…]

Off-leash play for local pups? Get your comments in before the first planning meeting January 24th!  [more…]