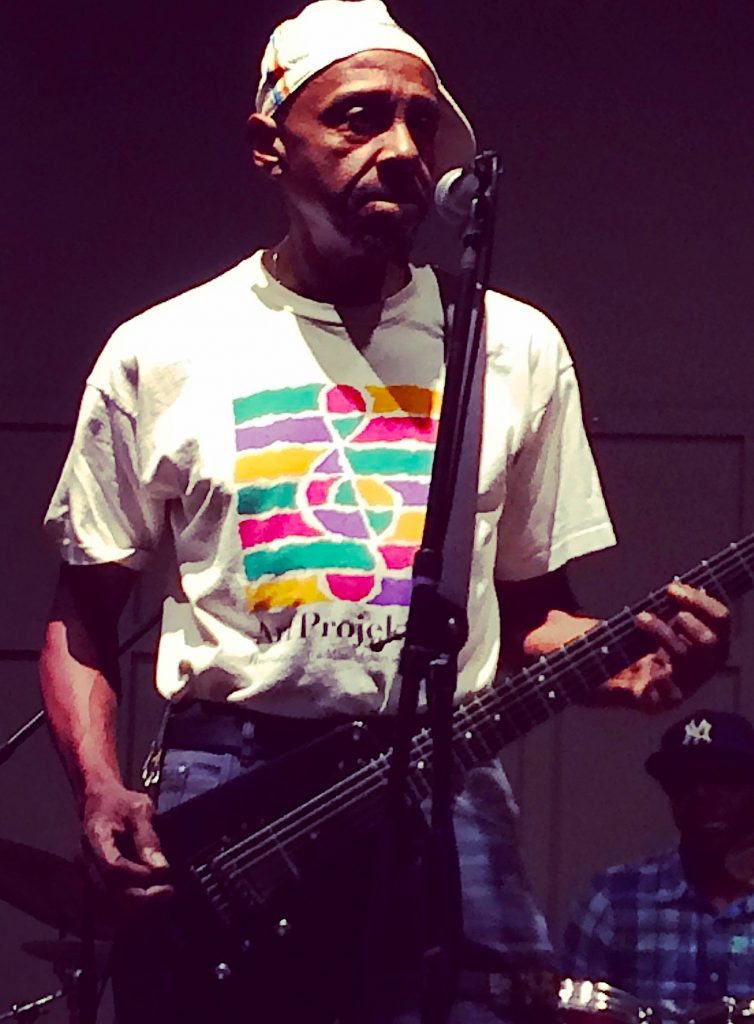 Ellerbe the guitarist for popular organist Charles Earland, the esteemed Sun Ra Arkestra, The Trammps and other top-40 bands, also toured with jazz legend Ornette Coleman, the founder of “free jazz,” and his band Prime Time.

“Ornette was the first American instrumentalist to record an album under a major record label, in an avant-garde, improvisational manner, using elements of swing jazz,” Ellerbe said.

Ellerbe, known for his signature “weird looking guitar,” a black Stratocaster with no neck, came to be known in the jazz world as “the Harmolodic Kid” for his unique style and intricate skills. Today, Ellerbe heads his own ensemble, Matrix 12:38, which he pridefully describes as, “a modern, authentic version of Ornette Coleman’s electric band Prime Time.”

Born in Philadelphia in 1950, Ellerbe was always drawn to music. He was especially inspired by R&B and rock (despite Doo Wop being the popular Philly sound of the time). After watching a friend play guitar during a 1964 performance, he became instantly hooked on the instrument and immersed himself into the music world at the age of 15. He gratefully credits the guitar with saving him from the streets.

“Having something to practice kept me at home and out of trouble, not just out hanging on the corners and doing nothing,” Ellerbe said. Despite Ellerbe’s humble beginnings in an economically depressed neighborhood, he says the local music scene at the time was rich. “Philly’s music scene was very active around my stomping grounds. Uptown Theater was down the street and brought in national acts,” he stated.

In addition to frequenting the Uptown and other local venues, Ellerbe began listening intently to a diverse array of artists as inspiration, from jazz guitarist Kenny Burrell to Burt Bacharach. However, “Jimi Hendrix changed everything,” causing him to fall in love with the loudness and distortion in hard rock music.

Ellerbe, originally planned to be a studio arranger, studying music composition at Combs College of Music in Philadelphia. But his journey would take many unexpected turns. It began when a friend who played trombone for the Trammps, best known for their hit “Disco Inferno,” advocated for Ellerbe as a guitarist for the band.

“I got the call and was touring within two weeks,” Ellerbe stated. While with the Trammps, he was also hired by famous organist Charles Earland. Although his time with these groups were short lived, it was the beginning of many opportunities for Ellerbe.

In 1974, Ellerbe’s neighborhood friend and well-known bassist Jamaaldeen Tacuma, who was already a member of Ornette Coleman’s Prime Time, asked Ellerbe to audition for the jazz ensemble. Setting aside his initial hesitation to play jazz instead of the hard rock he loved and was accustomed to, Ellerbe seized the opportunity.

At the conclusion of the audition, held in Coleman’s legendary Prince Street loft in New York City, Ellerbe was approached by Coleman, who simply uttered the words, “Do you have a passport?” Ellerbe, confused as to why a jazz musician of Coleman’s caliber was interested in a rock guitarist such as himself, reminded Coleman, “I don’t play jazz.” Coleman only responded, “Okay.”

With those four words, Ellerbe’s fate and lifelong relationship with Harmolodics, a jazz concept where harmony, melody and rhythm are all equal components of the musical composition and performance, was born. The Harmolodic approach not only revolutionized jazz, it also transformed Ellerbe’s life. The star, whose light may have otherwise been dimmed on the rough streets of Philly like so many of his peers, was able to shine bright for audiences internationally.

After 15 years with Prime Time, Ellerbe was a member of the established fusion act Sun Ra Arkestra for several years. He also began teaching music at The Clef Club, a cultural center in Philadelphia where he still teaches to this day. Ellerbe continues to work closely with The Philadelphia Jazz Project, which is a special initiative to support, promote and celebrate diverse elements within the Philadelphia jazz community.

In 2000, Ellerbe created and began performing with his band Matrix 12:38, a modern rendition of Coleman’s Prime Time.

Recording dates for Matrix 12:38’s first album, as well as performances are currently being scheduled in coordination with Philadelphia jazz station WRTI. Ellerbe is anxious to reintroduce authentic, Harmolodic Jazz to the world, especially since the loss of its founder and Ellerbe’s mentor, Ornette Coleman, in 2017.

“When I come out, it will be brand new, unpredictable,” Ellerbe confidently stated, “They didn’t call me ‘the Harmolodic Kid’ for nothing.”

About Leah Matthews 2 Articles
Leah Matthews was born and raised in South Philadelphia, where she still resides to this day. She lives with her husband of almost 20 years, their daughter, Giana, and their dog, Seven. Currently, Leah is an honor student studying Mass Media at the Community College of Philadelphia. With a lifelong passion for writing, she anticipates becoming a journalist upon graduation and authoring a book someday.