Wait, what? A&P has a Historical Society? The Great Atlantic & Pacific Tea Company has been around since the mid 1800’s — these guys pretty much invented supermarkets, and have the ephemera to prove it. Curator and society president Walt Waholek keeps an amazing collection of neat old stuff that literally makes me squeal out loud when I recognize it.

Dunno what it is, but I’ve got a thing for supermarkets. They’re just so… abundant! Anything a person could want, practically, in endless variations. Colors and pictures and logos fighting for attention. I feel so wanted there. I overbuy, always, and am a sucker for impulse items — but then, how much trouble can you get into, “splurging” on food? You are what you eat, after all. 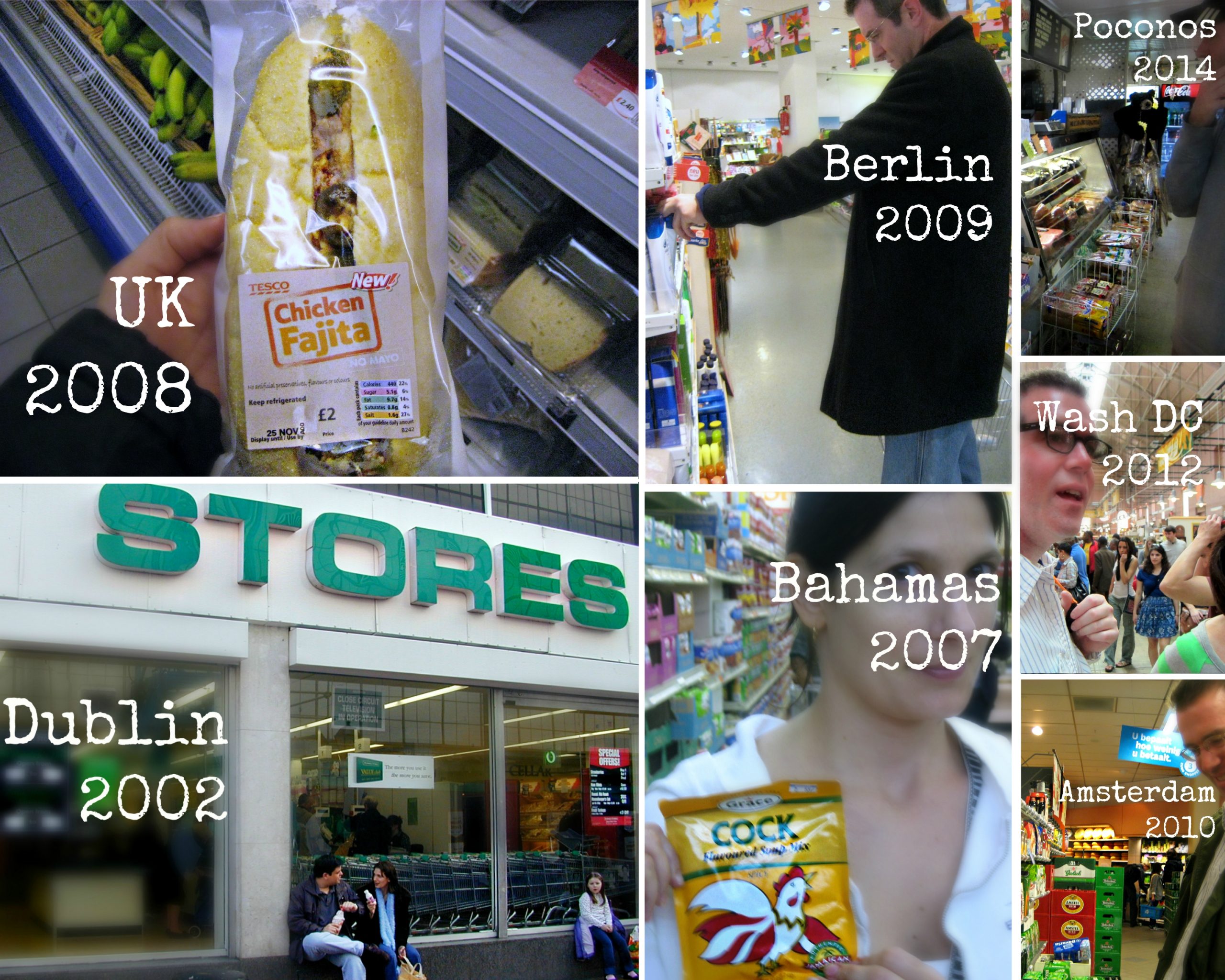 You can learn a lot about people, by what they eat.  Whenever I travel, my first foray out always starts in the closest market, to see what the locals are eating (and what they’re paying). There’s usually some free community rag for grabs, and maybe a bulletin board with events posted or interesting services offered. A grocery store’s a quick study on the regional mindset. 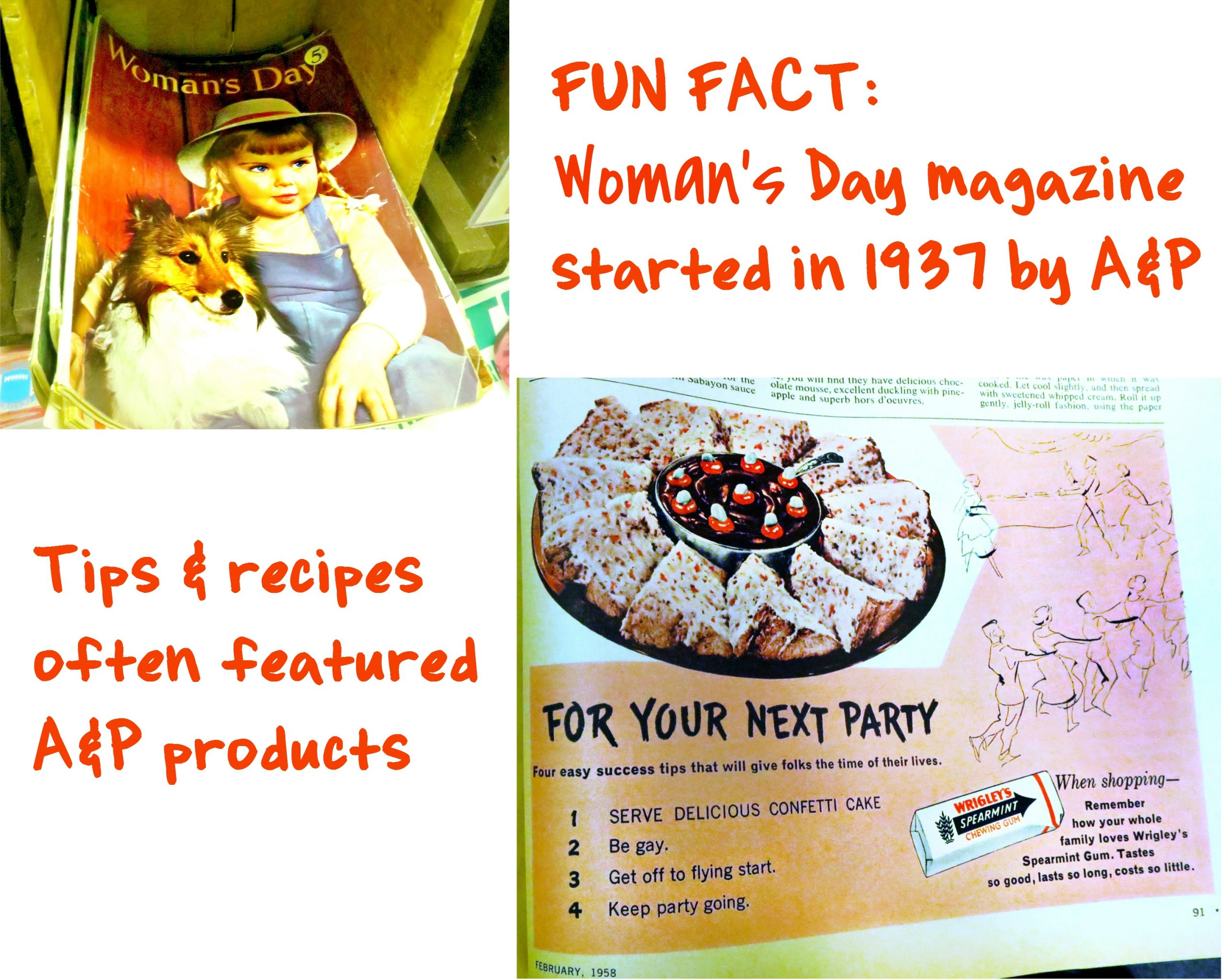 Supermarkets are hubs! And they’ve always been, historically, organically. Because no matter who you are or where you live… everyone eats. Throughout its 150+ year history, A&P has appealed to the hungry masses, pioneering countless marketing & promotional operations — from toys to trading stamps to publications like Women’s Day magazine and even the first music show on radio. 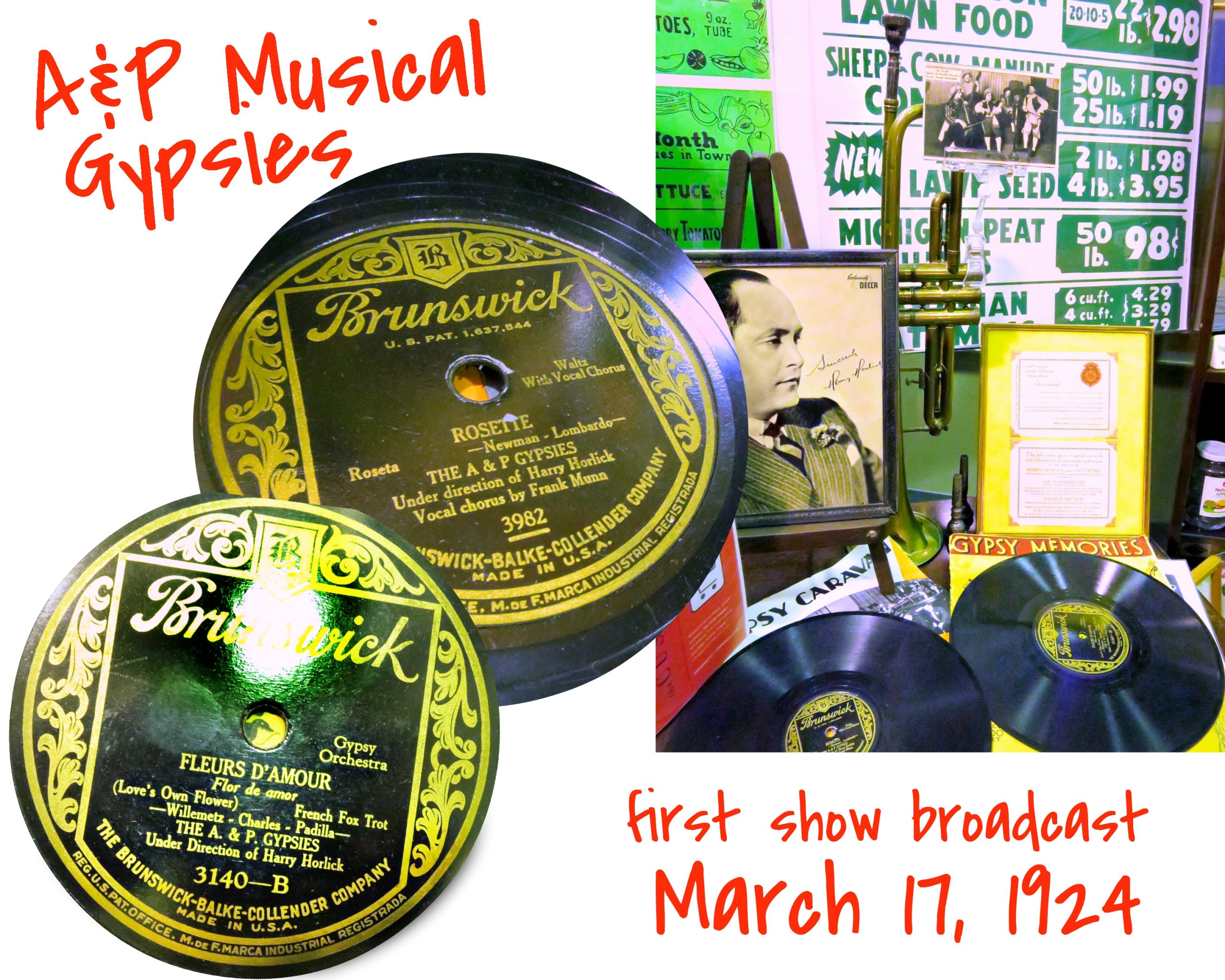 So when Walt told us they were moving, we jumped at the chance to tour through this amazing collection before it’s boxed up for a new exhibition space. We made an afternoon of it — kidnapped lifelong Fallser and all-around good sport Paula Holesworth Dougherty. “My mother worked at A&P!”  she told us when we filled her in on our Friday plans last week. Why yes, she’d love to join us on a little field trip down memory lane… 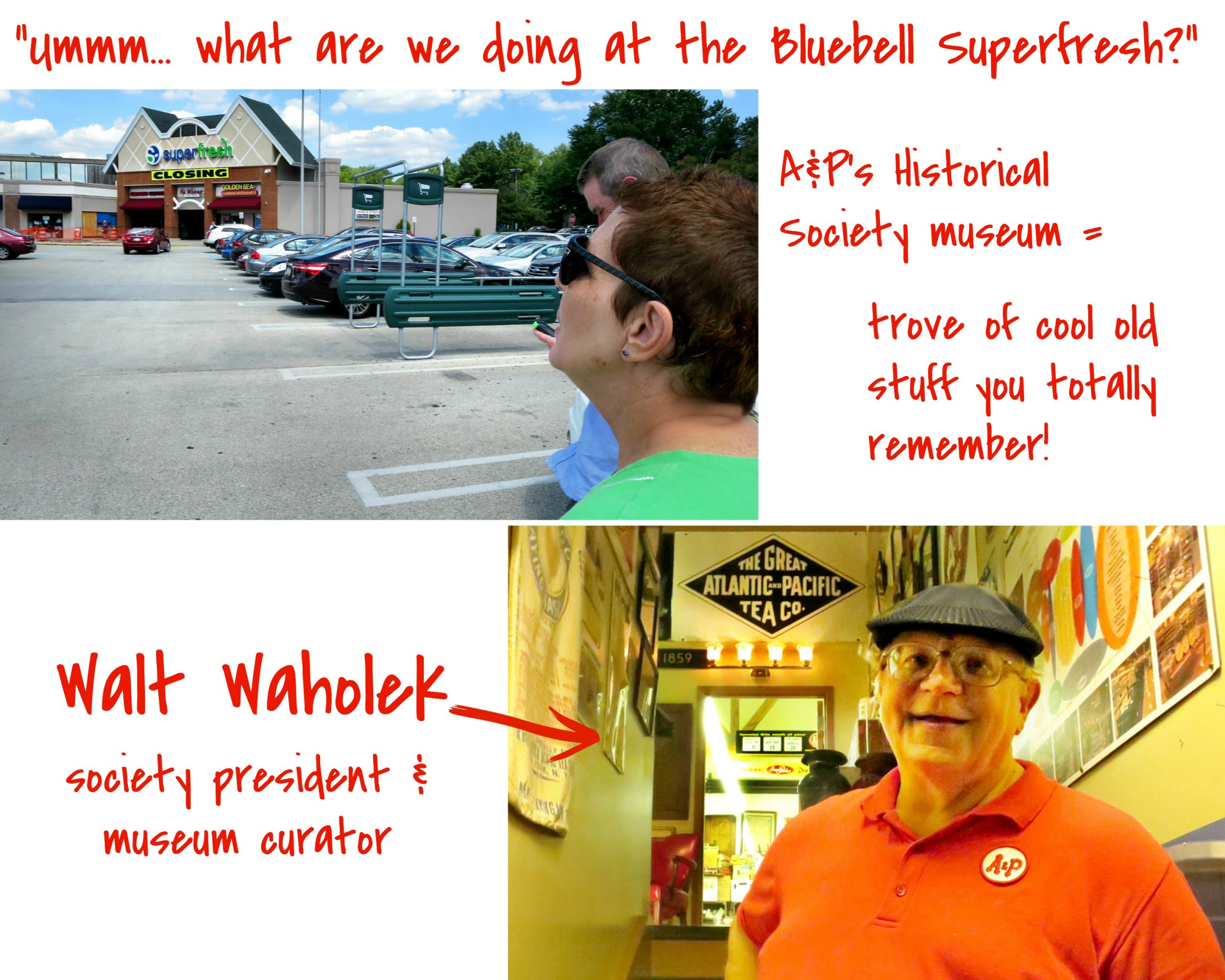 Except, we took her to the Bluebell SuperFresh, ha.

At first she was all, “Is this some kinda joke?”  but soon Walt greeted us and led us to his vintage wonderland up an unassuming stairway near the employee break room & time clock.

We spent hours looking through his collection, and hearing all the stories behind products and services we now take for granted as commonplace. Back when A&P was founded in the 1850’s as the Great Atlantic & Pacific Tea Company (which also sold coffee), most people visited several markets daily for their needs. A&P operated as a retailer offering wholesale prices — and also china & glassware with the purchase of their products. They also developed a robust mail order business.

Around 1880, Congress enacted new tariffs on coffee & tea, so A&P started selling sugar. They soon added (and branded) their own baking powder. From here, they soon offered canned milk, spices and butter.  With the inflation of food prices in 1912, A&P switched to a no-frills format where customers did their own shopping and brought purchases to the manager for tender. Profits soared, allowing A&P to expand their inventory and their branded product line. They also formed partnerships with suppliers like Cream of Wheat, the country’s biggest breakfast food manufacturer at the time.

By 1930, the first “supermarkets” began offering a remarkable choice of products plus local meat, produce and dairy. The 1950’s and 60’s were a “golden age” of modern shopping and convenience — indeed, items from these decades drew our attention most during Walt’s tour.  Paula seriously flashed back to shopping trips to the Bala Cynwyd A&P with her grandfather, growing up: 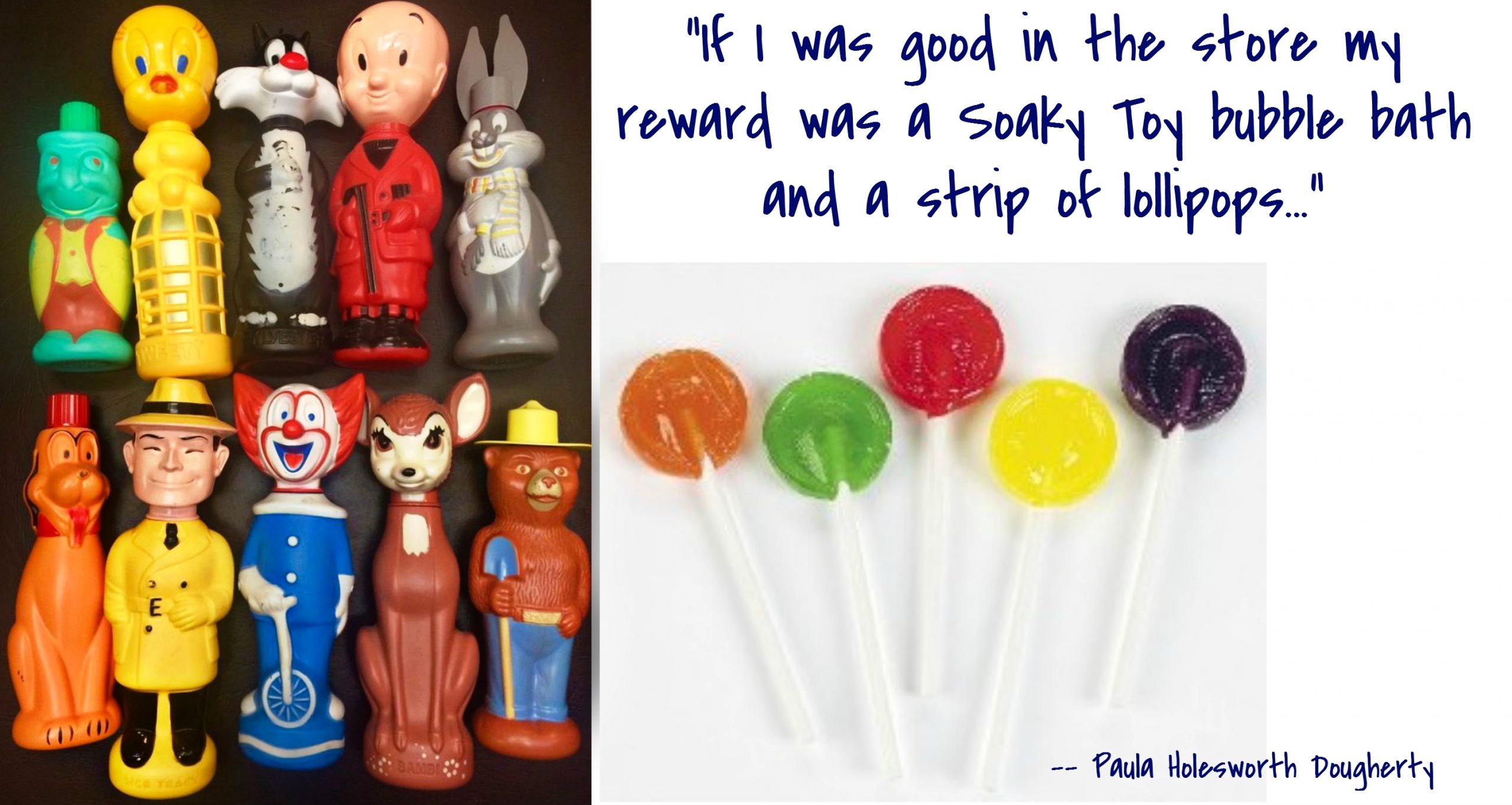 “My grandfather did all the marketing and I went with him to give my grandmother peace for a few hours. We hit A&P first. I admired the fire trucks. Big ones! Maybe four over the produce counters. (Yes, I got one for Christmas, Santa was good to me!)

“Anyway, if I was good in the store my reward was a Soaky Toy bubble bath and a strip of lollipops to hang in our kitchen. I could have one a day — I think there were 10 in a strip.

“After the A&P we would drop off our bundles at home and then head out to Acme for meats. According to my family, they were the best.” 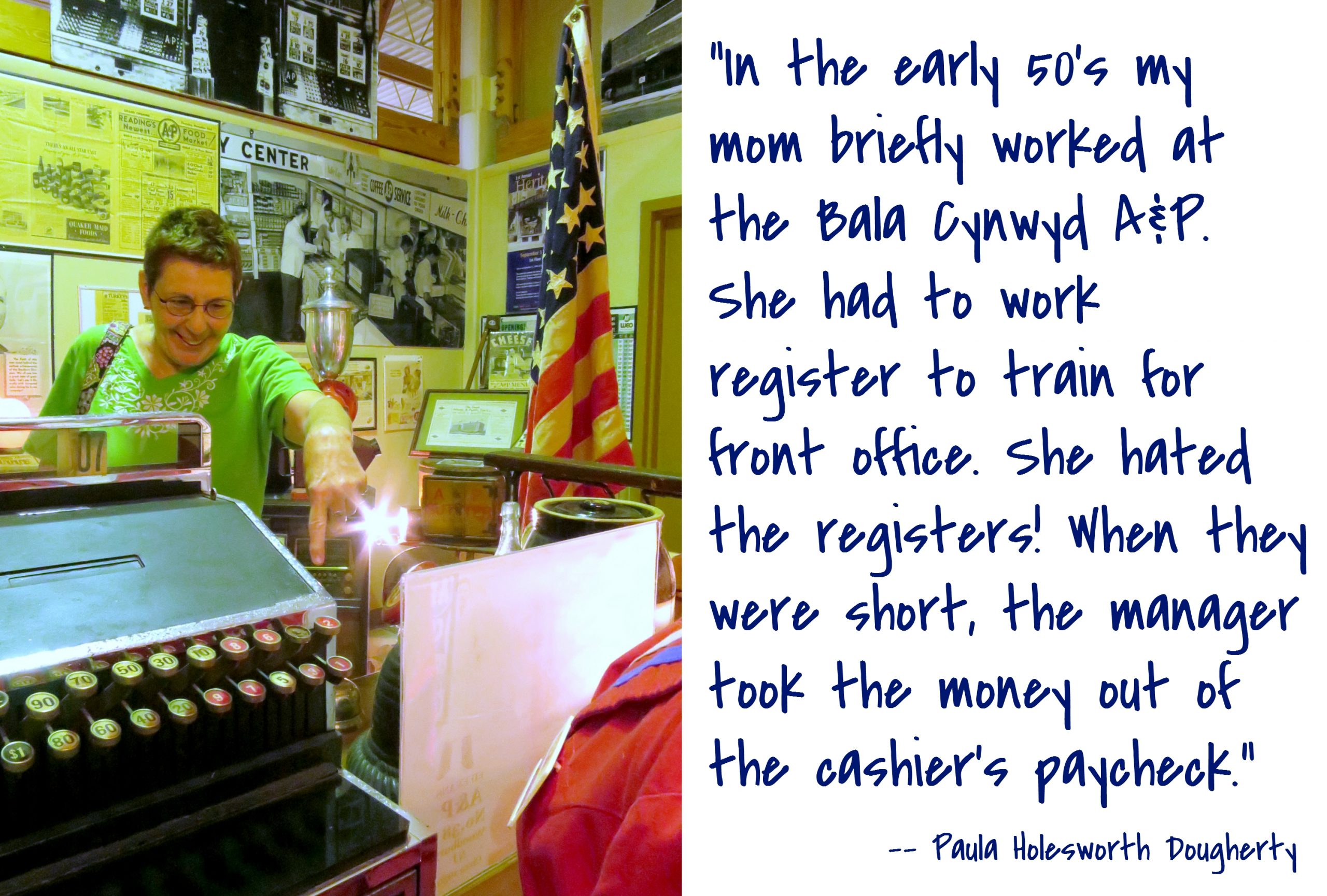 “Yes, my mother was a book keeper and for a short time in the 50’s she worked at the A&P. she had to work register to train for front office — she hated the registers. When they were short, the managers took the money out of the cashier’s paycheck.

“One day my mom accidentally over-processed her hair — yes, it was a beautiful shade of orange. She tried to hide her hair under a bandana at work but of course the manager made her take it off. lol Her first customer that morning was a regular with his school-age daughter with him. The kid kept laughing at my mom’s hair! The dad was embarrassed, rushed out of the store. My mom quit that day! I think she was there maybe two weeks, total!” 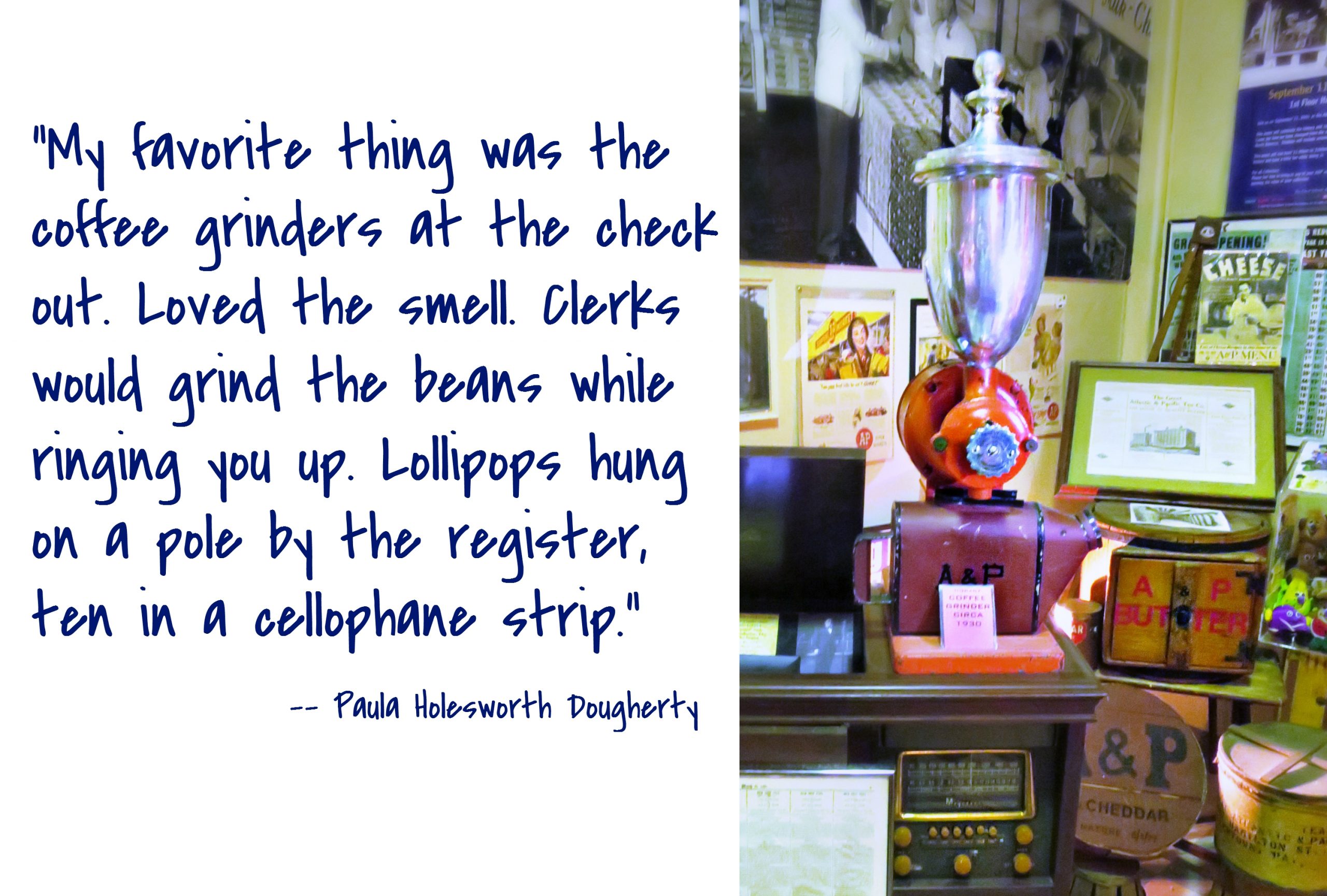 “My favorite thing was the coffee grinders at check out. Loved the smell! Clerks would grind the beans while ringing you up. The lollipops hung on a pole by the register. I always got the lollipops, and shared them with my friends and my uncle. Fun times. Simple times.” 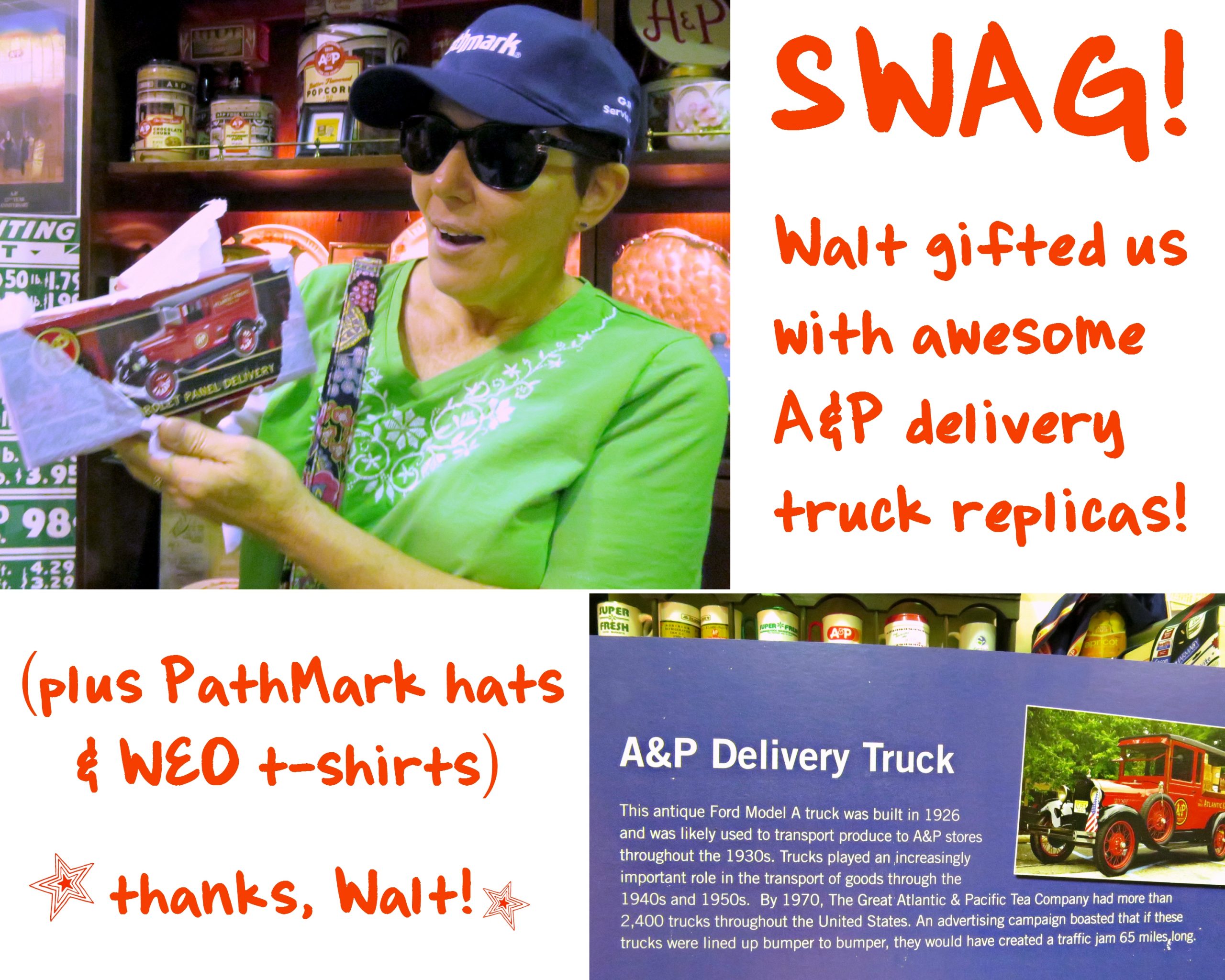 Walt didn’t send us home empty-handed — we made out like bandits with promotional swag like mugs, hats, & t-shirts, and also he found us each a die-cast 1920’s delivery truck, new & boxed!

Walt shared exciting news about the A&P Historical Society partnering with other supermarkets to curate and combine their unique collections. Separately, they tell the story of a company’s rise & growth through changing times. Together, they’ll help paint a “big picture” of food consumerism in the United States — how we learned to feed ourselves, and who we became because of it.

Here’s to supermarkets! And stay tuned to find out how you can view Walt’s incredible stash of vintage memorabilia, and learn all kinds of neat things about real life in early America. 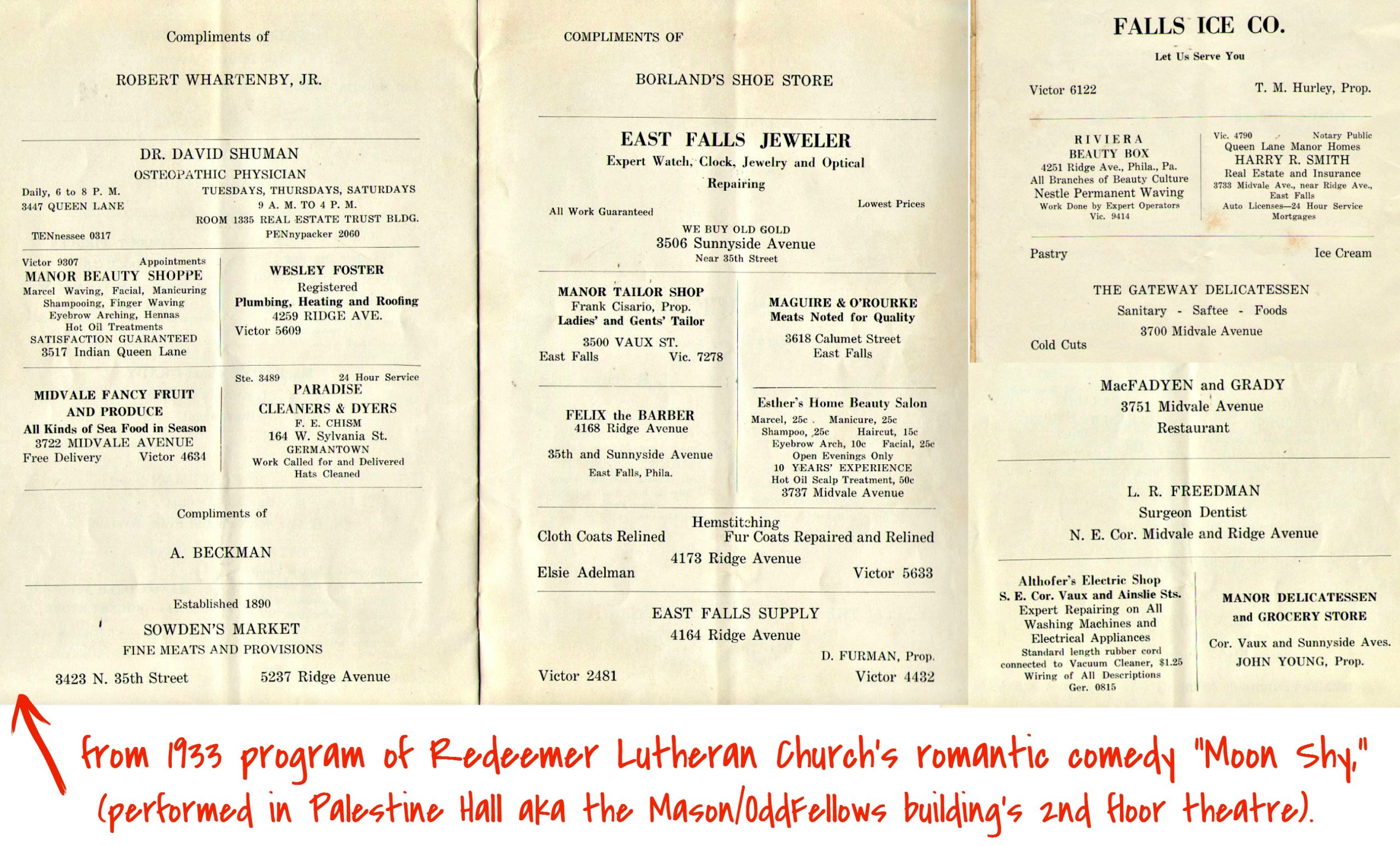 The streets of East Falls used to buzz with businesses — this list of local advertisers from a 1933 theater program includes ELEVEN markets selling fresh produce, baked goods and household supplies. By the 50’s these shops were being replaced by big suburban chains like A&P & Acme, as now these household names are losing ground to Amazon and other to-your-doorstep discounters.

Who knows? Maybe supermarkets as we know them will soon be a thing of the past? How awesome that we’ve got folks like Walt and the A&P Historical Society around, preserving some of our earliest, happiest memories. As the collection’s pair of Campbells Soup Kids dolls might say, the work these guys are doing is “MMM mmm good.” 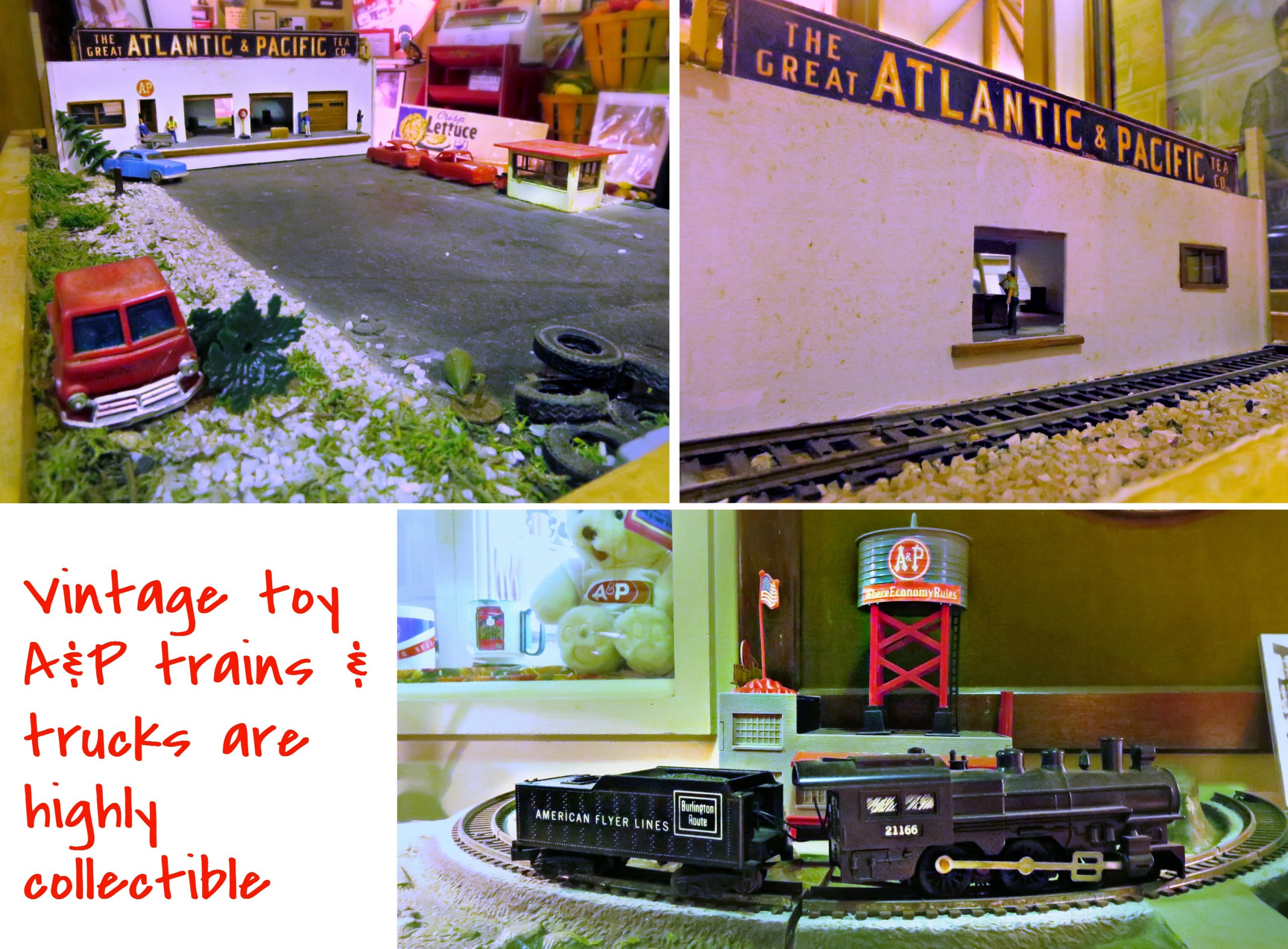 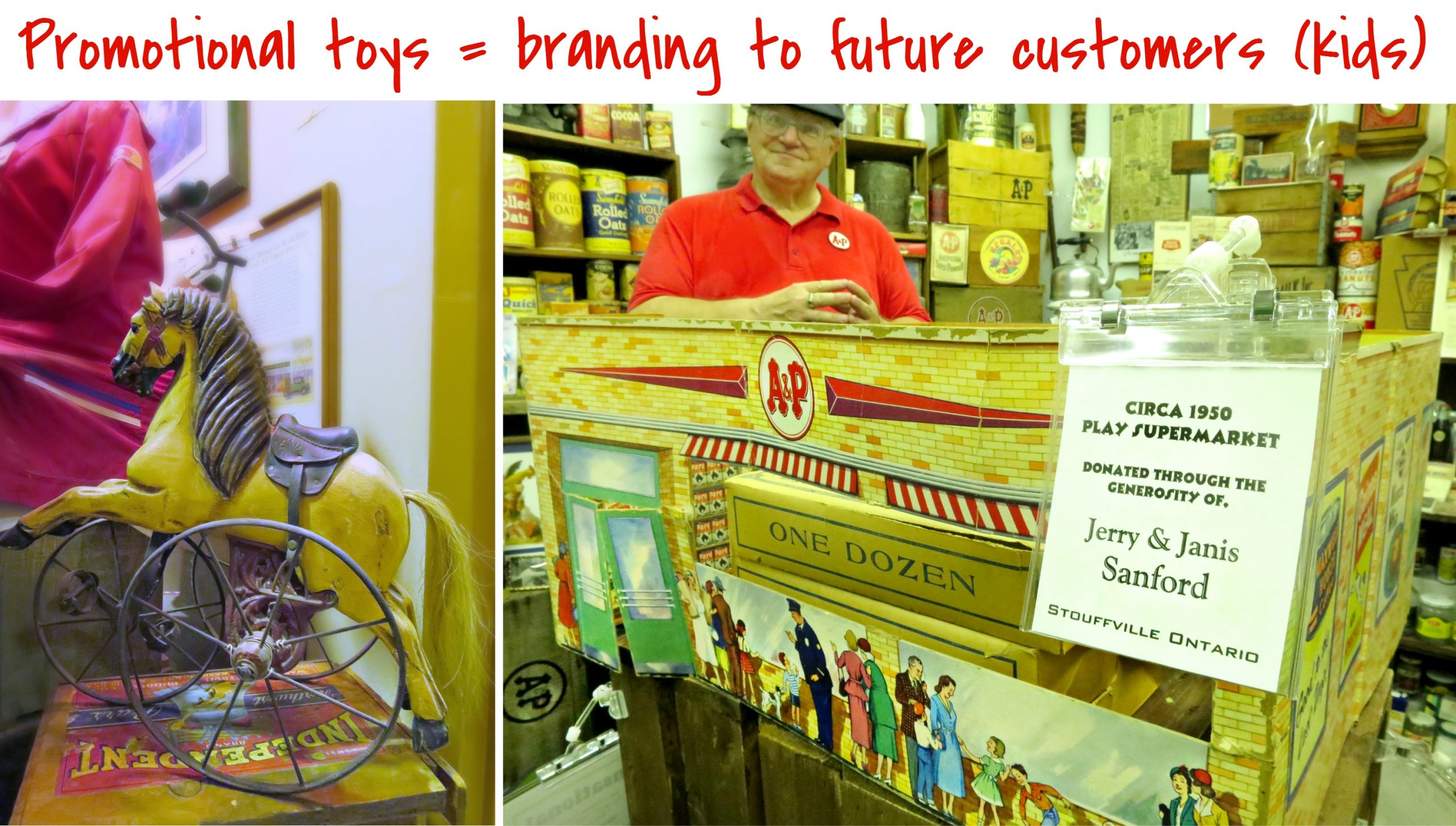 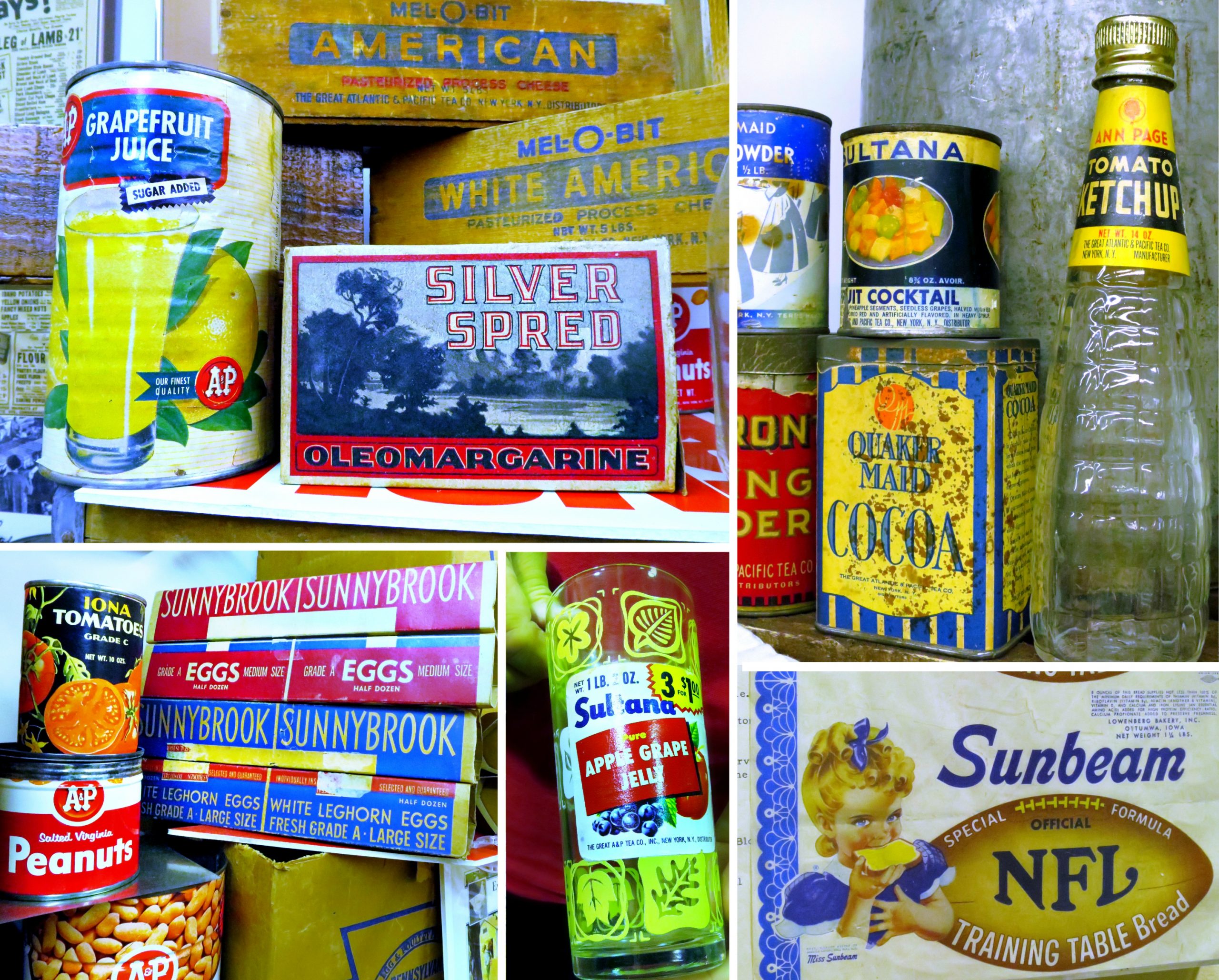 These commercials from the 70’s, above, gave us a giggle (from APHS’s youtube channel).

FOR MORE INFORMATION:  Contact Walt Waholek via the A&P Historical Society 1921 Ripley Street, Philadelphia PA 19111 or email him through editor@EastFallsLocal.com. We first met Walt digging for a privy on the old Hohenadel Mansion grounds, where he supplied some historical input. Really nice article on him & his grandson (on coin collecting, scouting & baseball) in the Northeast Times a few years ago, too.

PS:  Paula Holesworth Doughtery is a Licensed Massage Therapist now taking private appointments in East Falls and surrounding areas. I hear you can tip her with Not Your Father’s Root Beer…  😉

Moving On Up in East Falls

Upper East Falls? Lower? What does that even mean? A look at our history provides a peek at our future. [more…]

HISTORY MATTERS: Put a Ring on It

If you’ve ever wondered about East Falls’ “castle” on Kelly Drive, Joseph Minardi’s got all the scoop on this Victorian riverside party spot.  [more…]

Hopped Up for Historic Return