Along with fresh corn, longer days, and the smell of cocoa butter, one of our favorite summer delights is keeping cool with a matinee in a dark, aggressively air-conditioned theater, preferably with an action-packed, Hollywood blockbuster. For the last 20 years, Marvel has kicked off an unofficial superhero movie season with a May movie release, after which it seems like every weekend there’s a new sci-fi thriller that’s bigger, better, louder than the last.

Lately, superheroes have been super popular – dominating the movie market and sellingg billions in comic books & graphic novels every year. Some social scientists speculate that the pandemic has created a need for audiences to escape from reality, to feel safe and powerful. However, the real draw is actually more the opposite: people connect with superhero stories because they mirror human experience in universal ways. They’re often on the cutting edge of technology and social change, extending from a long and storied legacy. Superheroes reflect who we are and project our extraordinary potential.

In this spirit, we reached out to our friends (and N.I.C.E. partners) at FUNTIMES Magazine, a Philly-based publication that looks at trends and current events through an African/Caribbean/American lens. Columnist Boitumelo Mashihleho takes us on a tour of Essential Black Superherodom, starting way back almost ten years before Wolverine first slashed his way into comic book history. From the days of Stan Lee, the industry has called out racism and sexism, and today studios are making even greater efforts to tell inclusive stories with a diverse range of characters and viewpoints.

They also kick ass! Here’s Ten Black Superheroes for everyone who’s ever wanted to save the world.

TEN BADASS BLACK SUPERHEROES
From Boitumelo’s original list of fifteen on FUNTIMES (text in this post has been summarized).

In 1966, Marvel Comics introduced Black Panther in an issue of Fantastic Four and DC soon followed with Jon Stewart/Green Lantern. The list of Black comic book icons only continued to grow. Here are my top Black superheroes doing it for the culture.

Becoming the first African superhero in the history of mainstream American comics, the Black Panther was King of the technologically-advanced African nation of Wakanda, T’Challa possesses enhanced senses, superhuman strength, agility, reflexes, and stamina as a result of eating a heart-shaped herb in service to the mysterious Wakandan Panther God.

Wrongly imprisoned for a crime he didn’t commit, Carl Lucas volunteered for a medical experiment that went awry, endowing him with super strength and unbreakable skin. Escaping prison and creating the new identity of Luke Cage, he eventually started a business with his best friend and martial arts hero Iron Fist. These days, Luke leads his own Avengers team as well a squad of reformed villains called The Thunderbolts. He’s married to former superhero Jessica Jones.

In ancient Ghana, the warrior Tantu asked Anansi the Spider to create a totem that would give the wearer all of the powers of the animal kingdom, only if they would use the power to protect the innocent. Tantu used the totem to become Africa’s first legendary hero. The totem was later passed down to Tantu’s descendants until it reached the McCabe, an orphan from Africa who becomes a famous fashion model before taking on her superhero mantle. Vixen has fought along some of the greatest heroes in the DC Universe and has even served as a member of the Justice League.

Nubia is Wonder Woman’s twin sister — she was created from black clay, while Diana was made from white clay. When she debuted in Wonder Woman Vol. 1 #204, she kicked her sister’s ass (and ruled over an island of men)! Nubia was kidnapped by Mars, who raised her, controlling her mind so that she would help him bring down the Amazons.

DC’s first Black superhero with his own origin and storyline. He hails “Suicide Slums”, an allegory for blighted inner cities. With his ability to create electricity, he vows to better his neighborhood and fight for justice. Other vigilantes seek to stop crime or punish offenders, but Black Lightening tries to build communities and save people from predators and opportunists. 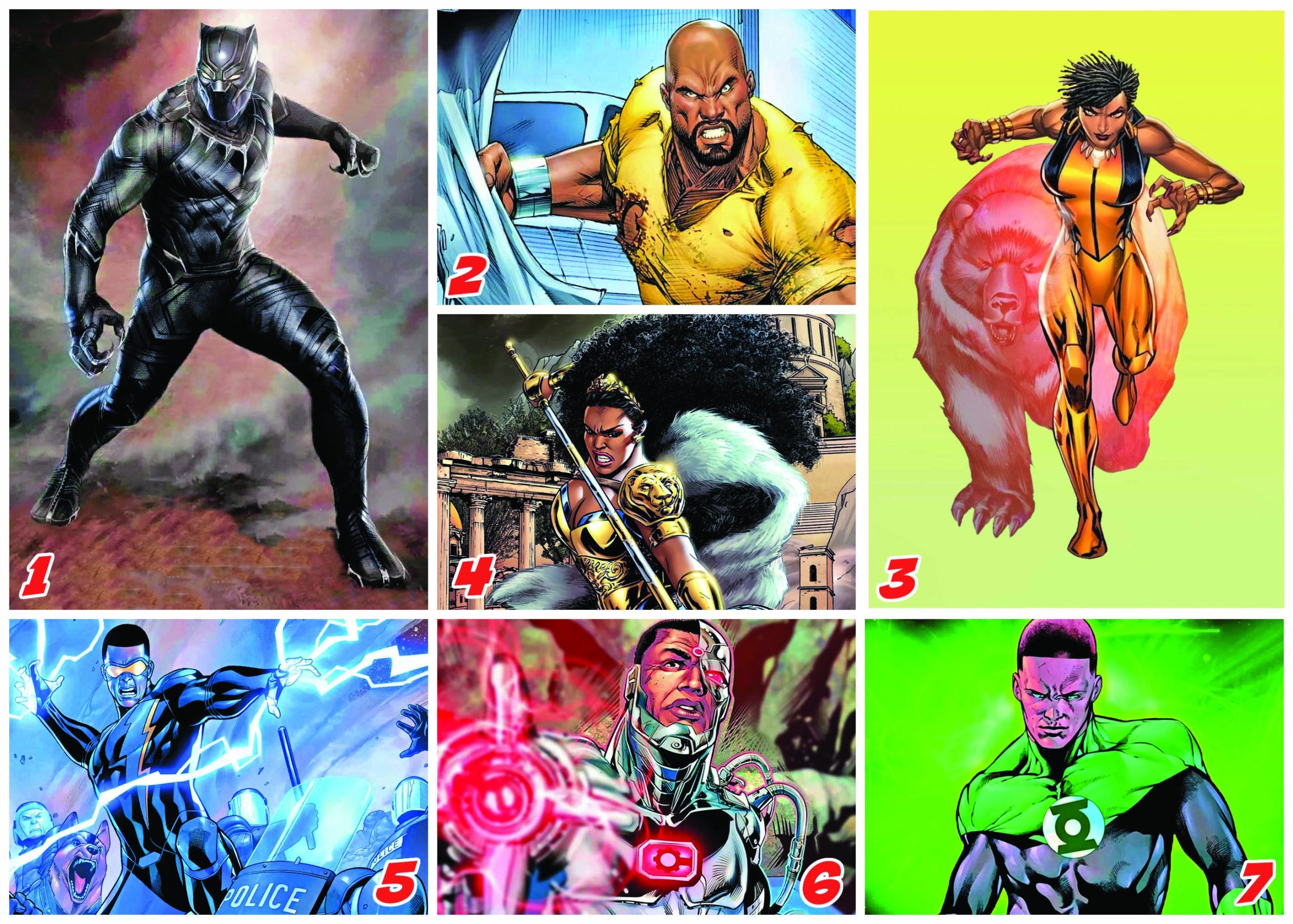 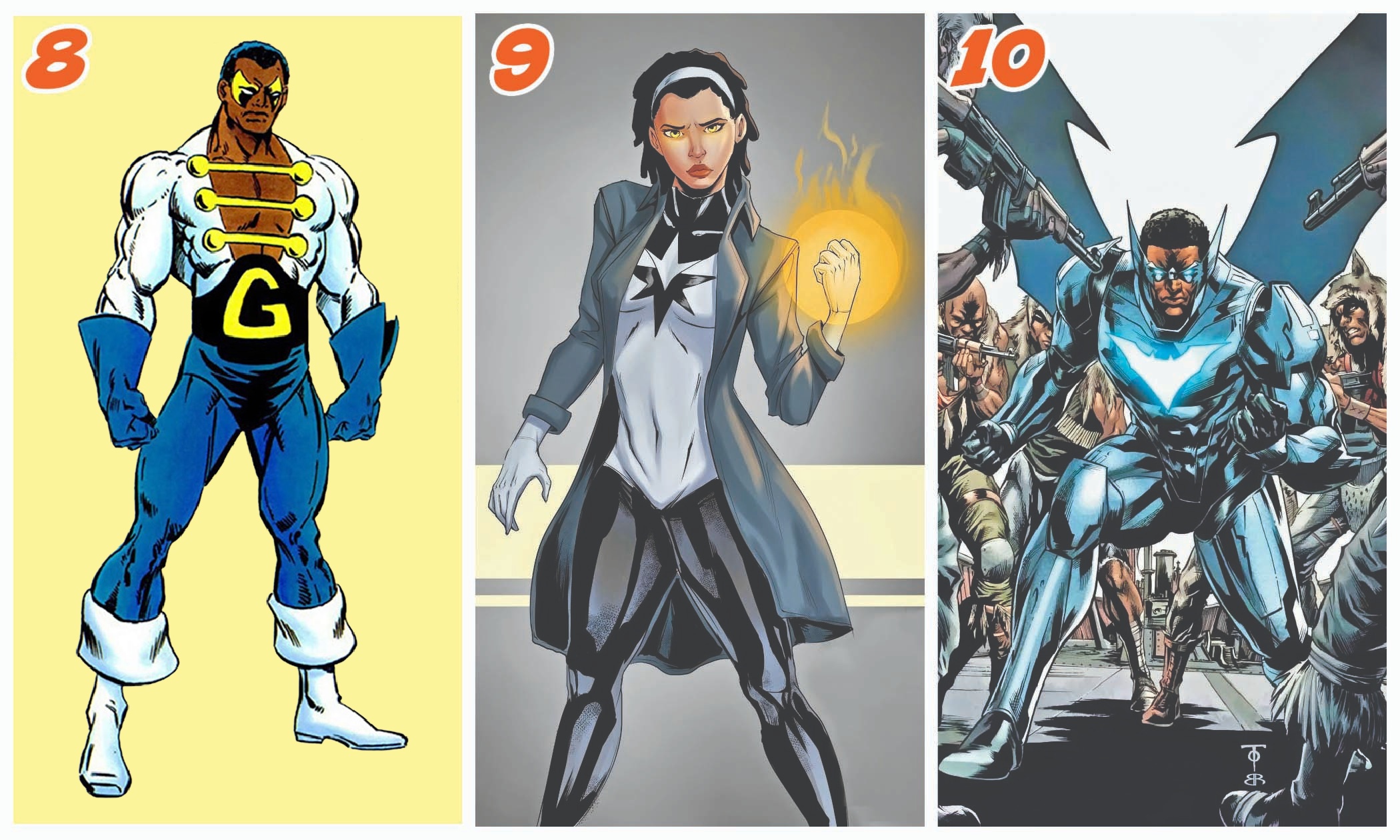 Part man, part machine, Vic Stone wrestles to preserve his humanity with every new upgrade. His parents are scientists who use him as a test subject for various intelligence enhancement projects. As Victor’s IQ grows to genius levels, he comes to resent his treatment. But after a serious accident that practically destroys his body, his dad makes him a Cyborg, saving his life and rebuilding him into a superior being.

Jon Stewart is one of Earth’s Green Lanterns who fight evil with the aid of rings that grant remarkable powers generated by courage, imagination and the electromagnetic spectrum of emotional fortitude. The ring is a weapon of the mind and powered by willpower, therefore it’s only limited to the wearer’s imagination. Unlike other Green Lanterns, Jon doesn’t wear a physical ring but instead has the Green Lantern symbol branded on his finger, so his whole body can activate (with his heart functioning as his power battery). He’s also an excellent sniper.

William Foster spent his childhood in the Watts ghetto, and worked his way up the corporate ladder at Stark Industries. He altered a particle formula to grow enormous strength & height, but the process exhausts him. As a technician for the High Evolutionary at his Antarctic stronghold, he learned of the villain’s plan to mutate everyone on earth and warned the Avengers. But! During the ensuing conflict, he swallowed a chemical that transformed him into Giant-Man, curing his cellular disintegration issues. It’s complicated!

Monica Rambeau is a New Orleans Harbor Patrol lieutenant who gained her powers after criminal scientists blasted her with extra-dimensional energy. After the incident, she gained the ability to transform into and control any form of energy within the electromagnetic spectrum. With her Navy career stunted by systemic barriers for Black women, she found purpose with the Avengers, where she rose to authority.

Batwing is an ally of Batman who uses hi-tech equipment to fight crime. Originally, David Zavimbe was a policeman in the Democratic Republic of Congo, fighting corruption in his department. He was gifted a powerful exoskeleton by Batman, through which he became Batwing, a essential force against evil and member of the Justice League International.

BUT WAIT, THERE’S MORE! Read on at Funtimesmagazine.com for five more standout Black superheroes. Please chime in below with your favorites, and your own reasons for feeling inspired by their stories.

Boitumelo Masihleho is a South African digital content creator. She graduated with a Bachelor of Arts from Rhodes University in Journalism and Media Studies and Politics and International Studies. She’s an experienced multimedia journalist who is committed to writing balanced, informative and interesting stories on a number of topics. Boitumelo has her own YouTube channel where she shares her love for affordable beauty and lifestyle content.

Special thanks to Eric Nzeribe, publisher of Fun Times Magazine and partner in WHYY’s Neighborhood Information and Community Exchange program (N.I.C.E.), for sharing this article with us.

Right Back Where We Started From

Reflecting on MLK’s “Give Us the Ballot” speech in the current state of our democracy.   [more…]