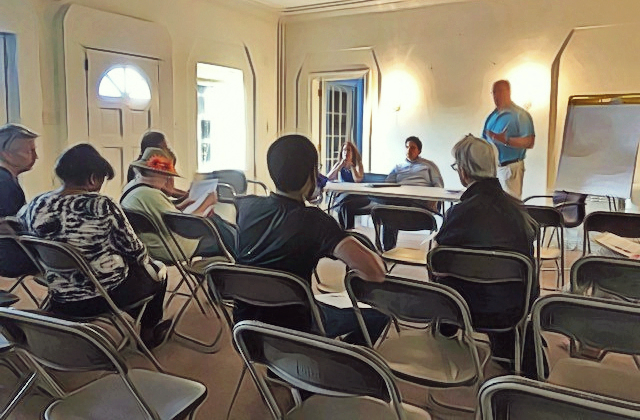 On a surprisingly warm evening last month, about 30 property owners, business owners, and local residents met on Chelten Avenue to discuss a problem clearly visible through the windows of the meeting space – trash along Gtown’s main corridors.

Local developer Ken Weinstein moderated the meeting of the “Make Germantown Clean Coalition,” which began with presentations by James Calamia and Janis Risch, the Executive Directors of the Roxborough and Mt. Airy business improvement districts (BID).

The purpose of the meeting was to flesh-out possible cleaning solutions for Wayne, Chelten, and Germantown Avenues. Comprising the heart of Germantown’s business district, these streets were largely neglected by the Germantown Special Services District (GSSD) and have only gotten worse now that GSSD has been deauthorized.

Ken kicked off the meeting by saying he selected the Roxborough and Mt. Airy BID directors because the annual cleaning costs and assessment budgets of those organizations are similar to Germantown’s.

The truth is that both districts remove large amounts of litter daily and attribute their success in keeping the districts clean to consistent removal and strong operations. It was also noted that both districts pay employees well – $15 per hour – with the Roxborough BID providing health benefits for one full-time employee!

We learned that all three communities launched their respective BIDS and SSD orgs without the assistance of an organized local business association. It was also surprising that neither BID had a litter-reduction education campaign in place, nor was it included in their budgets. 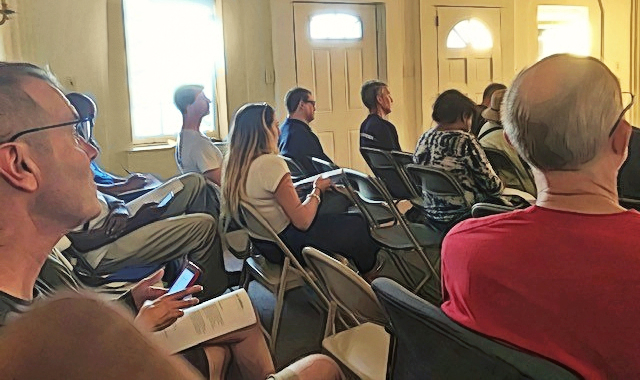 After the presentations, Ken suggested several possible solutions and invited the audience members to provide others. The list:

Most of the comments from the audience favored a combined approach. Darisha Parker, of State Representative Rosita Youngblood’s office, said that when she grew up in Mt. Airy, “people had pride in our community and it just wasn’t an option to throw trash.” Others noted that trash had been “normalized” and a change in the way people thought and behaved was clearly in order.

Connie Winters, owner of Historic Germantown Properties, said “It’s not that I’m against education, but the businesses and owners also need to take responsibility.” She added that she spent significant money every year maintaining her properties in Germantown.

Ken saw the value in many of the group’s suggestions, but felt that a management organization with a budget was critical for making any trash solution work. “There is no shortcut to cleaning the streets and sidewalks on a daily basis while educating students, residents and shoppers that it’s not OK to litter. Based on the information presented by the Mt. Airy and Roxborough BIDs, I believe starting a Germantown BID, paid for by commercial property owners, is the best way to go,” he added.

As a local property owner and resident, Sharrieff Ali made a plea for litter-reduction education coupled with a push for businesses to clean their own properties. This would sidestep assessments for now and avoid what he called “going from the frying pan into the fire.”

He also urged more community involvement in future meetings. “More input is critical before adopting any solutions,” he said. “A room of 30 people can’t speak for a community of thousands.”

The crowd agreed to reconvene the next meeting in a larger venue and to bring a wider group of opinions and stakeholders to the conversation.

Calling all Gtown residents! Please plan to attend the next “Make Germantown Clean Coalition.” Bring your friends, neighbors, and anyone else interested in seeing a cleaner, better Germantown. Stay tuned to The Local for info about the next meeting (TBA).

Ken Weinstein posted to Changing Germantown (a Facebook group) encouraging feedback and suggestions regarding how best to Keep Germantown Clean. He said he’ll be posting a meeting date/time/location this week — we’ll update this post as soon as we get it.

Meanwhile, the dozen or so comments to his post varied greatly. Several people chimed in full support for a BID, but also many liked the idea of tying in litter control with community service groups. One novel idea: a “cash back” recycling system where customers could get like a quarter off a purchase if they brought their own bag or containers for bulk items. Another interesting suggestion: have elementary school kids design anti-litter/Keep Gtown Beautiful posters to remind people around town not to litter.

Looking forward to hearing more details about these plans and others at the next meeting. Stay tuned for details…

Howl to Make the World a Better Place

Clothes that move & groove with you — plus give back to the environment and community. A very yogic swimsuit shoot at Alden Park, with PhillyU senior and sustainable living advocate Nicole Boychuck.    Yoga [more…]

East Falls fashion in NYC? Hollywood, too. PhillyU alumna, Jovan O’Connor banked on her talent and is living her dream. Take a peek at her Scotts Lane studio, and her latest collection of “special occasion” [more…]