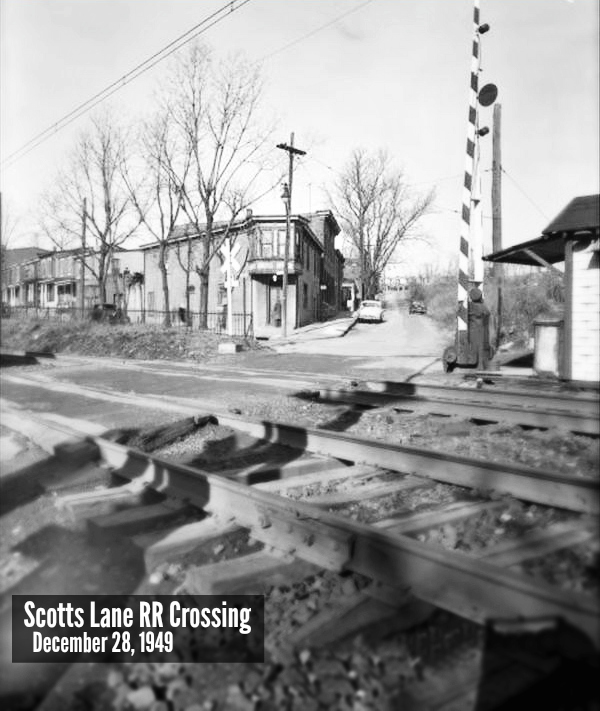 “This used to be a bar,” says Rick Calvitti, pointing to holes in the first floor of the Calvitti Company office building on Scotts Lane. That’s where they ran the tap lines to the kegs in the basement,” he says. “We tore out a walk-in fridge down there not too long ago.” It’s part of the ongoing renovation of a building that’s housed Calvitti Company for almost 50 years, but dates back much further. 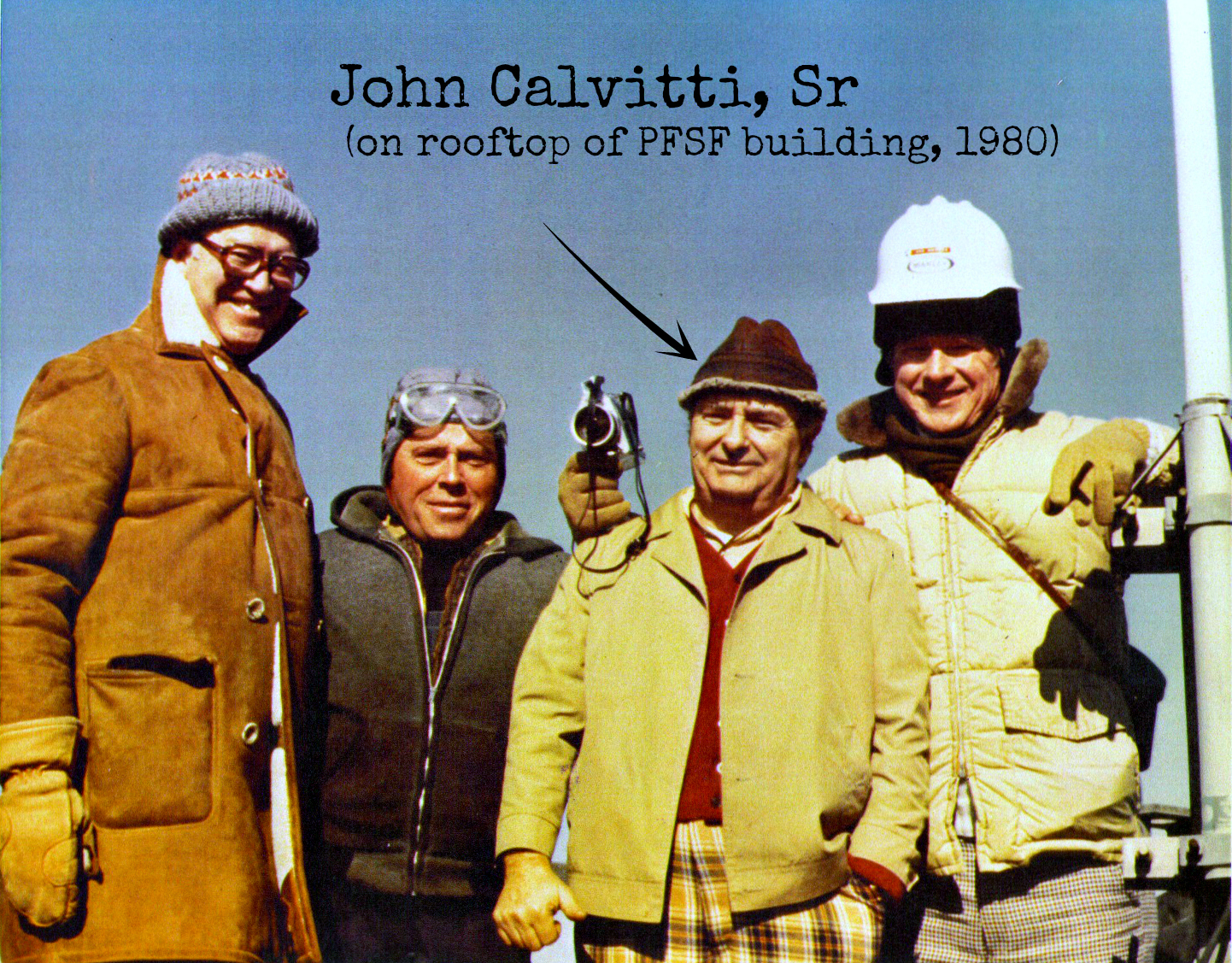 Calvitti and his brother Ed, co-owners of the family business, understand the history of the place very well. They’ve been renovating the building for years in order to better accommodate the cooling tower repair business they’ve run since their father John retired more than 30 years ago.

“We know there’s a lot of history in here and you feel that when you’re tearing things out, but at the end of the day it makes it easier to run the business,” says Ed. Despite the many changes they’ve made to the structure, Rick and Ed haven’t forgotten the stories about the place and the neighborhood that made it special.

Meeting with the brothers and their office manager Paul Whitson (the “resident historian” according to the brothers) I get a crash course in the history of Scotts Lane and the surrounding area decades ago. 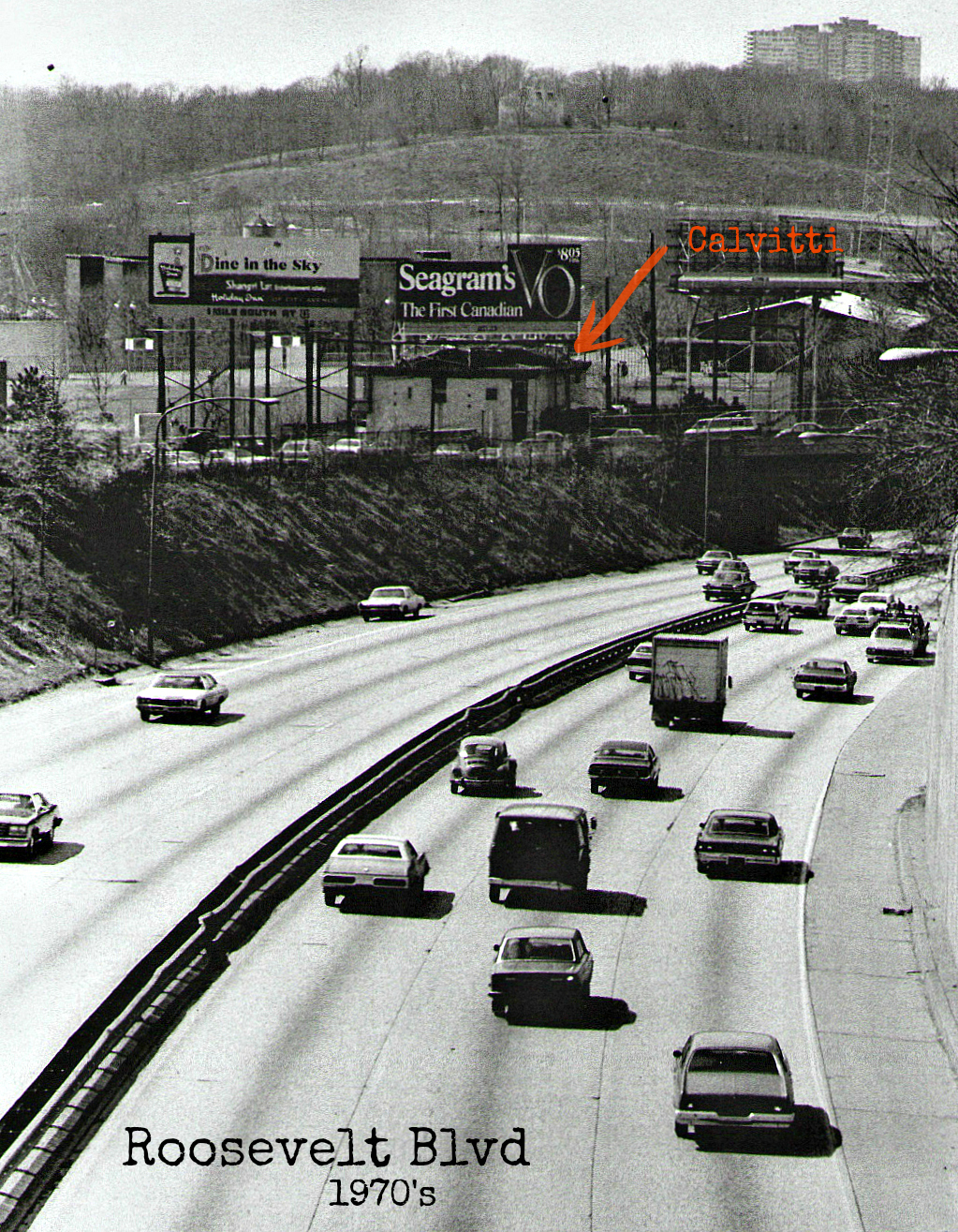 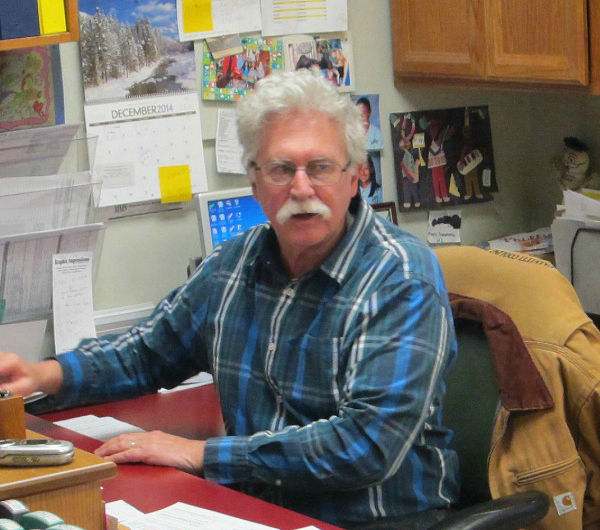 I hear about Tom McNicholas and Joe Boyle and how, when they were kids, Rick used to give them building materials from the Calvitti lot so they could build forts near the railroad tracks.

Then there’s the Catfish Cafe at Ridge Avenue that used to have burgers so big and juicy that people drove out from Center City to get them. When I tell Rick I love looking into the windows of the old abandoned cafe, he smirks “Did you see the piss trough?” 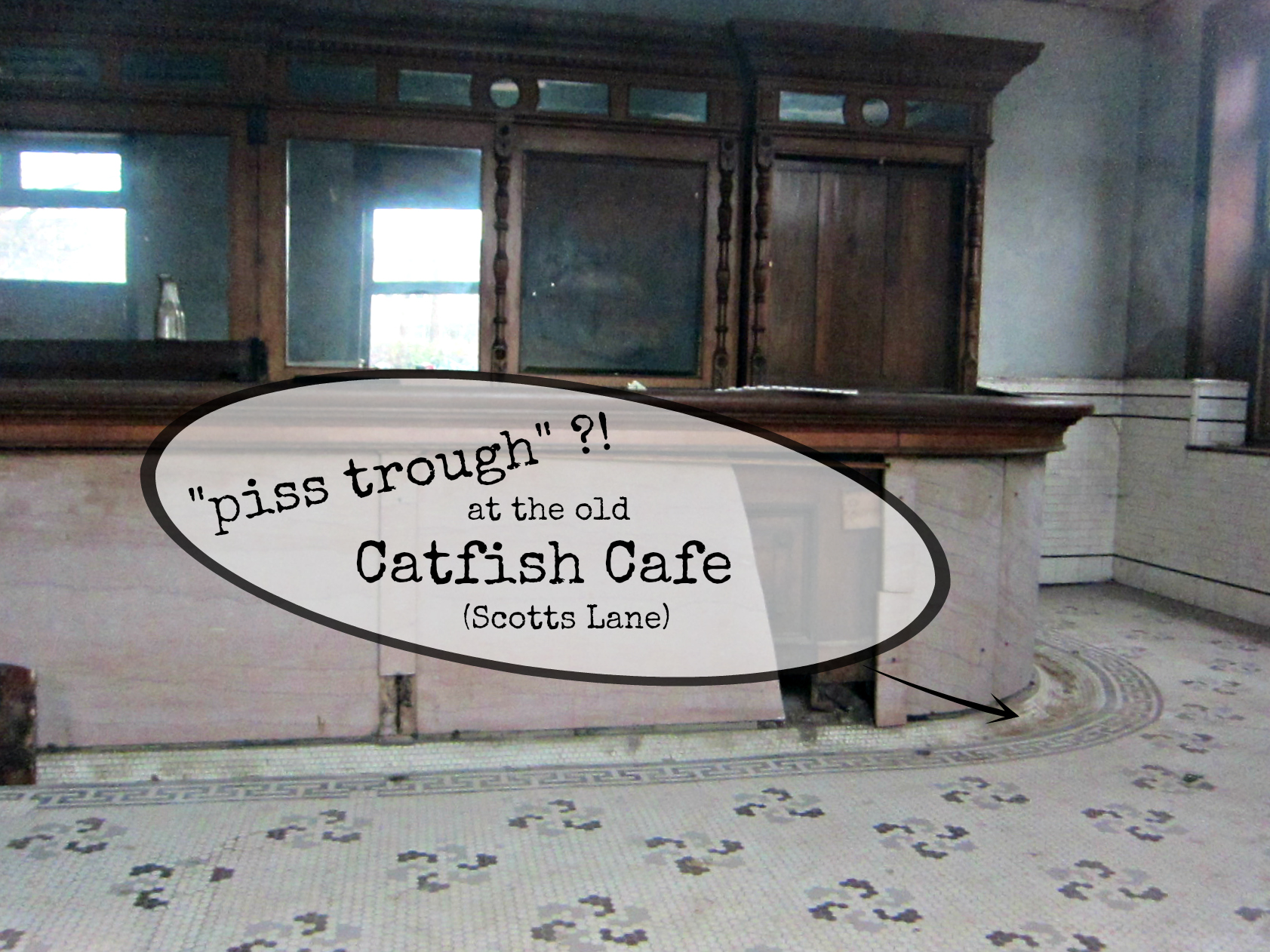 Uh, why yes. We did notice that, thanks.

Recalling that area of the neighborhood, Ed tries hard to come up with the name of the black-and-yellow diner that was directly across the street from the Catfish.

He remembers going there when he was 12 and seeing the same guy every Saturday working the grill in a white tank top t-shirt. “It was a greasy spoon,” he says “and I think it was run by Greeks.”

He turns to Rick and Paul for an answer but they’re already tracking down their own recollections of the neighborhood. For Paul, he comes up with guy named Frank, who used to work the meat slicer at the Tarsiewicz’s store on the corner of Indian Queen Lane and Conrad.

“He used to mutter under his breath all the time while he was cutting the meat. They had great sandwiches but he was really an intense guy. He was in the Navy as a young man, pulling asbestos out of ships after the war. He didn’t believe in all that ‘asbestos is bad for you’ stuff, but when he got sick… Man, he died fast.”

Rick chimes in with a memory of Big and Little Tony — two “tough, tough guys” — who worked for his father way back when:

“Big Tony was a jazz player with Hollywood-good looks. Little Tony was younger, a real bruiser. He knocked a guy out one day in a snowstorm.

He was out in the company truck towing people and this guy was giving him attitude. The guy got into Tony’s face so bad he stood on the running board of the truck and was leaning in the window of the cab. So Tony reached under the seat and cold-cocked the guy with a two-pound stone mason’s hammer. Broke his jaw and left him unconscious in the street. That was little Tony.”

When Ed mentions a third brother, one that supposedly stole a swimming pool, there’s a pause and all three men struggle to find a name. No luck. So they call the one person who would know. “My mom Marie is like a machine with the old neighborhood stuff. She remembers it all.”

He mentions with a smile that she’s 87 years old and still drinks her Crown Royal every day. “She smokes her cigarettes every day too”–a habit she acquired as a 13-year old girl. “She used to buy them one at a time at the corner store when we lived in South Philly.”

I can hear Marie’s sharp precise voice on Rick’s cellphone even though I’m a few feet away. He smiles as she goes on so quickly that he has to grab a pen and paper to keep up with all the information. 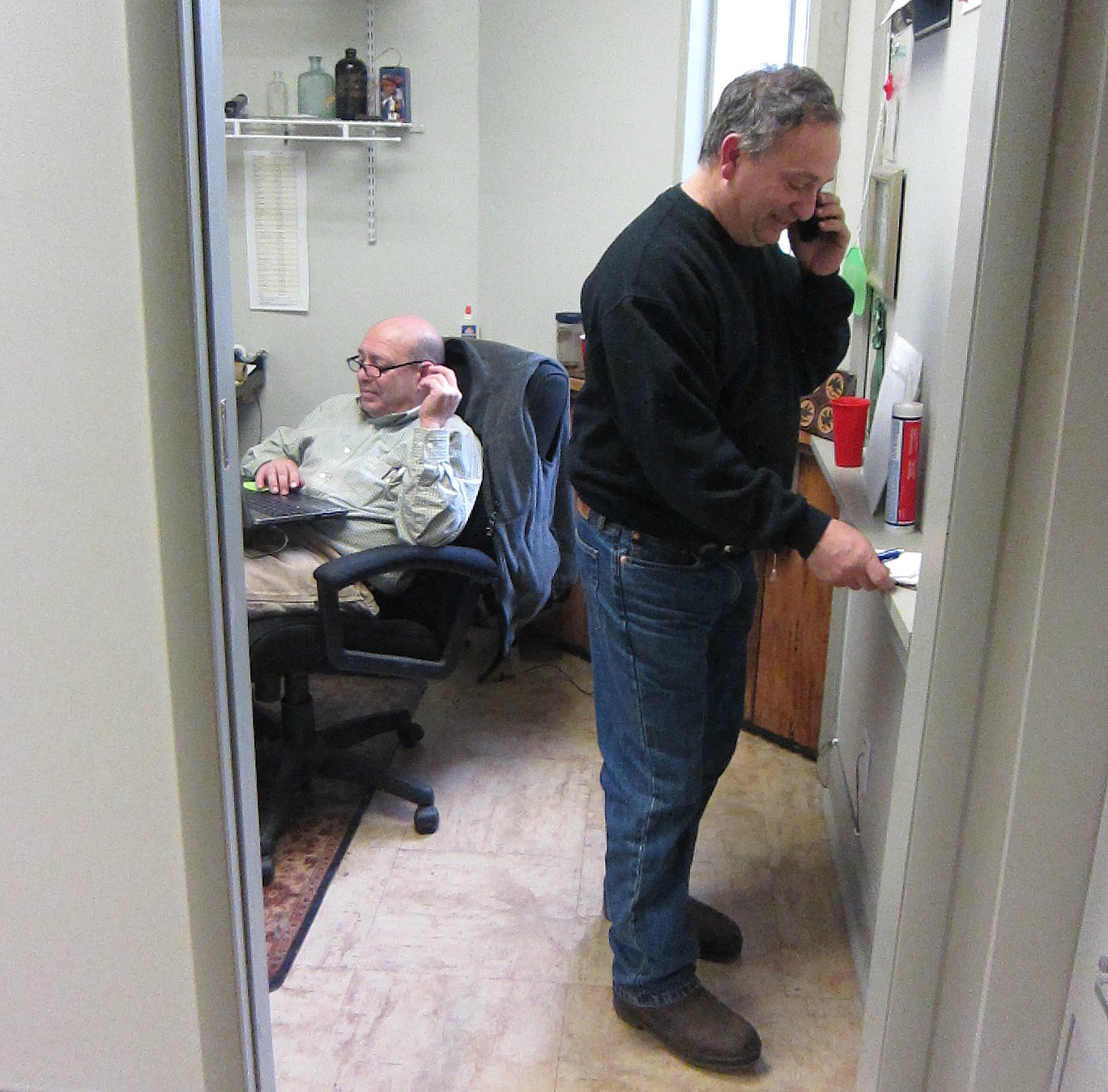 On the phone with Marie Calvitti

Rick hangs up but Marie wasn’t finished. She told him she’ll find out more from her “network.” A true historian. Rick adds:

“Little Tony was the guy who took the swimming pool. Got it piece by piece and drove off with it in one of my Dad’s company trucks. Dad got in a hell of a lot of trouble for that I’m sure. And that’s when he had to fire Little Tony.”

But Tony was the exception:

“On Fridays he’d invite all the workers over to his house and Marie would have Italian food out on the table. Sausage, pasta, all kinds of things. Beer, of course. And Dad would have the cash envelopes lined up on another table. That was the way it was back then.”

In a storage room behind the office Rick pulls out a box of his Dad’s possessions. Trophies, awards, a number he wore in a bike race he didn’t finish (“didn’t finish–chain broke” is written on the bib) are in the same box as a collection of artistic photos of the Falls Bridge and sculptures near Boathouse Row.

“He had a lot of interests,” says Rick, “and he did a lot with the business.” He holds up a photo of a helicopter landing a cooling tower on the roof of the PSFS building in the late 1970s (now the Loews Philadelphia Hotel). “That was one of his jobs.”

John Calvitti Sr. was always a bit of a renaissance man, and when he saw opportunity to grow his construction business he was willing to climb literally anywhere to reach it. 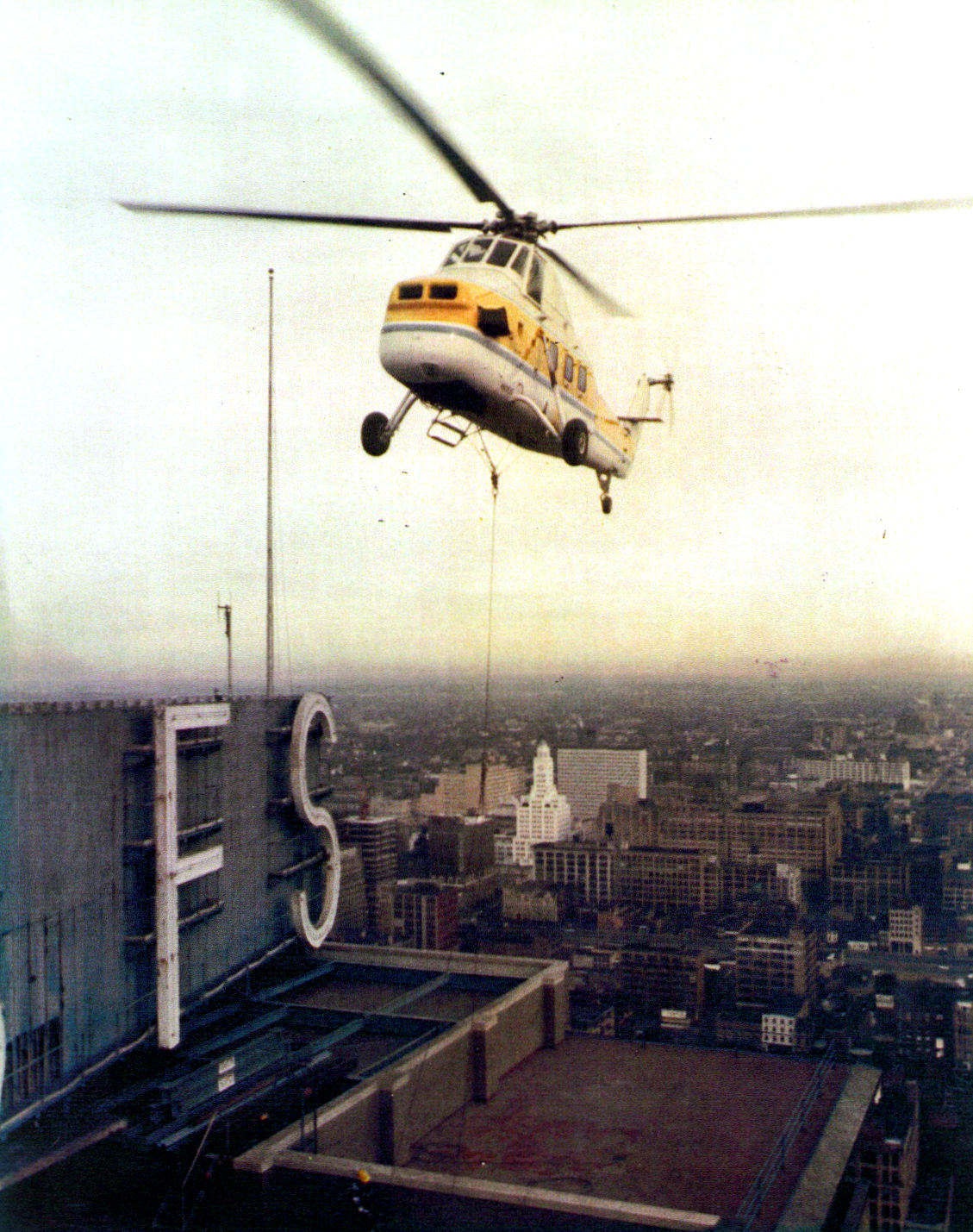 When I ask Rick who I should speak with about more neighborhood history, he says “I’d go to the true locals. We know a little bit about the immediate area around Scotts, but if you want the whole story, you have to go to the ones who’ve been here their whole lives.”

He steps out of his office, looks up the street and shoots out three names for us to follow up on:  Michetti, Cox and Rapone. “Those three families’ll give you the real deal about East Falls.”

Michettis, Coxes, Rapones — you’re up! Meanwhile, big thanks to the Calvittis for their homespun take on East Falls neighborhood history. 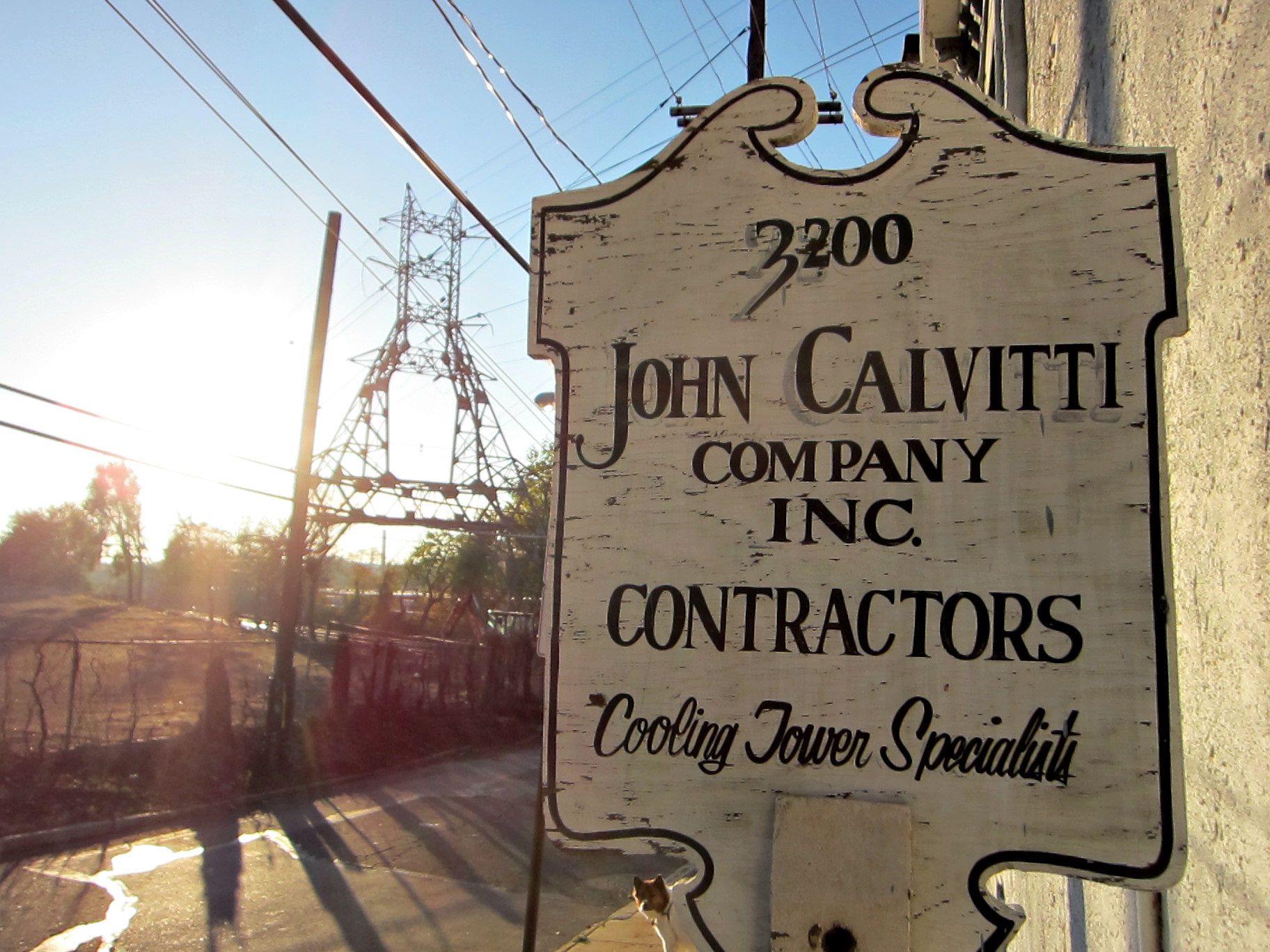