Drivers — please wake up: this isn’t a video game. 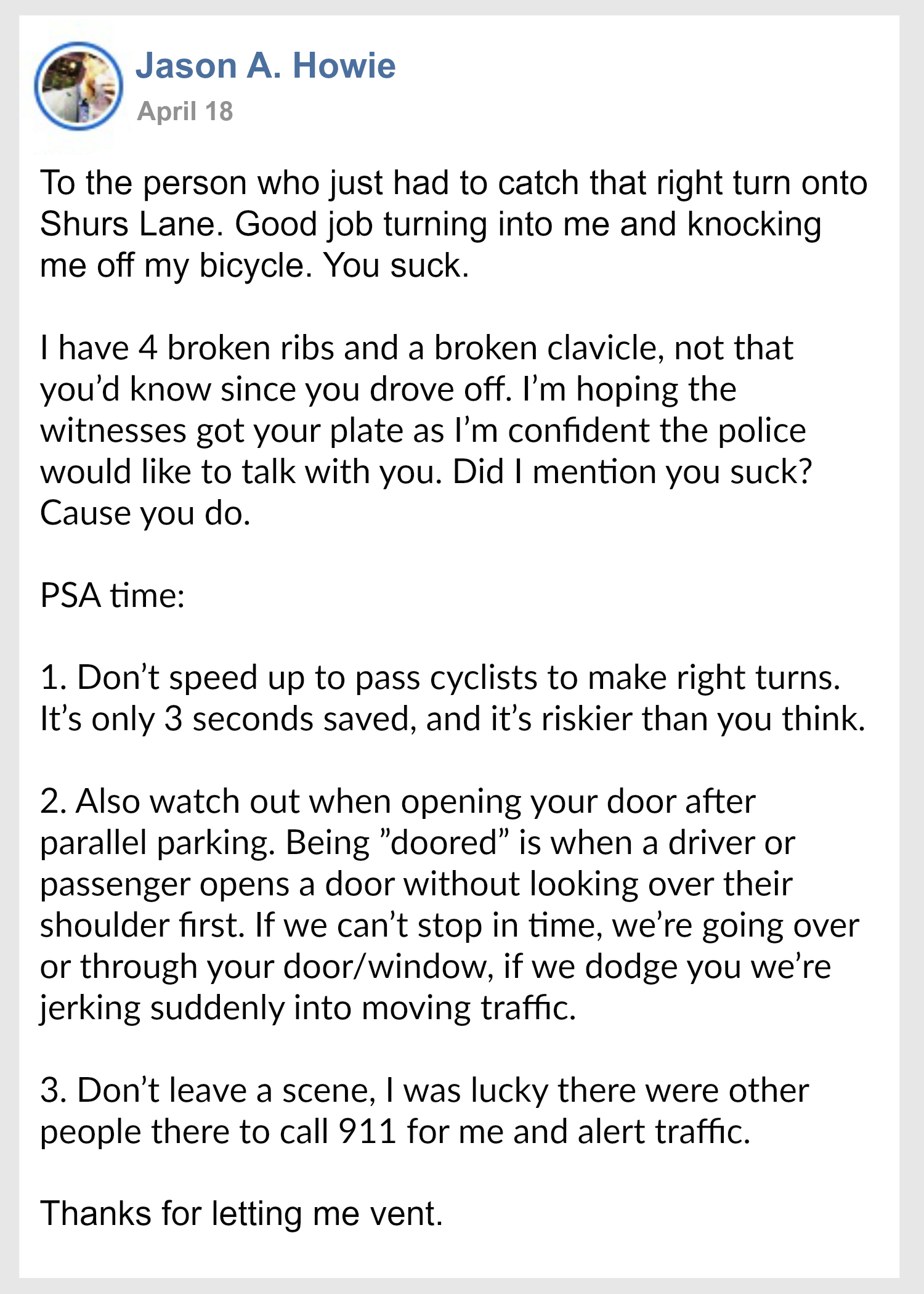 Heartbreaking, to see Jason’s message on Roxborough’s neighborhood Facebook group last April. We know Jason – he’s a neighbor in East Falls – and we’re pleased to report that he has sailed thru his surgery and is all patched up now. So naturally, our next thought is how to help prevent bike crashes like Jason’s from happening again.

With summer in full swing, drivers are being asked to share the road with cyclists of all skill levels. There are Indego amateurs plowing into traffic from Kelly Drive, and the weekend warriors huffing up the hills, hogging their lanes. The worst: those day-glo spandexed bike jockeys darting around motor vehicles like dragonflies. Grrr, amiright?!

Seriously, though, it’s the truth: a recent study revealed drivers literally view cyclists as “less than human.”  Seems their wrap-around shades & mechanical movements create some kind of sick psychological block that makes drivers twice as likely to respond aggressively toward them than other motorists or pedestrians. Indeed, the word “spandex” appears six times in the comments to Jason’s post – here’s a typical example:

Jared Judgypants  I bet the people arguing never had to sit behind a douchebag in the middle of the road going 7 mph while holding up people who are trying to get to work or have priorities instead of just being an asshole with their tight spandex and super cool logos on their helmets looking at butterflies.

You don’t mean that, Jared – it’s a brain fart! Your synapses made a snap decision that these brightly colored moving objects in the road are not really people. That’s why you’re so angry at them!

That’s why we’re all so quick to feel crowded by cyclists, and competitive with them in traffic. Of course, not everyone experiences this phenomenon – and not all to the same degree – but still, it’s worth noting that if seeing cyclists raises your blood pressure, your mind’s probably playing tricks on you.

The good news is, now that we know what’s going on, we have the opportunity to override these high-risk impulses. 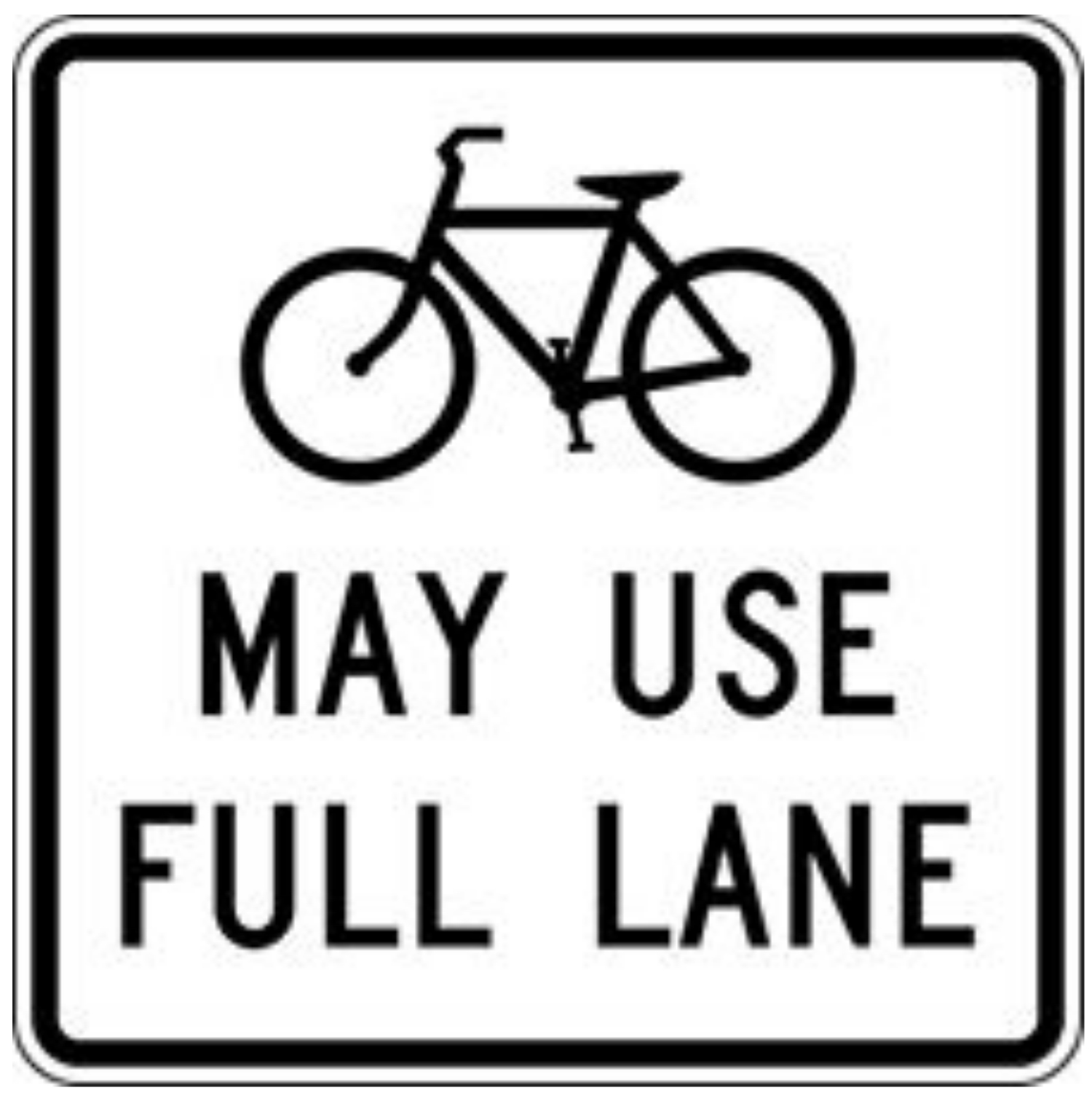 Knowing cyclist rights can help too – especially these five laws we found on PennDOT’s webpage:

But wait! Motorists always say, bicycles break the law all the time. Aren’t these people just begging to get hit, whizzing carelessly through intersections as they do?

And last year, comprehensive research by the University of South Florida concluded cyclists were compliant with the law 87% of the time, while motorists only 85% — a much slimmer margin, but it’s worth noting the studies did not measure speeding or texting while driving. Even worse: in 20 out of 21 close calls recorded by scientists, drivers are faulted with improperly yielding/turning.

And by the way – yielding for stop signs isn’t dangerous bike behavior. In fact, safety research shows yielding is actually safer than stopping, because allowing bikes to maintain their momentum keeps traffic flowing and lowers the occurrence of “road rage” behaviors in drivers (for Delaware cyclists, yielding for stops is the law and other states have adopted similar legislation).

Does any of this exonerate that hipster in mirrored Oakleys flipping you off in rush hour traffic? Of course not. But cars are lethal weapons, and biking on busy roads is stressful. Lives can change in an instant. Let’s do what we can to all get where we’re going safely.

Final thoughts from another cyclist friend, Lou Savastani, whose near-crippling run-in with a motor vehicle inspired him to found Lower Merion Safe Cycling, an organization dedicated to education and empowerment. Lou suggests the next time you’re behind the wheel and frustrated by the cyclist in front of you, remember how much more time you spend stuck behind cars vs bikes.

And check your car privilege. “As a motorist, you’re never ‘stuck’ in traffic,” Lou reminded us, “You are traffic.”

DID YOU KNOW? City Council passed legislation this June for a record number of protected bike lane projects adding up to 20 full miles by 2020.

WHAT TO DO in a bike accident? Stay safe with this handy checklist.

No cheese, no tomato sauce? The Ninja’s confusing encounter with Chinese pizza.  [more…]