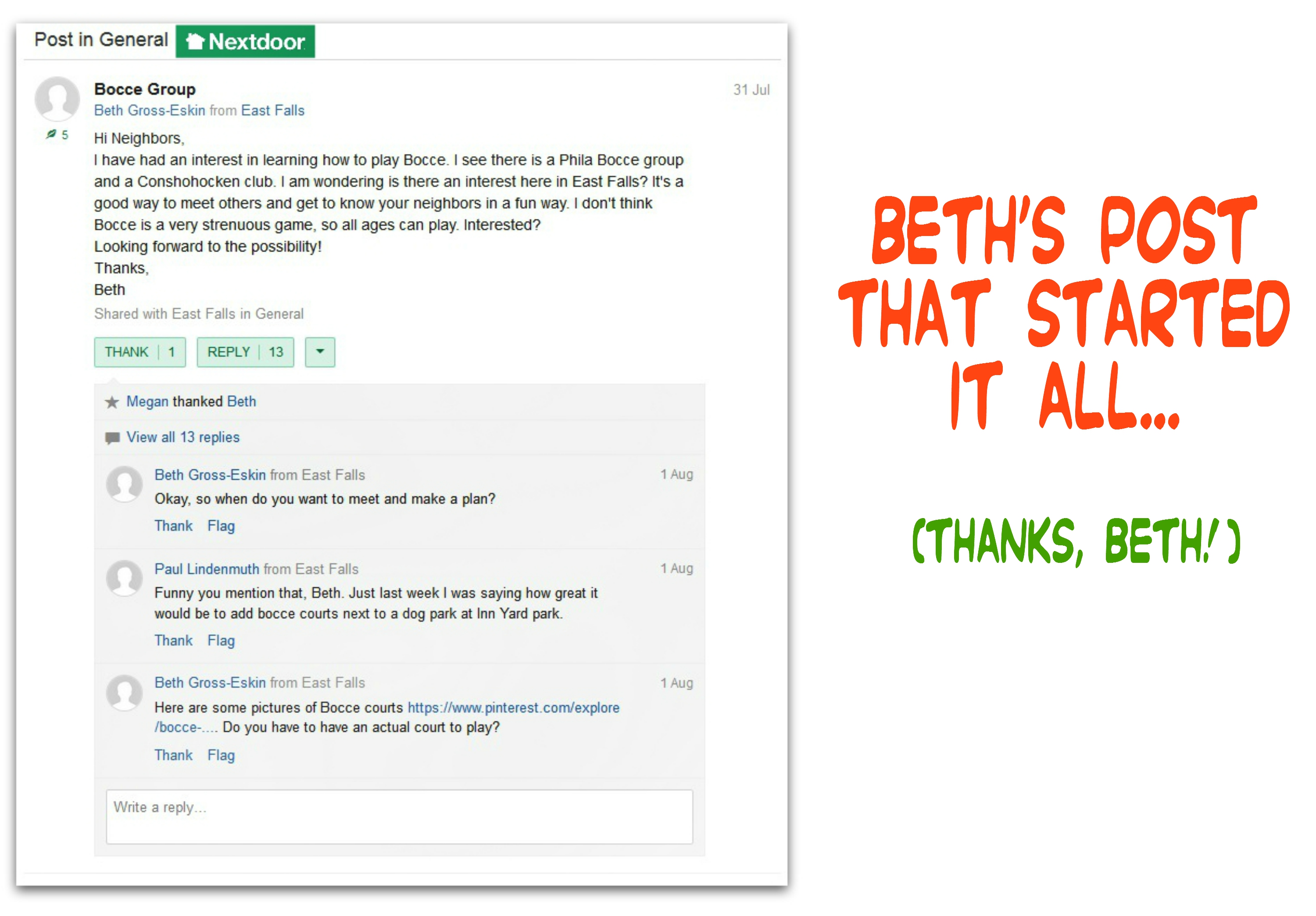 It started with a casual conversation on an internet forum that caters to local neighborhoods: “Anyone interested in playing bocce?” And so it was that barely a week later, 3 former strangers met behind the tennis courts at McDevitt Recreation Center and began laying the foundation for a bocce club. 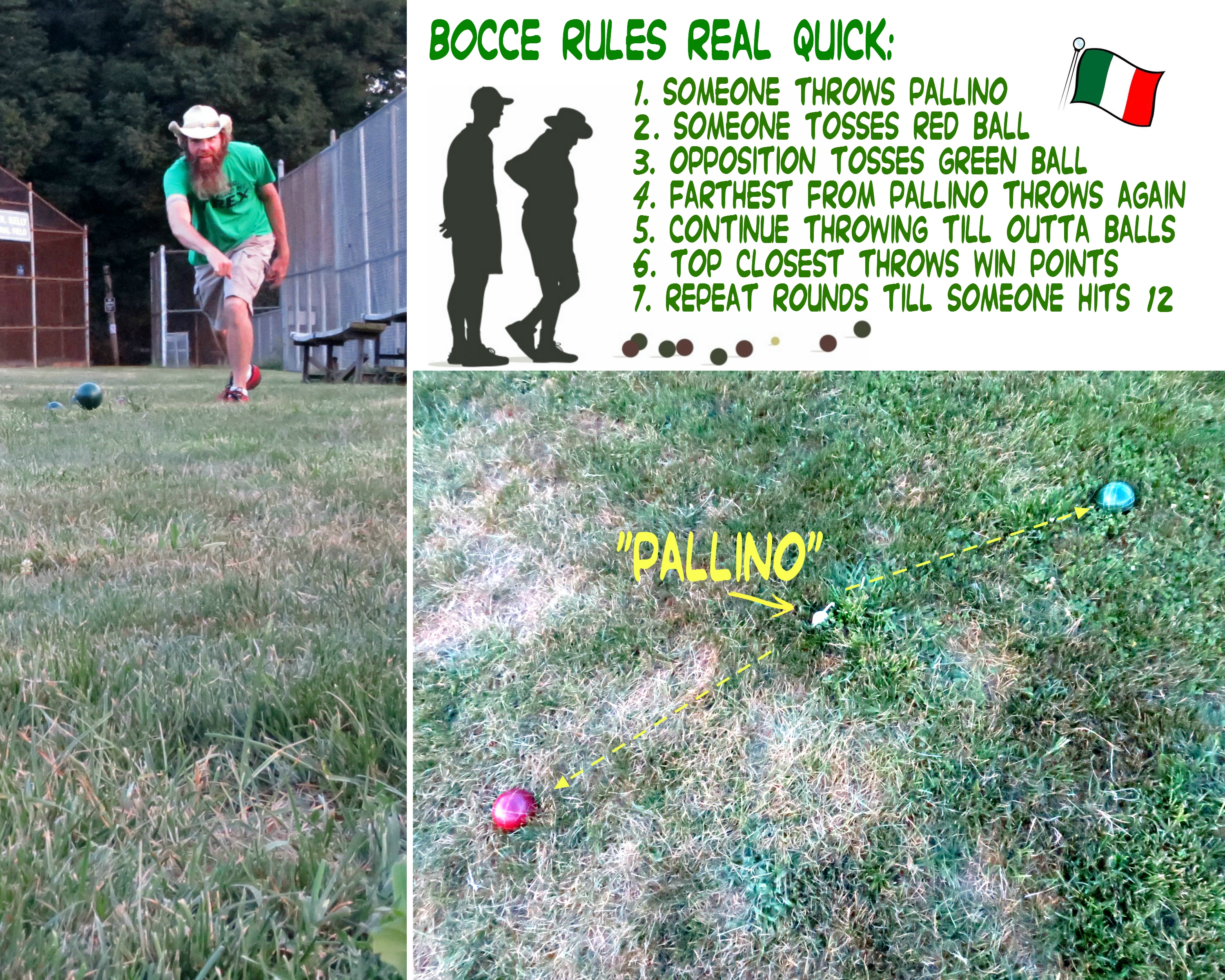 If you are not familiar with bocce, it’s simple – yet potentially complex.  To quote the Philadelphia Bocce Club’s webpage, “Bocce is that game where you try to get the big balls close to the little white ball.”  That’s pretty much it, guys.

Beyond basic hand and eye coordination, not much else is required. Bocce is a game that can truly be played by all ages and abilities. It can be played as singles or teams. Both men & women are equally good at it. No special skills are required, if you can roll a ball underhanded, you can play bocce.

The typical bocce set has 8 balls – 4 in one color, and 4 in another. Additionally, each set has one pallino (the little white ball or, in East Falls’ style of lawn bocce, whatever little white thing we can find at McDevitt). Players take turns rolling their bocce balls as close to the pallino as possible. Scoring is tallied for each round, with as many as 4 points per round (only one side can score in any given round). The first side to score 12 points is deemed the winner.

Even with total newbies, a game only lasts like 15 minutes and — here’s the best part:  No running! No sweating! No exertion! Kinda feels like cheating to call this a “sport” but who are we to argue with the United States Bocce Federation, who calls it “a competitive and precision sport, internationally-sanctioned in over 50 Nations”?

Right now, this ancient game of Roman nobility is having kind of a hipster moment, with clubs & bars popping up in big cities like DC & NYC promoting bocce as a relaxed, inclusive social past-time for everyone from parents to professionals.

On Tuesday, August 25th, East Falls Bocce Club met just after 7pm at McDevitt and fit in two complete games before calling it a night. The first match saw Beth from Bowman Street give Miki from Henry Avenue a good run, but ultimately, the bocce balls rolled in Miki’s favor. Just as the next match started, Carolyn and Steven from East Falls Local joined in the action, teaming up against the Sparks duo. The game was close for the first several rounds, but Steve and Carolyn swiftly took the lead and ended the match as strong victors.

Consider yourself invited to join us for a game, or bring a picnic blanket and cheer for the red team or the green team. Everyone is welcome to join! 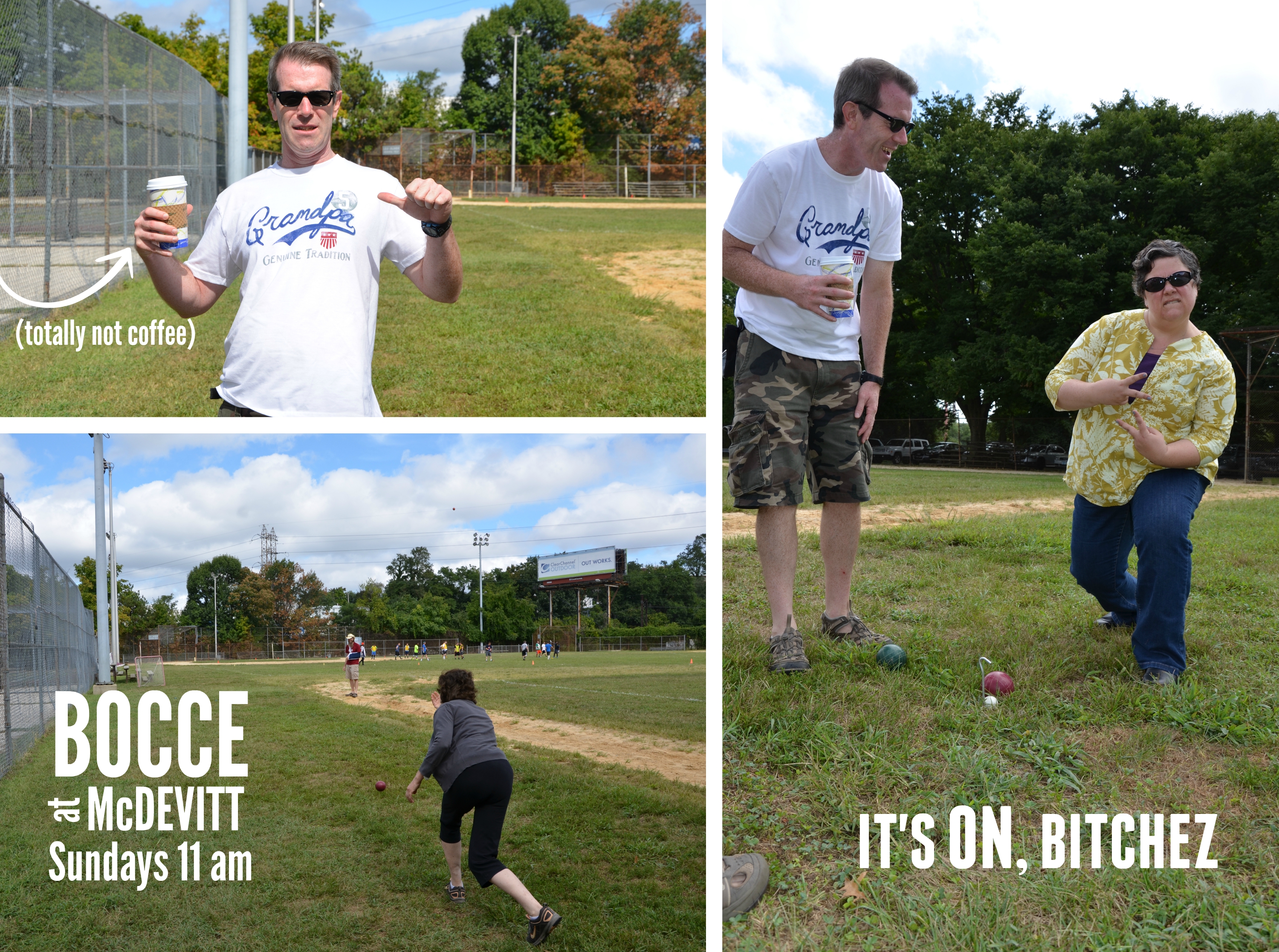 For more information, reach out to Beth on NextDoor or email Heather at htsparks@gmail.com. Ideally, though, you should just come on down and see for yourself how fun it is to play this simple, friendly game with neighbors.

Here’s to bocce balls in the Falls — let’s roll!