Parents and teachers, with the support of the Philadelphia Federation of Teachers (PFT), held a teach-out on February 8th, a bitterly cold morning. It was followed by a rally at the School District of Philadelphia building to protest the District’s failure to adequately address ventilation and heating of classrooms, as well as teacher vaccinations. 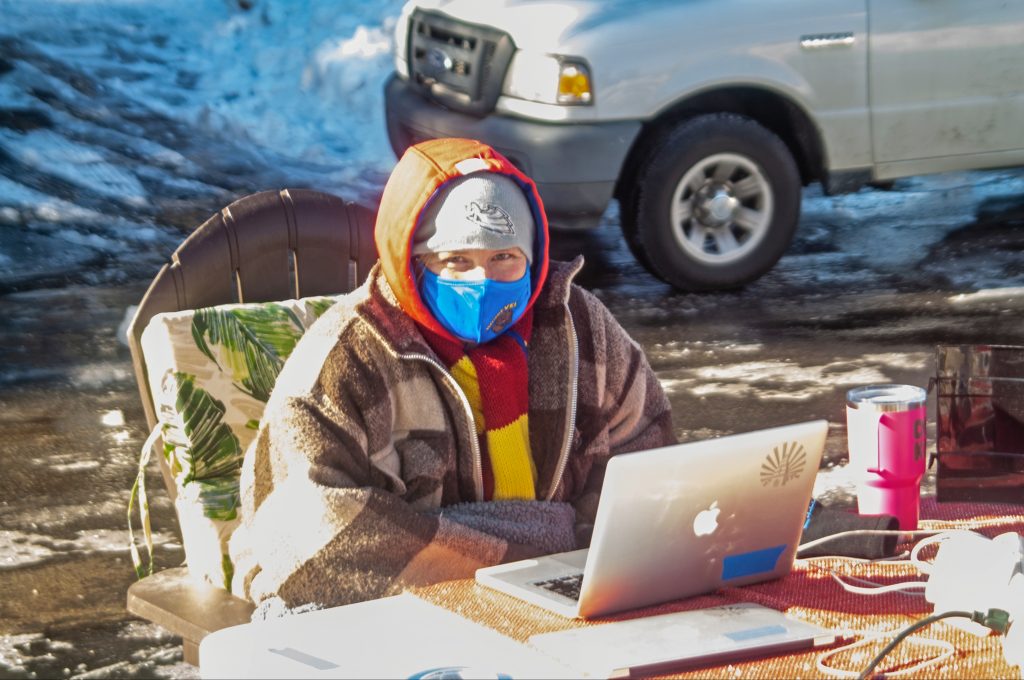 Their complaints also included asbestos in school buildings, lead in the drinking water, and a host of other issues relating to aging school structures, some of which were built at the turn of the 20th century or before.

The District’s answer to fixing the poor ventilation in the vast majority of schools was to install window fans in classrooms, where students would be taught in the middle of winter.

When asked how they would warm the freezing classrooms, the District seemed confident that the ancient steam heaters in most of its schools were up to the task. “These heaters regularly don’t work, they’re decades old,” said Mrs. Elliot a Kindergarten Teacher at Roosevelt Elementary School in East Germantown.

Teachers at Roosevelt taught classes outside in the parking lot, refusing to enter the building. They did this on one of the coldest mornings of the year because they felt conditions inside the school during a pandemic were more dangerous than the freezing temps.

“I stand with our teachers when I say, they shouldn’t return to in-person classes until it is safe. I find it not only dangerous, but ridiculous to expect teachers to return to face-to-face lessons until then,” said Micheal Lambert, the father of a 1st grader in the public school system.

“We need a plan that has the trust of our school communities, we need a plan, not fans,” said Councilmember Jamie Gauthier. 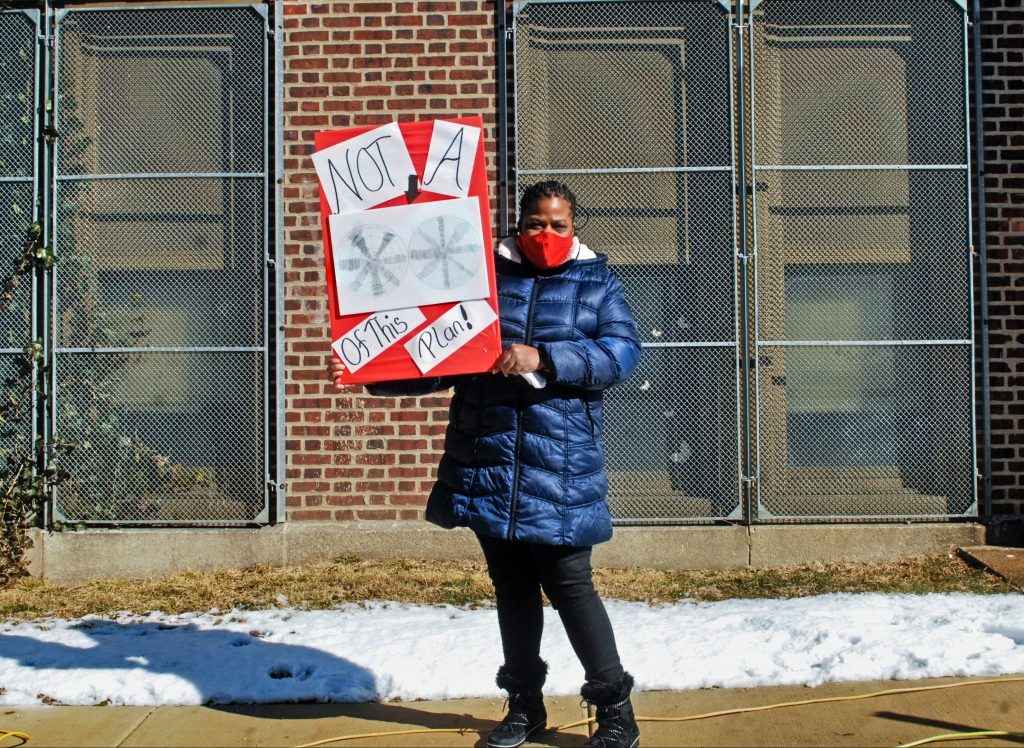 State Senator Sharif Street, other State Representatives, Senators, and Councilpersons have all called on the city to prioritizes vaccinations for educators.

“Getting children back into classrooms throughout the city is vital to their future, so I’m thrilled to see CHOP stepping up in a major way for our children,” said Mayor Kenney in a statement.

Philadelphia School Superintendent William Hite said in a statement that the district has spent $65 million in COVID-related safety improvements, including the installation of window fans to “improve ventilation.” However, many teachers have reported that no fans have been installed to date in their school, including at Roosevelt Elementary School. Sources say only about a quarter of the schools have had their ventilation systems either fixed or had fans installed.

Mayor Kenney’s office has stepped in with a third-party mediator and PFT is engaging in the process with the District.

The School District continues to deny the safety concerns put forward by teachers, asserting that teachers and parents agreed to the terms of the reopening and that the measures are adequate for students and teachers to return safely.

Thirteen Philadelphia child-welfare nonprofits have called on PFT to abandon the fight for safe buildings for themselves and students, suggesting that teachers inspect the building themselves for safety. 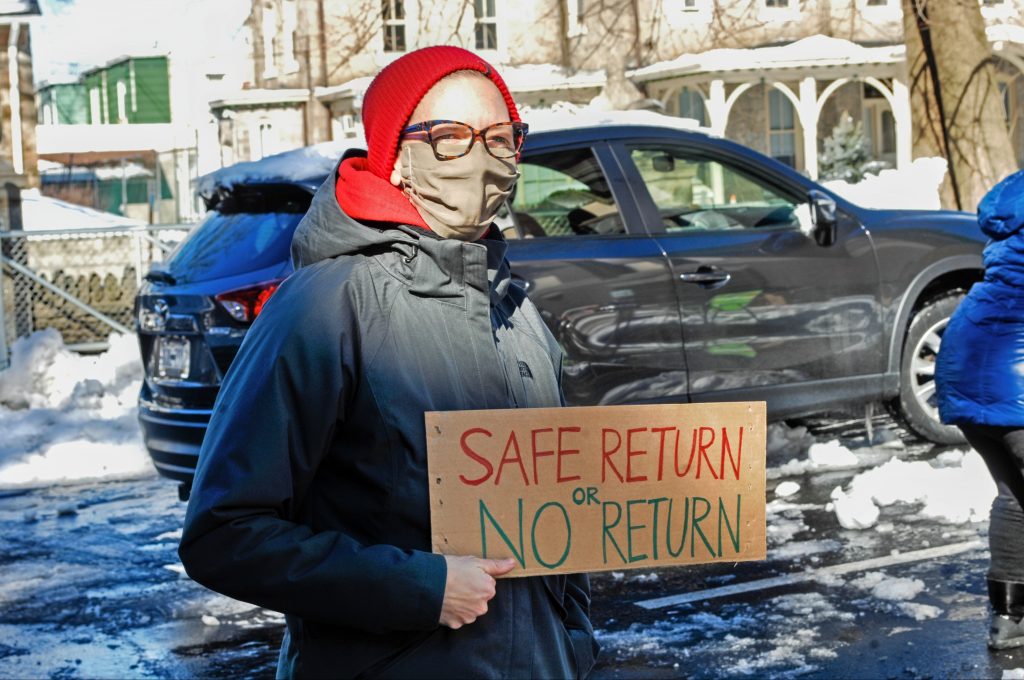 “Frankly, I’m offended that these organizations would suggest that educators, who have, time and again stepped up to the plate in truly heroic ways, haven’t risen to the occasion amid a global pandemic that has killed nearly 3,000 Philadelphians,” said PFT President Jerry Jordan in a statement. “I will not allow my members to be villainized for demanding that their classrooms are safe for occupancy for themselves and their students.”

The District is planning to open for hybrid learning for its 9,000 students in kindergarten thru 2nd grade on February 22.

All photos courtesy of Cory Clark

About Cory Clark 37 Articles
Cory Clark is a Photojournalist and writer focused on Human Rights and other social issues. His work can be found in hundreds of media outlets from Philly Magazine to Fortune. He has been a long time freelancer for Getty Images, The Associated Press, and Association French Presse. Cory, his wife, and son are residents of East Germantown.

Ready for Your Close-Up

East Falls’ favorite photographer launches stylish studio in nearby Germantown. We couldn’t be more excited for Caity MacLeod of “Captured By Caity” and also her wildly popular “East Falls Faces” profiles in the Local. She’s [more…]