Scenes from DC on inauguration day

(All photos courtesy of Cory Clark)

On January 20, 2021, at 12PM, President Joseph R. Biden was sworn in as the 46th President of the United States in an occupied Washington, DC.

More than 20,000 National Guard troops and thousands of federal police officers were stationed throughout downtown DC, turning part of the city into an open-air prison. Huge fences sectioned off portions of the area into manageable pieces that could be flooded with nearby troops at a moment’s notice. 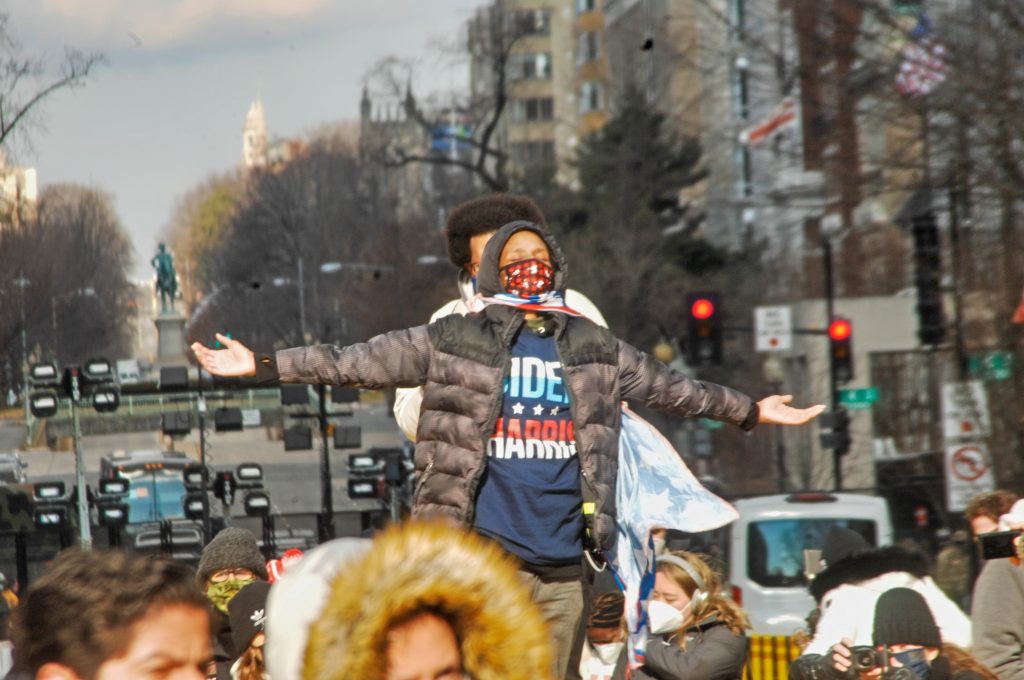 “This was not a peaceful transition of power, sure the close-up imagery of President Biden, Vice President Kamala Harris, and other dignitaries might suggest a peaceful transition, but the footprint says otherwise,” said Philipos Melaku-Bello a DC resident and activist with the William Thomas Anti-Nuclear Peace Vigil. A fixture in front of the white house for more than a generation, the vigil had been moved onto Black Lives Matter Plaza. “The number of troops in the city and the fence walls everywhere make this feel like a combination of a war-torn failed democracy and a prison camp.”

Multiple layers of checkpoints created an ever-tightening redundancy in security that became practically claustrophobic the closer you got to where the new president could be at any point during the day. 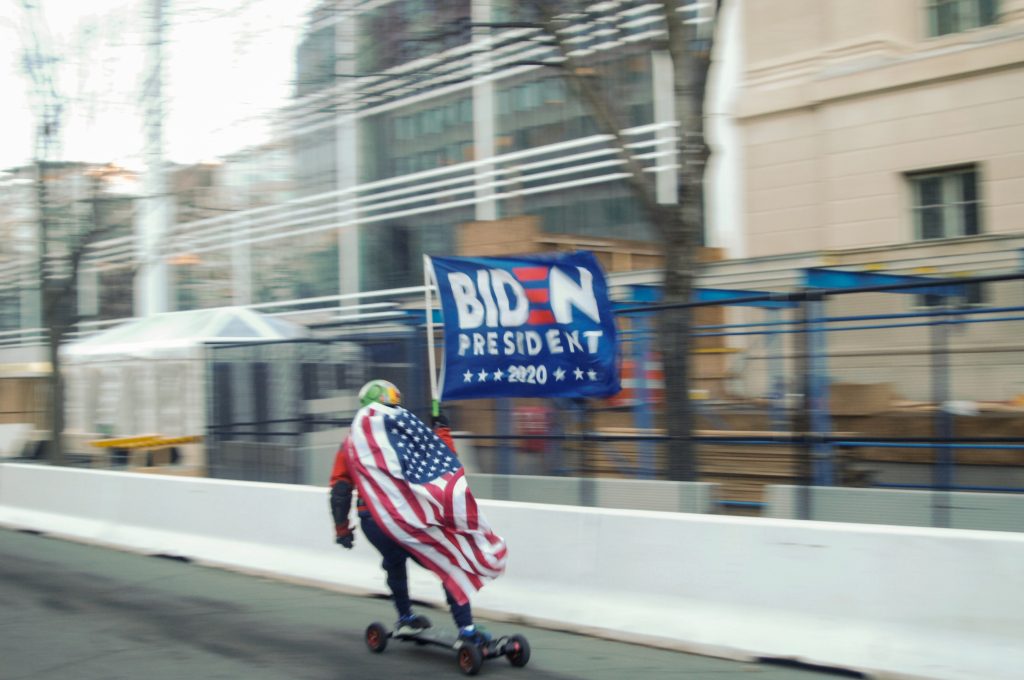 According to a spokesperson for the Secret Service, “The safety and security of all those participating in the 59th Presidential Inauguration are of the utmost importance…To ensure a safe and secure Inauguration Day, we’ve worked tirelessly, along with our with our NSSE (National Special Security Event) partners to anticipate and prepare for all possible contingencies at every level.”

Despite the unprecedented security in Washington, five arrests had been made – four on gun charges – in the days before Inauguration Day. In two separate incidents at checkpoints on 15th Street, and another on 3rd Street, individuals attempted to bring firearms and copious amounts of ammunition into the military security zone. 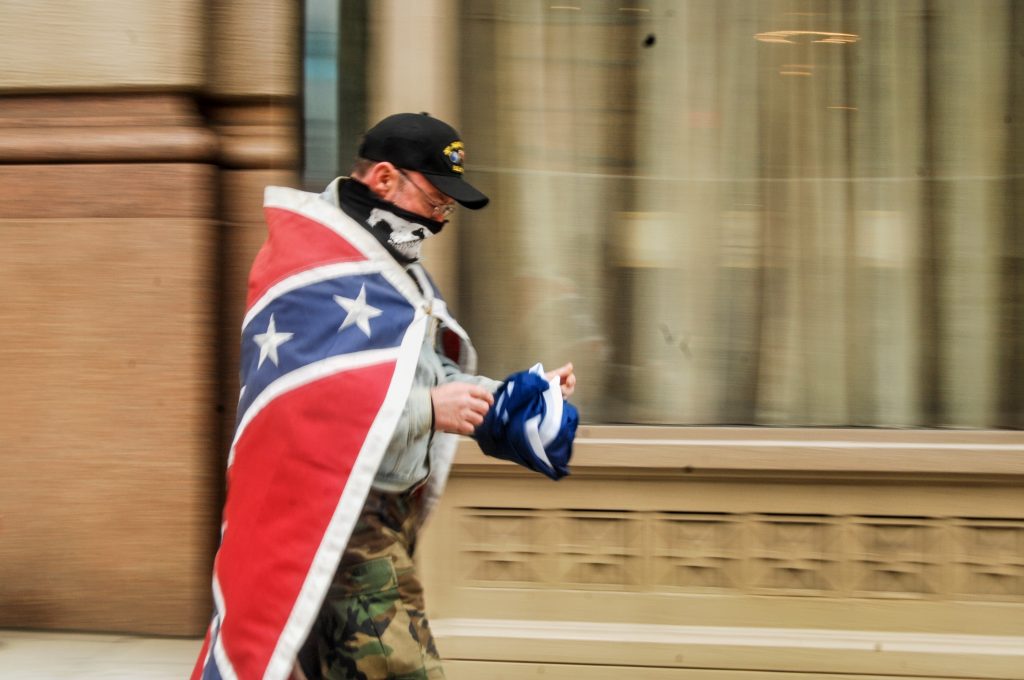 The fifth arrest was for an assault with a hammer that occurred on the 400 block of H Street.

None of this was actually abnormal on its face. What made it different from other inaugurations in the past was the sheer size and breadth of the security apparatus around the Capitol and down to the White House. 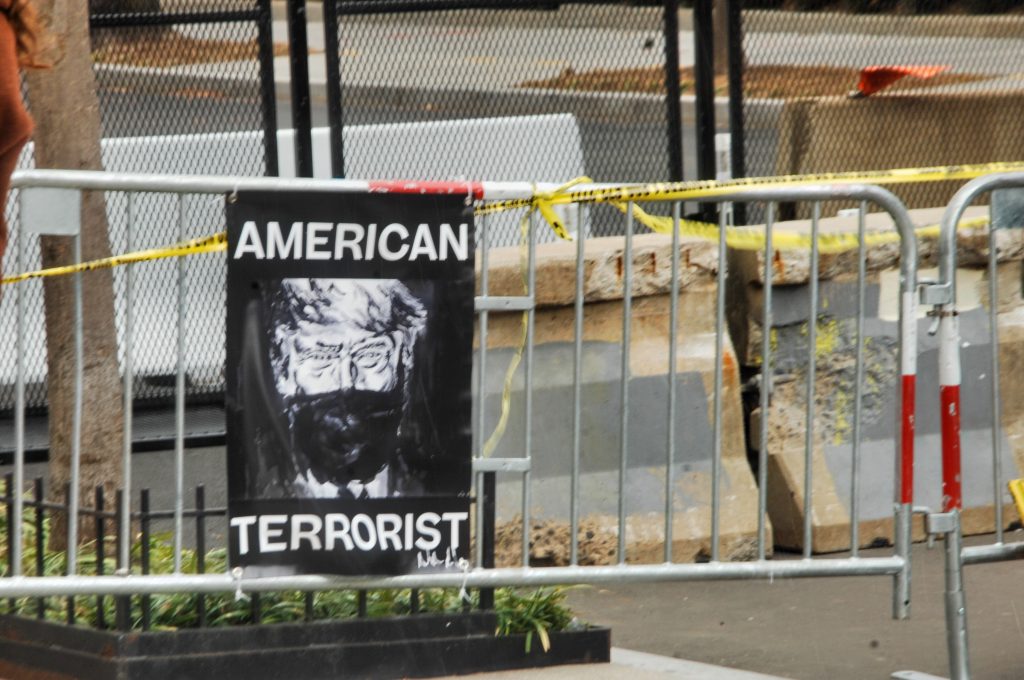 National Guard soldiers patrolled as far out as DuPont Circle, more than a mile and a half away from the White House. During previous inaugurations and NSSE events in Washington, the fencing went out about a block from the event itself, with vehicle barriers about a block past that. In addition to the expanded security zone, there were roughly four times the number of National Guard and police than in recent inaugurations.

“It’s a warzone, you can’t even get around the city, there are so many soldiers and military checkpoints, I’ve never seen anything like it, but we had to be here to support Joe Biden and Kamala Harris. If we can get through this, and the next few months, I think this could be a turning point for our country after four years of rule by white terrorism,” said Tammy Mason, who came from Michigan to see the inauguration. 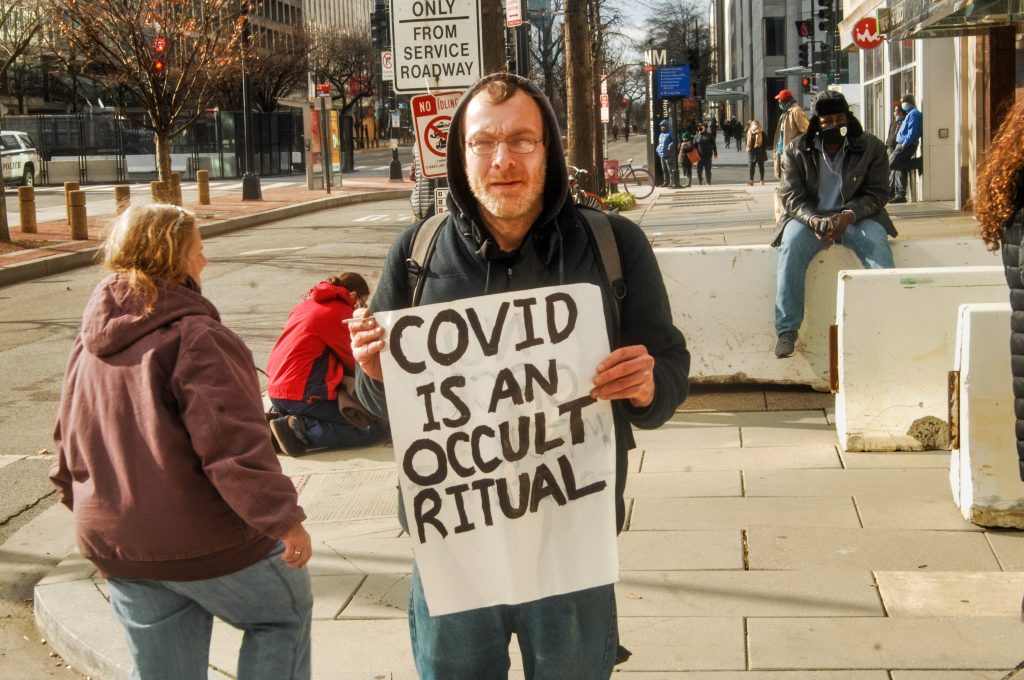 The siege and takeover of the US Capitol two weeks prior and threats of armed protests to prevent Biden and his administration from taking the oath of office and entering the White House have created a situation that threatens the whole of Government.

The increased security presence muted public protest. During the 2016 inauguration protest took place up and down both K and I street as well as down 17th street right up to H street, crowds were allowed on the national mall and filled Freedom Plaza along the parade route. 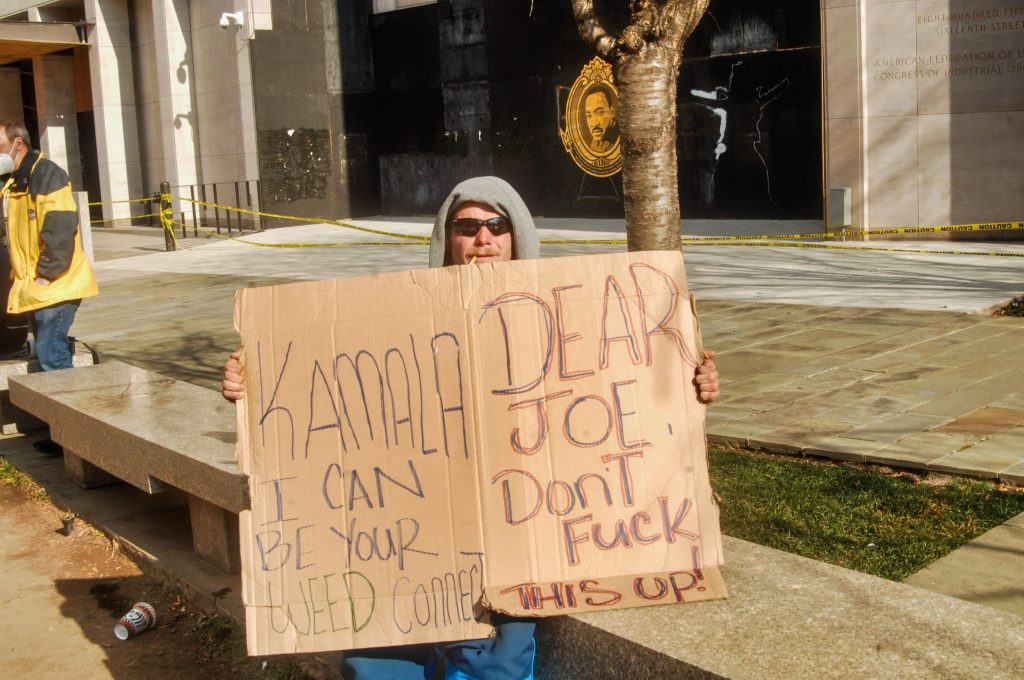 For this inauguration, there were maybe a few hundred people either protesting or celebrating throughout the entirety of the city. Even among those that came out to express their first amendment rights, there was an intense fear that they would be later targeted by federal authorities, keeping their fervor subdued. 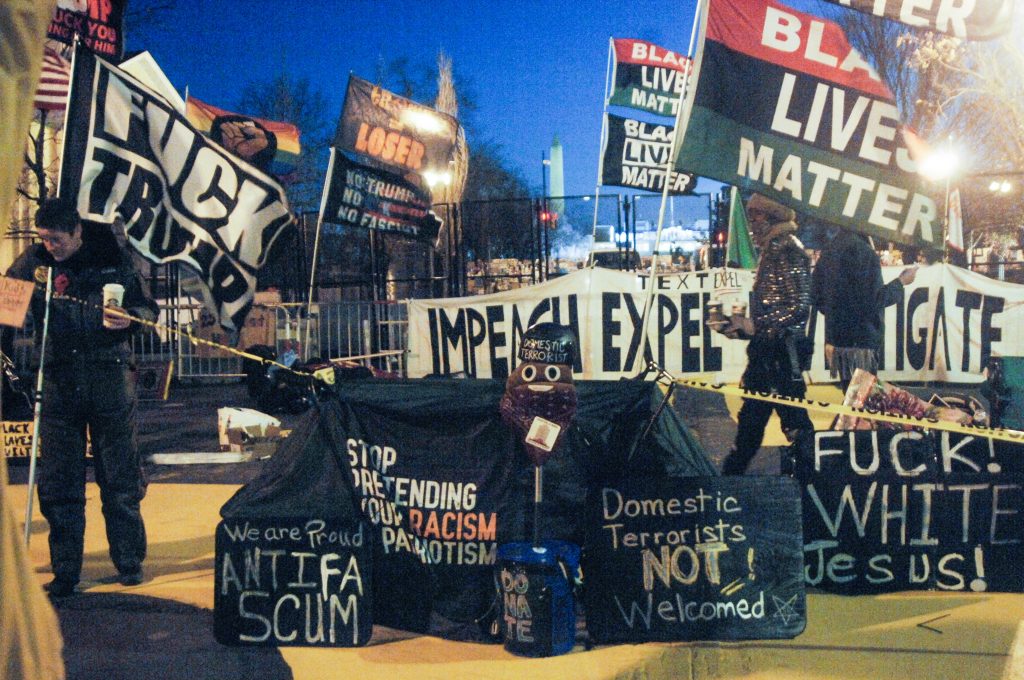 Most of those celebrating Biden’s inauguration were congregated on Black Lives Matter Plaza, from 16th Street and I street to H street, which was as close as you could get to the White House.

Biden supporters rode through the streets on motorized skateboards and bicycles with American and Biden Campaign flags. Others danced in the street on Black Lives Matter Plaza in anticipation, even as snow began to fall and a bitter wind cut to the bone in the moments leading up to Biden taking the presidential oath of office. 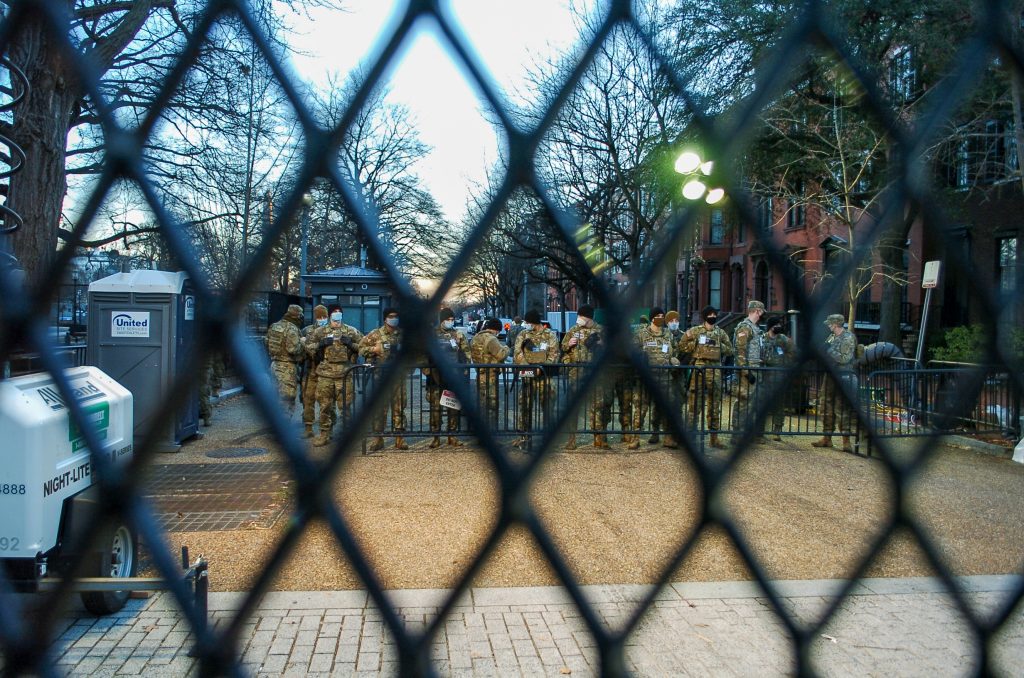 As Biden was being sworn in, the snow subsided. By the end of Amanda Gorman’s poem, the sun had returned with all its glory, as if even the universe was celebrating the ushering in of new era in American history, one where it could be seen as the shining light on the hill once more.

“Yes, we’re out here celebrating, but we’re celebrating in a cage surrounded by tens of thousands of soldiers and police. If that doesn’t tell you all you need to know about where America’s at as a country in this moment, I don’t know what does,” said Melaku-Bello.

“The consequences of the Trump administration, the hate he and his lapdogs fomented, the lies they pushed will be felt throughout this country for a long time to come”, said Danielle Finger, a local activist, and artist living in Germantown. “Hate groups will be able to radicalize more people based on the words of Trump, Fox News, OAN, and the GOP leadership for years if we don’t find a way to hold them accountable. Our nation can’t possibly come together and heal without accountability for those that created this problem. And it’s Black, brown folks and left-wing activists who will pay the price for their racist, anti-American rhetoric and actions.”

About Cory Clark 47 Articles
Cory Clark is a Photojournalist and writer focused on Human Rights and other social issues. His work can be found in hundreds of media outlets from Philly Magazine to Fortune. He has been a long time freelancer for Getty Images, The Associated Press, and Association French Presse. Cory, his wife, and son are residents of East Germantown.

Historic local landmark gets $60 million overhaul, including a new pool, dog park, and a gourmet outdoor kitchen (?!) plus rumors of first-floor retail. What else is going on in this far corner of East Falls? [more…]

Wistfully caught in ticking traps, given a cozy bubble bath and delivered directly to your fidgety hands by Dr. Karl von Lichtenhollen [more…]