No hills, all thrills through NW Philly and beyond.

Recreational cyclists, lean in. There are so many long, flat bike routes in this area, you can ride ten, twenty miles – even more — and barely break a sweat. Better still, many of these paths follow rivers and canals through some really beautiful and historic local scenery.

Steve and I discovered Rail Trails during the months of quarantine, when the city’s bike paths were too congested for comfort. So we looked to the suburbs and the rural pockets beyond, and struck jackpot. Rail Trails are multi-use paths repurposed from defunct railroad lines. Our area is full of them!

Railroads at first were a cheap way to get commodities like minerals and farm goods to market. Then they became a major catalyst for an area’s industrial-based economy. Here in NW Philly, our mills made material that was shipped back to Europe to be tailored into fashionable garments for resale around the world.

Our region, too, became one of the first energy hubs thanks to the Schuylkill River which starts way up near Pottsville – an area rich in anthracite coal, highly valued as the purest, cleanest, longest-burning variety. An early trade route to Philadelphia had already been established by mule barge. The trains ushered in a full-blown boom.

Trains carried people, as well. The Philadelphia-Trenton Railroad connected with the Delaware river, where steamboats awaited passengers bound for busy port towns and popular resort destinations. A one-way fare on the P&T from Kensington to Morrisville NJ cost $1.50, and took about an hour.

By 1860, Pennsylvania surpassed all other states in total railroad mileage, a position we held through the industry’s peak in 1920, when more than 11,500 miles of active tracks webbed through the state. 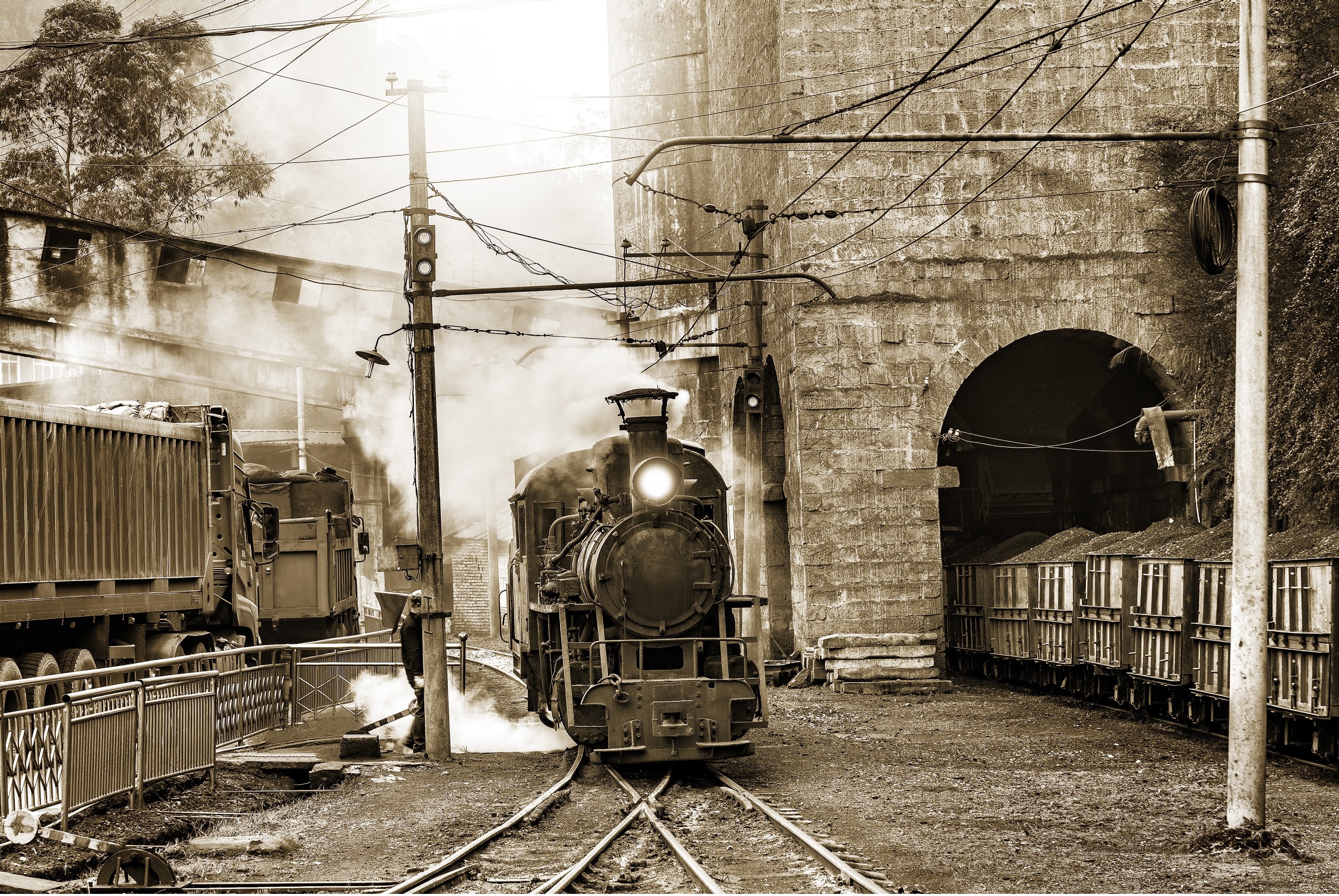 Check out all the lines that once ran here:

Despite all the stories about “Robber Barons,” railroads were never great money-makers. Upkeep alone required a constant fleet of engineers and laborers, not to mention local politicians to negotiate right-of-ways, taxes, inspections… It’s easy to see how other forms of transportation – trucks, planes, ships, pipelines – proved more efficient as the country developed.

We now lead the nation in miles of Rails-to-Trails. The exact number is fluid, since we’re constantly adding more. To date, we’ve got about 200 rail trails, with like 2,100 miles of easy riding, providing safe and accessible routes to work, shopping, parks, and services.

And Rail Trails are so fun! Practically effortless, too: trains don’t do hills, so you don’t have to either. Our tandem is a heavy bike, even without the saddlebags full of drinks and snacks (which they often are). Still, we can easily go 20 miles on a Rail Trail, and break halfway for adult beverages. It’s a beautiful thing. 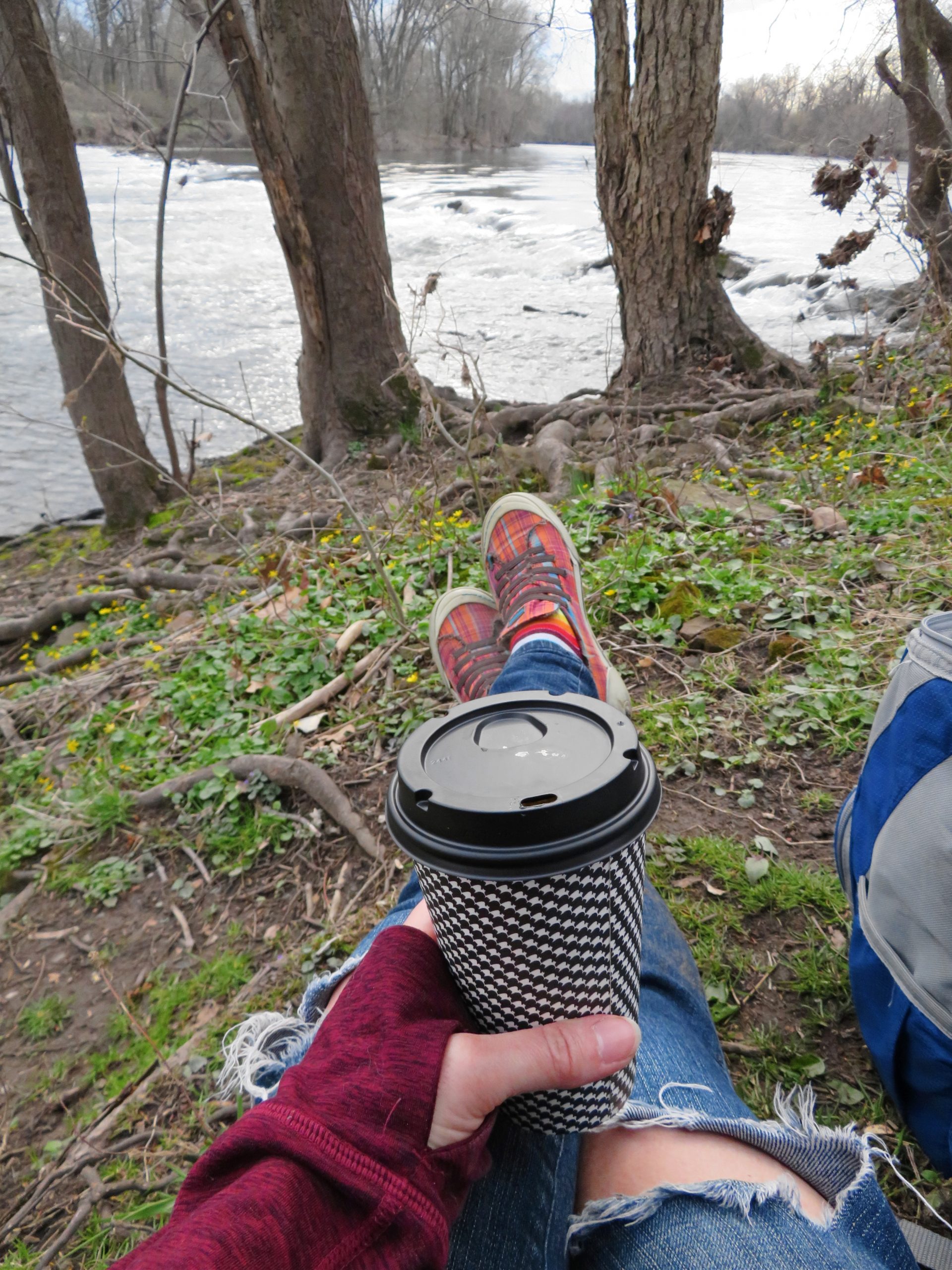 Rail Trails are also very safe, as motorized vehicles are generally off-limits. Speaking of cars, many trailheads are conveniently located near business districts with ample parking. Did I mention the scenery?

So many favorite Rail Trails – it’s hard to choo-choo-choose the best one (sorry). Here are our top five recommendations, for more details please click on the links to more information. We also post our rides to LOCAL-motion, a pubic Facebook group for recreational cycling – feel free to comment and share.

Right in our own backyard! Hop on School House and follow it west where it ends at Ridge Avenue. Hang a left and pedal till you see the Falls Bridge where paths on either side of the river can have you downtown & back in about 8 miles. Instead, try turning right at Ridge Avenue, to follow the SRT into nature and history.

Warning: traffic into Manayunk can be dicey. We’d rather drive and find parking at the bottom of Leverington Ave near the towpath (E. Flat Rock Road). From there, you’ll ride a boardwalk over quiet water alive with turtles, blue herons, kingfishers, geese… There’s a park at Flat Rock Dam, and beyond this the trail’s shady and green, dotted with random benches.

And paved! A few miles after you pass the Schuylkill Center for Environmental Education, you’ll reach Conshohocken Brewing Company’s welcoming back deck which opens to the trail and greets travelers with free water, abundant bike racks, and even a little repair station. Keep going through Norristown and you’ll soon get to Valley Forge, where we usually turn around (there’s a nice 5-mile loop thru the park, but it’s very hilly).

A little farther north, the SRT connects with another favorite route, the Perkiomen Rail Trail.

This Montgomery County trail goes from Oaks/Valley Forge to Green Lane, PA, a small town with a population barely over 500. There’s a fantastic park here, with a lake, nature center, picnic tables, boat rentals, overnight camping… Or so we’ve heard. We’ve only gotten as far as Schwenksville — we turn around roughly at the Philadelphia Folk Fest grounds, before a big incline we’d rather not deal with.

Our stretch is awesome, anyway. We park at Upper Indian Head Road in Upper Providence, then bike out to beautiful views and cute college-town vibes with little shops and cafes visible from the trail. The Collegeville Diner offers seating under a big open outdoor tent, and DaVinci’s Pub offers fine Italian family-style dishes. There’s even a brewery, Troubles End Brewing, with a patio and a full menu.

A nice, no-nonsense trail, our go-to when we just want to ride but don’t want to put too much thought into it. Almost 15 miles of wide, flat, paved path thru Chester County from Exton to King of Prussia. Pleasant scenery: ample shade, lots of birds. Spotless porta-potties. Some road crossings and shopping centers along the way, but nice parks/picnic areas, too. Never crowded, and the parking is always plentiful.

This one’s a little tricky: 14 miles, but only about half is a Rail Trail. The rest is quite hilly – just one or two brutal climbs, though, most are do-able with some moderate pedal-pumping. In return, you get spectacular Pennypack Park, with 1,600+ woodsy acres along lazy Pennypack Creek as it lolls thru MontCo to the Delaware river.

Nature feels bigger and wilder out here, yet there’s great people-watching too. Like Forbidden Drive on steroids! You’ll also find a 17th century stone arch bridge, an environmental center, and lots of cool spots to pull over and drink in the views. Including “Death Gulch,” site of a fiery train collision that gruesomely killed 27 people in 1921 – and effectively cancelled wooden passenger coaches forever after.

A truly massive trail: 142+ miles from Wilkes Barre through Bucks County and out to Bristol. Former railways and canal towpaths, this trail has some of the most photogenic scenery along the Lehigh and Delaware rivers. When all the gaps are filled, it’ll reach all the way to Jim Thorpe!

Our favorite stretch so far is the Delaware Canal State Park, a historic towpath lined with charming red bridges and homes of all sizes, styles and time periods. We park near the Morrisville municipal building and in less than a minute we’re gliding down a well-packed dirt path, leafy cover above and glittering canal below.

At one point, the Delaware River cuts in, and the trail is just a little strip of earth between two streams of moving water, one crashing over rocks, the other so calm it’s like a painting. We’ve made this run in every season, each one more beautiful than the next. If you’re able, plan a stop in nearby New Hope.

HONORABLE MENTION: the Slatington branch of the D&L Rail Trail (near Allentown) is a super fun ride, too – it’s in the mountains! A crushed stone path leads through dense forests, towering cliffs, breathtaking river views and even a waterfall. There are parks, ruins, museums, canoe rentals, historic offshoots and overlooks. It’s a haul, though: almost 90 minutes up the turnpike. Pro Tip: make it a getaway with a stay in one of the area’s many adorable & affordable airbnbs.

Who knows? Our system of rails-to-trails could repeat history, and once again link communities throughout our state and beyond. PA’s Department of Conservation & Natural Resources’ stated goal is for every citizen to be within 15 minutes of a trail, making closing gaps in our current trail system a top priority. And with good reason. Studies show rail-trails inject $930 million annually into our economy. Pedaling pays, people!

We hope you’ll have as much fun exploring these trails as we do. If you’ve got local biking tips or routes to share, please comment below or email editor@nwlocalpaper.com.

Spectacular views from this local landmark, now opening for sunrises and sunsets. [more…]

Hit the road for biking adventures and a traveling beer garden at McMichael this Summer. [more…]