Breaking bread with the Undead in Philly’s most haunted restaurants

Philly has lots of places to grab a bite this fall, but if you’re looking for your meal with a side of paranormal, there are a few spots where you can dine with guests who may not have a reservation. Mwahaha….

Sea sickness could be the least of your fears when checking out Moshulu, which is a renovated restaurant and party venue on the water along Christopher Columbus Blvd. The historic ship sailed for over 100 years and was named the fastest cargo ship in the world at one point. It was even pillaged by the Nazis during WWII.

Today, guests have reported the spirit of a woman, potentially the wife of a sea captain, lighting lanterns mysteriously during the night and whispering secrets of the ship’s travels to diners. When psychic medium Joyce Keller visited Moshulu, she described an “incredible, palpable” swell of energy just standing outside, observing “sailors all over the masts” — some of whom were not aware they’d crossed over. “It’s a fun ship too,” she said, “I don’t think anything really bad happened here” although she did intuit there were multiple deaths aboard which seem to be related to a lot of paranormal activity.

Moshulu is also one of the city’s most beloved fine dining establishments, offering award-winning contemporary cuisine in a variety of spaces from intimate dining rooms to open-air decks with spectacular views. A great spot for private events, too — if you don’t mind otherworldly guests popping in uninvited (don’t worry, they don’t eat much). 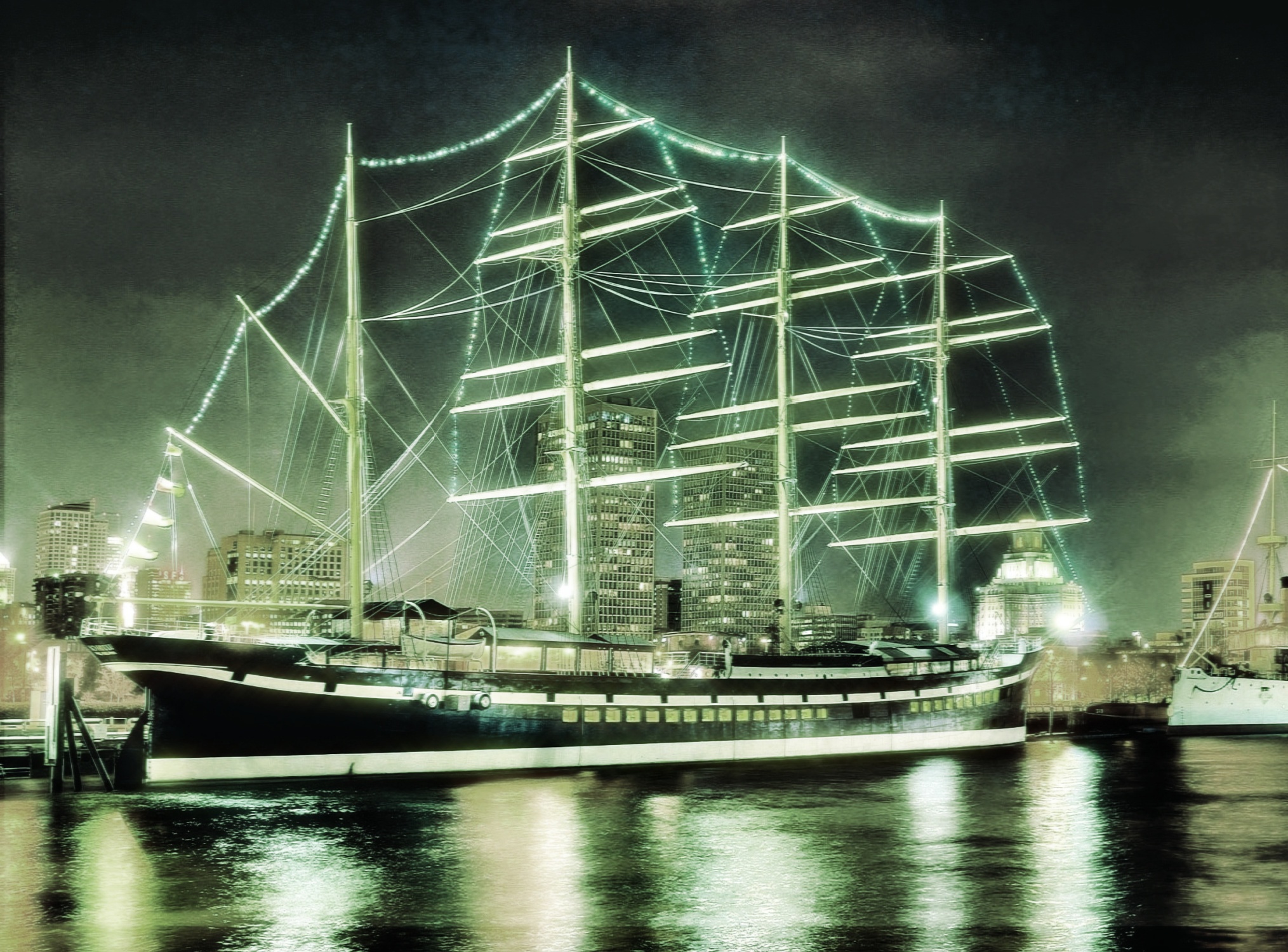 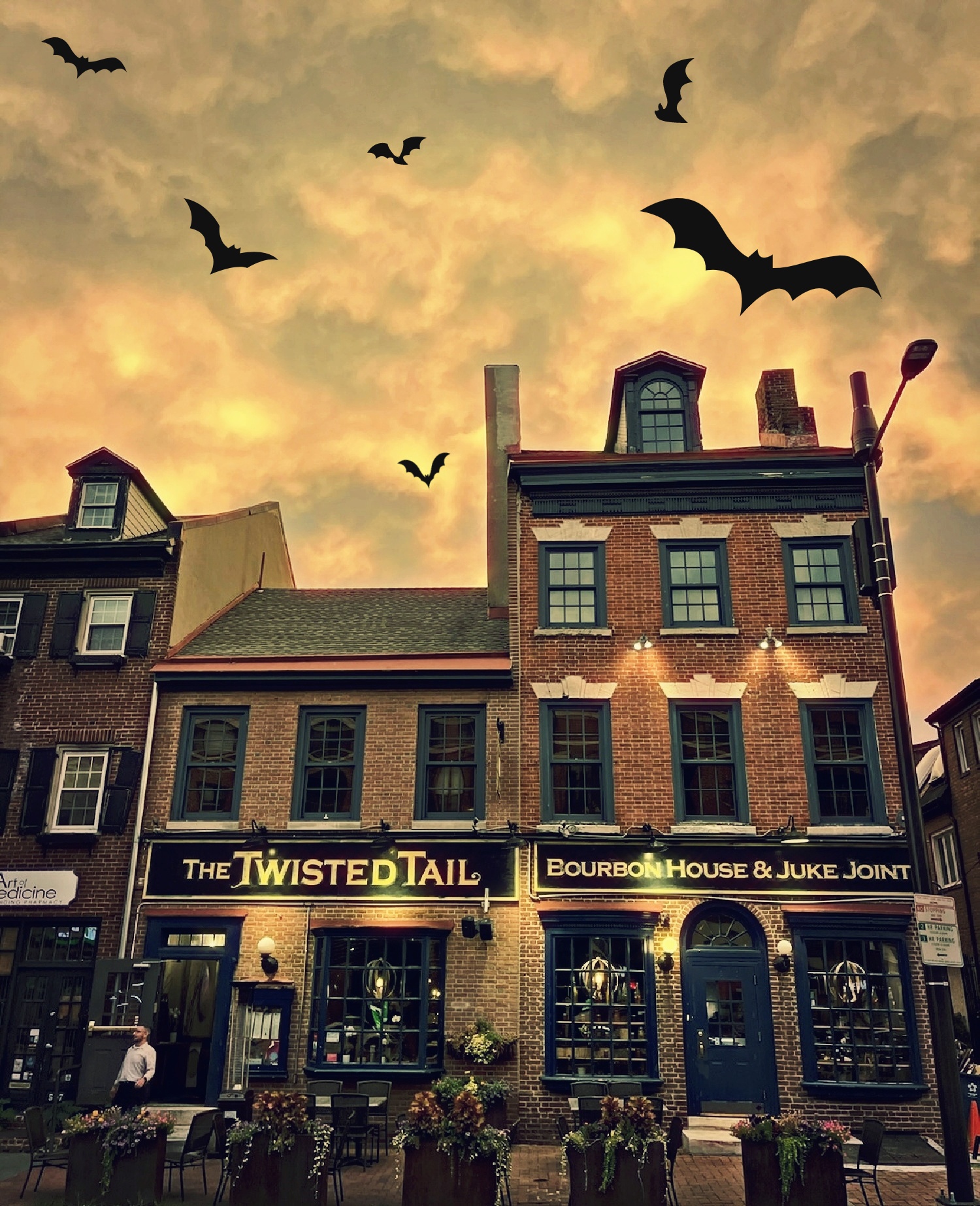 Society Hill is a neighborhood filled with historic sights and quaint shops, but it is also home to The Twisted Tail, a supposedly haunted restaurant, bourbon house, and live music venue.

The four-story building has given staff members many stories to run home about, including heavy footsteps when the building was empty, floating objects, and overall creepy feelings. One evening, a hat hanging on a back wall suddenly flew off, landing in the middle of the room. Then there’s that time everyone swore they heard the sound of bar stools moving across the floor — but they checked, no one was there.

A paranormal investigation even recorded mysterious clinking and whistling sounds in 2015. If you want to sip on a bourbon, listen to live jazz, and have a mysterious chill run down your spine, this is the dining experience for you.

Pro Tip: start with one of their charcoal-fired small plates, expertly complemented by your choice of Whiskey Flights curated for different palates. Flights also pair well with plates of artisanal cheese and aged country ham, in addition to a full menu of Southern-inspired dishes: smoked wings, Blue Point oysters, short rib ravioli, and fried chicken. There’s even a crawfish mac & cheese, if you dare….

One thing about being scared, it can make you very hungry for human companionship! Head on over to McGillin’s Olde Ale House, for good craic and conviviality. The city’s oldest Irish pub, this Center City landmark is supposedly haunted by “Ma” McGillin, who owned the restaurant with her husband William. After “Pa” died in 1901, she ran the place herself for over 30 more years until she died in 1937 at the age of 90. She was one of the few female proprietors in Philly, a well-respected woman who ran a clean, reputable establishment, beloved by her peers and customers.

Cooks and staff have reportedly sensed the ghost and seen shadows of Ma while working. A longtime manager in the 1970s & 80’s insisted Ma’s spirit followed her on the first floor, In 2011, paranormal investigators snapped the image of a figure in white reflected in a mirror over McGillin’s fireplace. 😱 There has also been reported activity associated with the current owner‘s great uncle, who died in the alley behind the pub and apparently pops back in on the anniversary of his death.

If you decide to stop in for a drink or meal, I’m sure Ma would love to share a pint with you! 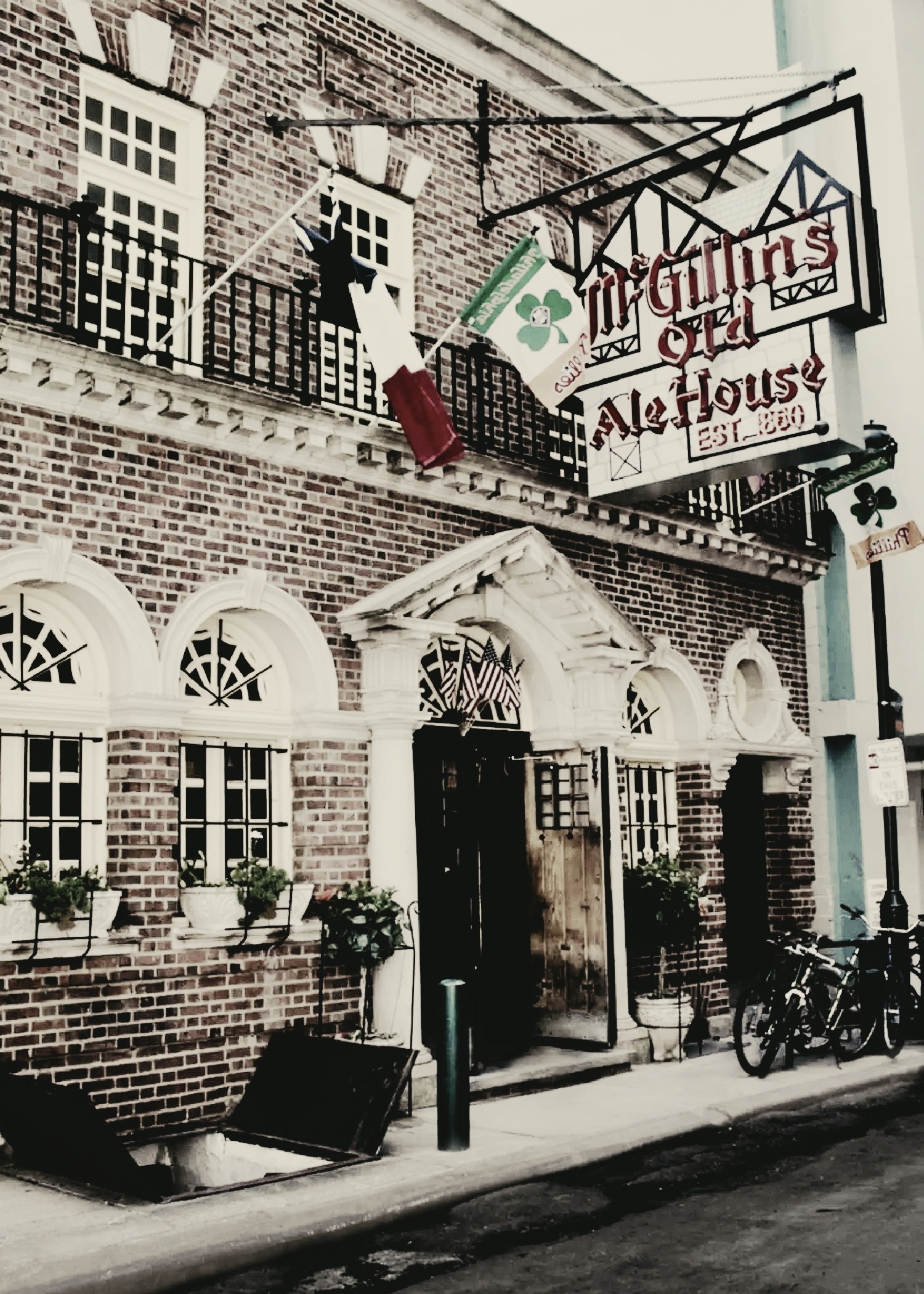 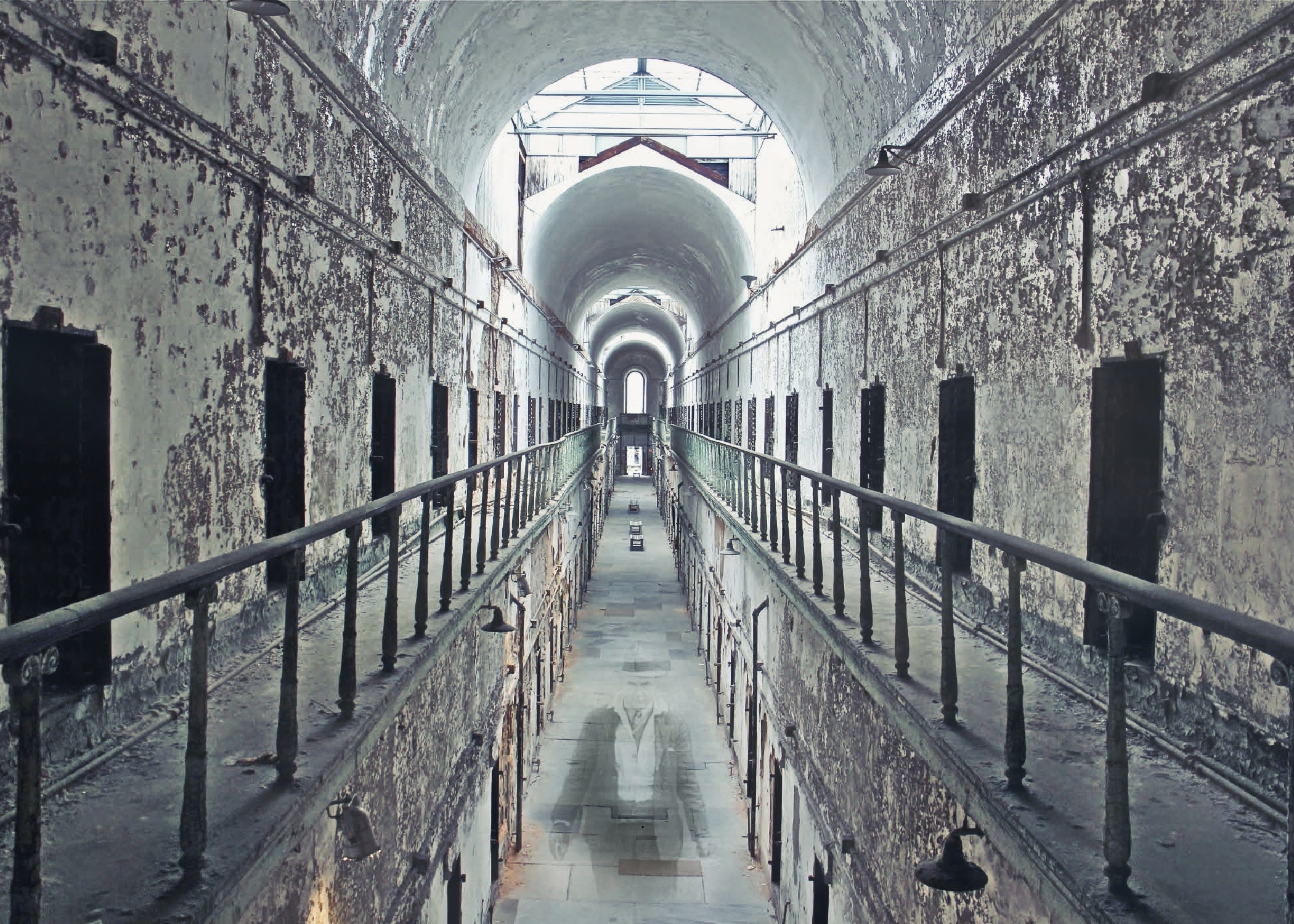 Eastern State Penitentiary in Fairmount hosts many visitors this time of year, most hoping to get a glimpse of a haunted cell or just experience the adrenaline of touring a retired prison.

The penitentiary was the most famous and expensive prison in the world during its prime and housed thousands of prisoners during its 142 years, some notable residents being Al Capone and Victor “Babe” Andreoli, who murdered a state trooper and escaped Eastern State (he was caught and returned).

Today, it’s a historic and infamously haunted site that offers both day tours year round and Halloween tours on select nights between September 23 – November 12. After the Halloween tours, you can get seasonal drinks/treats at their Speakeasy at Al Capone’s Cell, Bloodline Lounge, or The Fair Chance Beer Garden (by Triple Bottom Brewing).

Being such a historic city, there are plenty of haunted sites to discover. If you’re looking to have a boo-tiful night out this Fall, you should make a reservation at one of these haunted hot spots! They will be waiting for you.

McGillin’s Old Ale House
1310 Drury Street
(215) 735-5562
The oldest continuously-operating tavern in the city, opened in 1860 — the year Lincoln was elected president. Today, it’s a Center City staple offering solid grub and seasonal pours (plus all the classics, too). Great place to cheer for the home team with die-hard fans, or just kick back with karaoke and drink specials.

Eastern State Penitentiary
2027 Fairmount Avenue
(215) 236-3300
Charles Dickens was inspired to write about the horrors of solitary confinement after visiting here on a US tour in 1842. Closed and abandoned in the 1970’s, this historic landmark sprang to life again in the 1990’s as a community space for arts, education, and really creepy tours. These days, Eastern State offers a thrilling variety of tours, events, and exhibitions including Halloween Nights with FIVE haunted houses, themed bars, live entertainment and more. (Oct thru Nov 12th).

About Eleni Finkelstein 5 Articles
Eleni Finkelstein (aka @gingersliketoeat on Instagram) is a South Jersey and Philadelphia-based food blogger and journalist. She loves traveling, trying new foods, and cheering on Philly sports teams. You can check out her book, "Eat Like a Local: South Jersey" on Amazon.

Phils win National League pennant — then it got even better! [more…]