Consider the male gaze – the target audience for most American cinema. Even when the theater-goer is not male, the point of view is usually that of a cisgendered, (white) man. This influence can feel subtle, even unconscious in the artificially-created darkness of a movie house. Men reverses this conceit in the first five minutes: this is NOT your average horror film. Viewers, strap in for a radical subversion of the male gaze, and its implications…

Harper Marlowe (Jessie Buckley) is a nice white lady who decides to take a holiday at a remote country village following the death of her husband James, who is black. Harper has told James she wants a divorce and he threatens to kill himself if she leaves. We see James’ end through Harper’s eyes, as he hurtles to his death from the balcony of the apartment above where they live.

James’ suicide happens at the start of the movie, and provides haunting images that set a pervading tone of dread. We “see” Harper watch James plunge past her horrified gaze, his arms flailing toward her in slow motion. With her eyes on James, we view his face as she does, for he stares directly, disturbingly, into the camera as he falls. The male gaze, no longer dominant and losing power by the second. 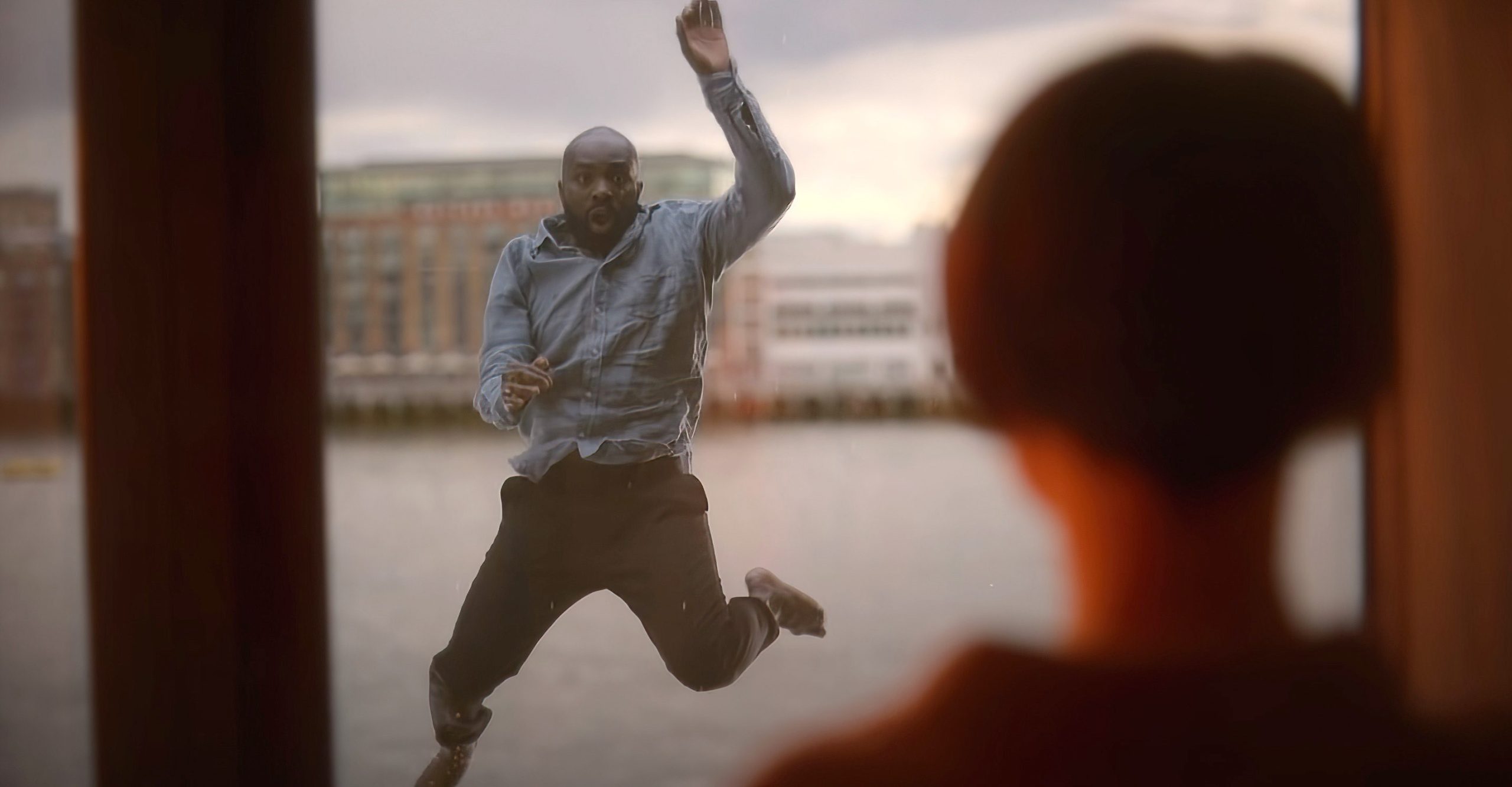 When James finally lands, he’s impaled on a stake – penetrated, if you will. From that abrupt and violent beginning, the action moves to the “feminine” environment of a serene country estate, where Harper tours the beautifully-appointed house with its eccentric owner, Geoffrey (a brilliant turn by Rory Kinnear).

The floral decor, the meticulous window treatments, the narrow passageways leading into expansive rooms – even the apple tree out front — all add to the encompassing air of femininity. After getting herself situated in this setting, Harper seeks to get a broader lay of the land. Well, we all know what happens when “little girls” go walking alone in the woods….

The dark and scary forest is, of course, the stuff of American legend; however it’s also the realm of the female, of Mother Nature, of fertility. Flowers, plants and trees are symbolic of birth. Harper’s walk is interspersed with floating dandelion spores. The choice of flower isn’t random: dandelions are self-pollinating.

As Harper continues her walk, she comes to a tunnel. Looking through the tunnel to the other end, she sings a brief note that echoes back to her. Mesmerized by the sound of her voice, she continues to sing more notes, which are caught and carried back to her through the cavernous tunnel. Most viewers will make the obvious Freudian connection. 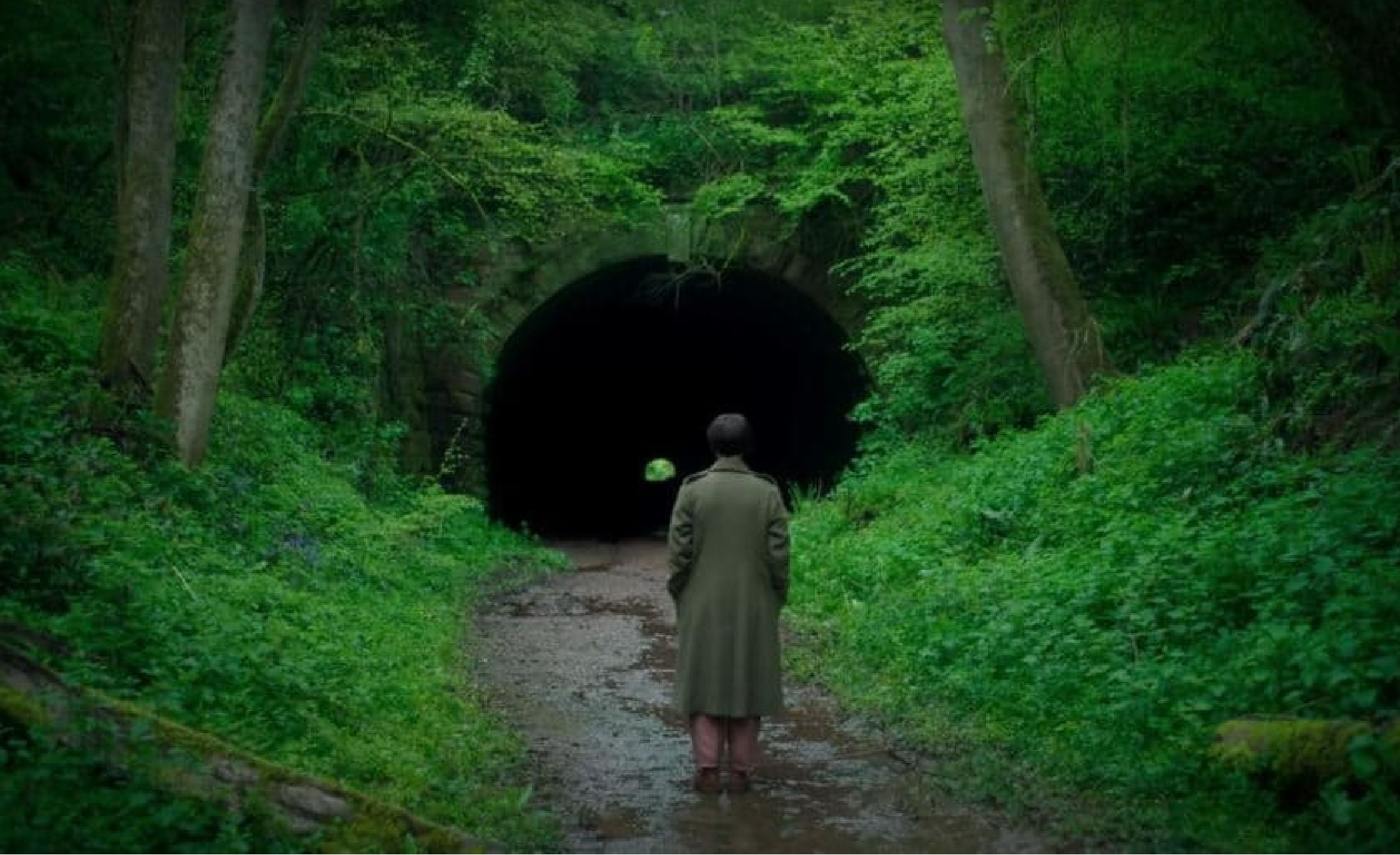 So when Harper suddenly sees a person at the other end of the tunnel, we’re left to wonder if the figure isn’t her own reflection in some way? Later in the film, a male vagrant who has been loitering on the property provides a convenient explanation. But is Harper convinced? Are we? As she continues to sing into the tunnel, Harper soon hears her echoed song morph into a scream of terror….

I don’t want to explain the whole movie, so we need to skip ahead now to talk about how powerfully unsettling it is. This film made me so uncomfortable. With every scene, I felt myself squirm a little more.

Harper comes into contact with a series of extremely creepy men, including a vicar that tries to blame Harper for her husband’s death (you know, because as a woman, she should have been more compassionate, more “womanly”). There’s also an ultra-demanding kid with a preternaturally large head who insists that Harper play with her. Something else was weird, too.

I whispered it to my niece, who was with me, “Is it me? Why do all these white men look the same?” It was a strange experience — I was afraid I would be overheard. I kept wondering, ”Is this what racism feels like?”  Yeah, well, the joke was on me, eventually, as the plot spun into truly mind-bending territory.

Garland hits us with a BAM! This final act is pure WTF in all its glory. Things got so messed up I turned away from the screen and told my niece, “I can’t!” But she just laughed and said, “Yes you can!” and she was right. I was spellbound, as a gender-bending gorefest unfolded with searing imagery. 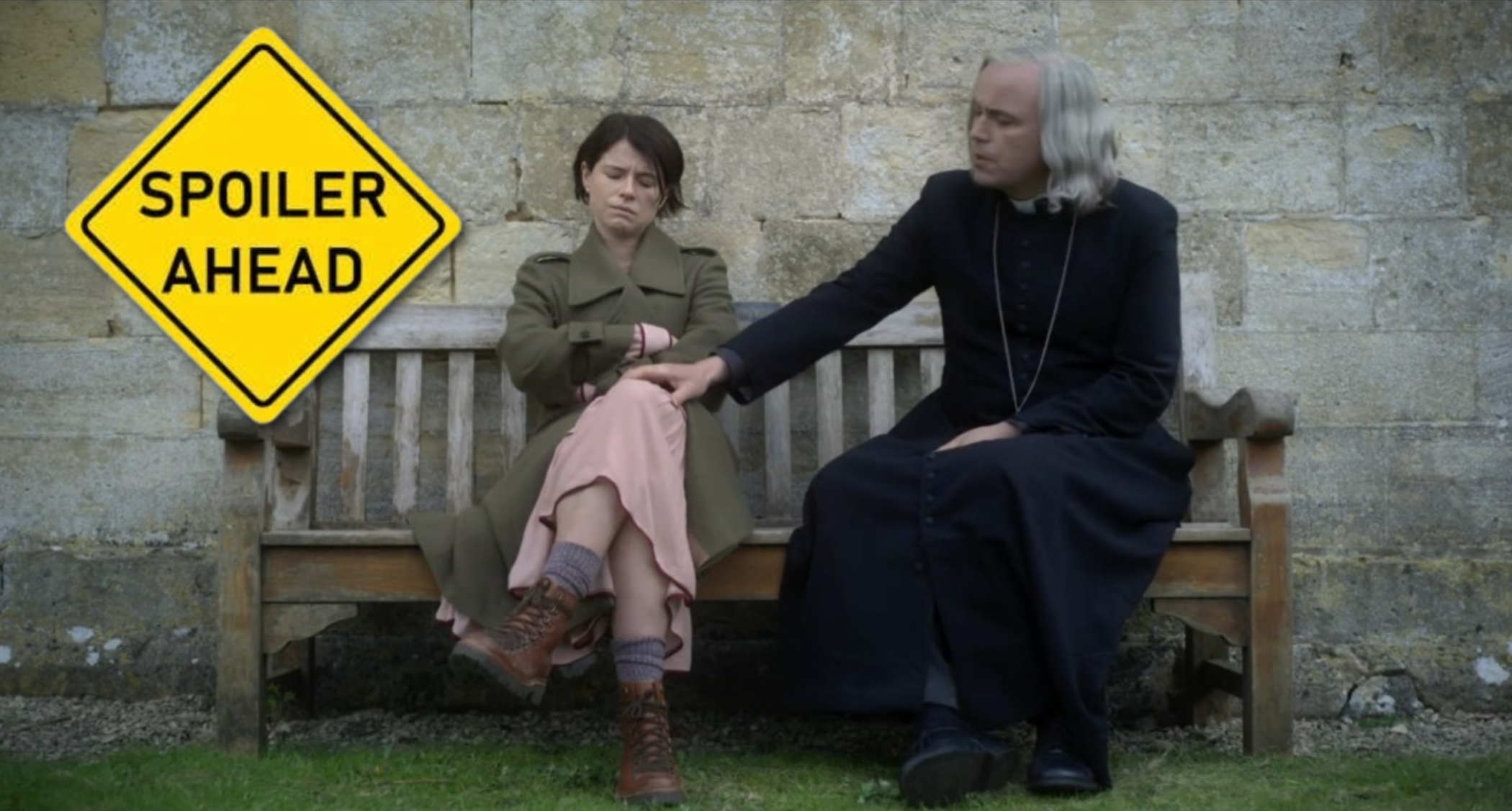 **WARNING! IF YOU HAVEN’T SEEN THE MOVIE YET SCROLL THRU TO NEXT IMAGE**

So after an inexplicable near-rape scene where the vicar blames Harper for enticing him with her wantonly wiles, she “kills” him. This is not as straightforward as it sounds, because all the men that are “killed” suddenly develop birth canals and rebirth themselves (more like another iteration of the self), but the point is, one of these white men who are ALL BEING PLAYED BY THE SAME ACTOR gives birth to Harper’s African American husband!

By this point, Harper is plain exhausted. She merely asks her husband what he wants from her.  Are you ready for the answer? Hang on cause it’s a doozie: Harper’s husband says he just wants her to love him!

What?!  So this guy has crawled back from the Great Beyond — out of another man’s nether regions – just so Harper can say she loves him?  What a selfish prick! I left the theater frustrated and disappointed. But I kept thinking about this movie….

After sitting with it for awhile, I began to appreciate the skillful way Garland flipped a common trope on its head to create what I believe is a very damning commentary on toxic masculinity in our society. With every hard-fought advance for equality, there’s constantly the risk that this monster will “rebirth” itself and drag us right back where we started from.

At least that’s what I got from it. I hope you’ll see it and decide for yourself. In addition to being an innovative and unforgettable film, it was also beautifully shot, with impeccable setting and acting. I enjoyed the moody atmosphere, and how the plot was impossible to predict.

Five stars out of Five.

Men opened in 2,212 theaters in the US over Memorial Day weekend, earning $3 million and coming in fifth after Doctor Strange 2, Downton Abbey, The Bad Guys and Sonic the Hedgehog 2. Although it’s no longer playing locally, you can stream via VUDU and other platforms soon.

David Jackson Ambrose has published three novels that explore the intersections of race, disability, and class. His first, State of the Union, was a Lambda Literary finalist (2019). David is graduate of the University of Pennsylvania (Africana Studies) and holds an MA from St. Joseph’s and an MFA from Temple. He currently lives in East Falls.

His latest book, Unlawful DISorder, released this May, provides a gripping, immersive and unflinching ride with raw dialog and unforgettable characters. For more info: davidjacksonambrose.com 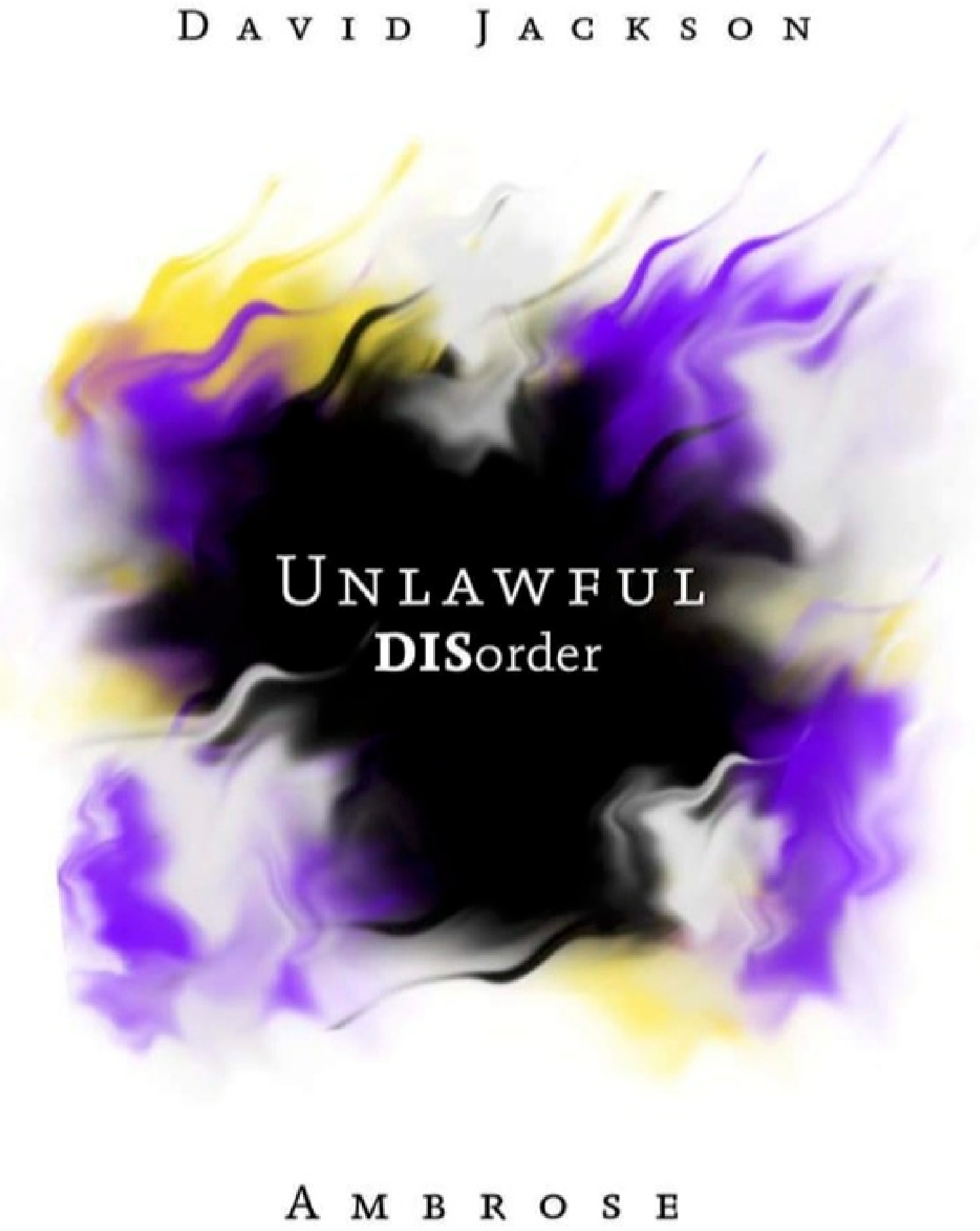 Bowie Long has been in treatment for his mental health disorder since he was eighteen years old. But the experts can’t give him a diagnosis. Is he bipolar? Schizophrenic? Is it a personality disorder? He also has a gambling compulsion. An encounter with the police derails his treatment and thrusts him headlong into the US Prison system, overcrowded with sickness it is ill-equipped to handle.

“A breathless read, capturing the messiness of mental health.” – KirkusReviews.com

About David Jackson Ambrose 2 Articles
David Jackson Ambrose is the author of three novels that explore the intersections of race, disability, and class. His first, State of the Union, was a Lambda Literary finalist (2019). David is graduate of the University of Pennsylvania (Africana Studies) and holds an MA from St. Joseph’s and an MFA from Temple. He currently lives in East Falls.

A Day in the Life

Therapeutic theater of the mind…🤯🌶🤣‼ [more…]