An upset or at least a surprising development:  this year’s Wing Wars actually determined a winner! Like, people actually completed and submitted our scorecards!

Well, one person did. <ahem>

Which is 100% more than last year, including ourselves who you’d think would have some follow-through. Wings are such a yummy fried treat, though, it’s hard to get picky when we’re so happy to be tucking in. 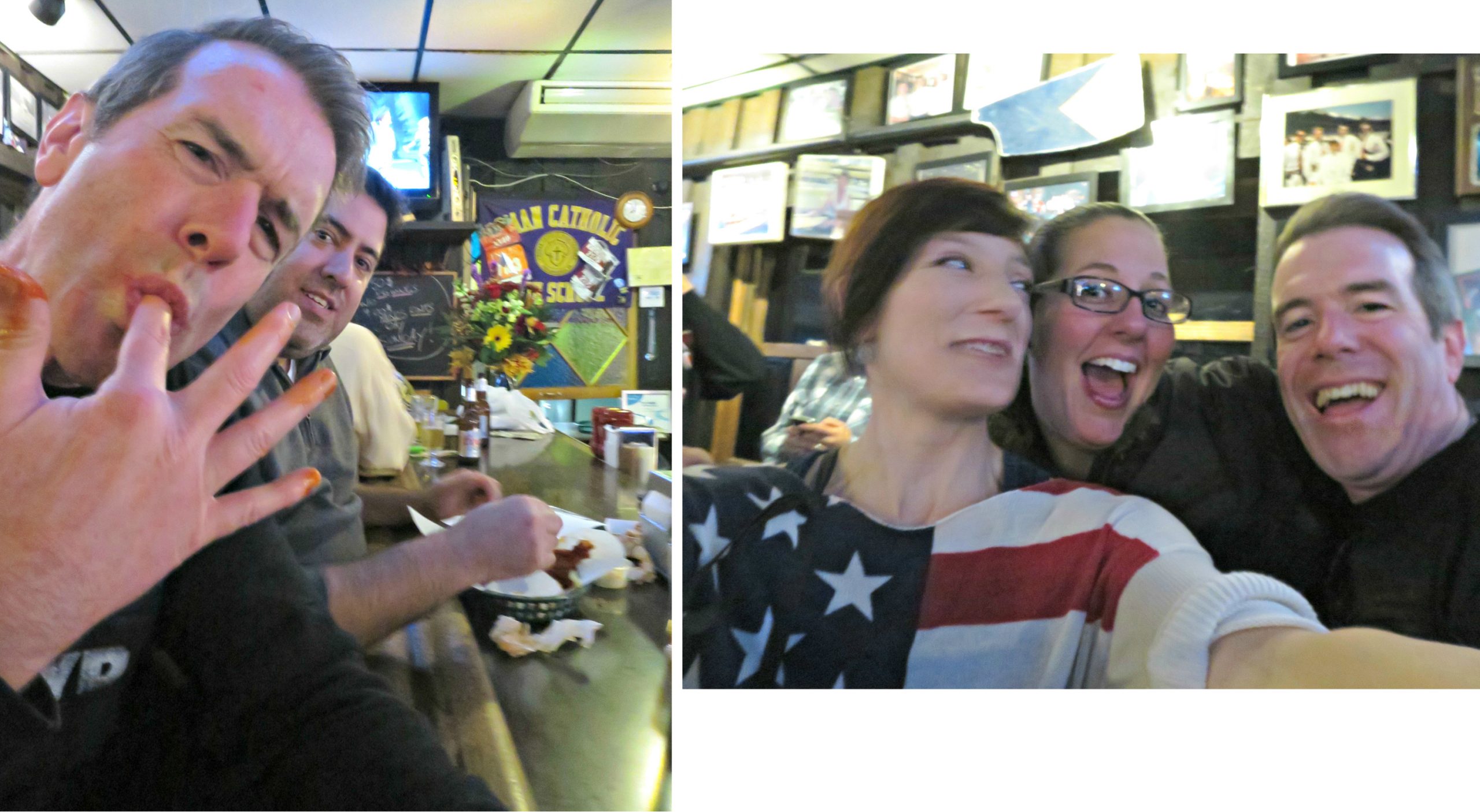 So thank you, lone voter! And thank you for all our friends who came out to wish us well in our Buffalo chicken bonanza, including:  Heather, Dennis & Carly, Morgan, John, and Scott “the Mayor of Gypsy Lane.” And thank you, Marco, for chasing after me with my backpack (whoops, really need to tether things to me when there’s beer involved).

So the verdict? DRUM ROLL PLEASE….

Their “crispier and cleaner to eat” wings win this year’s Wing War by three points in our highly-scientific survey, but also comments disclosed when the scorecard was submitted indicated the specific reason for his/her judgement.  We find this particularly interesting because last year this same distinction split us — some people like saucier wings, some like it better when the sauce is more fried into the skin. Which come to think sounds kinda barbaric but yum.

One thing we all agree on:  Murphy’s has a serious edge if you like interesting beer. While Cranky Joe’s sticks with the classics — not hating on Yuengling! — Mike Murphy & his beer-loving bartenders take care to rotate seasonal offerings on taps & in bottles. Mango wheat beer? Peanut butter stout?  Yes, please.

To sum up:  everyone’s a winner when you come out to this lively corner of East Falls. Cranky Joe’s and Billy Murphy’s are two of the most authentic local “dive” bars you can find, and one of the best ways to learn about our scrappy, passionate neighborhood.  Come out for great wings, and hang around to meet some great characters, hear some wild stories.

But for gods sake don’t screw with the jukebox here, yeep!!   🙂

**UPDATE NOVEMBER  18**  It’s that time of year again… Wing Wars on Conrad! The return of a favorite holiday tradition: basically, we eat wings and drink beer all night before Thanksgiving. We’re off the next day, what the hell?

A turkey dinner’s like the best “recovery” food ever, so we’ll be piling on the grease & alcohol with our friends at Billy Murphy’s and Cranky Joe’s.  Join us or just enjoy our live-tweeting train wreck — but first, our popular re-run from last year:

On one hand, the big, juicy, saucy-crisp Murphy’s wings which are pretty near perfect, right? But then Cranky Joe’s are almost caramelized with the skin all bubbly, slightly smaller so you can fit a whole one in your mouth, just strip it in one pass.

Analytics failed us — we tried tallying scorecards but we’re writers, and our efforts to reduce concepts like “texture” and “flavor” to a number from one to five proved impossible.

Beer only seemed to complicate the situation. Before long, we’d lost faith in our methods and furthermore, could not even agree on which wing we preferred between us.

The truth is, BOTH joints make a mean plate of wings, and stick true to the traditional Buffalo method:  deep-fried-but-not-breaded hot wings with a spicy vinegar-butter based sauce.

For wing lovers, there’s no comparison between Buffalo wings and those generic “hot wings” you see on pub menus everywhere.

East Falls is lucky to have not one but two  great places where you can get an authentic plate of wings, right down to the celery and blue cheese dressing (extra-chunky at Cranky’s, btw).

So as our mighty Wing War fizzled, our Thanksgiving Eve heated up —  after we sat down at Cranky Joe’s following 90 minutes of wings & Guinness at Murphy’s.

We’d totally enjoyed Billy Murphy’s, how could you not? It’s a snug, welcoming spot, dripping with local charm. Folks were chatting, music levels were perfect. John behind the bar wasn’t expecting too busy of a night, maybe later when people started coming back from earlier events in the city.

His friends with downtown bars were bracing for masses of college kids, who don’t tend to party in East Falls so much anymore. Used to be Thanksgiving Eve was like a reunion night when everyone’s home for the holiday, but lately it’s been more about going out.

So around 8:30, we drained our pints and took one last photo, before heading into Cranky Joe’s to snap a comparison shot as soon as we’re settled.  And the first thing we said to each other was, “Wow… this feels like Thanksgiving Eve!”

Bartender Dan showed us the specials menu right away, pointing out wings were a dollar off because of “Some thing.”  Hey, that’s us!

We gleefully let him know who we were and he gave us exactly the response you’d expect for two unknown writers showing up to take pictures of an appetizer. But still:  a warm reception, for everyone who came in that night. Smiles everywhere. 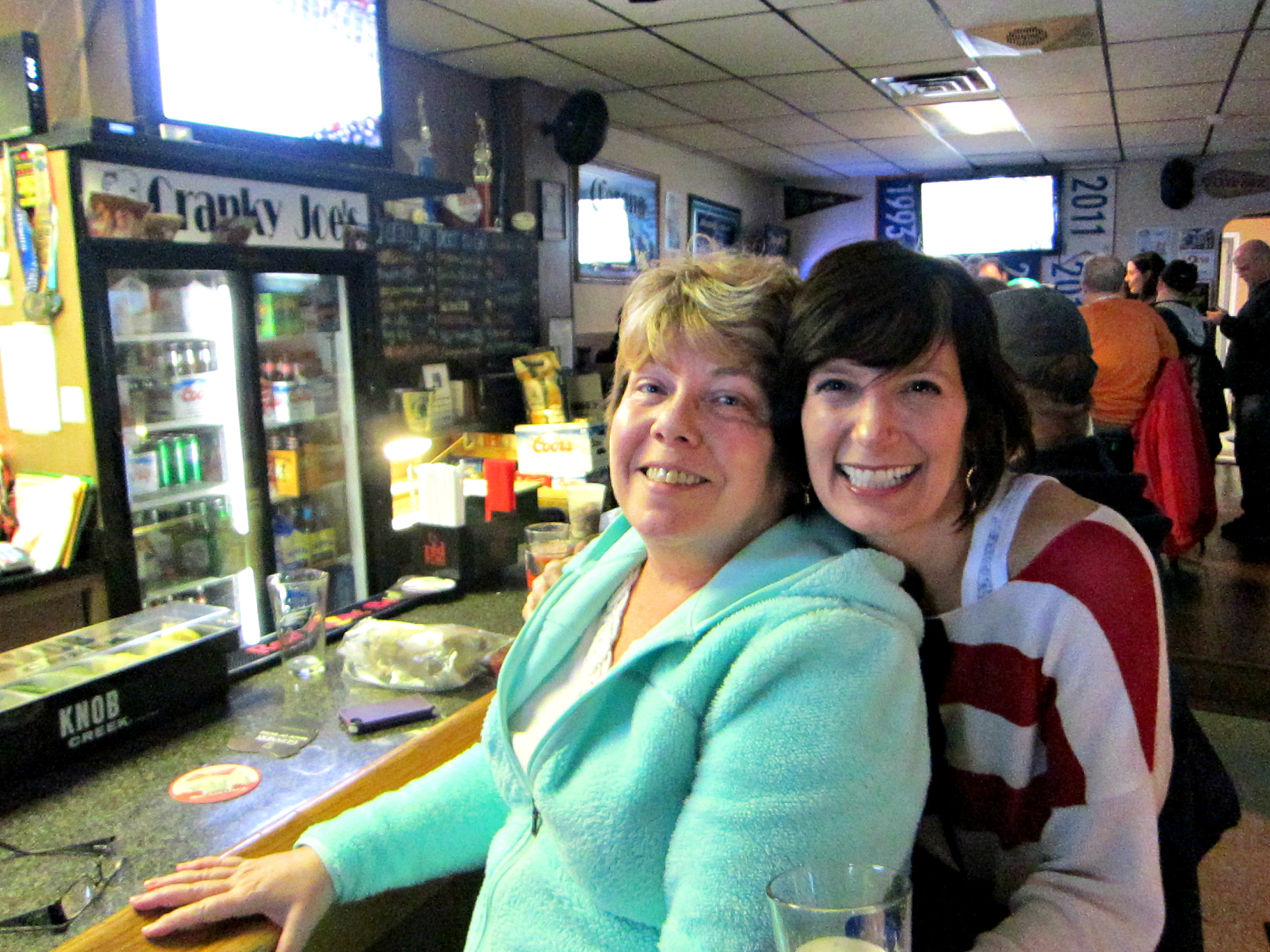 Liz Mcfarlane showed me around, her husband told Steve she’s a natural greeter as we popped down the bar saying hello and hearing all about the wings here. Patrons were enthusiastic supporters: Cranky Joe’s has the sauce perfected! But then they’re not afraid to experiment with flavors. 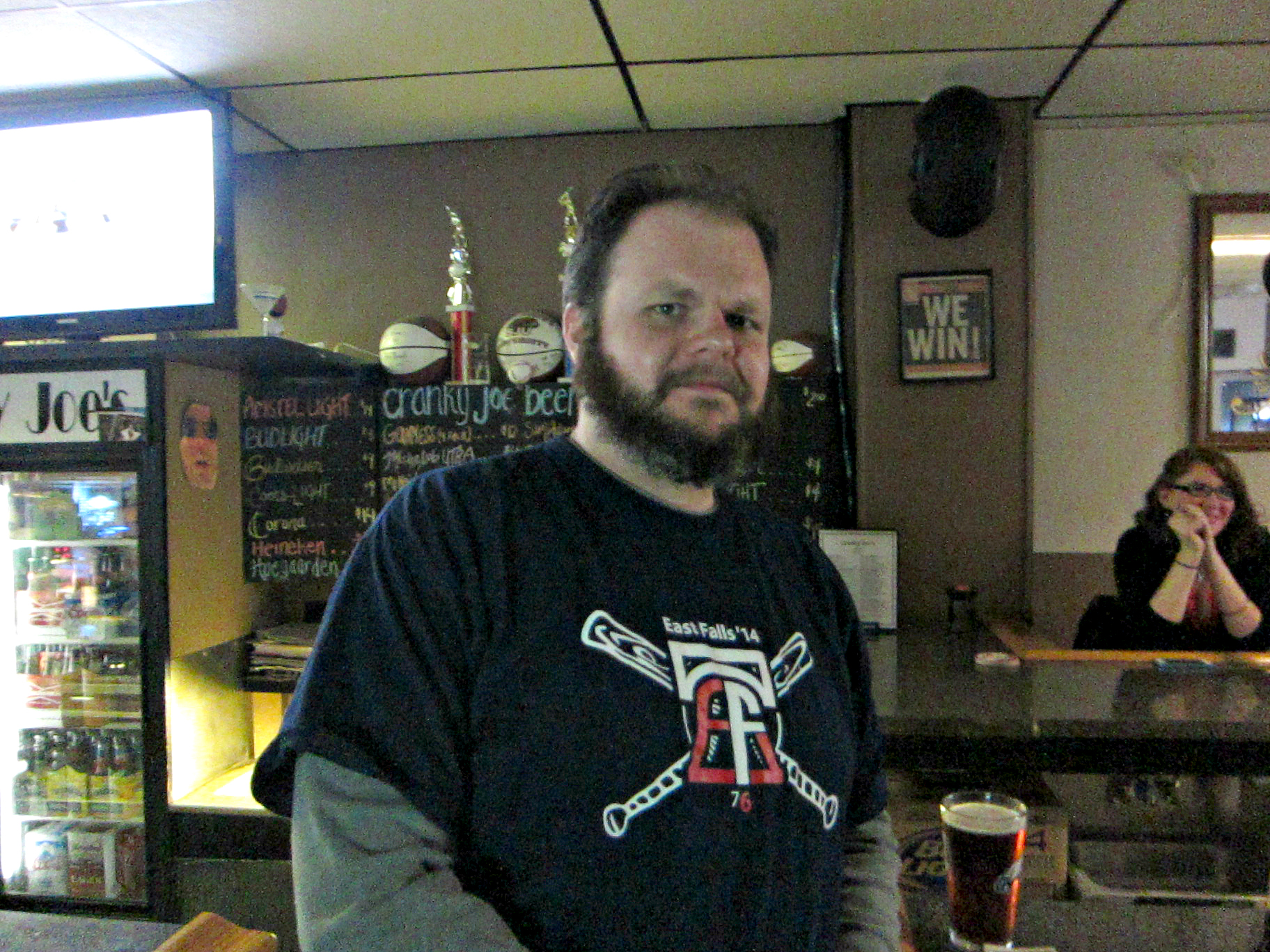 Flash Gordon is the maestro behind the wing sauce here (pretty sure his real name is Joe but everyone called him “Flash”).

Wednesday night, we tried both their Buffalo medium and then on a whim tried a spicy-sweet BBQ that was delicious but irrelevant to the comparisons we’d already abandoned, so whatever. By this point in the evening, food was the last thing on our minds.

So the music started and Barbara & her niece Jen started bopping around — not so much dancing, really… but standing and moving to the music while drinking beer. Bar patrons kinda jammed in their seats. Some clapping, some hand gestures. And then the Springsteen started, which got a bunch of us singing.

Vince beside us pointed out the app on his smartphone he uses to control the jukebox remotely. “Sometimes I log in from the shore and play a whole Doors album just to piss off Tomates cause he’s too cheap to override me!”

Later that evening, we would encounter many people who bemoaned Vince’s hold over Cranky Joe’s jukebox.  “It’s like six bucks to get your song to play,” Jen Lally shook her head, “He’s such an a–hole.”  Then she raised the shot he just bought her — bought us all, actually — and we kinda toasted Vince’s a–hole-ness right there in front of him, to his obvious delight. 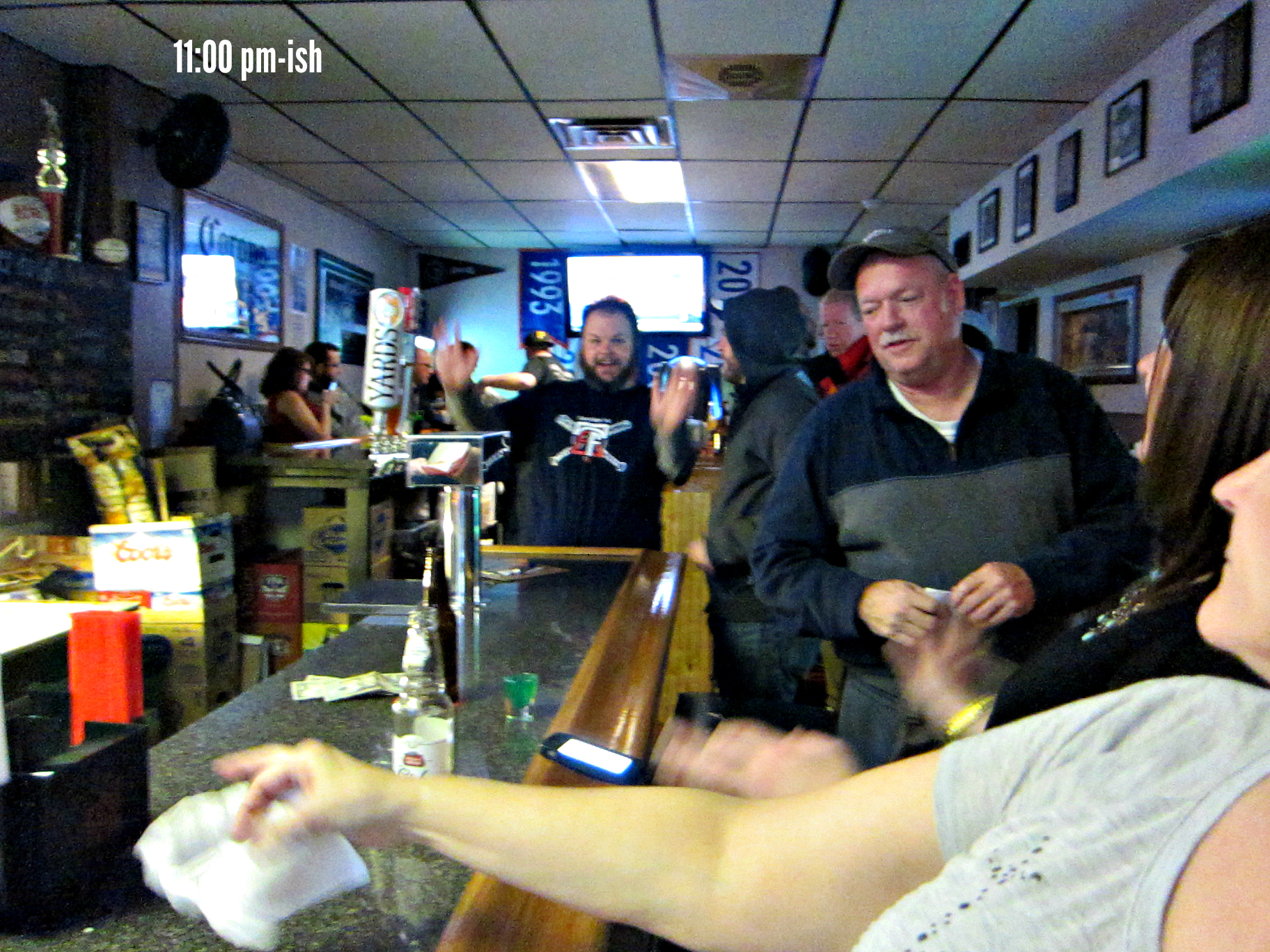 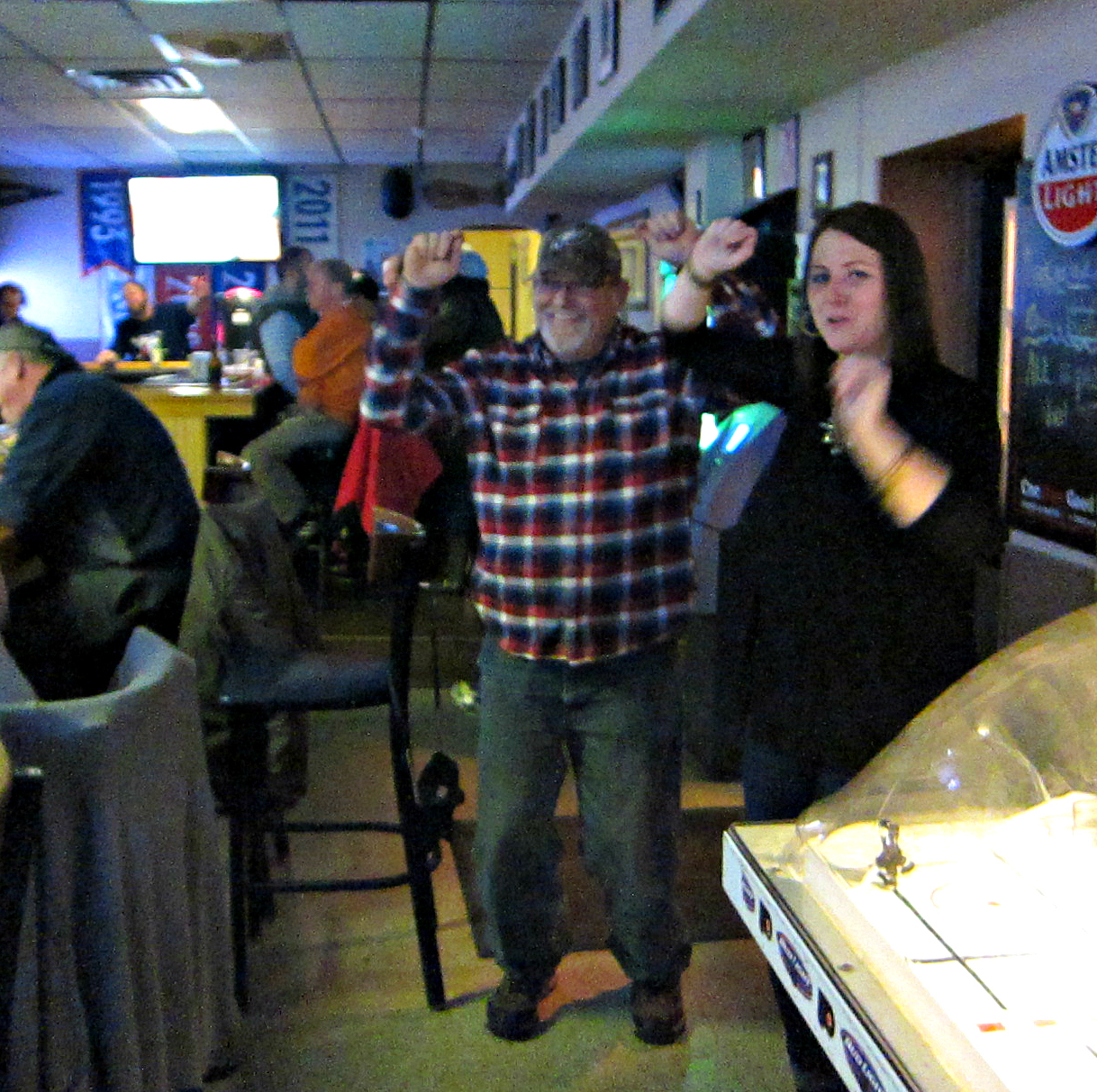 The shots he was handing out, by the way, were “Neon Blue Balls,” which he apparently selected just for the occasion off his favorite bartending app:  vodka, spiced rum, Midori, Blue Curacao with some sour mix and OJ. Like a shot of tangy corn syrup burning down your throat.

The third time shots went around, Barbara was literally hollering, “NO, VINCE!! NO!!!!” which we took as our cue to leave while we were still standing.

Plan was to shuffle back to Murphy’s for one final comparison pic but somehow we failed to remember this until we’d slogged halfway home. D’oh!

For all we know, Murphy’s was rocking later that night, and had its own party going as well. Our Thanksgiving Eve, however, was all about gettin’ Cranky.

Biggest take-away from this Wing Wars endeavor is that we’ve got to get out more in East Falls! 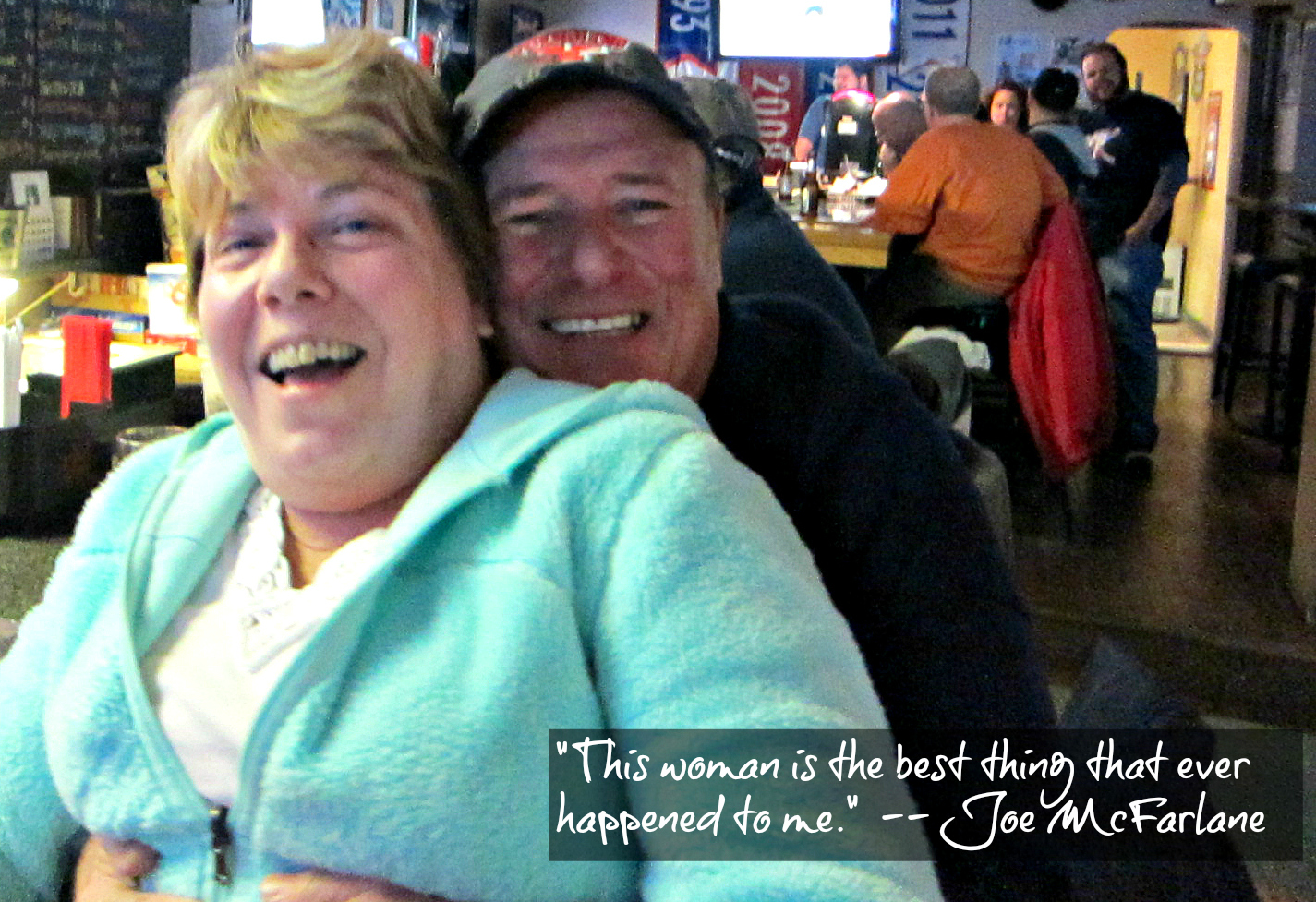 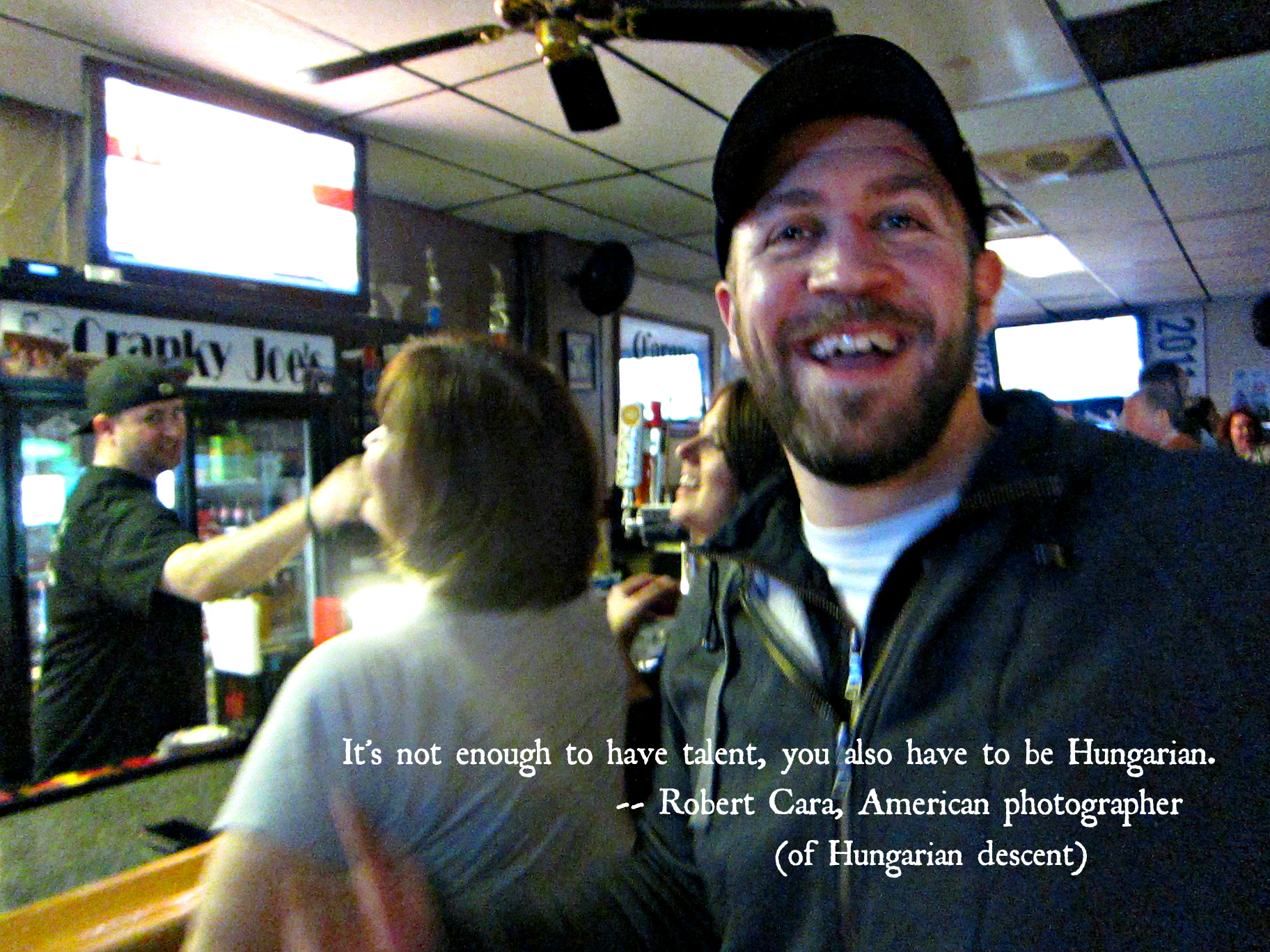 Thanks again, to everyone who bought us a round and shared their enthusiasm and endured our cameras and questions. Happy Holidays, hope to see you around!

RESCUE ME: Can You Bisou?

This shepherd mix was dubbed “Kissy Face” by the intake volunteer who fell for her super sweet disposition. Fostered in the Falls, she’s now seeking a forever home for all the love she has to [more…]