NJ/NYC entrepreneur Steve Carvelli’s the first to admit he had his hands full when he opened not one but two new enterprises on Conrad Street this year. His first, Street & Curb, initially aimed to sell fashion & skateboard decks, then turned to fine art, then was possibly about to become a real estate office (?!) when local artist Tatiana Hassan stepped in with her “diva fairy” jewelry, and the idea of a commercial space where her talented friends can create and show their work, and also help support each other’s success. 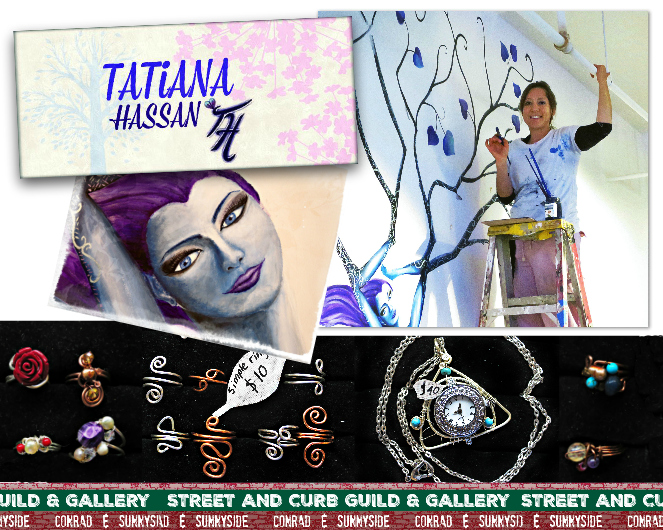 Tatiana creates fantastical jewelry, lighting, and art, and she’s using her skills to design a contemporary shop-slash-gallery, not unlike Center City’s Show of Hands and Spirit of the Artist, but with our neighborhood’s own quirky, lively spin. “We have so many artists here in East Falls, we all should be selling more!” she laughs (while her eyes flash “Seriously. Let’s do this.” ). 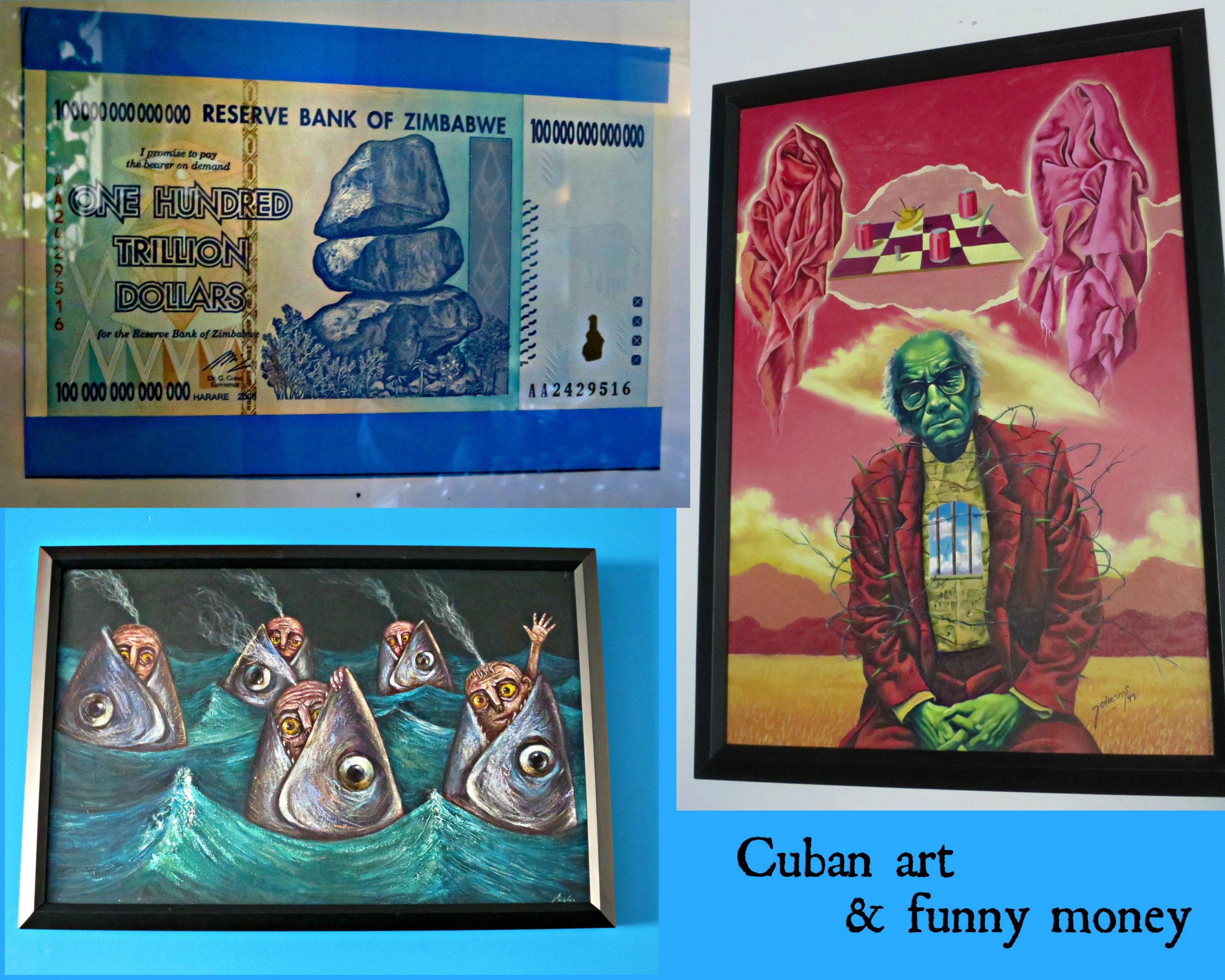 Her idea is not just a store but a hang-out space:  Street and Curb’s long industrial tables provide nice flat work surfaces, with high ceilings for air-drying and big windows that Tatiana’s supplementing with full-spectrum lighting “for true colors, positive energy and hopefully more plants!”  She’s moving in couches, antiques, and even incorporating art from Steve Carvelli’s own collection in the mix:  “Not everything here will be for sale, but it will all be fabulous!”  (was that a wink?)

She’d like to offer complimentary tea & coffee, and keep some evening hours when people are out & about. She’s planning events, workshops — even performances! — and calling in her friends from the world of music, art, and fashion to help curate a cool, eclectic inventory of gifts and eye candy. If anyone can nurture art and commerce on Conrad, this spitfire from Colombia can do it. 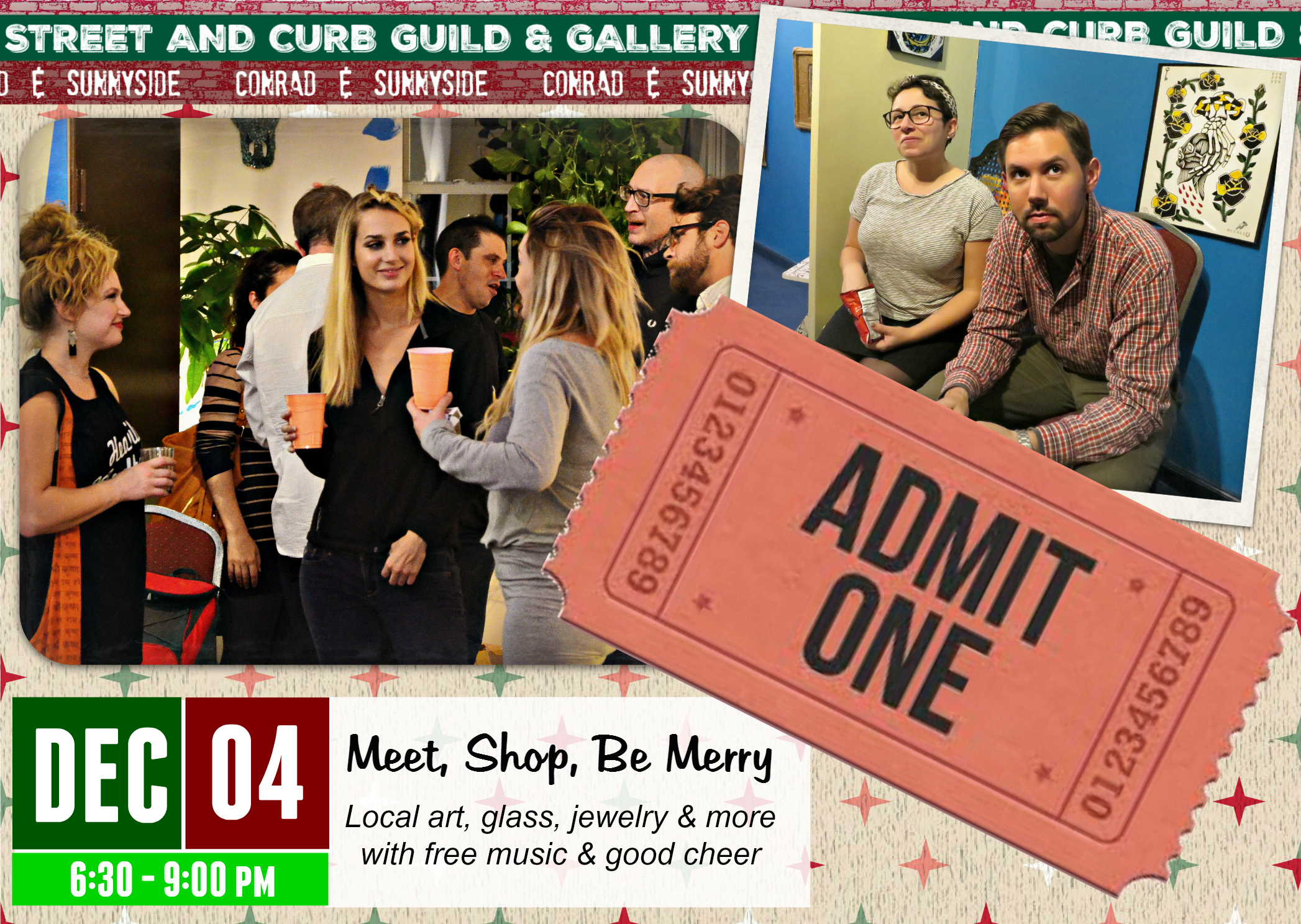 This First Friday — December 4th — come see “Phase One” of Tatiana’s re-imagining of Street and Curb Gallery.  She’s spent the past month creating a dramatic “Diva Fairy” mural across an entire wall. The striking blue & purple tree-woman figure is based on recurring images from Tatiana’s dreams this Summer of “strong, powerful yet beautiful feminine entities” that have inspired a new direction in her jewelry design. 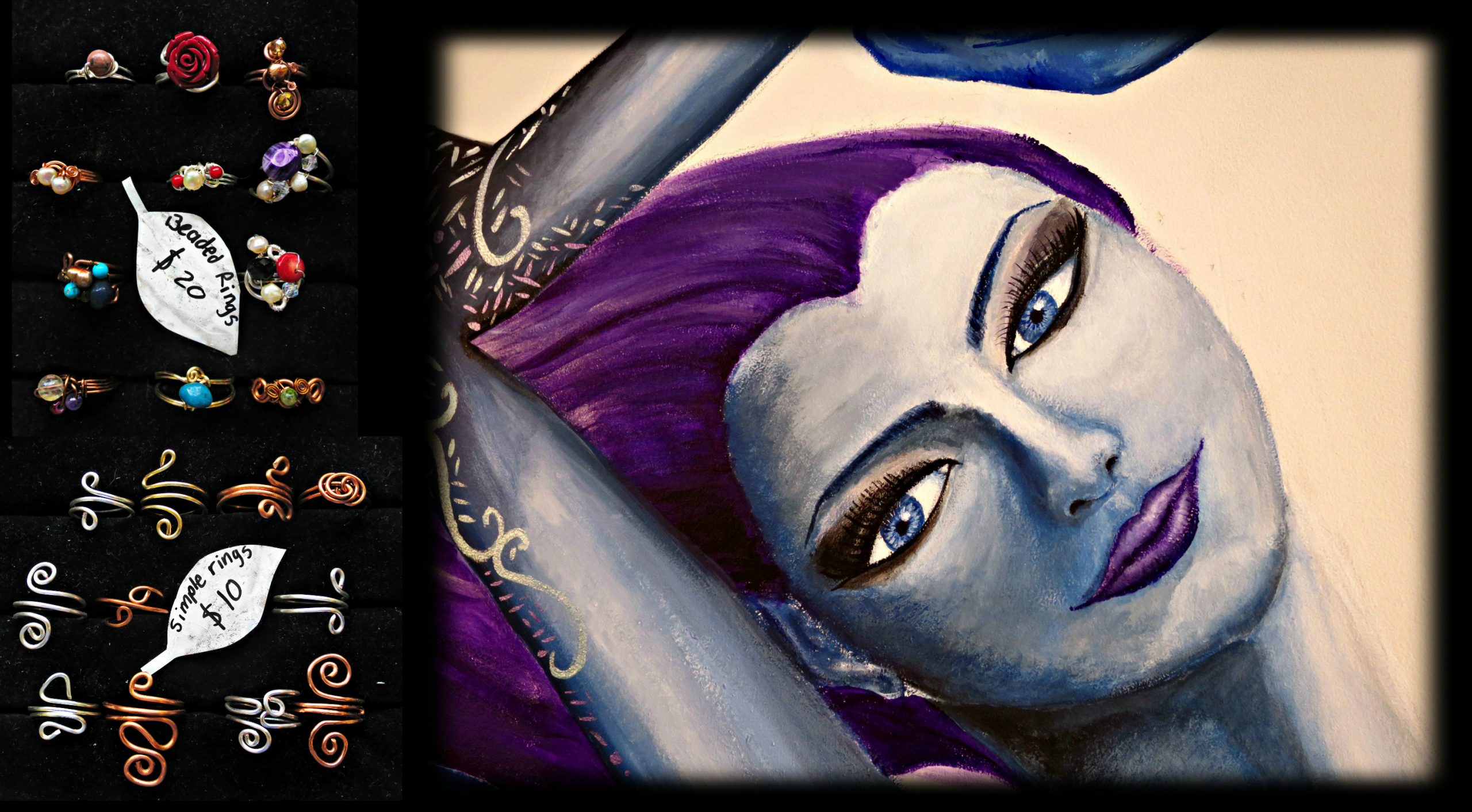 Her mural is also a giant metal sculpture, twinkling with lights and sparkling pendants, bracelets, earrings… all for sale or to just try on while enjoying free food, adult beverages, and live entertainment.  Tatiana will be on hand to show you around her collection, as well as all the others who’ll be showing here this Holiday season. 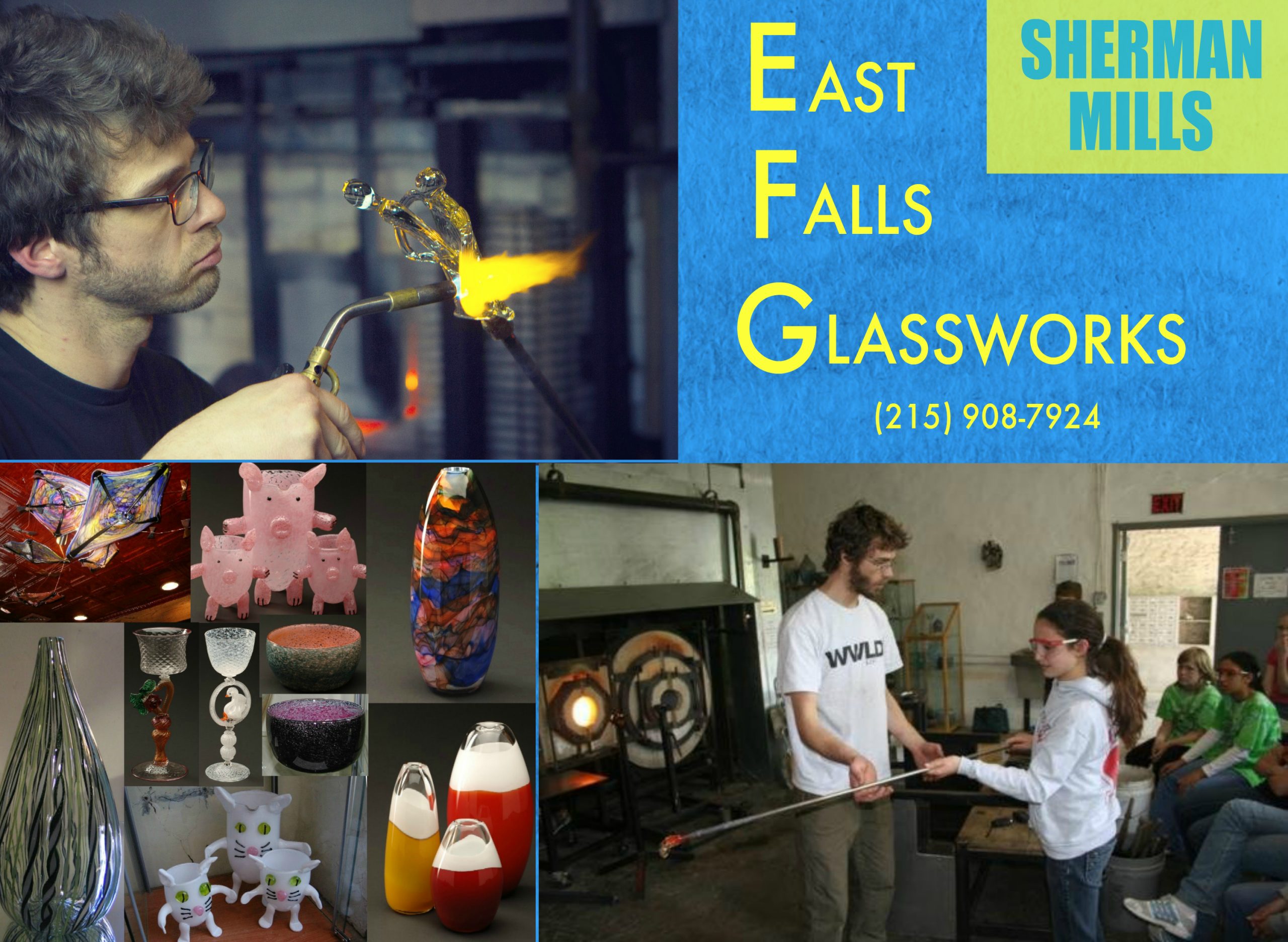 East Falls Glass Works is a place to learn about a wide variety of glass-working techniques, including blowing, casting, and solid working.  Classes for all levels, plus parties and studio rentals, as well. Their talented staff & students create & sell beautiful things in their Sherman Mills gift shop, and now at Street and Curb. Active Facebook page with cool pics & demos! 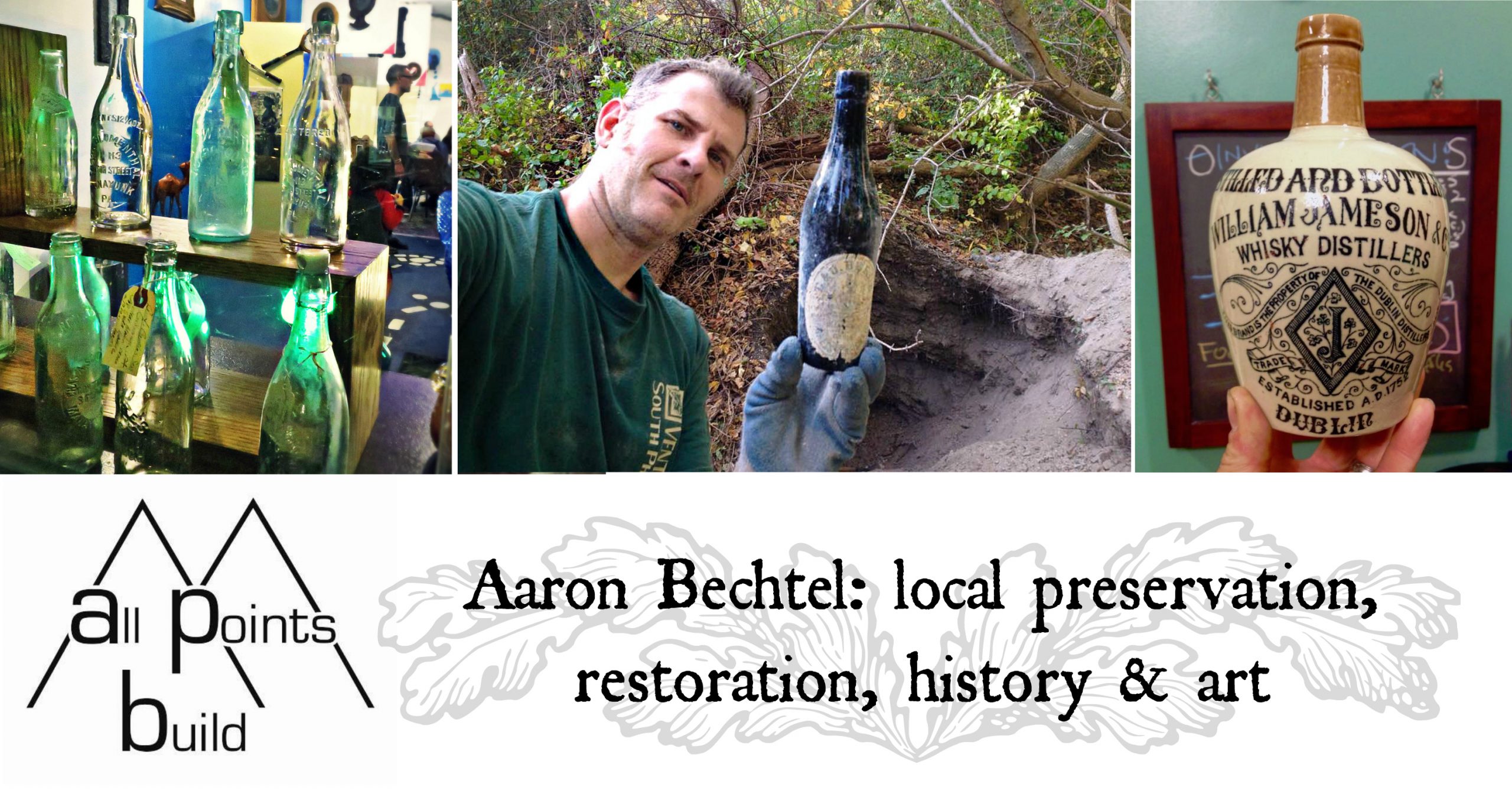 Aaron Bechtel was born in Allentown, PA in 1972, but moved to northern NJ by age 1 and remained there until age 22.  Bechtel works in numerous media including analog / antiquarian photography and printmaking, but deals primarily with assembled constructions and found materials.  He completed a BFA at the Maryland Institute College of Art in Baltimore, Maryland in 2006 graduating with minors in art history and photography.  Bechtel is also the owner / operator of All Points Build; a furniture / fabrication / restoration company located in Germantown, in the NW region of Philadelphia, PA.  He lives with his wife and two daughters in the East Falls section of the city.

Each figure starts with a single piece of wire. The wire is cut, shaped and fastened to itself. Then repeated again and again. This is the process and it goes through miles of wire and time before it is finished. The result is a condensed, solid and heavy sculpture.

The ultimate goal is to make something organic from an industrial material. The figures are representations of distorted human and animal figures. They are evolving armatures.

Sculpture has been my main focus for the last 16 years since a diagnosis of Multiple Sclerosis. Representing distorted limbs, pronounced spines and the ever-present plague doctor are running themes throughout my work. I am exploring iconic creatures representing strength and defiance. Wire is an untapped medium that allows for developing new techniques. The fact that it mimics our nervous system, makes it a natural choice of material for my work.

I have been painting, sculpting, showing and curating in Philadelphia for close to twenty years. I’ve studied fine arts at both the School of the Visual Arts (NYC) and the University of the Arts (Philadelphia).           — Stephanie Gartanutti

Award-winning tattoo artist David McCall of Frequency Tattoo on Ridge Avenue has been perfecting his brand of tattooing for the last 12 years, now featured in original paintings for sale at Street and Curb. With 2 decades experience as a visual artist, David blends elements of conceptual art with traditional tattooing imagery to achieve his unique style. A Philadelphia resident, David is a frequent guest at Lower Manhattan’s Fine Line Tattoo NYC and Seven Stars Tattoo in Phoenixville, PA. David is a loving husband and father of cats. 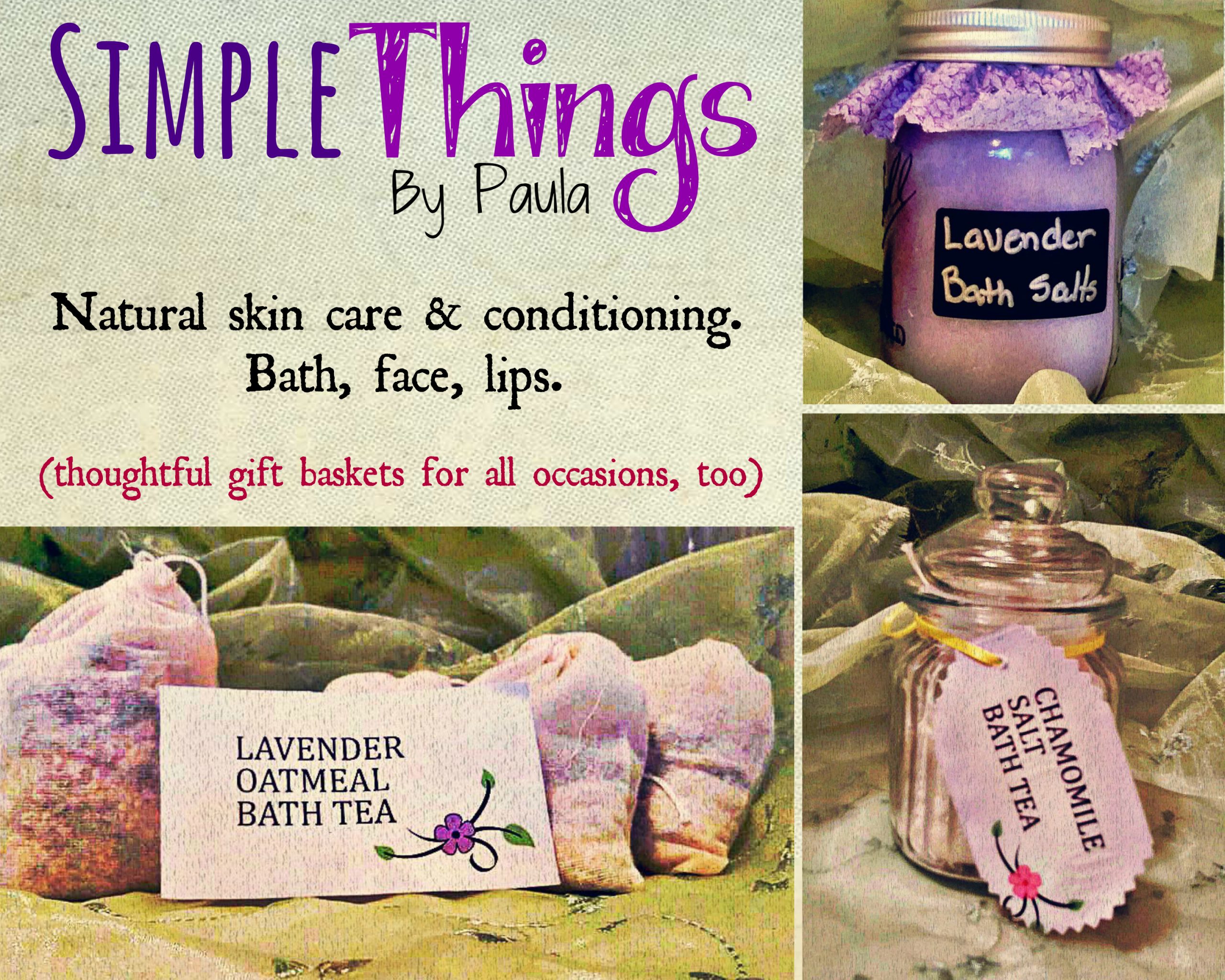 Paula Dougherty is a Licensed Massage Therapist and lifelong bath-a-holic now offering “Simple Things:” natural soaps and skin conditioners that she mixes in her own kitchen. Salt and milk are her favorite bases, into which she blends lavender, chamomile, oats — Paula’s unique recipes relax and moisturize in hot water, then rinse away clean to leave skin glowing-soft with just an herbal hint of scent.  100% natural & hypo-allergenic. Gift baskets of all sizes available.

Born & raised in East Falls, Paula spent some time in Tennessee before circling back around to this area — Alden Park, specifically, where she now lives with her crafting space and travelling massage table.  Contact Paula for therapeutic & relaxation massage, including sports, Swedish, MFR, PNF, and triggerpoint release. Follow Paula’s daily Facebook inspirations plus tips & recipes for happier, healthier living.

We are proud to feature some of Marilynn Shaffer’s winter hats. Her hats have been in 5 local stores, and will be down in Reading Terminal at Amazulu and at Renne’s in Chestnut Hill  this holiday season. Her hats are stylish, warm, can pull down over your ears, and your neck. She has some hats from her Rennaissance Collection and some from her Downton Abbey Collection at Street and Curb for our First Friday Party.

Born in Buenos Aires, Argentina, Sergio Cohen Salama taught himself to play guitar and started as a rock musician at the age of 15 forming a power-trio called Muronegro. He then got into the exploration of diverse musical styles with SCAT, a four-piece drummer-less group.

After that, he joined LA Little Band, a funk instrumental number that played both originals and covers. Street performances were always a constant among all of his bands and that’s why he ended studying Acting for Open Spaces in Buenos Aires Metropolitan School of Dramatic Arts. With two other street musicians, he formed Trio Ternura, originally a street-exclusive band that ended up playing bars and venues as well as traveling through South America.

With the knowledge he acquired at theatre school he wrote and co-produced Santa Maria, a rock opera with actors, dancers, projections and live music by Muronegro that was showcased in 2013 and 2014 in Buenos Aires. During his visits to the US he has performed alone in Philadelphia’s streets, in coffee shops such as Higher Grounds (Northern Liberties), Wired Beanz (Germantown) and Crossroads (Roxborough), and as a side-musician for singers Kola Nutt and Lena Lewis in early 2015. This time he’s bringing a new solo act that tends towards his vision of the future and renewal of music, using a laptop computer as his only accompaniment.