“Mayor Kenney would like you to think that homelessness is a hard problem to solve, and that he’s doing just the best he can. We are here to air some of his dirty laundry,” said event organizers.

The evening started much like it often does down at City Hall, with multiple groups sharing food with the unhoused residents of our city. On one side of the Broad Street split in front of City Hall, a Christian group can be heard proselytizing to folks in need of food before finally providing the meal they were so desperate for. On the other side of Broad Street, Food Not Bombs got right to the heart of the matter without demanding people sit through some sermon to earn the food they need to live.

Instead of proselytizing to the people, activists let folks say what they needed to say, to speak out about the conditions they faced on the street and in the shelter system. They got to tell their own story. They got to be heard rather than blamed and scolded for the conditions which create and perpetuate homelessness.

Eventually, the Christian group packed up their things and moved on, and Act Up, Philly, PA Union of the Homeless, and the Poor People’s Campaign settled in and got down to business. At the same time, Food Not Bombs continued to serve food and coffee to those present for the teach-in and anyone else who happened by well into the night.

This tactic had taken hold on a national level but locally with little national organizing behind it since last summer when the pandemic pushed a lot of activist organizations focused on poor and unhoused folks into more and more radical tactics.

In Philadelphia, there are estimated to be more than 6,000 unhoused individuals and families, with tens of thousands estimated to be in a state of housing insecurity. On the other end of these numbers is a shortage of shelter beds, treatment facilities, and nearly 130,000 unused or abandoned houses that could be rehabbed to provide housing for those who need it.

“Shit has to change, Mayor Kenney and by extension Philadelphia has been failing it’s most vulnerable residents, and we’re going into the winter months which are even more deadly for the poor and unhoused.” Said Jamaal Henderson of ACT UP Philly.

Around 8 pm, the first teach-in got underway, laying out what it takes to organize protests and best practices for organizing in a way that considers the needs of those most affected by the issues being worked on and centers them.

Organizers spoke on their experiences doing civil disobedience and being arrested in Philadelphia, what to expect when you should risk arrest, when not to and what to do if you are arrested for minimizing your time being held and what you can be charged with.

As if to underline the threat to those living on the streets of Philadelphia, around 8:45 pm, Gregory Thomas, a security guard working in the park for the construction company building the Christmas Village, shot and killed Ryan Groff after some sort of altercation with the security guard. (Thomas went to his Jeep parked nearby and retrieved a handgun before returning and shooting Groff multiple times.)

Dozens of unhoused folks can be found in LOVE park every day, through most of the year, and their situation puts them at higher risk of being shot or meeting some other violent end.

In the meantime, the effects of a tire fire at a junkyard in southwest Philly were beginning to affect people with breathing problems in Center City and other nearby neighborhoods. People could be heard continuously coughing as they passed by or laid down to sleep nearby. By early morning many were vocally complaining about their breathing difficulties, headaches, and stomach issues. (I had to go home early myself, due to similar symptoms)

The realities faced by unhoused folks didn’t deter housing activists, many of whom were currently or formerly unhoused themselves, from pushing forward with the teach-in and occupation.

Housing activists from PA Union of the Homeless and Poor People’s Campaign led the next round of discussions focusing on the history of encampments, and housing takeovers, sweeps, and evictions, the power of unhoused folks organizing themselves, and the inherent difficulties of doing so, the tactic used by state and corporate power to break up these organizing efforts.

At around 10 pm, those who were going home for the night while those who planned on staying started settling in, laying down their makeshift bedding for the night, a mixture cardboard, blankets, and sleeping bags tucked into the nooks and crannies of City Hall. Others still settled into unloading their burdens and connecting with others. Everyone comes from their own unique set of experiences and traumas, with their outcomes. All of which led them to Dilworth Plaza on a cool night in November to fight for people who have been beaten down by circumstances, bad public policy, and a society that has long treated them like trash, leaving them abandoned.

“As the cold months approach, we must unite our voices to reject do-gooderism, to instead demand power not pity, change not charity. ACT UP Philly will coordinate with the Winter Offensive to build people power and center the needs and safety of those suffering the most from the failures of Mayor Kenney and the City of Philadelphia,” said Henderson. 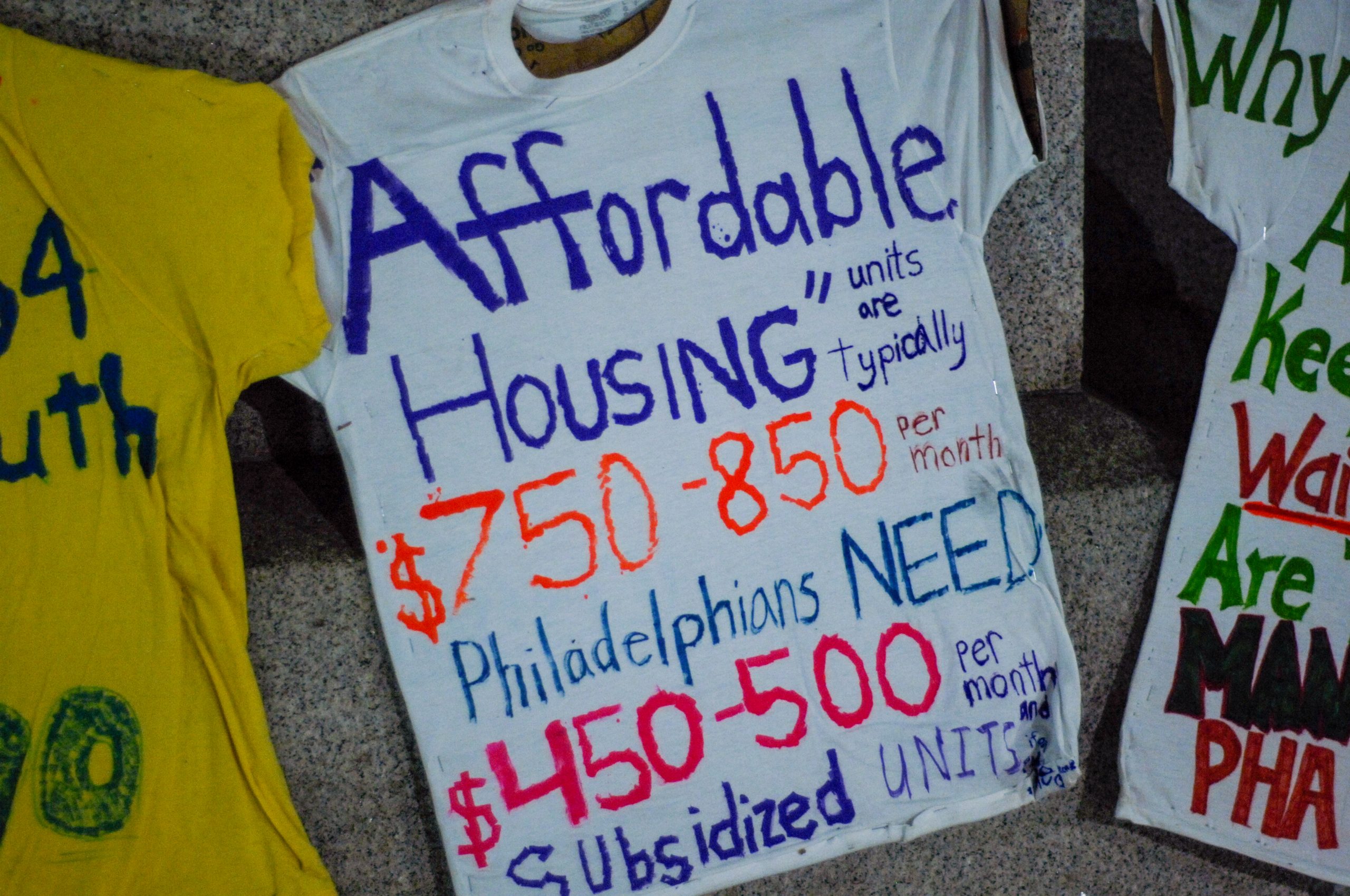 JUMP IN!  If you are interested in getting involved in the fight to end homelessness, participate in the ‘Winter Offensive,’ contact ACT UP Philadelphia, PA Union of the Homeless, or the Poor People’s Campaign through one of the links below.

A movement is currently underway to pressure Philadelphia’s Redevelopment Authority to give the YWCA building back to the people! Read our summary here and please consider adding your name to the petition (CLICK HERE!!), and joining the Facebook group determined to fight for affordable living for long-time neighbors who deserve to age in place.

Thank you for supporting safe, healthy housing for all!