Germantowners join forces to fight for fair use of a critical historic landmark.

TRUE STORY: In 2015, local developer Ken Weinstein and the non-profit organization Mission First proposed a plan to restore the historic YWCA building at 5820-24 Germantown Avenue for low-income senior housing that the community — nay, the city — badly needs. The neighborhood strongly supported this plan.

The Philadelphia Redevelopment Authority, however, turned them down. Wtf? At the time, Councilmember Cindy Bass told Hidden City she felt affordable housing here would be “squandering” a key development opportunity, which did not interest her “at all”. Instead, she said she was working with PRA to get a “better” developer. She wound up choosing KBK, an out-of-state firm with limited experience who has failed to get any semblance of a project off the ground — they’ve had “predevelopment” plans on their website since 2016, though (“COMING SOON” lol).

Meanwhile the building has sat vacant and neglected for six more long years. Every passing season takes its toll on this local landmark left to decay before the community’s eyes. It’s only a matter of time before the YWCA is declared too far gone — restoration will no longer be financially feasible. Someone’ll say the two magic words, “structurally unsound” (“imminent danger” works too), and down it’ll come. Then – wait for it! – up will go Luxury Residential to properly “revitalize” this business corridor to Cindy Bass’s liking, constituents be damned. 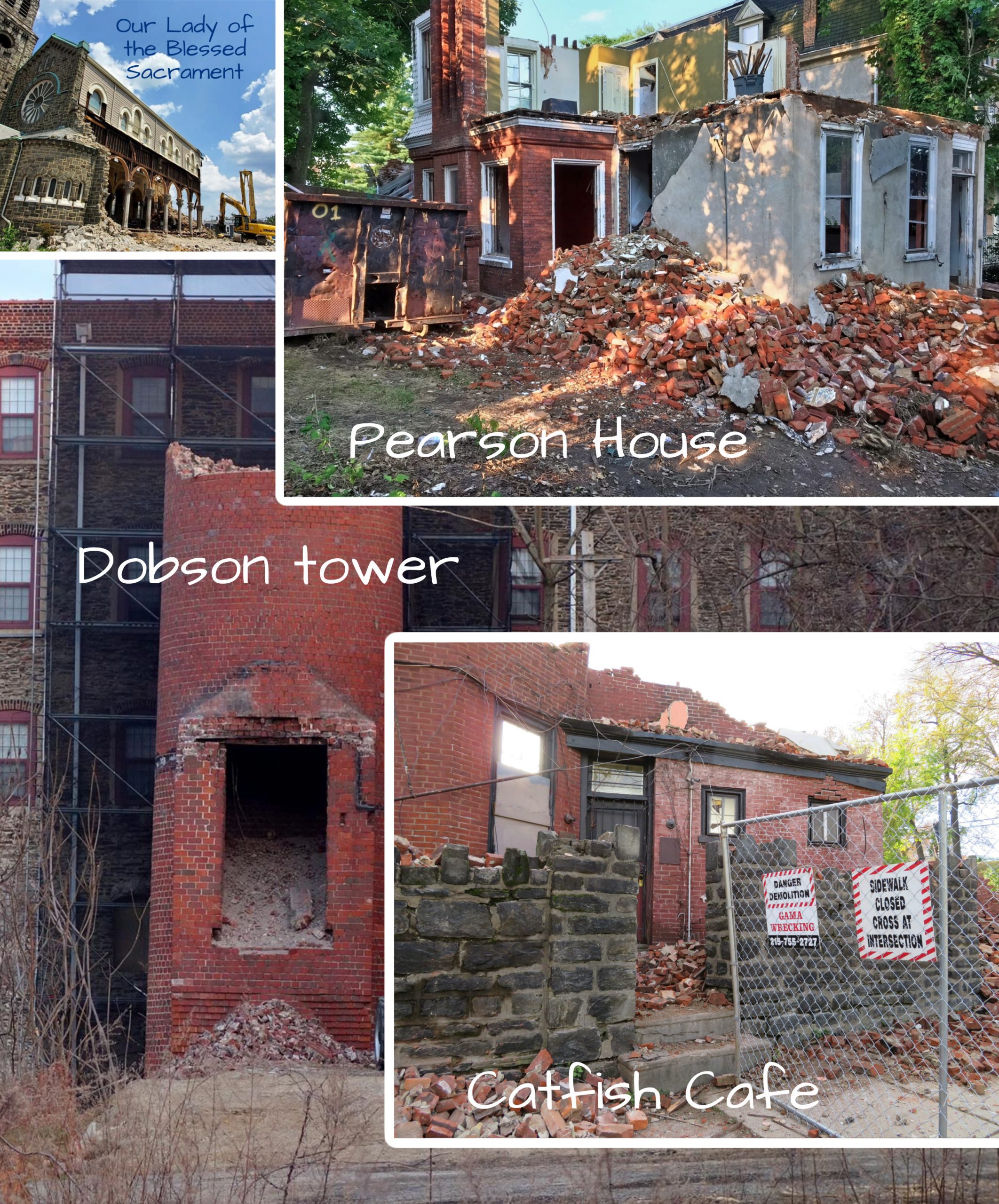 Do we have a crystal ball? No. But how many times do we have to see this same old ploy play out? Whether it’s the Catfish Victorian saloon in East Falls or Fairhill’s beautiful Baroque St. Bonaventure church or the renowned Joseph T. Pearson house in Germantown – in every part of Philadelphia, our leaders look the other way while our World Heritage architecture crumbles into disrepair… then disappears. No historic designation invented yet protects a property when the owner claims financial hardship.

If Cindy had a clue, she’d see Germantown doesn’t want or need her kind of “revitalization” – the people here are plenty vital, thank you. Six years ago, neighbors had a great plan to save a treasured piece of local history while providing an important community resource. The YWCA building is particularly fitting for senior housing because it’s near a commercial corridor, with access to shops, services and public transportation. Even better, it’s also right nextdoor to Center in the Park, which provides classes, activities, events etc for older adults.

In addition to having an ideal location, the project’s head developer — Mission Housing — is a national industry leader who, in a display of genuine competence, went on to build the award-winning $60 million, LEED-certified “New Market West” commercial/office/residential hub that opened this year in West Philly. Imagine what they could’ve done here in Germantown. 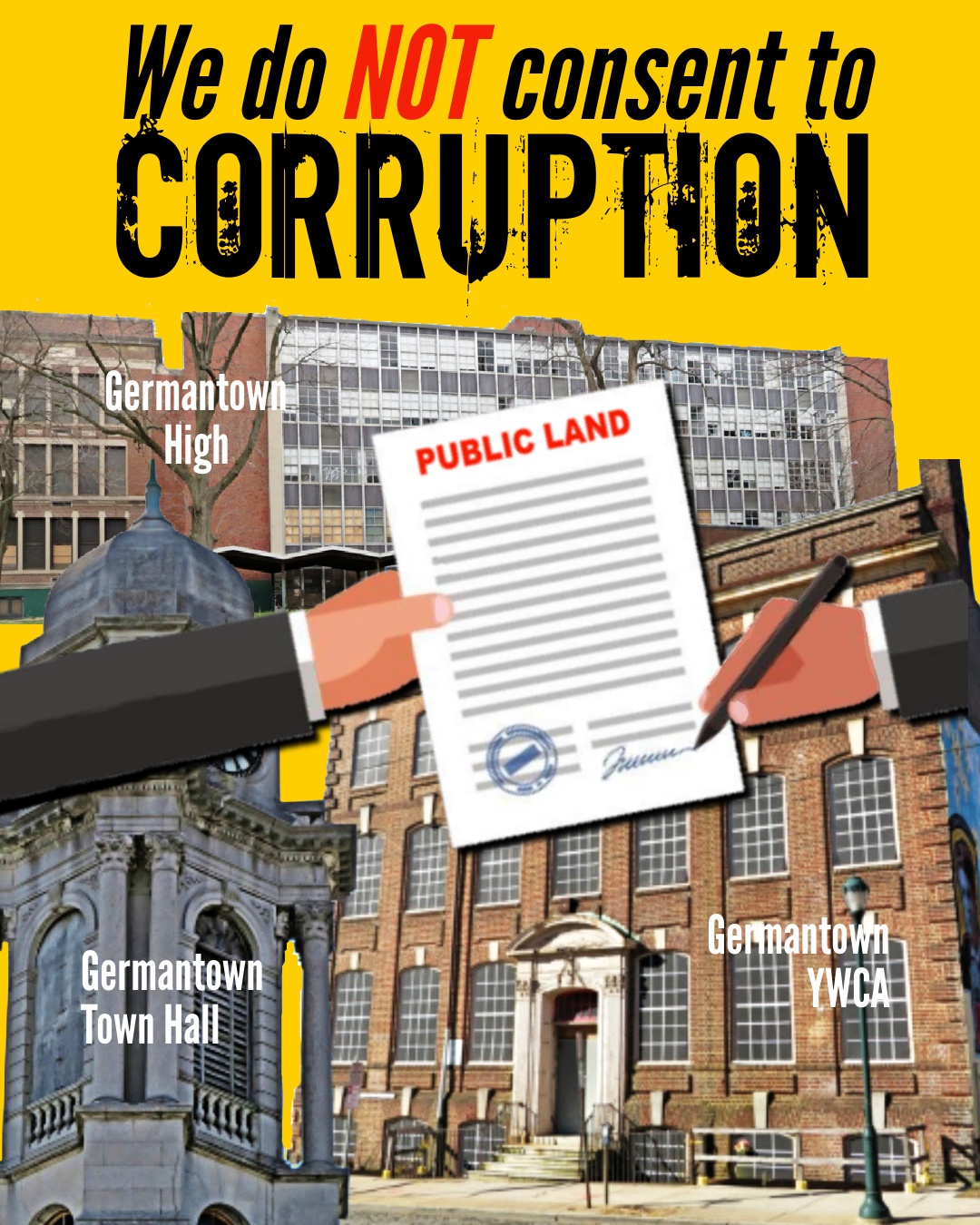 So where are we now? We’ll turn this over to NW Philly neighbor and community activist Yvonne Haskins, one of a handful of local stakeholders who spoke at the Philadelphia Redevelopment Authority’s October board meeting to request the Board withdraw KBK’s development award and put out another RFP out for new bids. “Technically, the PRA does not need Cindy Bass’s approval to remove KBK,” she told us, “but unfortunately out of respect for Councilmanic prerogative, they will not act.” Unless…

Yvonne’s plan is simple: 100 calls/tags/emails to Mayor Kenney per day, every day, for an entire week to kick off a grassroots media blitz including ZOOM meetings, rallies, a petition – whatever it takes to show the PRA that Germantown is committed to saving their YWCA,  and determined to fight for the resources we need and deserve.

Public lands belong to the people! Join the campaign to reclaim what’s ours and repurpose it for everyone’s benefit. Feel free to cut and paste Yvonne’s passionate plea here, or fashion your own message for Kenney (don’t forget to cc. the PRA and Cindy Bass). Every message helps, thank you for fighting the good fight!

Your immediate attention is desperately needed to save a treasured Germantown landmark and provide much-needed senior housing.

Philadelphia’s current affordable housing crisis is no doubt one of your top concerns as mayor.  Yet, month after month, the PRA enables District Council members to profiteer from public property. Councilmembers aren’t developers, why are they in charge of selling off the City’s lands? Where is the transparency, the accountability?

Councilmanic prerogative should not override the will of the people. In Germantown, Cindy Bass blocked community efforts to restore the YWCA building for low-income seniors. Six years ago, she hand-picked an inexperienced, Ohio-based developer who has done nothing in all this time, while the building has languished.

With your leadership and power, you can demand that the PRA act now to withdraw the YWCA building’s development rights and issue new Requests For Proposals more in keeping with what the community desires: affordable housing and other uses for economic development (ie training, commercial, office).

The community is asking you to please exercise your power at once to implore the PRA to remove Cindy’s developer and start over again with more neighborhood input. We need you to do the right thing! Thank you.  Signed (Name, address, email) 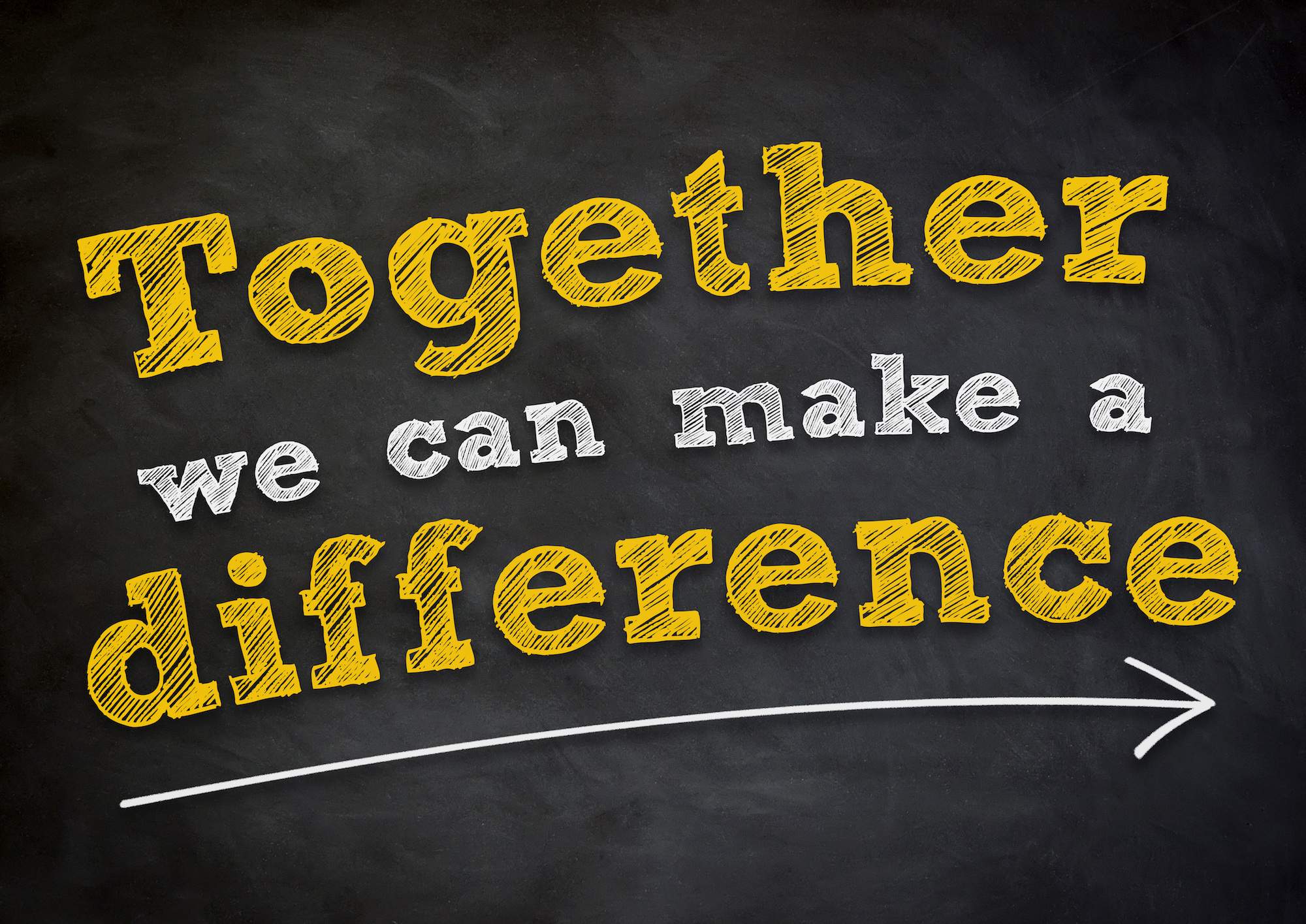 Thank you to every neighbor who speaks up for preserving the YWCA building as the community intends!

**UPDATE** Please sign the petition! CLICK HERE to ask the PRA issue a new RFP by the end of 2021. Then make sure you join the Restoration movement’s Facebook page to keep apprised of all meaningful developments.

Please follow Yvonne Haskins’ posts on the public Facebook group Living in Germantown, All Together and also consider joining the Friends for the Restoration of Germantown YWCA‘s facebook page, too. Finally — there’s a big community meeting Tuesday December 7th at 7pm. Zoom link and instructions on the event page, and also this will be an in-person meeting, as well at the First Presbyterian Church in Germantown. 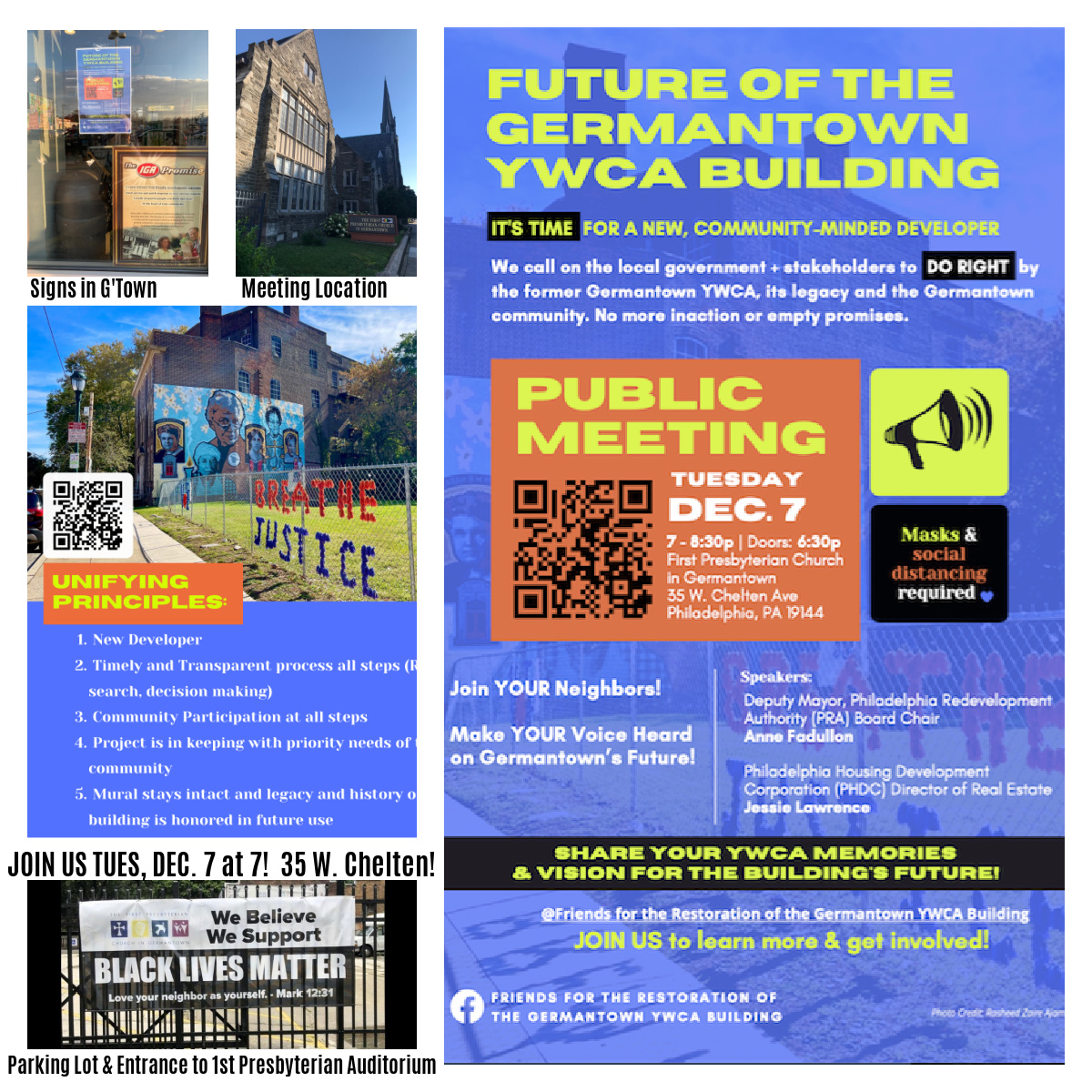 Rich Better Have My Money

Corporate America must pay up for the People [more…]