Last year, neighbors packed Janes Memorial Church to share memories of, and hopes for, Germantown High School during a series of “community visioning meetings” meant to provide input to the developer of the building. Sadly, many of those hopes went unfulfilled when the project moved forward earlier this year without a community agreement. One of the speakers at those meetings, Oscar Beisert, has seen many historic buildings lost to development but that didn’t make the outcome for GHS less bothersome to him.

As a preservationist, Beisert’s well known for nominating — and winning — historic designation for properties all over Philadelphia, protecting them from the wrecking ball. But for every win there are many losses, especially when “only about 2% of the built environment in Germantown is protected from development.” It’s a similar situation across Philadelphia – “a world heritage city” Beisert adds with a heavy dose of irony in his voice. He’s long worried about the remaining 98% of historical buildings, many of them in Germantown, but the recent rebound in development activity after the COVID shutdown has heightened his concerns.

“We’ve lost about 10-15% of the district since Germantown Avenue was designated as a National Historic Landmark in 1965, even before the National Register of Historic Places existed. But the built environment around the Avenue still hasn’t been designated historic despite an embarrassment of riches in terms of historical structures. And we continue to lose buildings, several a year. What’s really sad is that if you lose enough buildings, then you would ultimately lose the National Historic Landmark status.” 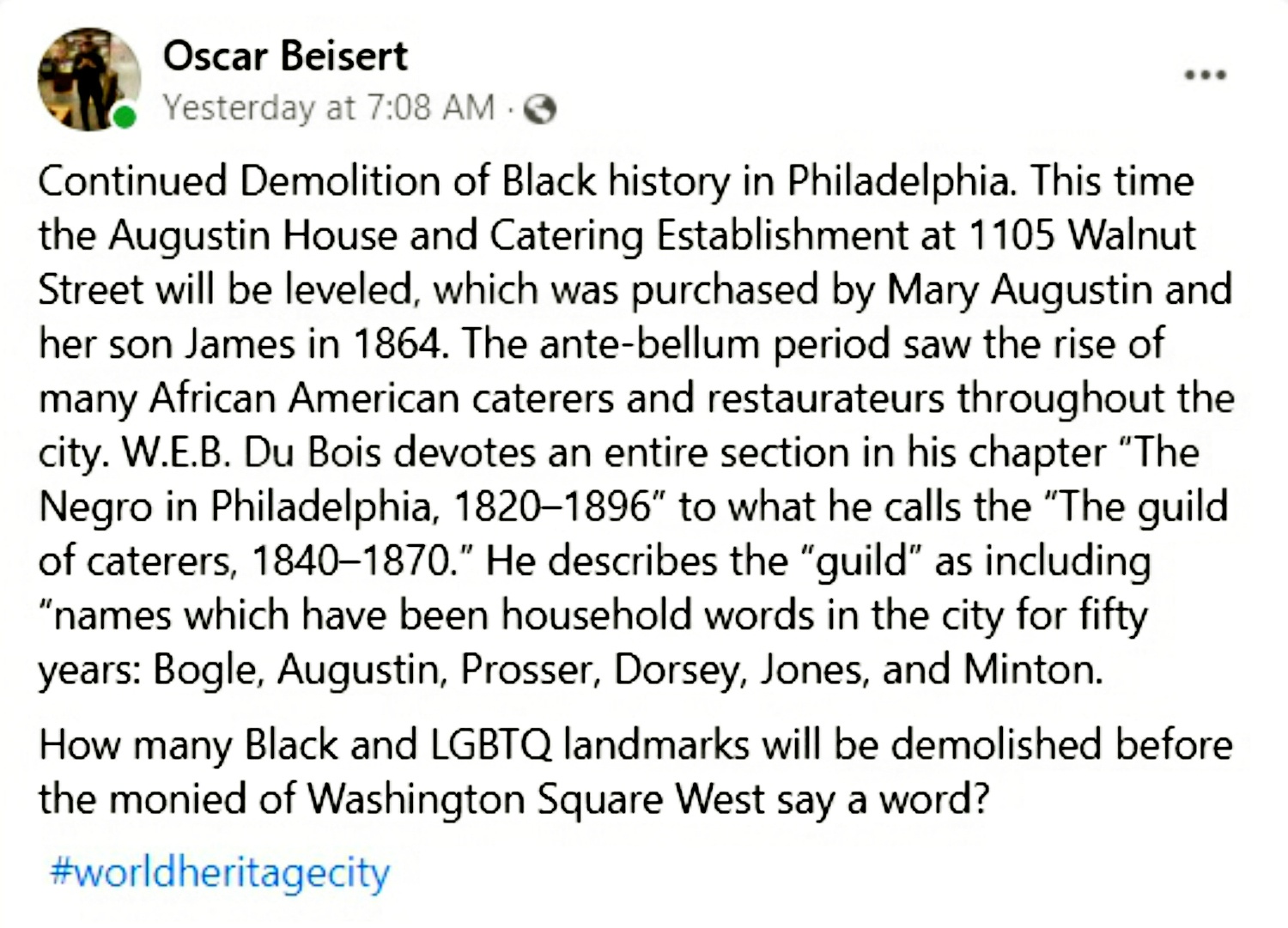 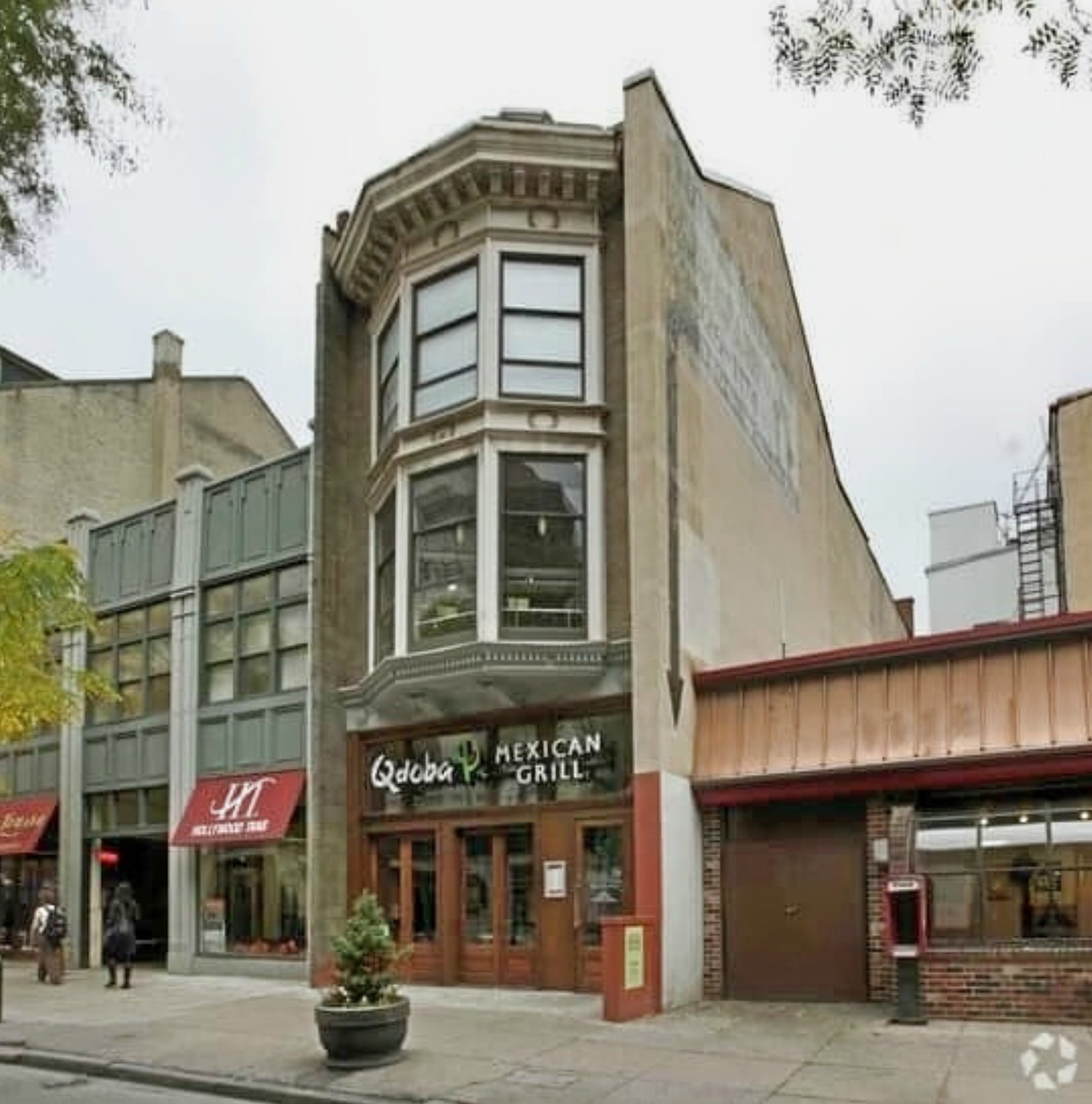 What’s to be done? He wishes Germantown had an organization dedicated to preservation, like the Chestnut Hill Conservancy. But without Chestnut Hill’s financial resources, it’s unlikely Germantown could create a similar organization. The next best option is one Beisert’s advocated for as a member of Mayor’s Kenney’s Historic Preservation Task Force – “tiered designation.”

Much of the difficulty for developers (and homeowners) is the requirement that historical properties be maintained to a “white glove” standard, meaning that only “historically appropriate” materials, such as wood shingles or certain types of window materials, can be used, making upkeep expensive. It’s sometimes easier to tear down (or sell, in the case of homeowners) a property rather than maintain such a high standard.

A tiered approach would allow structures that weren’t of the “Washington slept here” variety to be held to different, less stringent standards. The hope is developers would be more willing to maintain a structure’s historic characteristics using less expensive materials, rather than demolish it in order to build a soulless box. 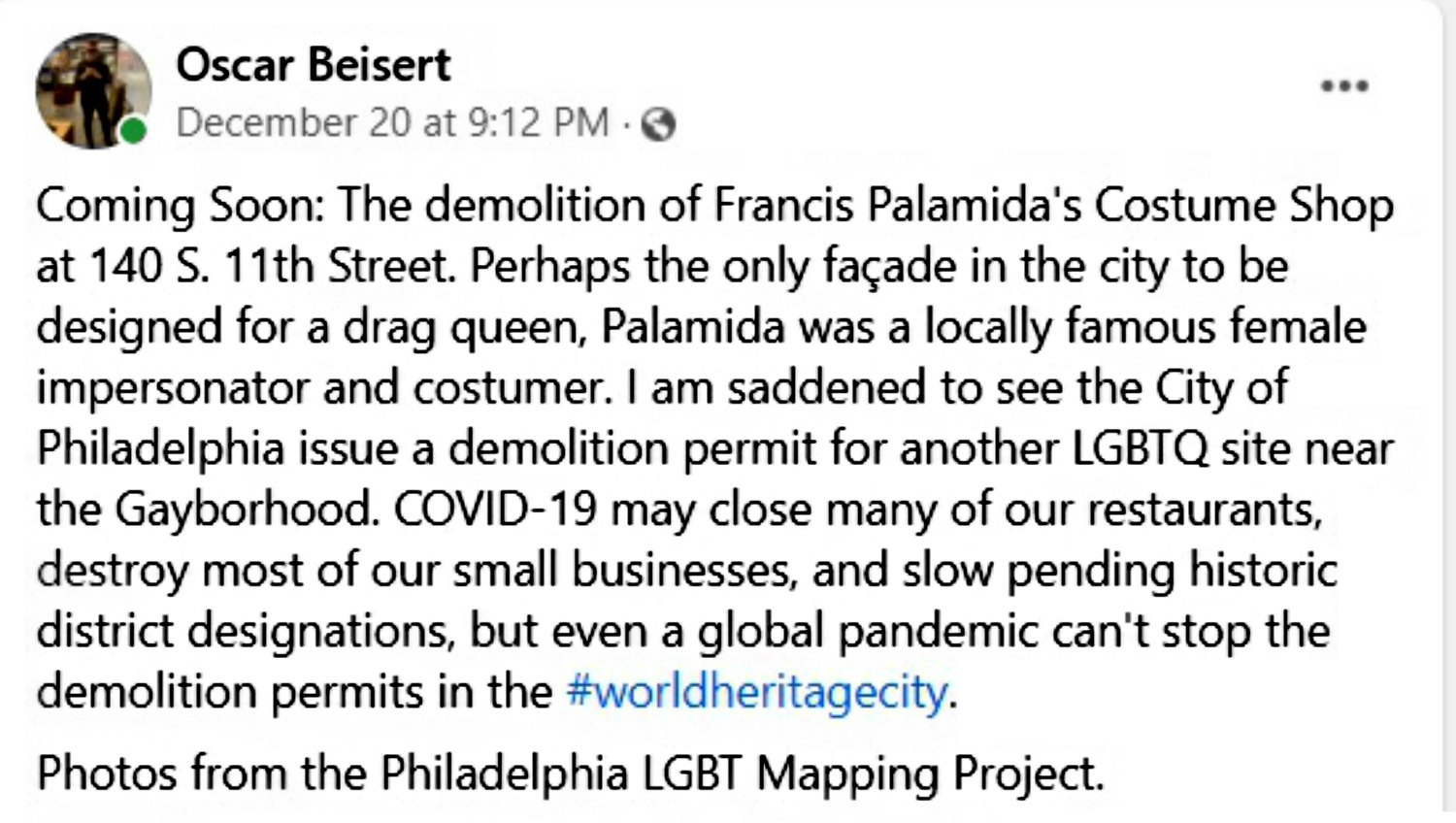 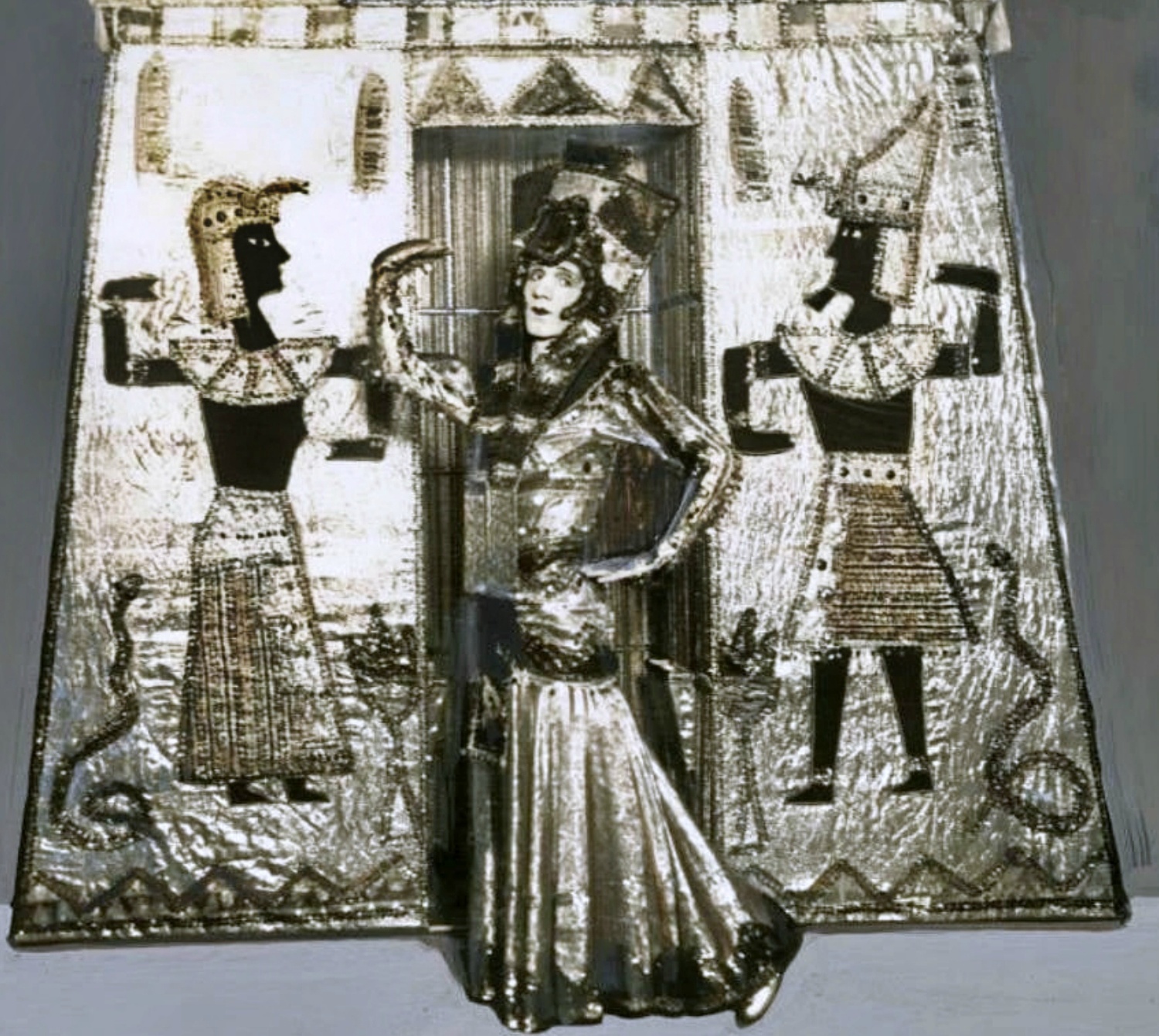 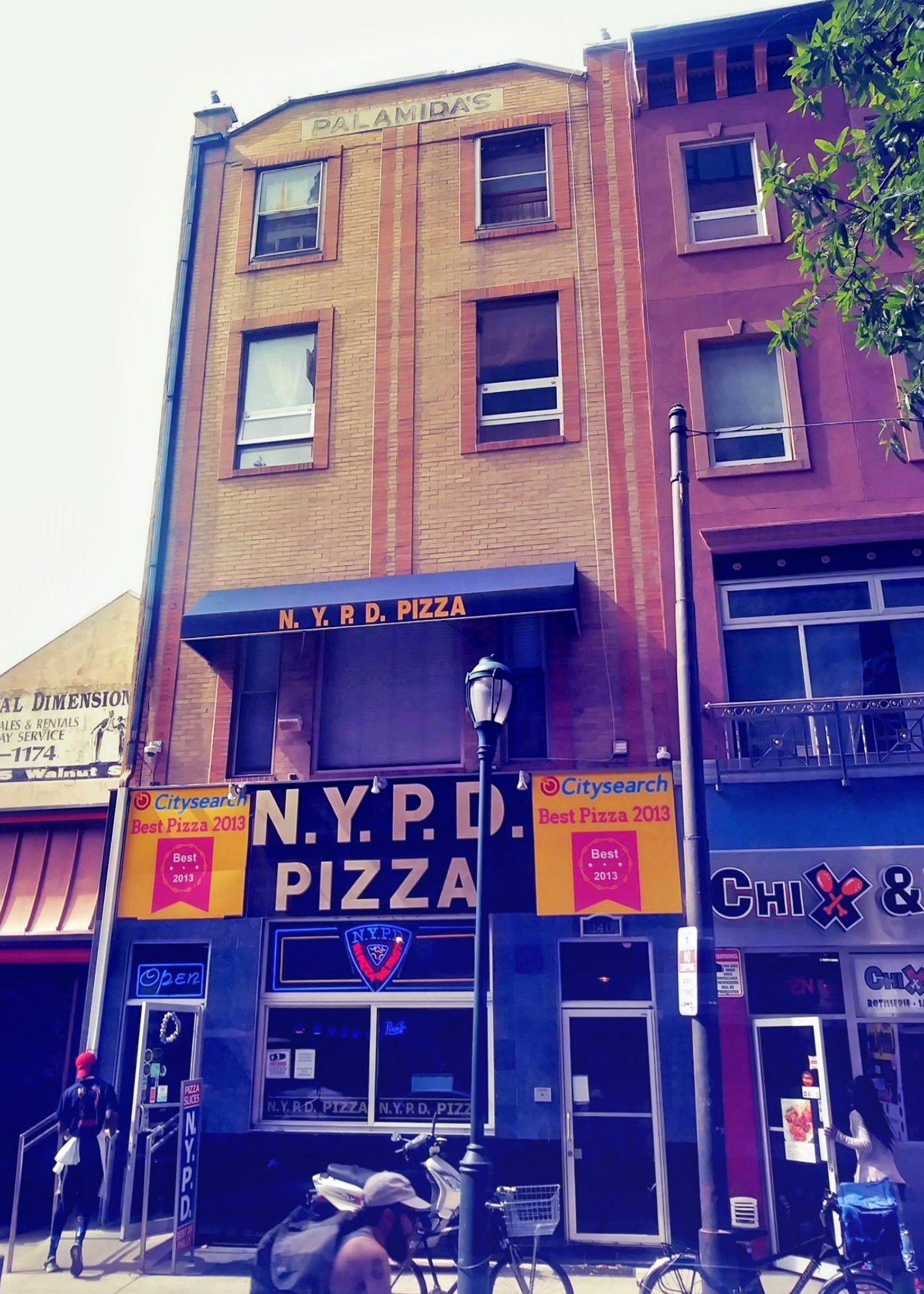 Beisert also sees a benefit for lower to middle income homeowners. “If you live on a nice block in Germantown and development starts to ramp up, why shouldn’t you be assured the same protections as somebody in West Philly or even Center City without having these stringent regulations that really are just based on a white glove approach?”

Beisert wishes tiered designation wasn’t necessary but he understands that “we can’t freeze the city in amber” and holding a hard line with developers won’t stop demolition. He’s had success using a tiered designation approach recently at Wayne Junction. Beisert consulted with Ken Weinstein about the Blaisdell Pencil Company factory on Berkley Street and persuaded him to use materials in the redevelopment that were similar to originals. “It isn’t as beautiful as if it had historically accurate windows in it, but at the same time, if you go out and see the space (now the site of Attic Brewery and Deke’s BBQ), it’s still a really cool reuse of the building.”

The biggest problem with tiered designation? So far it’s not official policy. That leaves Beisert and his colleagues at Keeping Philadelphia (keepingphiladelphia.org) to advocate for tiered designation as best they can in one of the country’s biggest (and oldest) cities. “Given how high the stakes are, we shouldn’t have to rely on advocates to fight for these things on a case-by-case basis.” 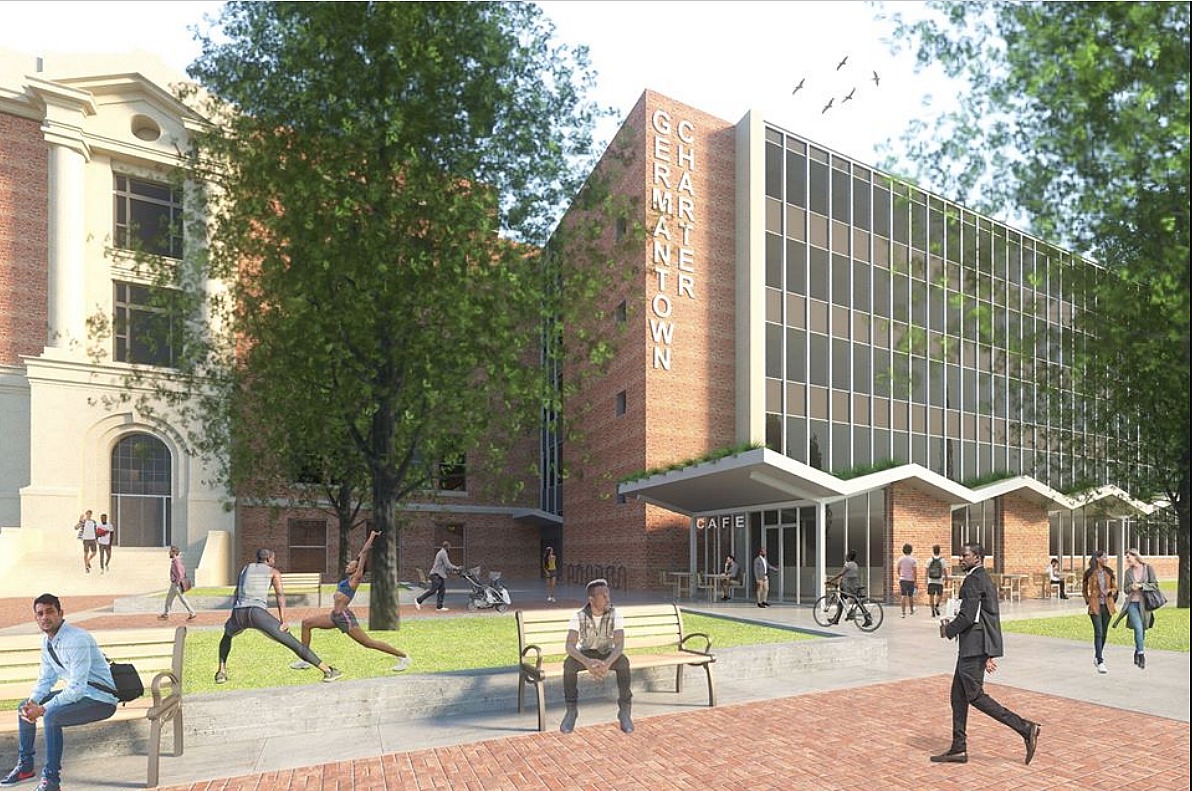 So what did happen with Germantown High? Like many, we thought a historical designation for the building would’ve given the community more leverage, not less (or none in this case). Oscar gives us some details:

“Well, it’s very unfortunate how that went down. I worked with Germantown United to nominate the property. There wasn’t a concern about the building being demolished, because it’s such a huge building. So that wasn’t a danger. But in the conceptual drawings from the developer, it showed basically a convenience store or McDonald’s sitting in the front lawn of the building, in an area that was really more of a park. And so one of the main concerns was designating the property so that the open park space would remain in tact. (By the way, I think the city should have protected the space before offloading it for a song to developers who would even consider proposing something like that for the site.)

“The other reason the site was nominated is that the building’s worthy of preservation.  But we really wanted to make sure that the park in the front was not built on, and certainly not with a McDonald’s or some other really insulting development. What unfortunately happened with that, though, is that it took so long for the commission to review the nomination and go through the process that it took a year to finally get on the agenda.

“Just as it did and GHS was about to be designated, a law was passed that changed zoning requirements for certain “special-use” buildings, which Councilperson Cindy Bass co-sponsored.

(Editor’s note: The preservation bill, signed by Mayor Kenney in Nov 2019, made it easier for historic “special-use” properties to be redeveloped and provided more flexible zoning that didn’t require a variance. A variance is one of the only ways a community can apply leverage to a developer because the developer has to engage in a community dialogue as part of the variance process). 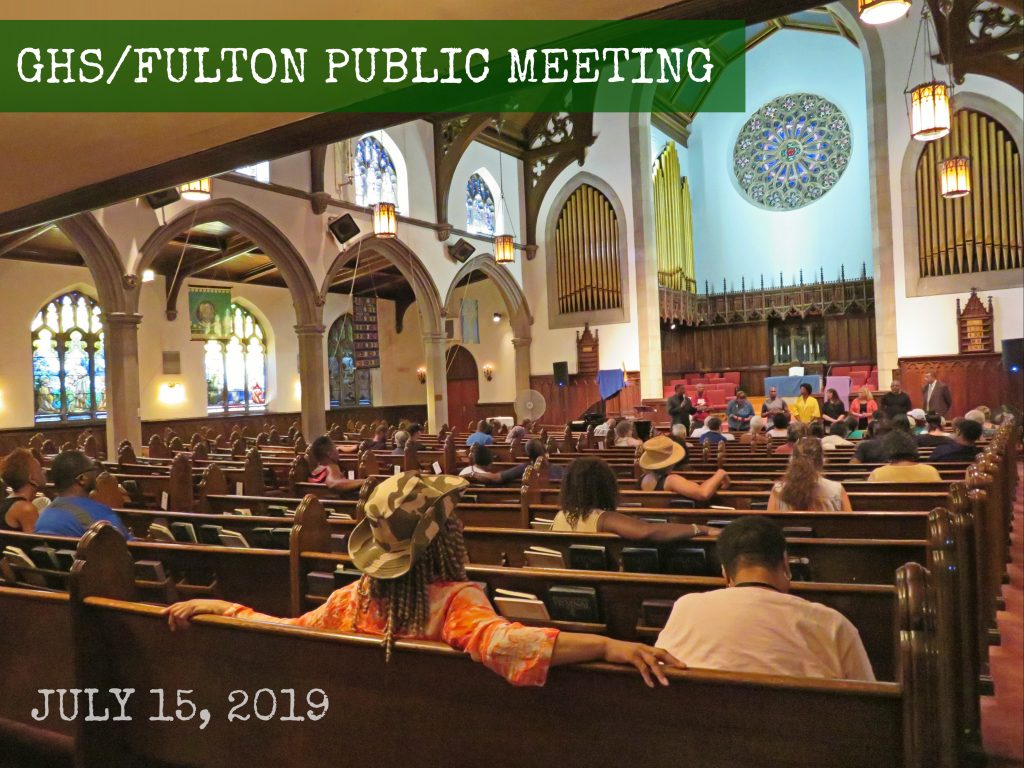 “So this endangered about six months of negotiations between the neighbors and the developer over a community agreement. We asked for a continuance, which was granted, but it wasn’t enough time for the neighborhood groups to get that developer agreement. So Germantown United asked for another continuance, but was denied, meaning that all the negotiations with the developer were moot at that point because he got his zoning anyway.

“It’s really terrible. If they hadn’t already started negotiations, I could understand the timing of this bill, but this made it much worse. As an advocate for development, especially preservation-oriented development, it’s questionable whether this particular incentive is really the best for communities. I think it needs to be revisited. But I wasn’t on the incentives committee. One of the things we recommended was a survey that would delay demolition for all the properties on that survey. Of course, that wasn’t acted on immediately — that’ll take years — but incentives for the developers? That got done in 24 hours!

“And I believe this incentive they applied to GHS was really meant for churches, because church buildings are extremely hard to reuse and they’re not really that profitable. But a school? An old factory? Those are actually pretty easy buildings to reuse. So maybe in order to get that incentive in the future, the developer has to check a few boxes first. As it is now, there are some basic inequities in how some of these things are done which is a huge problem.” 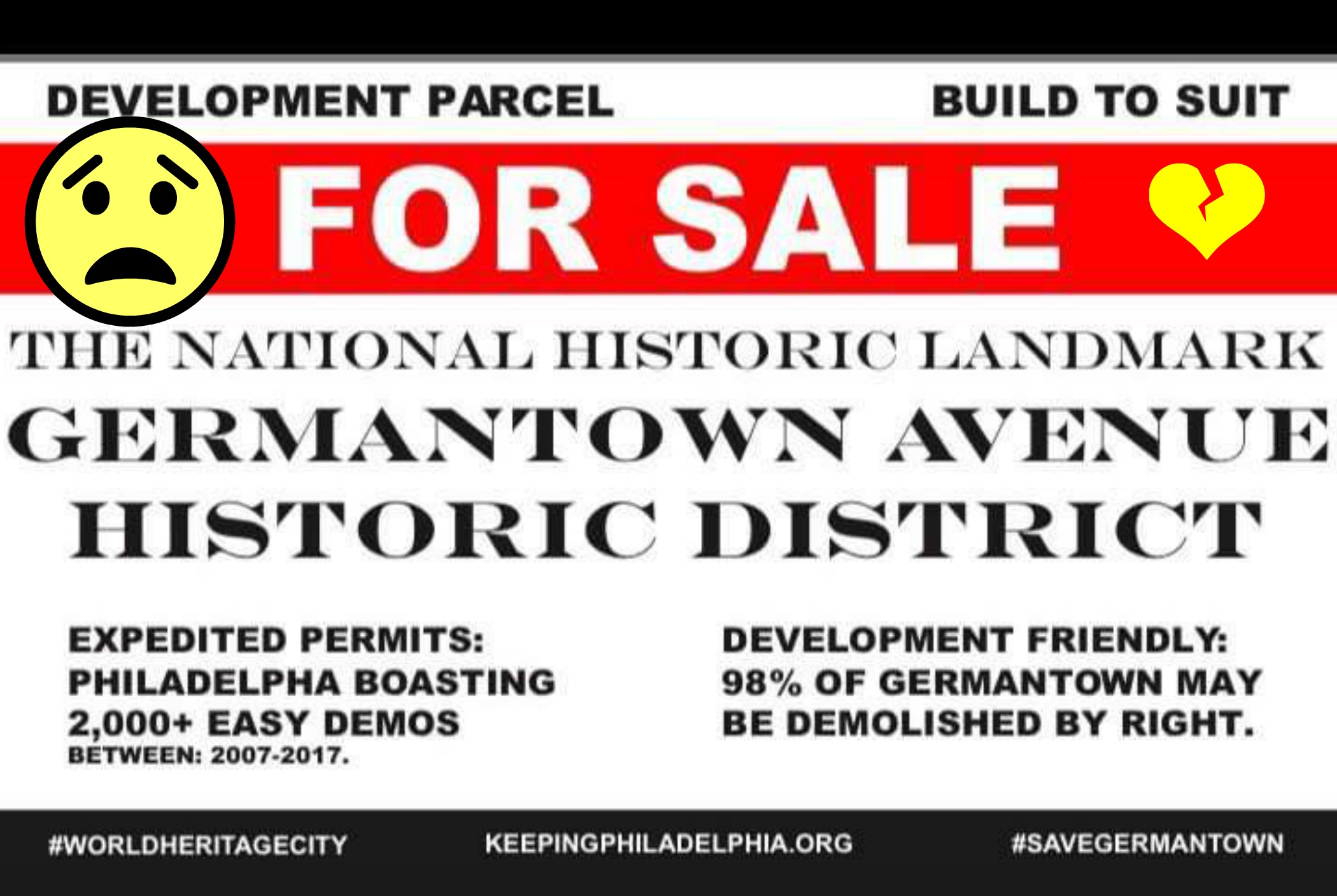 Fun Philly fact: Any property in Philadelphia can be nominated for preservation. If you know of a place in your neighborhood that could use protection (particularly if development is ramping up), email Oscar at keeper@keepingphiladelphia.org or call him at 717-602-5002. You can help with a nomination or make a donation to fund the organizations’ citywide efforts. You can also contact your elected representatives and tell them we need change, starting with having input on demolition of properties in our neighborhoods.

Oscar Beisert has successfully nominated dozens of properties to the local historic register. With a B.A. in Political Science and an M.A. in American Studies — American Architectural History and Decorative Arts, he has almost ten years of experience in Historic Preservation. Oscar is the founder of the Keeping Society of Philadelphia, and has recently renovated a 1880s carriage repository in Germantown. For his work in Philadelphia, Beisert has received the Board of Directors Award for exceptional contribution to historic preservation, as well as recognition from Save Our Sites and the University City Historical Society.

For your business and pleasure. Unscrupulously and doggedly gathered –and wistfully curated– by Dr. Karl Von Lichtenhollen [more…]

You Can Do So Much Better

Wow signs couldn’t be clearer that the GSSD’s just not that into you, Germantown. [more…]

Your Vote Counts (and other bullshit they’ll tell you)

Why we don’t matter and how it’s gotta change. [more…]