The Commission identified the bridge’s unique characteristics in its “Statement of Significance”:

“Falls Bridge, built in 1895, is composed of a variant of the Pratt truss form known as the Baltimore (Petit) truss. This particular Petit truss was developed in 1871 by engineers working for the Baltimore and Ohio and Pennsylvania Railroad and was more often used for railroad bridges than road bridges because of the greater stresses the railroad bridges required at the time.

After the Civil War, much of the innovation in bridge design was undertaken by railroad engineers who were able to take advantage of advances in iron and steel production. Thanks to additional, auxiliary subties linking the chords and the diagonal and vertical members, the Petit truss is a stronger structure able to span distances almost two and a half times greater than the original Pratt truss form. 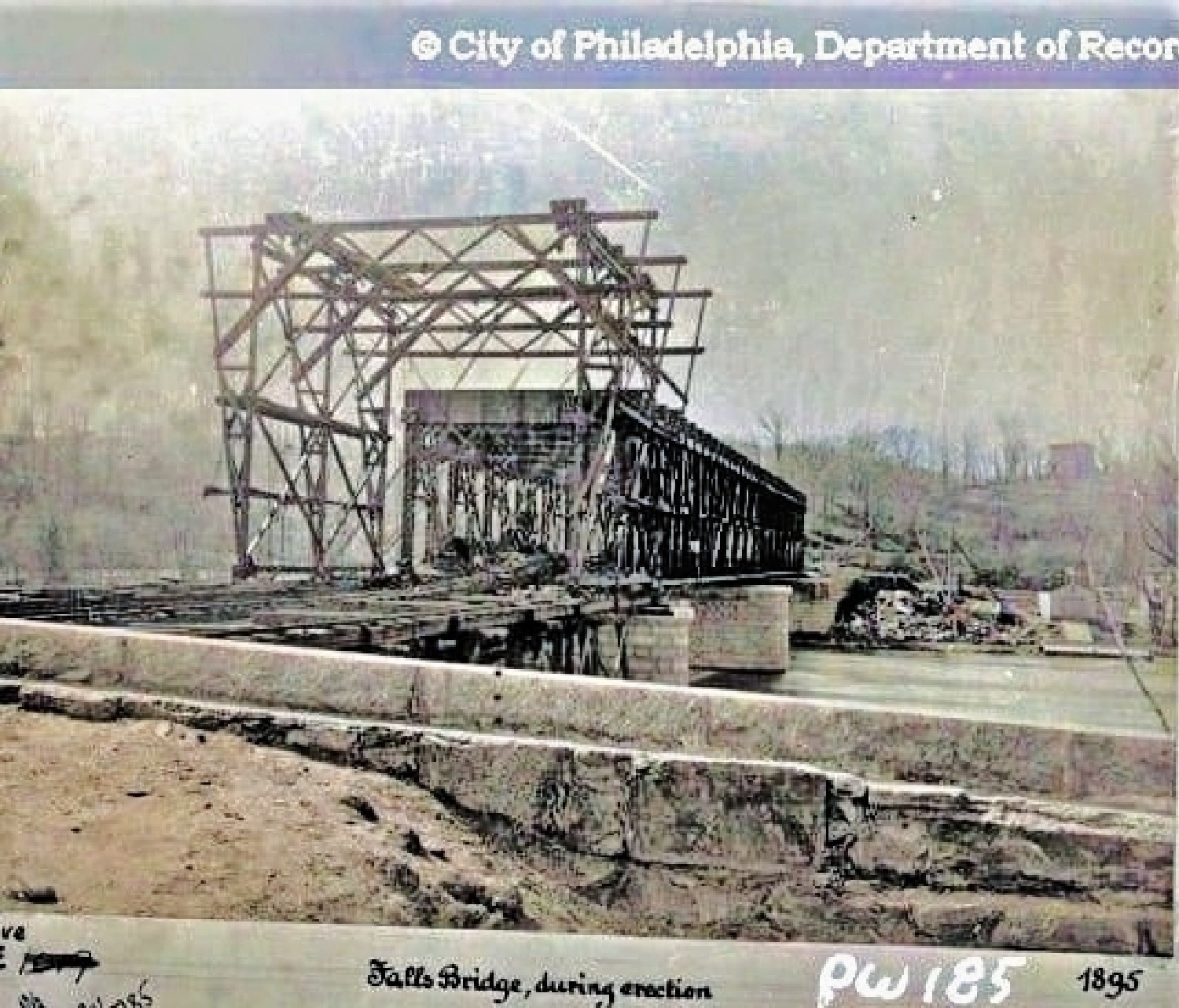 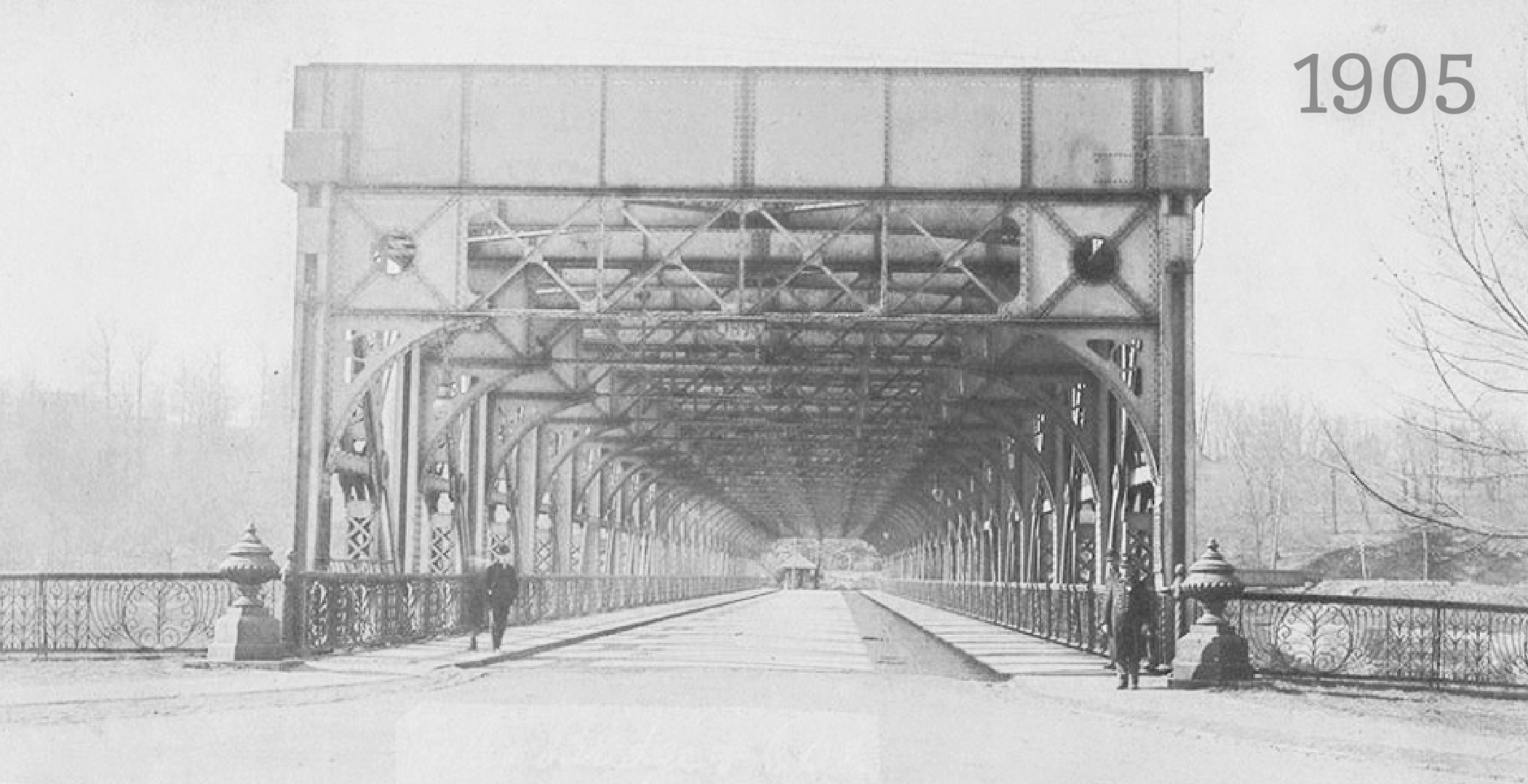 Where the Pratt truss could span up to 250 feet, the Petit truss could span up to 600 feet. The three spans of the Falls Bridge are only 180 feet, making this bridge exceptionally muscular. There are a few reasons for this, one being that there had been six failed bridges at the same location in less than a century. The designer of the new bridge was George S. Webster, freshly appointed Chief Engineer of the Department of Public Works and Bureau of Surveys of the City of Philadelphia.

Webster wanted to prove his abilities with this challenging project. It would have to withstand the battering storms, flood waters, and the high traffic loads of what he intended to be a double decker vehicular and pedestrian bridge.

At the time of construction, vehicular traffic was essentially horse-drawn carriages and carts. Modern gasoline automobiles were only just being prototyped in the early 1890’s and were not manufactured until the end of the decade, and even then it was a niche market for enthusiasts.

As the upper deck was never completed, this meant that the truss configuration, calculated for two decks of roadways in 1895,was able to take the ever increasing loads which traffic through the 20th century and into the 21st century have demanded of the lower deck.”

Badly-needed repairs are currently underway to shore up the Falls Bridge’s sagging support system, and freshen up with a new coat of paint (among other historically-appropriate structural and cosmetic updates). The bridge will be closed to motorists, cyclists and pedestrians during the major rehab, which is slated to start in winter of 2023. Read more about this project in Falls Bridge Fix (Dec 2021) which includes handy facts sheet plus neighborhood commentary.

TRUE STORY: Anyone can nominate a building for historic preservation! NW Philly is full of architecture that deserves to be saved for posterity. History buffs, get in here!  If you know of a place in your neighborhood that could use protection, email The Keeping Society or call 717-602-5002. You can also contact your elected representatives and tell them you support historic preservation.

Read the Falls Bridge’s nomination here, and for more information check out Hidden City’s report on this and seven other historical designations voted onto Philadelphia’s Register of Historic Places in January. Want to see one of those blue markers by the Falls Bridge? To apply for a plaque, just download the simple form (you don’t need any special permission but there is a charge of $70).

Don’t Be a DIY Dope

Projects you should (and shouldn’t) attempt at home.  [more…]

How Does Your Garden Grow?

What does your garden say about you? Identifying (and celebrating) neighborhood gardeners with skill & style.  Introducing: the East Falls Beautification Awards by Scott Frith of Keller Williams. [more…]