Before 2003, Kelly Drive in our area was a dead zone. EFDC’s Gina Snyder tells* how our Block Party took on a life of its own.

(*as told to us in a recent sit-down)

The Philly Bike Race — or, the “Philadelphia International Championship” — started here in 1985, a time when cycling was gaining popularity as a sport. My husband Dave & I lived in Atlanta in the 90’s, and when big races came to town, the streets would line with cheering spectators as the riders flew by. Spontaneous tailgating parties popped up everywhere; we quickly became big fans ourselves.

We moved to East Falls in 2001, and that Spring (2002)  Dave and I ran down to the river on Race Day, expecting to join throngs of partiers.  But there was nothing. The riders came by, but passed quiet, empty streets. 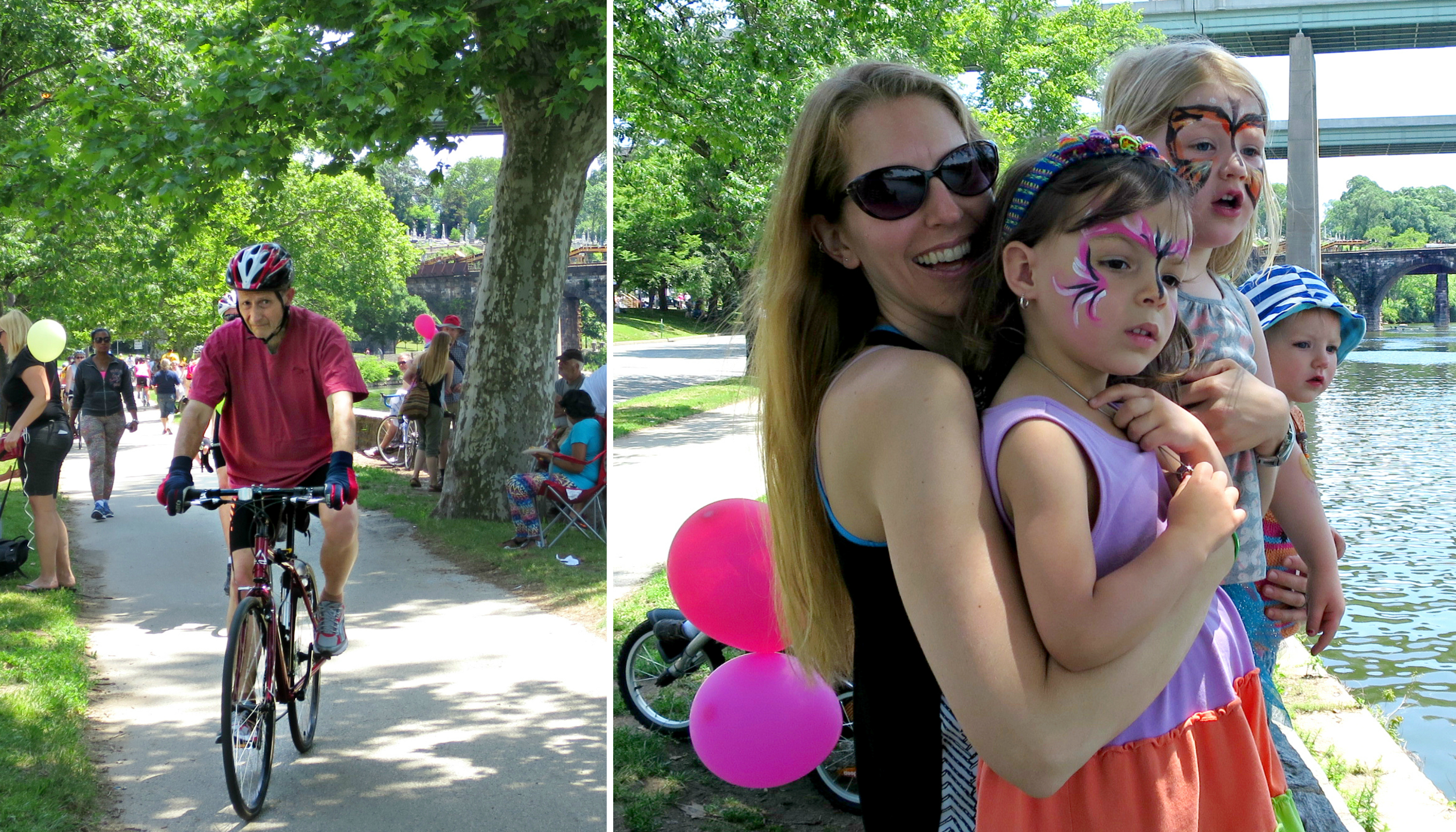 Where were the crowds? Where was the music? Why is no one here excited about World Class cycling? We might not have “the Wall,” but we’ve got grassy spots, leafy trees, the river… — a lot like Atlanta, really.  Sigh.

Fast-forward to 2003, when I wound up getting part-time work for East Falls’ new Development Corporation (I’m an attorney with a lot of experience in grant writing). One of the first things I thought of was the bike race!  If East Falls was looking to develop more business and recreational opportunities, what a great event to synch up with. 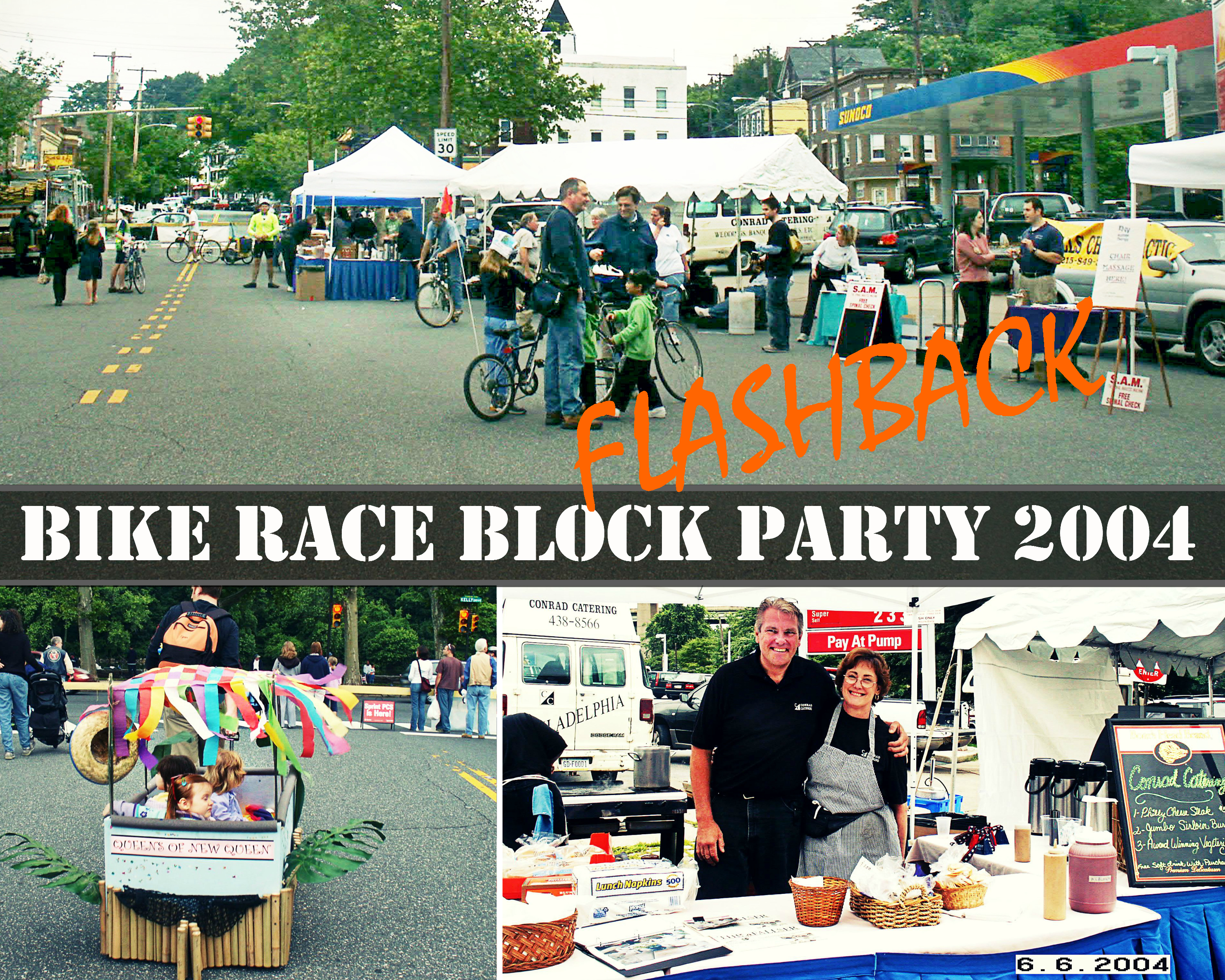 So the East Falls Bike Race Block Party was born. Our first race was 2003, we had just one vendor — Conrad Catering (Tom and Arlene Leschak, owners of Epicure Cafe) — a few hundred fans (this year’s race drew approximately 5,000), and a couple tents in the parking lot of “Verge” restaurant (now In Riva).

The cowbells didn’t even make their first appearance until 2005!

The biggest crowd we ever drew was 2014, when we had a zip line & a bouncy castle.  It was a great hit with everyone but, unfortunately, the vendors weren’t thrilled with the money they made, which is a bummer.

But this event is a tricky one, we don’t get massive crowds (which is nice) but that makes it harder to get vendors because they probably have other summer festivals or events that’d be more profitable. As a city organization, we can’t just flip thru the yellow pages and pick anyone, so our options are a bit limited.

This year, it seems attendance has leveled off.  We cut back from the carnival atmosphere and tried to provide more interactive things, like face painting and a make-your-own-bicycle craft booth for the kids. Those went over really well, but we’re still getting feedback. At the next Events Committee meeting, we’ll recap the day and exchange notes, and try to tighten things up for next year.

East Falls Bike Race Block Party takes a lot of staff and volunteers to pull off, and we hope East Falls neighbors have as much fun as we do on Race Day.  We’re always looking for more volunteers, and also:  party planners!  If you’ve got ideas, please consider joining the Events Committee, a group of businesses and neighbors who meet about once a month to discuss events such as the Bike Race and Dance on the Falls Bridge (an idea that spun off the success we had with the block party).

We’d love more input and participation to make the party even better next year! 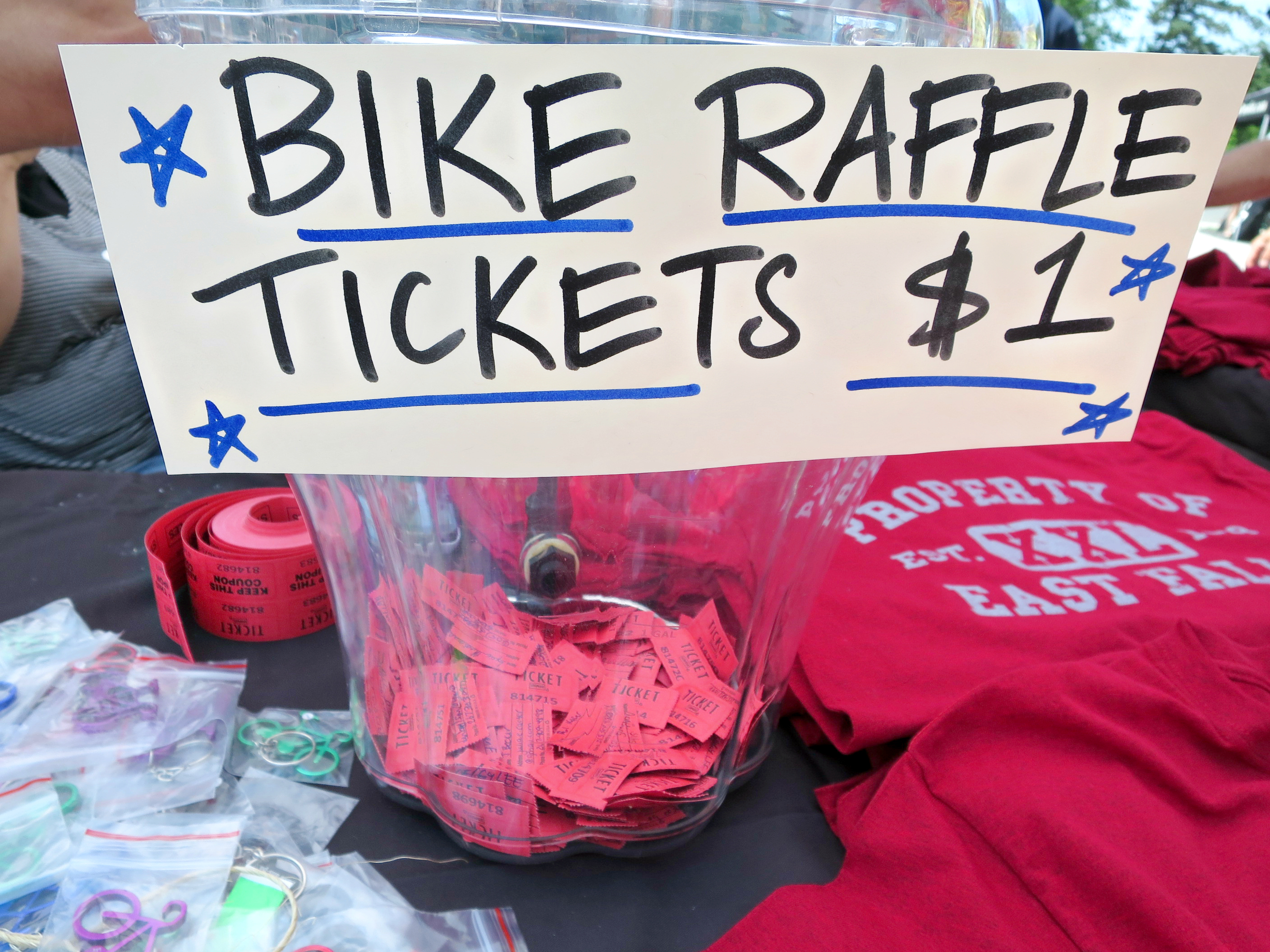 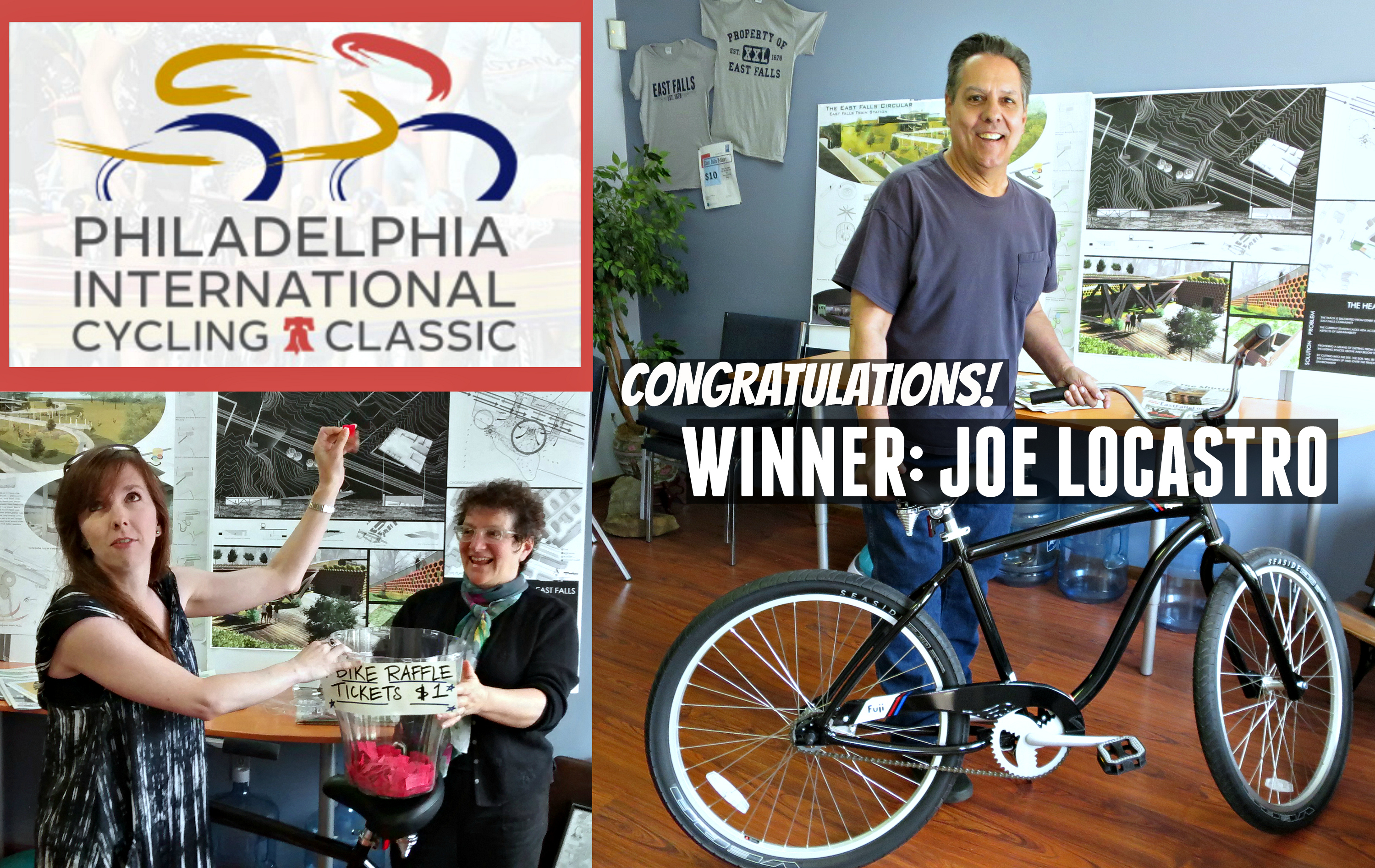 Lastly, our Bike Raffle brought in over $300 for EFDC to help support growth and development for the benefit of all East Fallsers.

Congratulations, Joe Locastro of Midvale Ave, winner of our Fuji Cruiser Bike Raffle. BuLogics CEO Felicite Moorman did her best “Vanna White” impression, pulling the winning ticket earlier this week.  Joe’s thrilled to win the bike, it’ll help inspire him to continue physical therapy so he can ride it, maybe as soon as two months (he’s recovering from a broken femur, so this certainly is some welcome good cheer). 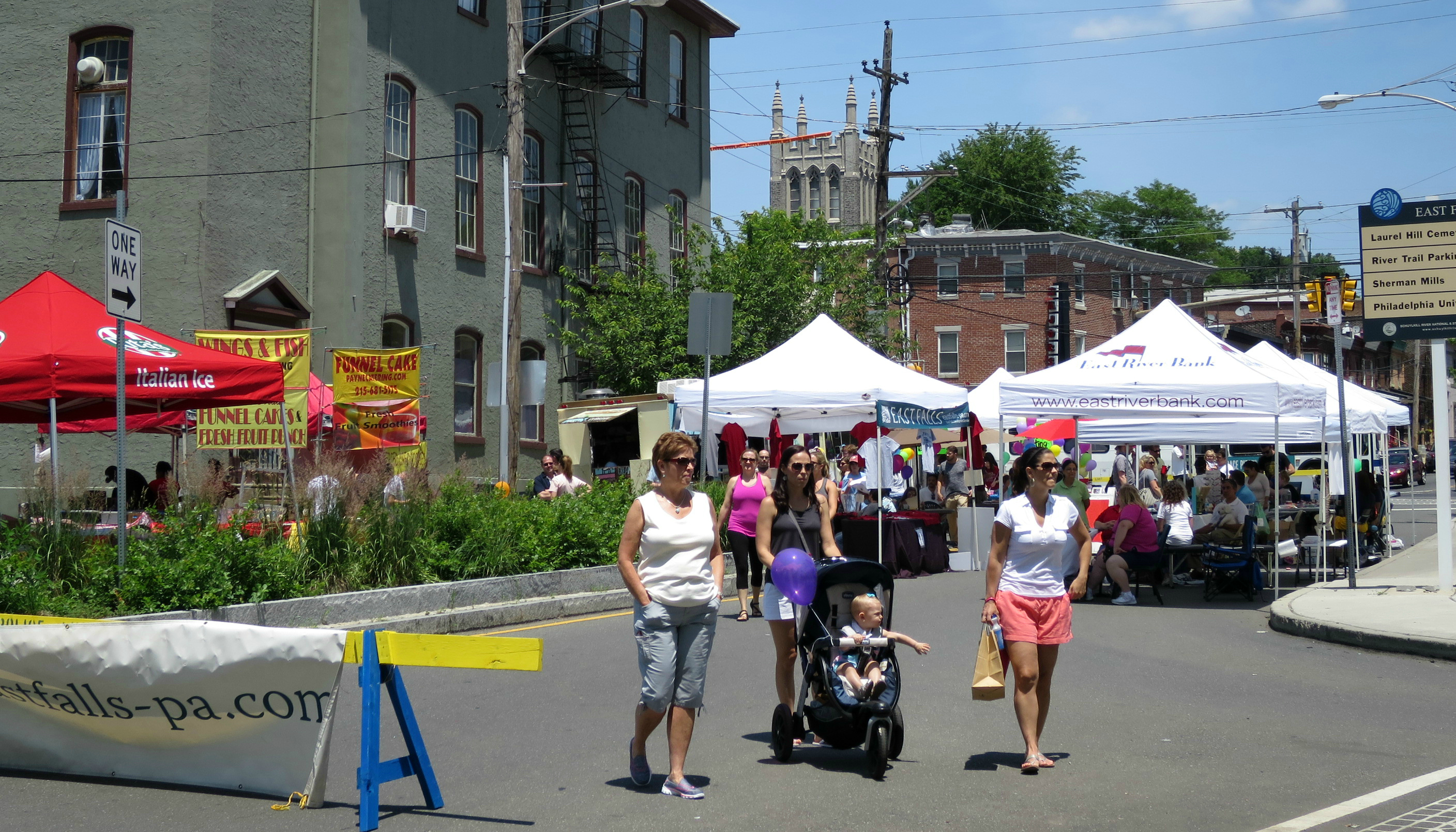 It was great seeing everyone at the Bike Race, thanks for coming out!

BONUS! Video of an early-morning lap…