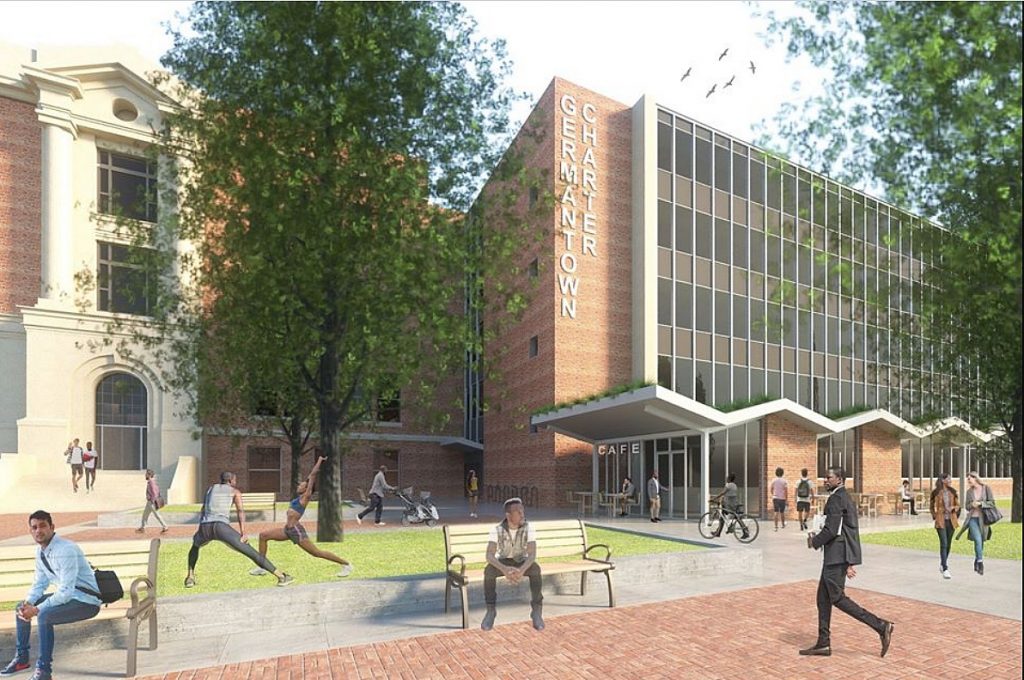 A city provision passed in November 2019 allowing “adaptive reuse of historical structures” gave the green light to a $50 million proposal to renovate the former Germantown High School site into a mixed-use facility. Only one problem – it allowed “by right” development, effectively cutting neighbors and neighborhood groups out of the zoning process.

The developers obtained use permits from the city last month, allowing a maximum of 277 residential units to be built within the existing high school building. Site designer Janice Woodcock, of Woodcock Design confirmed that the decision to move forward with the by-right project was made in April, and that the site owners pulled use permits last month to help secure financing.

Woodcock added that while there is no firm timeline for construction, neighbors will begin to see activity in the next couple weeks related to cleaning and securing the site.

Last year, City Council moved to ease zoning and parking restrictions in order to encourage the adaptive reuse of certain difficult-to-develop historically certified buildings, like churches or gymnasiums. The bill was signed into law in November 2019.

Neighbors React
The Living in Germantown Facebook page lit up at the news of the announcement.

Amanda H-F Can someone explain like I’m 5? Why does the historical designation allow them to circumvent community involvement?

Diane T. Amanda H-F Before the historical designation the owner planned to demolish everything including the trees and design whatever he wanted. The designation slowed his roll enough for the community to get a word in.

Suzanne M-K I don’t think it necessarily means that there is no community involvement here. The removal of needing variances makes it easier to get a new use proposed that isn’t previously designated. Normally when zoning changes are made with the city, it’s to cut some red tape associated with development of buildings with a historical designation that are sitting vacant like this one. It’s why we have all these historic churches that are condos now and it helped with the conversion of many old factories and warehouses as well. I do think this means that the community can’t get together to stop a new proposed use since the developer wouldn’t need to apply for a variance.

Suzanne M-K Also, like the comment above said, the historical designation also means they can’t just tear it down or significantly alter it. Which is a huge win for the community who wanted to see this school preserved 🙂

Amanda H-F The part about it not being torn down, I totally get. It’s the part where the developer is getting around community involvement that is confusing. Does the historic designation remove all variances? Again, I’m less familiar with how the local designations work. I can understand some variances, but things like parking requirements seem like they shouldn’t fall under that

Valerie B. Amanda H-F Germantown does not have a historical designation. The school was closed shy of its 100 year anniversary

Victor J. Valerie B. it was given it which allows them to move over zoning obstacles and necessary community input. They have all the power now

Diane T. Victor J., They don’t have all the power. They can’t knock the exterior and said they would not clear the trees for a parking lot in the front on gtown Ave. They are being jerks for not being transparent with the community. I could tell they lied at the 1st meeting when they told residents everything that the residents wanted to hear. I personally couldn’t understand one word that came out the man’s mouth.

Elizabeth G. Diane T. How do they not have all the power?

Amanda H-F Camille F. It seems like the new use of the building would need to align with the possible parking, then. Or, that they need to apply for variances, or meet the necessary parking requirements within the constraints of the historical designation. Not just that the developer can do whatever they want, as long as the historical portion is met. It’s more difficult, certainly, but meets the needs of the community in a better way.

Tanya P. Camille F. I would disagree & still not trust the deep pockets who make the descions that suit them best. I am the owner of a historically certified in 1966 3 story Victorian built in 1876. The almighty GFS is waiting for me to sell so they can demolish the whole historically certified block of Victorian homes. You know what they say ” $ talks”.

Camille F. I’m not an expert, but from what I read, there is no parking requirement with this historical designation: “Mayor Kenney signed a bill into law in November of 2019 aimed at aiding in the preservation of Philadelphia’s historic architectural treasures. The bill eliminated parking requirements for locally historically designated structures. It also gave zoning relief to owners trying to redevelop a historic property into a use that does not conform with the designated property’s zoning classification. For instance, it would allow a multifamily project within a historic church or factory building even if the building was not zoned for that use.”

Jennifer L. Amanda H-F as per the recent change of law, no historically designated building will ever have to go through ZBA for a use change permit. That means that all of those huge old churches, schools, homes, etc. that have significant community impact are automatically granted permits “by right”, and even directly adjacent neighbors will have no voice in the matter.

Elizabeth G. Camille F. so they have MOST of the power, but not all. Just most.

HISTORY LESSON: How did we get here?

For more information about Germantown High School’s dramatic development saga, see how it all began in “Caught in the Act” which features heated video from the first public meeting.

About The Local 112 Articles
The Local byline reflects community-created content (usually from social media, often from audio/video sources) that we've collected and edited into an article for our website/newspaper.

Give a hoot, but prepare to put your money where your mouth is.  [more…]