If you’re looking for a dramatic meeting recap, move along – last Monday night’s last minute community meeting about the former Germantown High/Fulton Elementary school campuses could not have gone smoother, especially considering the set-up: hundreds of neighbors filled the church to meet this property’s mysterious owner Jack Azran and his development team. Councilwoman Cindy Bass was there, along with her friend and counsel for the project, Darwin Beauvais.

Heading in, people maybe seemed a little miffed still to have been left out of the process these last two years the property has been sold and was being surveyed. But that vibe quickly faded as interesting plans were presented for three different scenarios to repurpose the architecture and green space with commercial & community enterprise: 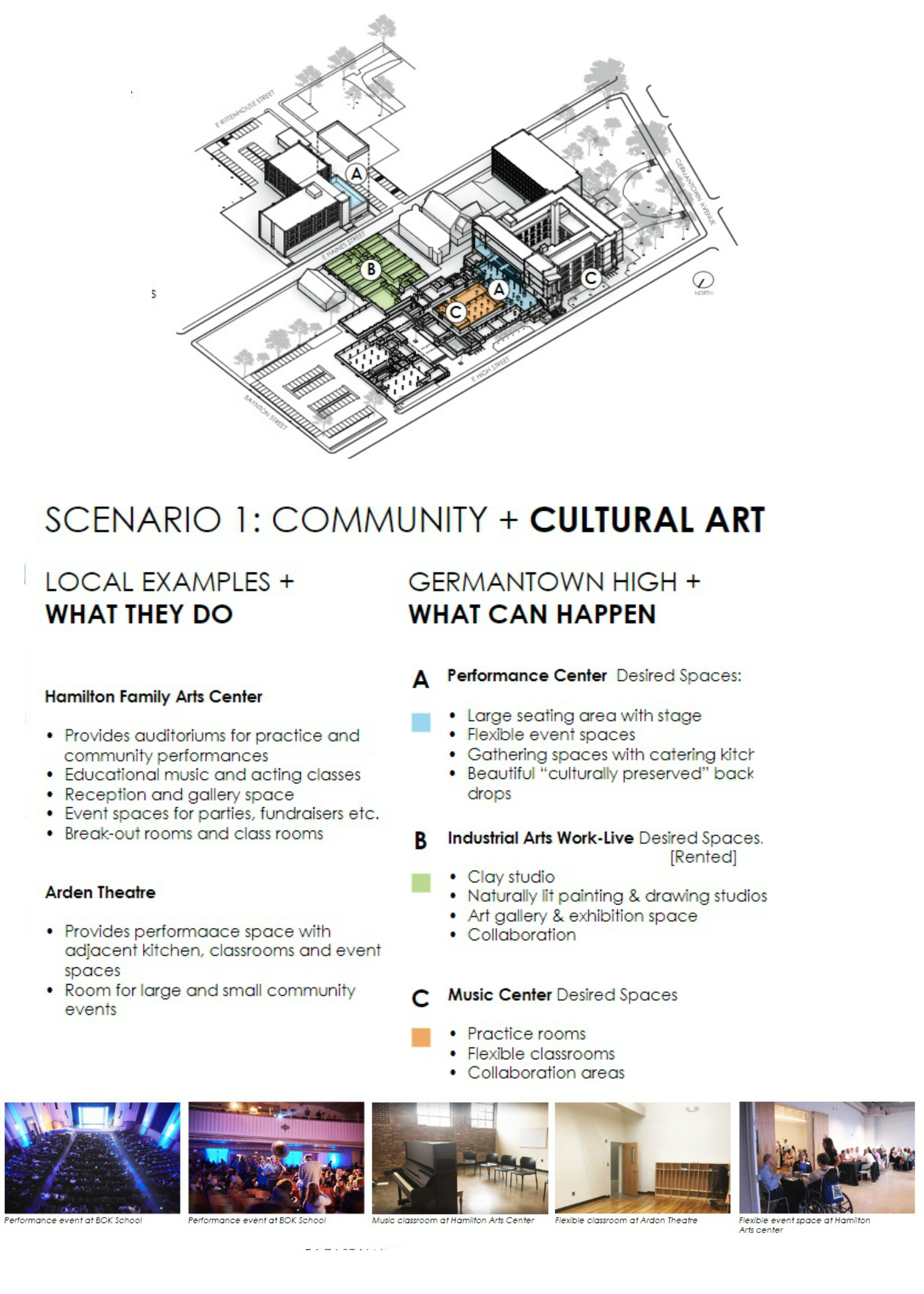 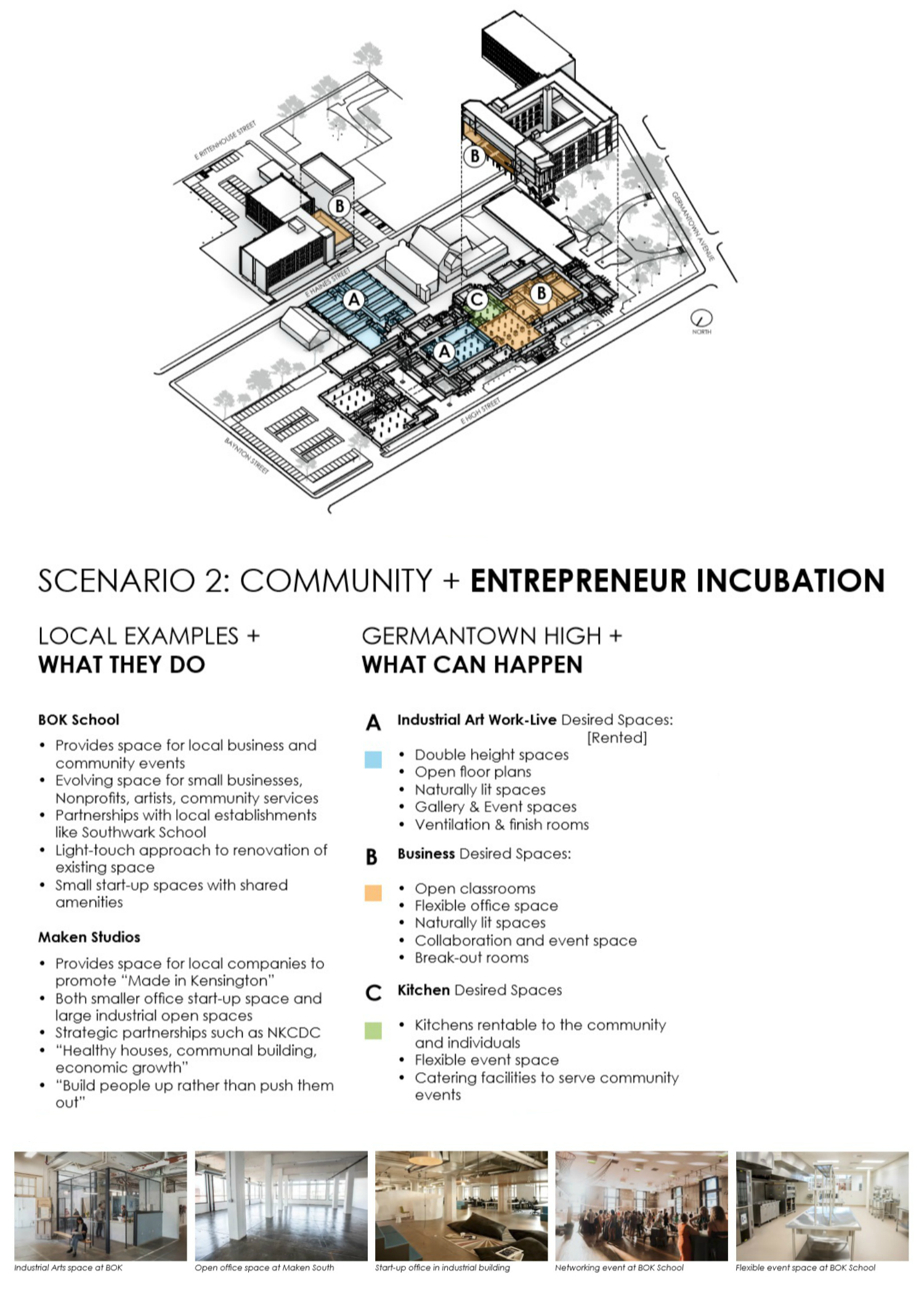 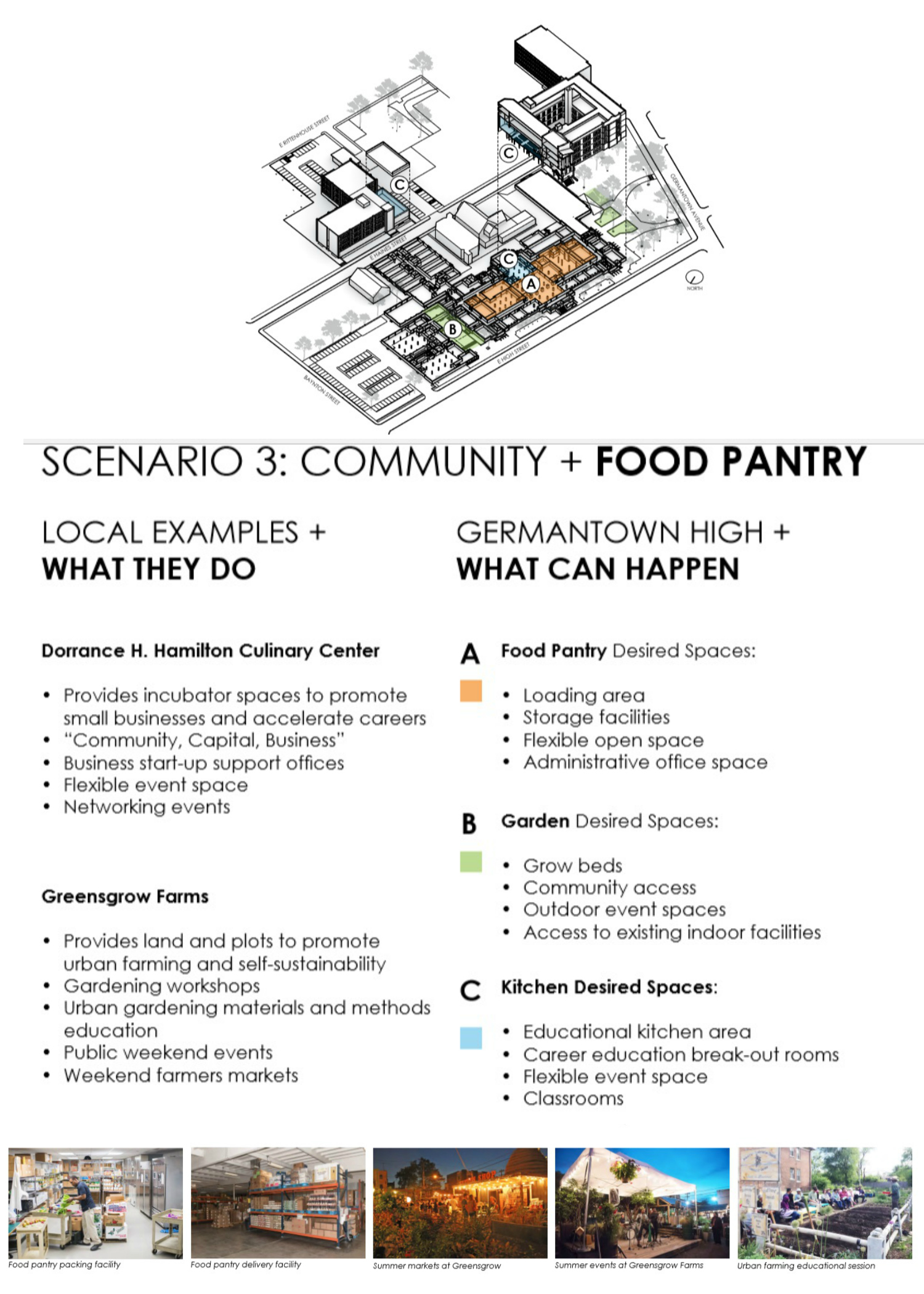 We’ve recapped video clips of what we feel were key points emphasized in the meeting (and discussed on various Facebook groups such as the Germantown Fulton Campus Coalition). View the full meeting video on Changing Germantown Facebook group or follow Bernard M. Jordan Lambert.

So, basically, Jack Azran and his team have been surveying and mulling over the Germantown High School property since they acquired it two years ago. BTW, the Fulton Elementary School property is a “done deal” as senior apartments so it is not a part of this planning process for GSH. (This information was a quick aside at the meeting – went right over our heads at the time, lol.)

Based on their calculations (and their previous successes on similar projects), they’ve come up with three very basic scenarios they could take this $30 – $50 million project they’re planning for GHS. At the meeting, they didn’t explain each design much individually but instead suggested that after the meeting the audience could view displays of each plan at both the front and back of the church.

For all scenarios, there were five “design drivers or parameters” that helped them define feasible concepts for the space given its location and history:

The development team pledges that whatever design is chosen for the Germantown High School project, it will “recognize how culturally important this site is.”  There will be cultural activities in this project. Beautiful space will be available for the community to use. Also, there will be plenty of on-site parking to accommodate any of these three plans:

“We don’t know yet, “ Beauvais stressed, “We are offering these suggestions for everyone to digest and come to talk to us. “

Plans seemed rather thoughtful for a piece of land that very recently had been so severely tax delinquent it was up for sheriff sale. Community advocate Yvonne Haskins brought that up, and there seems to be a reasonable explanation, connected to how cheaply the GHS/FES properties were sold. Here’s the development team’s response verbatim:

You ask me about what is the situation with the taxes. When we purchased this property we came to the City of Philadelphia and the School District to reduce the assessment for $14 million to $600 thousand dollars (unintelligible, someone sneezes). The city revenue tax never adjust the assessment. And it was in the process. Right now they reduced the taxes and it’s paid in full. And it’s no longer listed on the tax sale.

All of our property in the City of Philadelphia is given an assessed value. That assessed value was attributed to the school at a price of $40 million. (Audience member “That’s not what’s on the record, sir.”) We note $14 million, I’m sorry, $40 million is the construction. So, but that amount was wrong and we disputed that amount. That amount was… But because it was assessed, there was a tax bill that the system said, “You have to pay the taxes.” There was a filing to appeal the assessment. That appeal was successful. They entered into a lower assessment agreement. And those taxes, based on that new assessment have been paid, postponing the sale. And that’s where we are.

Taxes paid: $21,000. They’ve been occupied with the tax thing for the last six months but now they’re ready to move forward. They plan on meeting with the community in July or August. And meanwhile have pledged to put up a Facebook page where neighbors can post “whatever you guys want” and have an online dialog with the development team in addition to regular meetings (see update below).

We think it’s important to note a recent Philly.com article quotes a City representative that the Office of Property Assessment is “processing revisions” and that the sheriff sale has been postponed to September 18th. Despite the developer’s claims Monday night, the property’s taxes have not been paid in full: Azran still owes $427k+ in back taxes on GHS and $244k+ on Fulton Elementary. (The article says they plan to pay in full by Monday.)

Another good question with an even more satisfactory response – neighbors asked Jack Azran directly if he’d consider signing a Community Benefits Agreement with Germantown. He answered, ‘Yes, absolutely,” and added that his company has signed agreements with communities in the past.

He also fired off a few names of development projects he’s worked on in the area, to give audience members a chance to know him better. He’s built all over Philadelphia and even the shore. FYI, in 2017, Jack Azran’s project at 135-137 North 3rd Street was a Grand Jury Award winner from Philadelphia’s Preservation Alliance.

Following up, an audience member thanked Cindy Bass for coming to the meeting, and asked her directly how she could – and would – leverage her position to negotiate a Community Benefits Agreement with provisions for local & minority jobs and affordable housing.

Cindy Bass: Excellent questions. The first question, in terms of… Let me go through the last one first actually my… I’m taking it as, local participation, minority participation. I do want to acknowledge that the president of Local 332 is here Sam Staten – Sam, if you want to <raises hand> — which is the City’s largest minority Union in the City of Philadelphia and so it’s important I think that he’s here tonight because this is where the rubber meets the road.

We will not do this project with 10% minority participation or even 20% — and I know, Jack, that those are the numbers you’ve been working with in the past, but there has been a problem in the City of Philadelphia with minority participation across the board. There was a recent article that talked about sort of the divide here in Philadelphia. And I’m not gonna go all the way into it but about the divide in Philadelphia and how systematically the people of color (particularly African Americans and Latinos) have been secluded or removed from these opportunities. So we’re gonna make sure that that does not happen.

Regarding your first question which I believe was around how do we assure that the wishes of the community are heard – was that an accurate way of summing that up?

Audience member: I think if we – if there’s a residential component to this project, having it be affordable housing.

CB: Well I will just say this. And I’ve said this before, and I’ll say it again. Everything we do in the 8th district is always always always community-driven. If the community doesn’t want it, we don’t support it and it’s as simple as that. This is going to require zoning. This is going to require a zoning variance. The only way to get that support from our office is if it is something the community wants and has made clear that this has been, uh, gone thru the appropriate process. That it’s been thru an RCO meeting, that the community has met and talked about it. And then it will go thru an RCO process and then our office would be in support of what it is the community is interested in.

So at the end of the day, I certainly hope – and I’m gonna say on the record – I certainly hope that affordable and low income housing is a part of it. We have a severe crisis here in the City of Philadelphia and we need to address it. So if there is room for that in the project to make the numbers work we certainly will hope that you all can include that in your project but at the end of the day what the community wants is what it is that we are wanting in support of.

Good answer… I guess? It played well at the meeting, but typing it out I’m noticing she never actually promises affordable housing. Just that she won’t oppose it. Well duh. What kind of maniac wouldn’t support affordable housing for Germantown?

We were kinda hoping she’d take the opportunity to activate her super power for the crowd. Could you imagine? “I promise to use my councilmanic prerogative!” she might’ve said, “If these guys want to make money here, we’re giving them a list of demands for the neighborhood.”

Jobs, education, affordable housing, resources and services for all income levels. How’s that sound? In the meantime, the developers seek feedback from the community regarding which plan they like best, and what they’d like to ultimately see for this beloved local landmark.

What did we miss? Let us know in the comments below or submit your own recap to editor@eastfallslocal.com for a possible feature. Stay tuned for the next meeting announcement expected early this summer!

Get involved! Join one (or all!) of these community Facebook groups and pages to stay current on new info, projects, committees and more:

Living in Germantown: All Together

Thank you for reading — and please share! We work hard to cover community news and whenever someone shares one of our stories, it’s like a little hug of encouragement that helps to keep us going.

Discover Lover’s Leap this winter when the trees are bare, and views are extra-wide and spectacular. [more…]

Meet the new owner of the old Tilden Market. [more…]