A peak at what’s behind John Wister’s historic estate 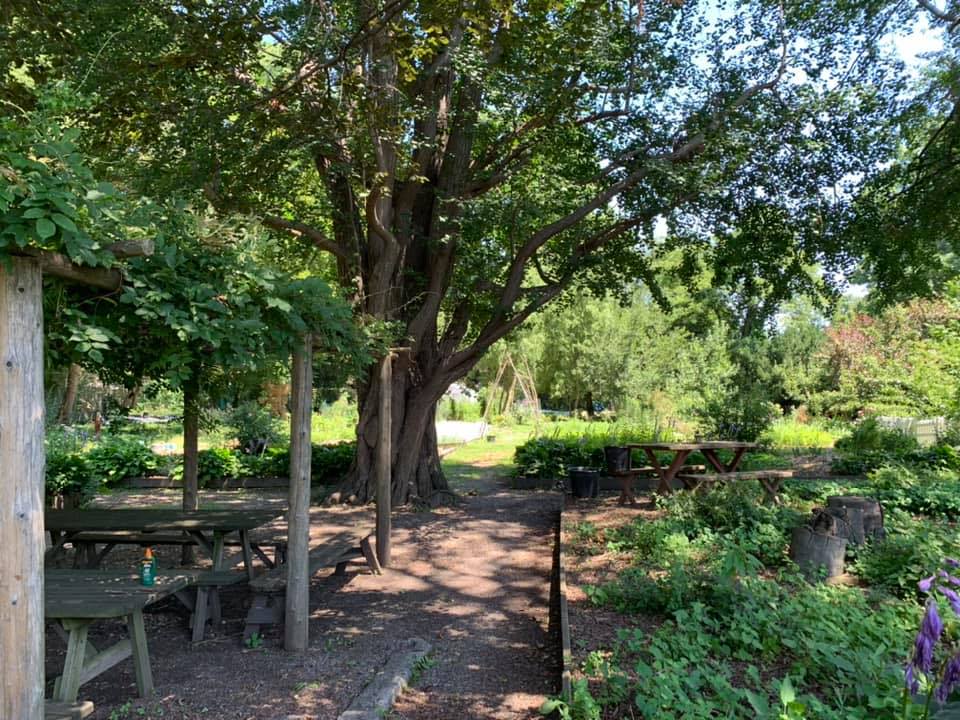 This is what you see when you go around back at Grumblethorpe, the historic house located at 5267 Germantown Avenue. (AKA “John Wister’s Big House”.) Built in 1744 by wine merchant John Wister as his summer residence, it became the family’s year-round home 49 years later, when they moved to Germantown permanently to escape the yellow fever epidemic plaguing the city of Philadelphia.

The big tree in back is the one you can blame for all those berries that stink up city streets and are prized by old Chinese ladies who cook their nuts: It’s one of the oldest gingko tree in the United States, age about 266 years.

Beyond it is a working vegetable garden and greenhouse, the remnant of the very productive farm the Wisters owned. Local youth staff a produce market at the house on Saturdays in season.

The stones for the house were quarried on the site, and the wood came from nearby Wister Woods, which the family also owned. (That plot is now part of the city park system.)

The Wister family was one of the original German migrants who settled Germantown starting in 1683 at William Penn’s invitation. John Anglicized his surname by replacing the A with an E. A sibling didn’t, that branch of the family later endowed the Wistar Institute, the world-renowned biomedical research facility on the Penn campus (it’s independent of but affiliated with the university).

Grumblethorpe* welcomes visitors and volunteers. Including you.

*I said to the gardener/docent that the name sounded like a character out of Dickens. He said that Wister did name the house for a character in a favorite novel of his. (Editor’s note: “Thinks I to Myself“, written in 1811 by British author Edward Nares.) According to the “Weird Darkness” website, the novel was about a German family in England. How fitting. More info: HERE

About Sandy Smith 9 Articles
Sandy’s interest in journalism stretches all the way back to high school, and he’s been scribbling away ever since then, either in the field or in its hired-gun cousin, media relations. He currently runs the Real Estate & Home channel at Philadelphia magazine's website, phillymag.com. You'll find his column on trends in real estate and design in the print edition. Cities and the built environment float his boat, as does rail transportation, and he’s written about all of the above for Philadelphia-area media and beyond. His work has also appeared in Next City, The Philadelphia Inquirer, Hidden City Daily and several other regional publications. Sandy is a Kansas City native who currently lives in East Germantown. Follow Sandy on nwlocalpaper.com and social media -- Twitter: @MarketStEl Facebook: WriterSandySmith

On the Shoulders of Giants

Long before the George Floyd protests ignited around the country and the world, Germantown’s own Reverend Doctor Leon Sullivan led a charge for the rights of African Americans. [more…]