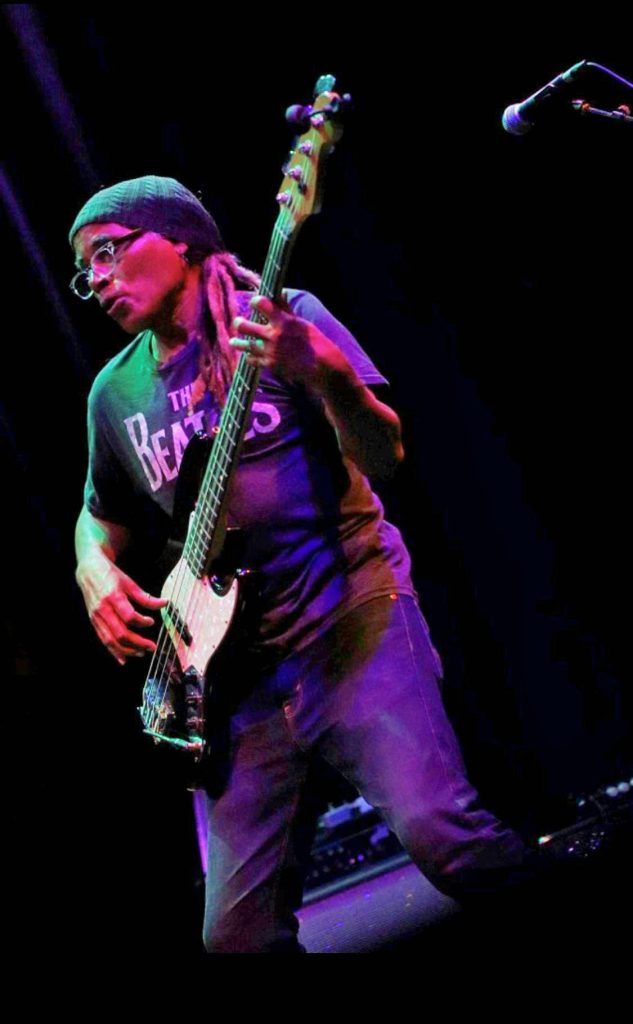 For more than 40 years, musician Garry Lee has been a vital part of the Philly music scene as a bass guitarist extraordinaire, songwriter, and music producer.

Lee has not only achieved acclaim with some of the area’s most notable acts — including The Daves and June Rich — but also accompanied an array of Philly legends throughout his distinguished career.

Currently, Lee is a member of the Greg Sover Band, whose new single, “Politician,” a reinterpretation of the 1968 Cream song mirroring a time of political unrest similar to today, was timely released on June 2nd- the day of the Pennsylvania primary elections.

“When I began thinking of redoing a song, I considered the fact that “Politician” still resonates today, we just had to get it out on time,” Lee said.

Growing up in Germantown in the 60’s and 70’s, Lee resided on Washington Lane with his parents and three siblings. He credits his parents with instilling the discipline and responsibility so vital to his success.

“I hated yard work, and my mother and my father would sit us down every night and have us do arithmetic and reading too. As much as I hated it, that was the stuff that built character. My mother was very much involved and I’m very grateful,” Lee emotionally stated.

“I was probably the only African-American playing French horn in the band, but I used to improvise with French horn solos,” Lee said.

At the age of 12, however, Lee discovered his passion for the guitar and was playing in neighborhood venues by the time he was 15.

“There was a club in Germantown called Togetherness House, where we would get together and they let us play. It was a good little scene in Germantown at the time,” Lee stated. (FUN FACT: Kevin Bacon used to play there in the 70s. He’s on the conga in this recording from 1975. Six degrees indeed.)

Lee, inspired by artists such as the Beatles, Joni Mitchell, the Grateful Dead, and Cream, soon became captivated by the bass and consumed with learning the instrument.

“When I started playing, Cream was one of my bands where I took a lot of bass from. There was a time I spent six-seven hours a day in my 3rd floor apartment on Indian Queen Lane (in East Falls) just practicing the bass.”

Although he once considered a career as a writer and journalist, Lee quickly recognized he was destined for the unpredictable world of music.

“I started playing and as time went on I ‘ran away with the circus’, as they say. I decided being in bands was what I wanted to do and was in one band after another,” Lee said.

Lee first found success in the early 80’s with Avila, an acoustic-based trio with husband-wife Juan and Jennie Avila, which became regionally popular, even opening for comedian Robin Williams at the Tower Theater in 1985.

In 1989, after several years with Avila, Lee auditioned for legendary rock & roll band The Daves, who, at one point, was the biggest, unsigned regional act. Lee, having recorded a 4-song demo with the band, earned a nomination for “Player of the Year” at the WMMR-sponsored Street Beat Music Awards for his work on the album.

Reminiscing on his time with the band, Lee said, “I miss those days, when fans flocked to see live bands and hear original music, showing up multiple times a month to multiple venues to see their favorite band. When rock stations and record labels would come out to shows. That was a great era in the Philly music scene.”

When The Daves split up, Lee formed Rhythm Cats Revue, which he describes as “a musical collective in which the rhythm section remained the same while the front-people changed throughout the night, and did the whole Abbey Road to end shows.”

He also began freelancing and has accompanied a multitude of renowned artists, including Ben Arnold, Joseph Parsons, Tom Hampton, and Jazz harpist Gloria Galante, among other Philly notables.

“Like most players that want to do music for a living, I had to diversify and be flexible,” Lee stated.

In 1995, Lee accepted an offer to back up two female vocalists with a band called June Rich. The group soon emerged out of Grape Street Pub in Manayunk and, with Lee’s funky bass-riffs, took Philly by storm.

“It was one of those unexpected things,” Lee said. “We started playing live at Grape Street every Wednesday and had a great time, a big buzz, and big following.”

By 1996, June Rich became the first band to play opening-night at the Electric Factory and was voted “Best Band in Philadelphia” by Philadelphia Magazine. They also became a staple on the national music-festival circuit, playing big-names like the Telluride Bluegrass Festival in Colorado and the only local band to play main stage at the Philadelphia Folk Festival.

A seemingly inevitable record deal never materialized, and the band parted ways in 1999. However, in 2015, June Rich’s original lineup reunited for a sold-out 20th anniversary show at Ardmore Music Hall, also rereleasing an anniversary-edition of their debut album.

For the past 18 years, Lee has performed with renowned R&B-blues vocalist Deb Callahan and the Deb Callahan Band. He started producing music, as well, and with his partner Mike Tarsia — ex-owner of Sigma Sound — produces the Greg Sover Band, with whom Lee reached semi-finals at the International Blues Challenge in Memphis two years in a row.

With the Greg Sover Band, Lee also arranged for the 2015 hit “My City” — a love song to Philadelphia — to include vocals by children from North Light Community Center in Manayunk. The organization, providing programs and assistance to local children and teens, has been close to Lee’s heart since he taught for eight years as their camp’s music director.

“I was teaching, and they were soaking it up, which was amazing,” Lee said.

In 2006, Lee released his own album titled “Six Degrees of Garry Lee,” a collection of songs he has played throughout his remarkable career.

Lee has been gigging for more than four decades, though COVID-19 has hindered his ability to perform in recent months. A long-time resident of East Falls, Lee enjoys visiting sites like Laurel Hill Cemetery on daily walks with his canine-sidekick, Mr. Griffin, but having so much time on his hands just makes him anxious to get back on the stage.

“What I miss the most is being able to be close, physically close, to audiences, to exchange that energy between the audience and band.”

About Leah Matthews 2 Articles
Leah Matthews was born and raised in South Philadelphia, where she still resides to this day. She lives with her husband of almost 20 years, their daughter, Giana, and their dog, Seven. Currently, Leah is an honor student studying Mass Media at the Community College of Philadelphia. With a lifelong passion for writing, she anticipates becoming a journalist upon graduation and authoring a book someday.

6/27 Theft 4500 Kelly Dr. (Schuylkill River Trail lot) 12:10PM Complainant left his sunroof open when he parked his car. When he returned, he noticed his gym bag was missing. The bag contained a laptop, [more…]

A new life for thousands of prayers from East Falls and around the world. When Pope Francis visited Philadelphia in 2015, two East Falls artists — Dan & Stephanie Ostrov on Stanton Street — were [more…]

Living a Dream on Indian Queen

What kid hasn’t wished they’d be a rock star when they grew up? One Fallser went from singing into a hair brush to a real microphone, picking up a star sidekick on the way. [more…]