Some reactions to this summer’s tragedies in Dayton and El Paso defy reason. 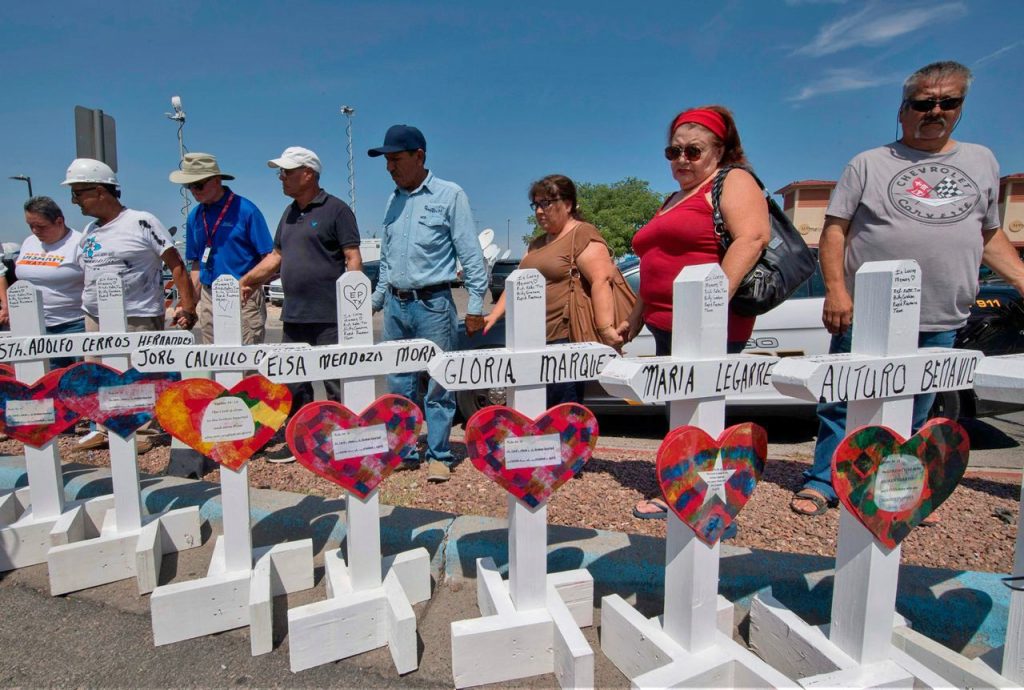 In a normal, reasonable world, after the tragedies in Dayton and El Paso, a country would mourn together in an effort to heal, console and vow to do everything in its power to stop mass shootings from ever happening again. But these are not reasonable or normal times and even the deaths of 41 Americans killed by gunmen with links to the far-right since last October cannot bring such a fractured nation together.

Some Republicans continue to deny that the President’s violent, misogynistic, xenophobic and racist rhetoric has enabled these increased acts of terrorism. They point to the Dayton’s shooter’s social media references to liberal causes as evidence that the left is just as guilty as the President and his supporters for fostering the current climate of hate.

But this argument is a red herring, thrown to try and take us off the scent of the fact that in any other civilized nation, after so many have died in so many similar circumstances, domestic terrorism committed in the name of white supremacy would be considered a national emergency—a war would be waged against those who threaten the safety of its citizens. But in today’s America, because the shooters are white, in the aftermath of every shooting, the finger of blame gets pointed at those with opposing viewpoints, and thoughts and prayers turn to grandstanding and empty rhetoric.

After the horrific terrorist attacks on 9/11 President Bush and congress approved the Patriot Act, giving the government increased power to spy on its own citizens. In order to combat inner-city violence cities like New York and Philadelphia enacted Stop and Frisk, disproportionately used against African-Americans. In 2019 where is the equivalent aimed at white domestic terrorists who commit mass murder in the name of hateful ideologies?

Ironically, the President seemed to support increased federal gun-control legislation immediately following the tragedies (before flip-flopping at the slightest pressure from the NRA). In a normal, reasonable world it would not take mass shootings by white supremacists to convince a president and Second Amendment absolutists that this is part of the necessary response to the increase in mass shootings in this country. To me, it also shows that while the President has certainly blown the dog whistle, used his voice to incite violence and enable hate to flourish in the country he claims to bring together he also sees that the more closely linked he is to these acts of domestic terrorism committed by white supremacists, the more he fears the impending political retribution.

Trump supporters have been able to ignore and attempt to justify the President’s misogyny, Islamophobia, xenophobia and racism – turned a blind eye to all his moral turpitude and point to the economy and employment rate as evidence that everything else is just a distraction.

In a normal, reasonable world, after the most recent mass shootings, those supporters would finally see the very real and life-threatening actions of a President who waters the seeds of hate-induced violence, then claims innocence, even as he focuses his sights on his next class of victims.

The problem of white supremacy is not a hoax, as Fox News Host Tucker Carlson claimed in August. The problem of racism did not end when President Obama was elected in 2008. In addition to the mass shootings committed in the name of far-right ideologies we have proof that some police officers and ICE agents hold racist and misogynistic views that makes them unfit for the positions of power they hold.

Civil wars are often the longest and most brutal. One is brewing, here in America, and its high time we admit that the greatest threat to our nation is not coming from Mexico or Latin America. It’s coming from our own citizens, emboldened by a culture of hate, created and maintained by a President and his supporters, who refuse to look in the mirror and confront the enemy.

About Nate House 14 Articles
Nate House and Mary Conway moved to Calumet Street in East Falls after living on the Delaware Bayshore for two years. Before that they lived in Philadelphia neighborhoods from the Northeast to South Philly. They teach English, Communications and Gender Studies at Community College of Philadelphia. Links to other stories about ghosts, birds, dogs and magical fish can be found at www.natehouse.wordpress.com.

Germantown behavior health specialist Lorenzo Woodson opens up about his frustrations as a black man in NW Philly, and suggests ways we can learn to interact more across racial divides. [more…]