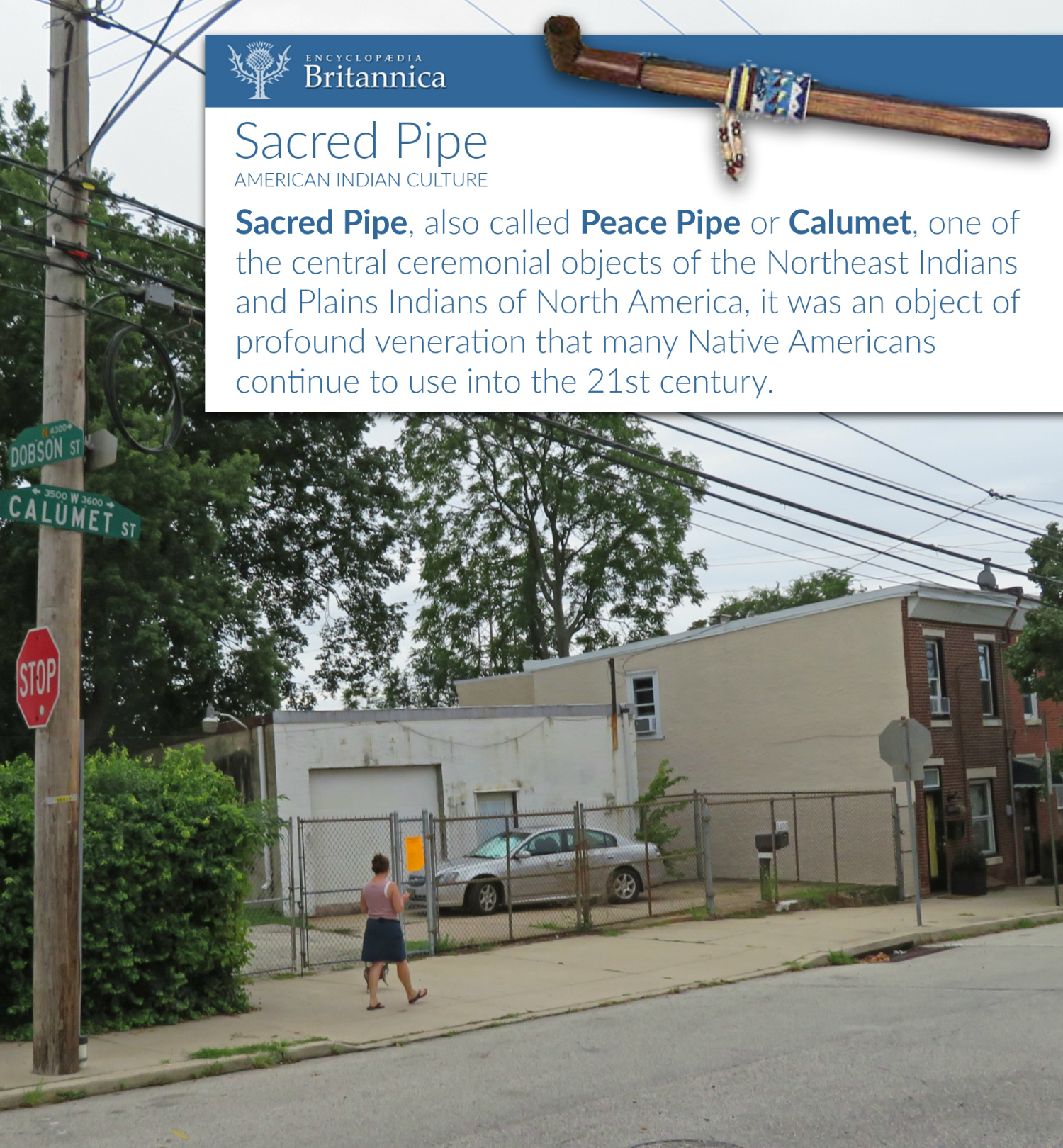 The ZBA granted this variance to build the plan as presented to the community two nights before — mostly. As was noted at the neighborhood zoning meeting, there were some slight discrepancies between the zoning refusal and the plans provided to the public.

We spoke with Fred Capp (one of the developers) who explained that Calumet isn’t a straight street, and the code reviewer mis-read the dimensions (instead of 17 feet for one point, the plan read 14 feet). When he pointed the issue out to L&I, they immediately re-issued corrected. Once updated, the code reviewer determined the project actually did have the minimum lot size required, so a variance was issued automatically.

They’ll have architectural plans for the project ready around the end of October (they close on the property October 21st). If the weather’s favorable, they hope to start building this winter.

Fun Fact: a “calumet” is a Native American ceremonial smoking apparatus — that is, a “peace pipe.”

Calumet is also a very narrow street in East Falls, lined with parked cars on both sides and, incredibly, two-way traffic for a few blocks of rowhomes between the train tracks & library. It’s about as cramped a street as you can imagine in these parts.

There are a few empty lots, though, and now perhaps one less. The development team who brought us the remarkable $699k townhouse on Sunnyside last year seeks to add five new townhomes to a parcel of land where Calumet and Dobson intersect, near Frank’s pizza. They’ll need a variance from the community, though, because the lot isn’t quite big enough according to current zoning specs (the property is zoned RSA-5, ie single family attached/semi-detached).

Just like with the Sunnyside project, these plans appear to blend the new construction in with the surrounding streetscape, in particular the traditional Philly rowhome architecture. Roof decks appear to be set back discreetly from the facade. Instead of front-loading garages, the design includes one townhouse cleverly built above a shared “thru-way” to parking in the back. Speaking of parking — the plans include six designated spots. 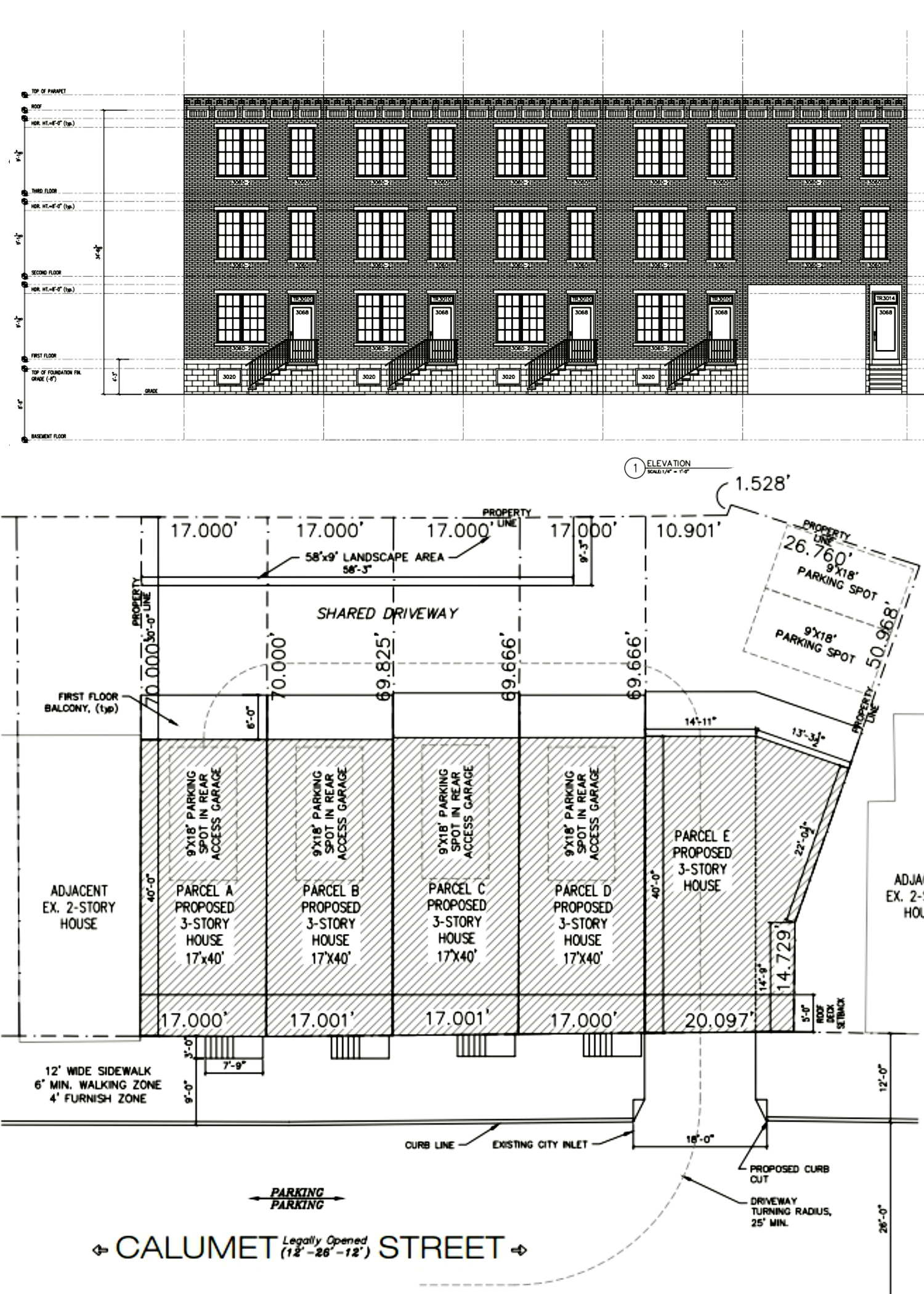 Take a closer look at the plans and other documents here. For property assessments, deeds, licenses & inspections and more, check out this lot’s Atlas listing.

And mark your calendars for an important public meeting that might be a bit of a showdown, if the Conrad Street project was any indication. Someone should bring a calumet for Calumet, just in case….

Note below: this project’s ZBA hearing is September 11th — just two days after the EFCC meeting.  Which is no problem for EFCC, who votes by special committee. EFF, however, votes democratically so this timeline provides the organization some challenges. This’ll be the second time EFCC has rushed a zoning meeting (if it happens again, we’re gonna wonder if EFCC has a problem with democratic voting…).

This is a notification of a PUBLIC MEETING to discuss the project described below:

East Falls Community Council as Coordinating RCO has scheduled a PUBLIC MEETING in advance of a public hearing to discuss the project at the following date, time and location:

For reference, contact information for all affected Registered Community Organizations and the District Councilperson is located at the bottom of this page. All neighbors welcome to attend both meetings.