Flyers went up around East Falls this week requesting neighbor input regarding new development proposed for the vacant lot at Conrad and Bowman (across from The Artist Haus). East Falls Community Council appears to be reaching out to near neighbors specifically — the meeting had not been posted on EFCC’s website or shared by their Zoning Committee chair on Nextdoor. Of course was open to the public — just like April 17th’s zoning meeting at Penn Charter, where the property owner presented plans and fielded comments/questions from the neighborhood.

Here’s what we learned earlier this month: 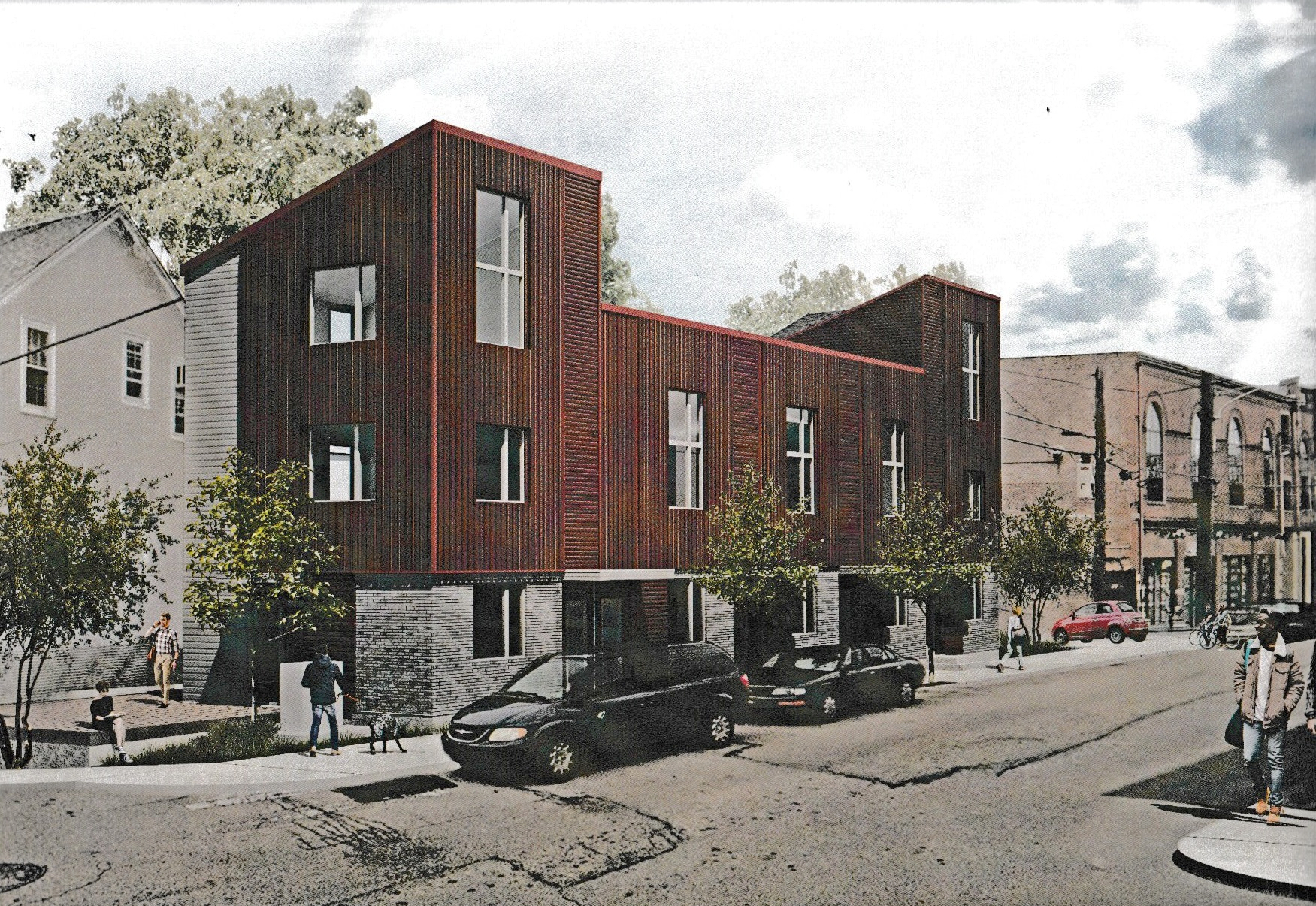 It’s a little unusual for EFCC to reach out a second time for the same project — props to the property owner Phillippe Cini for fielding heated comments and questions you can witness in the Facebook Live video. In addition, you an also watch April’s zoning meeting on Facebook Live, which includes a full review of the project plans.

Since many readers simply don’t have a spare hour to review the entire zoning presentation, we’ve tried to hit the main issues, transcribing neighbor comments whenever pertinent. The biggest issue appears to be — surprise! — parking. Neighbors currently enjoy 5 spots of “technically not legal” parking behind Sunnyside that the new construction will eliminate.

“You’re providing ten parking spaces with three extra. So if there are five cars in there now, you’ve put three back in there really. So it’s a net loss of only two spaces…  And what often happens in neighborhoods such as this the single family homes put a garage in front to accommodate their own parking and then take all the parking away off the street from anyone else, which is what happened farther up Conrad Street which was unfortunate.”

A Sunnyside neighbor, though, had a different take:

“…You can’t just plop in something gigantic with contrast to the rest of the other acidity within the community. Best as I can describe, it’s a chemistry. You start fluking around with the chemistry in our communities, it’s a flip situation. It forces another dynamic. That’s what I’m concerned about over building and shoe-horning construction that’s taken place throughout the whole community. You got this shoe-horn effect, you know, it’s absurd.

Because you see it’s all outside money, you see. And it’s overly done, it’s getting over the top. You’re changing the acidity within our community so much for profit. In the sense of working it out with L&I and the City and so forth, you know there’s another thing about this whole way about meetings and so forth. You touched up on the base upon that. And how it was kind of a low-key kind of introduction that took place. So just… It’s a good thing that we’re all here today to hear this proposal. Amen.” 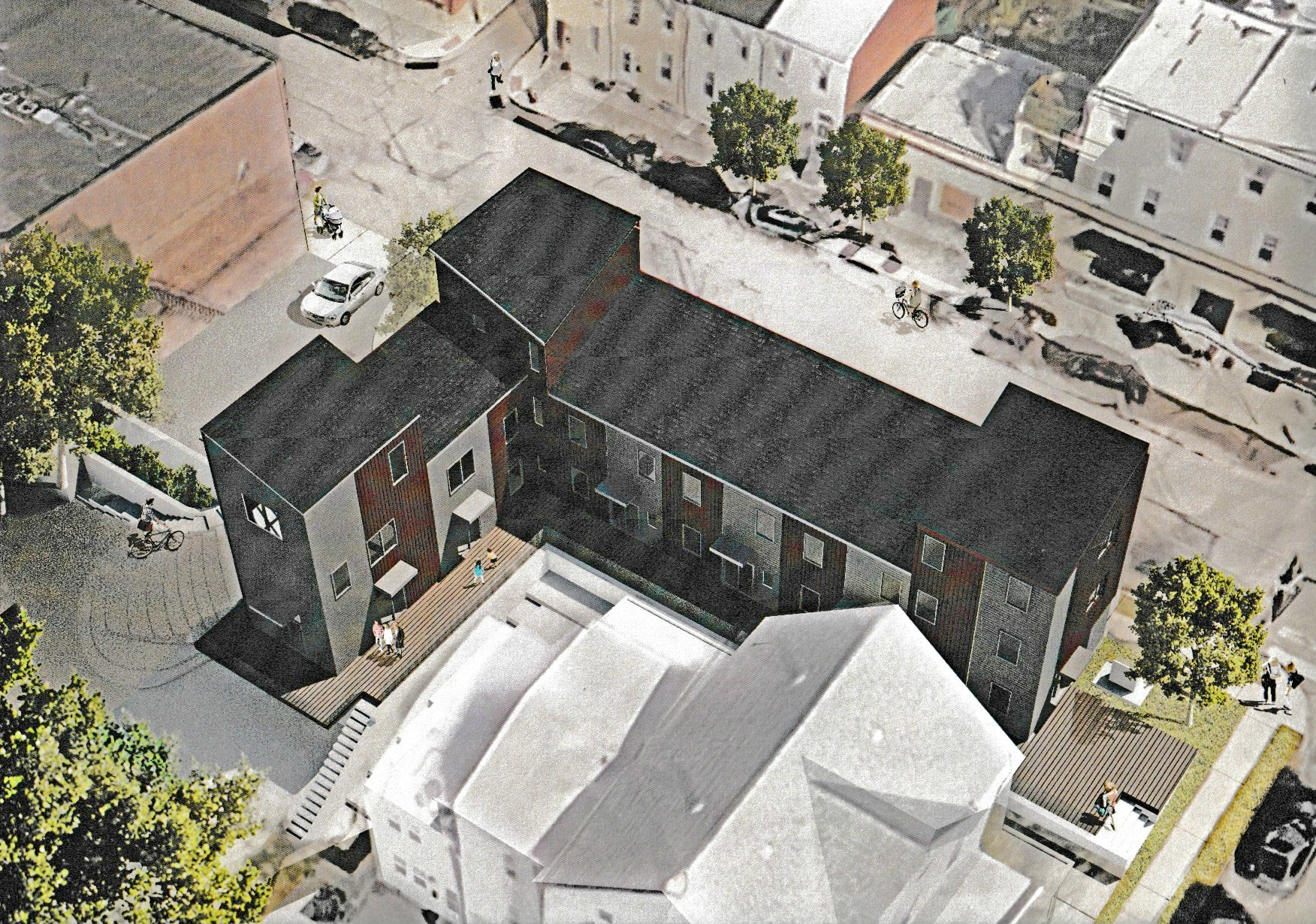 So as a neighbor we actually live across the street right now, we’re one of the four rowhomes. Much of my neighbors couldn’t be here tonight, they all work but we all really oppose this building. There are many reasons, parking obviously is the main one. But with regards to like the building itself now, like, the trash is a huge issue – the restaurant leaves trash out in the street. The dumpster is constantly overflowing, the front lawn is covered in dog feces to the point where you are… you have to move your car before you can put your kids in the car…

One thing we are aware of is the current building he charges tenants for parking. So even though the parking spots are there, the tenants don’t pay for them so what happens is they just park on our street. So regardless of the spots being offered, they don’t have to pay for them. That’s their option right? So they park on the streets. Tons of people use public transportation so…

I’m a mother of two ten month old twin boys. Imagine. I can’t find a parking spot at 10:30 on a Wednesday. So for me to come home, I have to leave my children to drive around and look for parking. And now you’re saying you’re gonna add 7 more buildings. And I’m aware you’re going to be adding parking. But are you going to charge for that?

And let’s be realistic. It’s not a one-car home these days. As much as I’d like to say that it is and that I’d love to use public transportation more and contribute that way more, a lot of people just don’t. So even if the parking is still there it’s still, say it’s a couple, there’s two cars. There’s the point already. We’re not moving forward we’re going backward.

Some folks seem very adamant there’s just no more room for any more neighbors in this area.

EFCC chair Bill Epstein implored the developer to consider including parking in his rental fees, as opposed to charging extra. However, the property owner explained that most of his residents in the neighboring building gladly pay for the convenience of parking — and any extra spots are filled by near neighbors. It’s not like empty spaces are siting vacant. UPDATE: Bill announced at the second community meeting at Franklin’s that the owner agreed to include parking in the rent.

There was also some concern that the new construction brought more renters rather than homeowners to the community. A near neighbor asked:

Why won’t you do just like regular rowhomes? Why you gotta make them units? Like actual families are gonna live there. You can do four regular houses and on the side where you’ve got the extra two you make that parking.

Another neighbor seconded that vibe, “…You’re not going to get families, I doubt very much, and East Falls is rather nice right now because it is a lot of families.”

Not everyone agreed, though. One parent on Ainslie had a very different take:

In my experience as a parent of young children I’m very much in the “young family” world in East Falls I actually do see that a lot of people that rent here end up buying here. And although I dislike rentals on my block as much as everyone else, I…. East Falls is wonderful. And I think that when people have the opportunity to rent here I think they see that they want to stay. So although I understand that this property will never be for sale, so it’s going to be a rental. And that’s just what it is. But I do see people stay around. And it leads to families. And units like these are way better than smaller units that are gonna be, you know, just students.

#1:  I am writing concerning the proposed housing being proposed for 3501 Bowman Street with connection to Conrad. We are completely against this. This neighborhood is not in need of anymore houses or apartments. We are in desperate need of parking. The new home or apartments means at least two cars. The area is over its maximum load for parking. Even when parking is provided people are not using the spots provided. This area is not in need of more housing, including homes that do not complement the existing structures.

#2: I would like to express my objection to the construction of townhomes on Conrad Street in East Falls. Regarded a significant shortage of parking area anything worse than that could result in decreased livability in the neighborhood.

A second community meeting was held at Franklin’s on Wednesday May 1st that started with a shouting match and quickly devolved into bullshit sessions around the room (with sporadic shouting/cursing/name-calling).  East Falls Forward was there, and so were to capture most of  it on Facebook Live. While EFCC’s zoning committee decides whether or not to support variances, neighbors who disagree can request a membership vote at May 13th’s general meeting.

Block captain and longtime resident Linda Norris (Division St) is leading the charge to protest this project! She’s also pledged to appeal directly to the City’s zoning board at the project’s public hearing downtown scheduled for May 22nd, 9:30 am 1515 Arch Street, Room 18-001 (appeal #36607).

It’s worth noting that the ZBA approves 70% of variance requests, often despite neighborhood opposition. RCO’s like EFF and EFCC have no real authority, they merely provide their recommendations and the Zoning Board (who is appointed by the mayor) makes the final call. Don’t like this? Let’s talk about Councilmanic Prerogative!

Plucked fresh from local socials, then peeled, pressed and salted with care by Dr. Karl, your spiritual guide for the New Year and beyond.  [more…]