The latest on the neighborhood’s two big renovations, the city’s new litter initiative, and wudder ice! 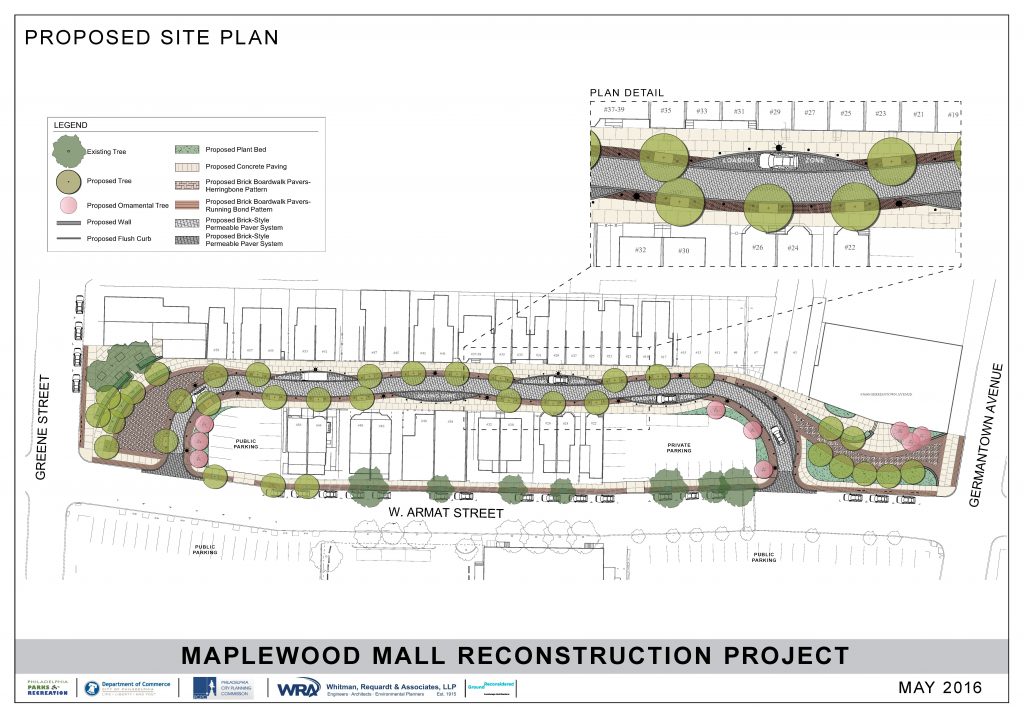 Maplewood Mall’s ren­ovation is underway, and businesses are still open on the mall despite the main roadway being ripped up and fenced off. All the trees are gone as well as most of the brick and asphalt pavers. Unfortunately, many of the tree roots were ripping up sidewalks and damaging water pipes below ground.

Maplewood Mall busi­ness owners seem excited about the project, and city planners say once it’s done, we’ll have a greener, more vibrant mall, with more trees than before and welcoming pedestrian plazas on both the Germantown Ave and Greene Street sides.

But there have been some gripes. A few neighbors have criticized not just the loss of the trees, but also of the bricks and pavers that have been a feature of the Mall since it was first designed in the ‘70s.

On the record, business owners are positive about getting a beautiful new mall, but off the record, we’ve heard a few comments about surprise water turn-offs and potentially lost foot traffic since the entire mall looks like a construction site. Germantown United CDC has put up “Yes, we’re open!” signage and sandwich boards nearby to fight that impression, but the generic boards provide no business names or info about the project itself.

At a public community meeting of city officials hosted by GUCDC at the Greene Street Friends School, there was hardly a negative comment to be heard about the project. (Most questions were about parking and litter in general around the neighborhood). After numerous visits to the Mall, this reporter could not find a single person upset about signs, art, trees, design or community engagement.

A Philly artist, Jennie Shanker, will be creating an art project as part of the redesigned mall, with one component being bricks inscribed with crowd-sourced “memories of Germantown” in the final design. Germantown Artists Roundtable organizer Paula Paul has been collaborating with Shanker to maximize creative community input. (To submit your memories for the project, you can write them into a book available to the public at the Ger­mantown Espresso Bar, 26 Maplewood Mall)

“It’s a little bit of an unknown, what will happen there in the long run,” said Paul (who is also a member of the Local’s advisory board) of the Mall’s rede­sign. “Hopefully it will look really nice and we’ll all be really happy.”

Paula has known the Mall since it was first developed in the 1970s. She hopes that giving the area a facelift will increase foot-traffic and economic activity while encouraging neighbors to use the mall as a meeting space, but shared concerns that the mall will now allow cars, and even new trees will take years to reach the height of the ones that were cut down.

“Many of us loved the Weeping Willow trees on Maplewood Mall very much. Even though they had to do it, it meant something to us,” Paul said. “Some people loved the bricks, saved some of them and created memo­rials to them.”

Paula identified some of these reactions as arising from “concerns about con­tinuity and discomfort with gentrification and a desire to keep the neighborhood what it once was.”

“This is common because when people repair or improve or modernize, I don’t think they have enough respect for what people might be losing,” she said.

In other big news: the city’s renovation of the Chelten & Greene transit plaza is scheduled to begin this March. Plans call for a larger plaza with more room for people and buses, more seating, lighting, bike racks, new trees, new sidewalks and a new bus shelter, all intended to serve as a wel­coming entrance to Vernon Park from Chelten Ave. In the meantime, the existing plaza will be ripped up, and you should say bye-bye to the trees currently standing there before they’re gone.

Keep an eye peeled for the Streets Department street sweepers and be sure to give them a big thumbs up!

Rita’s Is Saved!
You may have seen the eviction notice on the Wayne Avenue Rita’s Water Ice recently, or read about it in last month’s Local. However, as we mentioned, there was still hope, as a party to the underlying legal matter appeared to be the owner of a Rita’s out in the ‘burbs. Now the eviction notice is gone, and with that settled, we’re declaring victory.

Rita’s HQ never responded to us, but it looks like a new franchise owner may be taking over. As long as those sweet sweet Rita’s are available on the first day of spring (Thursday, March 19), we’re good!

Signage for Maplewood Mall construction might be muted but it speaks volumes. [more…]

Development and business news from around Germantown [more…]