A second win for Murphy’s or a reprint of an article from 2017? 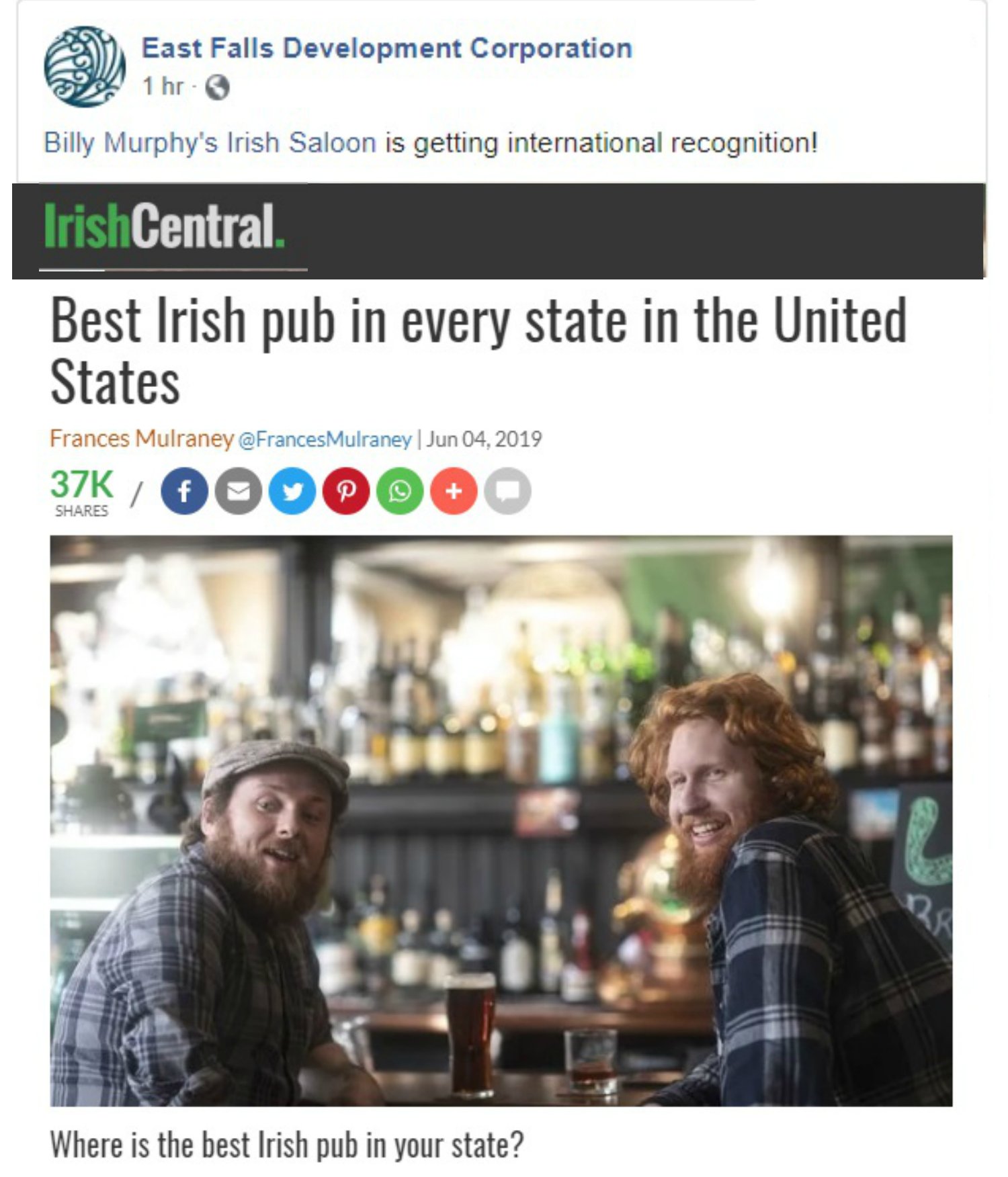 When we started seeing posts about a certain local watering hole’s recent nod from a national website, we recognized IrishCentral.com from an article we wrote in 2017 about Murphy’s being named our states best Irish pub. So is the 2019 article another win?

Not really. Seems the 2017 article’s old url gets re-directed to the new one. Same info, no new mentions. But big deal. Murphy’s still stands as the best Irish bar you can find round these parts.

And it’s a great neighborhood bar, too. Legendary, even — this article’s a litany of accolades for this welcoming spot in the heart of the “lower” Falls: BuzzFeed, NBC, Playboy… (Irishcentral.com, who?)

The way communities are changing lately, you won’t find many old joints like this one that’s managed to hold onto its center while still adapting to the times. Get in here and make like a local. Order a Turf Burger — try the seitan wings! Say hi to some good people and for godsakes don’t try to play Bon Jovi on the juke box. Just don’t. Few would argue that Irish drinking establishments hold a certain cachet for connoisseurs of good times — every year, it seems another “Best Irish Pubs” list shows up with new contenders.

This year, IrishCentral.com scouted their top picks across the country, and named our neighbhorhood’s reigning champion: Billy Murphy Irish Saloonery, as the Number One Irish Bar in our state. Exactly NO ONE is suprised…

So this makes NBC, Philly.com, Buzzfeed, Playboy (see below), and now Irish Central in the two years we’ve been covering East Falls. Congratulations to Mike Murphy and his mom, who deserve all the good buzz they get.

** 2-29-16 UPDATE:  Philly.com hops on the Billy Murphy’s bandwagon with a featured article about the history and longevity of this favorite local watering hole for almost 40 years! 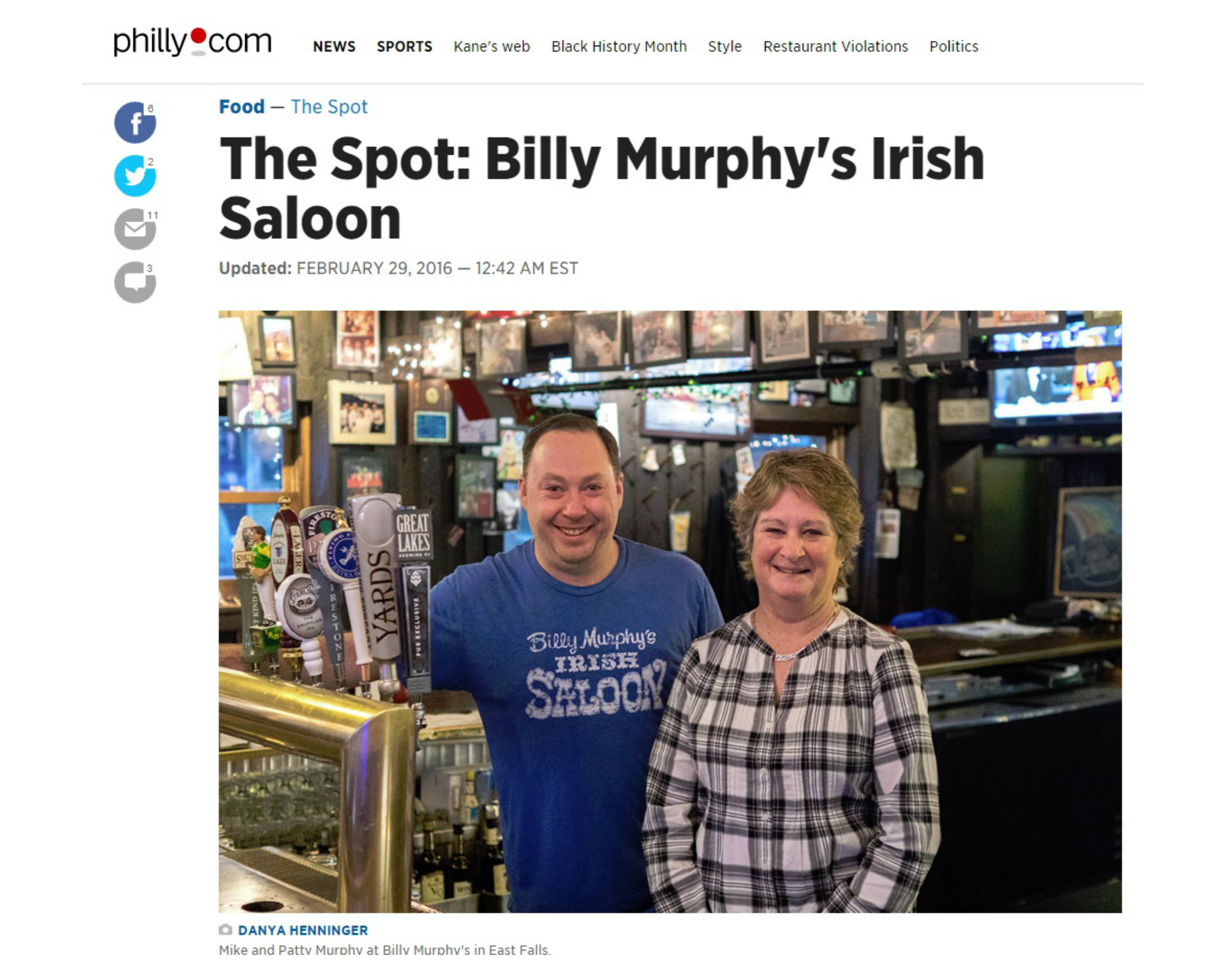 Before 1977, the bar at the corner of Conrad & Indian Queen Lane in East Falls had an old ski-lodge theme, with resort signs and skis up on the walls. Billy and Patty Murphy sold their car & doubled down on mortgages to buy the place: with the Luck of the Irish (and a lot of hard work), they created a beloved neighborhood hub.

Decades later, Billy Murphy‘s continues to bond locals with gourmet pub food and ten taps (plus cask!) offering a rotating selection of cool brews, both trendy and classic. Philly.com foodie Danya Henniger stopped by The Saloonery recently for the secret to this “dive” bar’s success.

In short:  a community spirit — where people from all walks of life can feel welcome — and generous portions of good, filling food.  Back in the day, a lot of Billy Murphy’s clientele came from nearby MCP as well as the many factories in the area. Today, the bar serves a new wave of young families and professionals who appreciate East Falls’ suburban feel just minutes from Center City.

The internet has, largely, been good to Billy Murphy’s. Fantastic Yelp reviews lure folks from all over the area — and a recent Buzzfeed article named this corner bar the Best Irish Pub in all of Pennsyvlania! (read below) 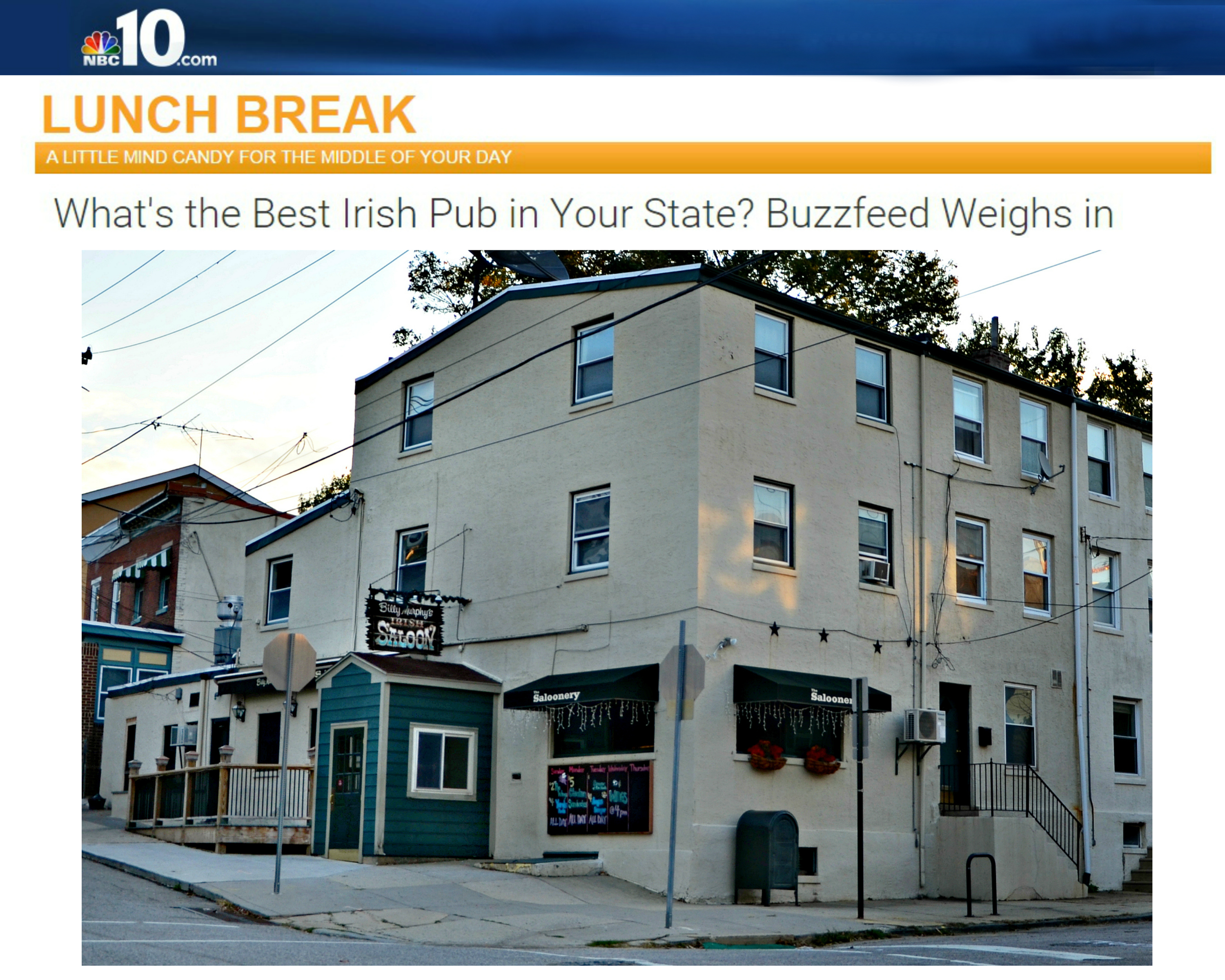 Two words came to mind when we read the hubbub about Billy Murphy’s on NBCPhiladelphia.com:  well duh!

It’s no secret that we love us some Murphy’s. You could say the place is like a second office to us — we’re always meeting people there for interviews, and quite a few interesting deals & plans have been hatched upon their bar stools. We been known to obsess over their wings, too… 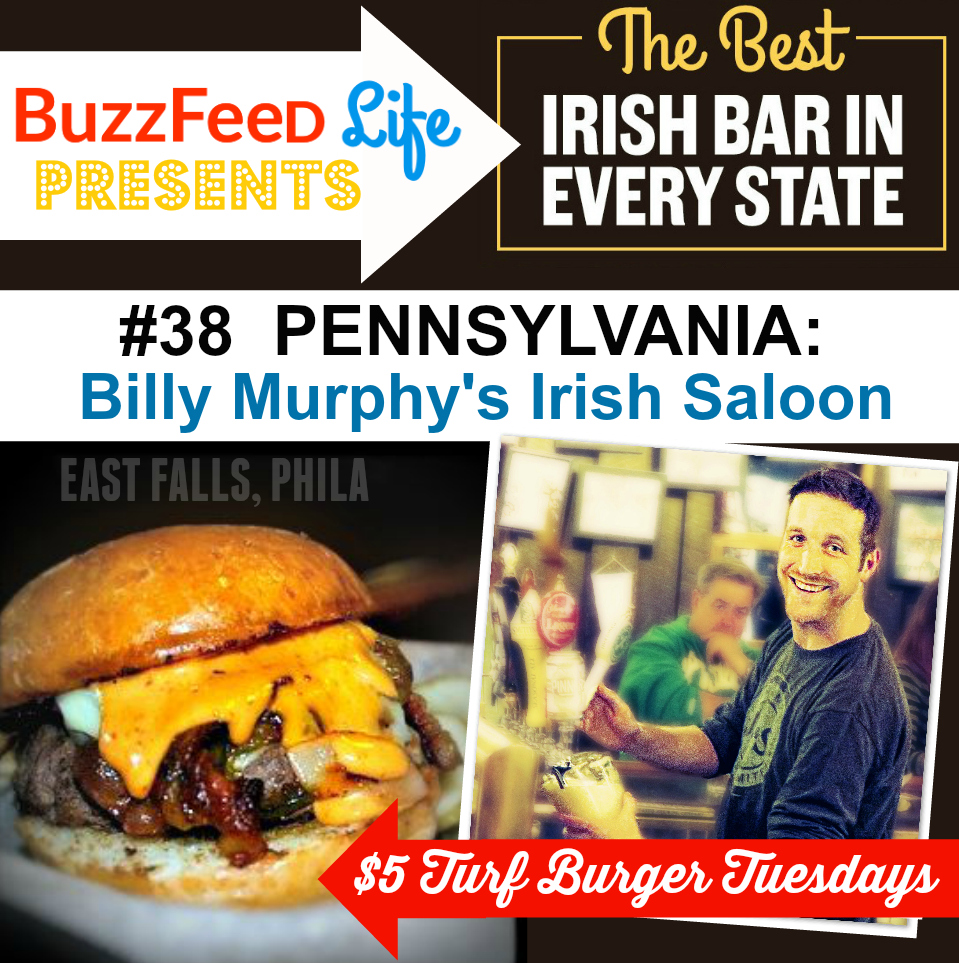 So we haven’t been surprised about all the attention being heaped on our little watering hole lately — in fact, we’re kind baffled it’s taken so long for Philly to wake up to our awesome drinking options here.

Between Murphy’s and Cranky Joe’s across the street, this corner of Conrad & Indian Queen provides a near-perfect sampling of neighborhood demographics — perhaps a little light on the “uppers,” but pretty much everyone who lives in a (non-historically-designated, ha) rowhome pings this area with some regularity. Fantastic place to catch up with the locals. 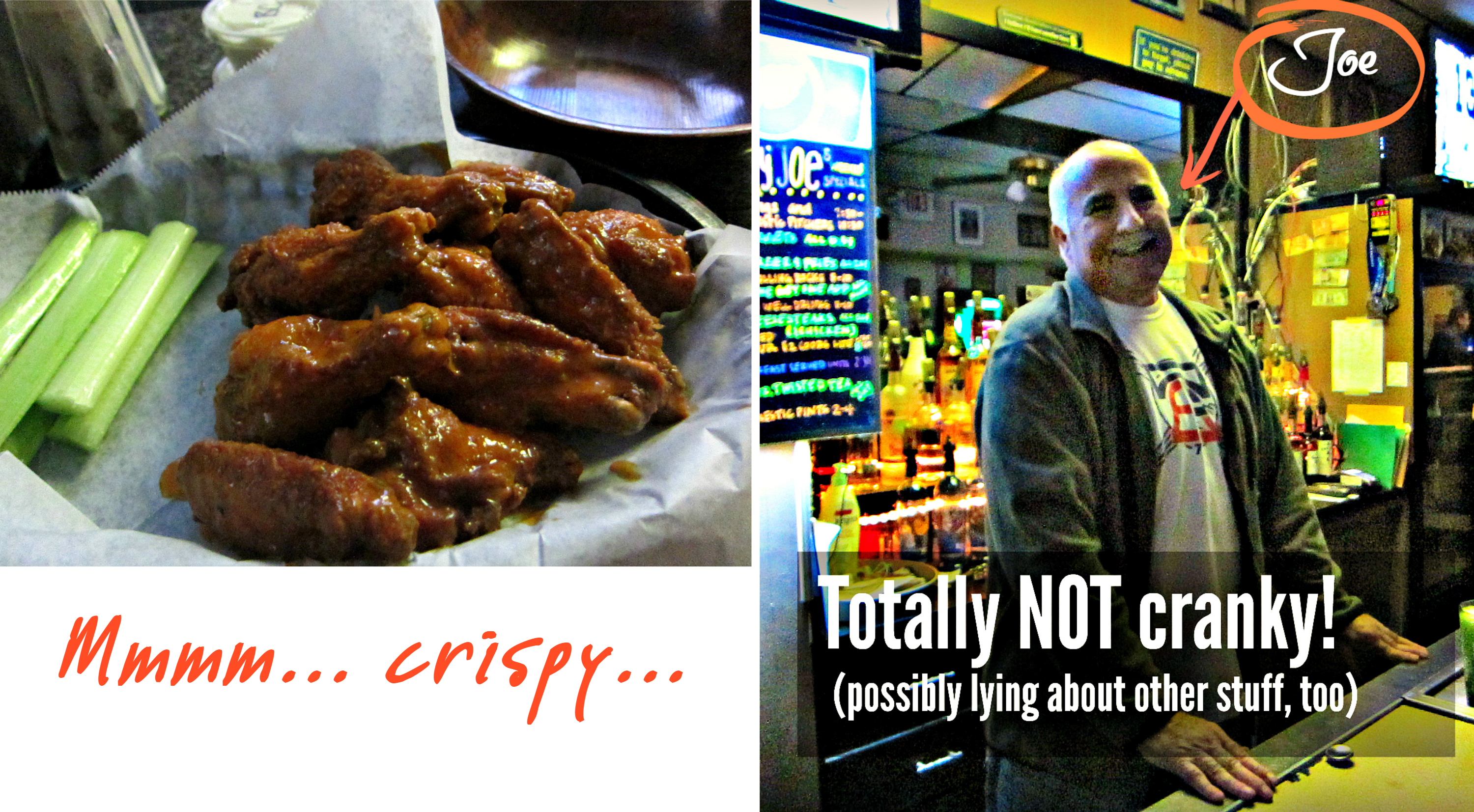 It’s not just for the socializing, either. If crispy-sauced buffalo wings are your thing, you must try Cranky Joe’s — catercorner from Murph’s (don’t worry, they’re friends!). Damn they sizzle those babies just right for me, and sear the sauce into the skin somehow.

And the “Turfburger,” whoa! A burger topped with fried onions, jalapeno peppers, bacon, chipotle aioli and American cheese — named after former bartender Ryan Overturf who concocted it one night messing around in the kitchen. Mike Murphy says it was dumb luck, but “Overturf will tell you he’s a freakin’ creative genius.”  Taste for yourself for just five bucks every Tuesday (be sure to check our calendar for other weekly specials here & around East Falls).

Speaking of bartenders — some real characters work at Murphy’s. No matter who’s on shift, you’ll be warmly attended, unless they know you in which case they’ll mess with you, and then:  CONGRATULATIONS, you’re a local!  BTW, keep your eye out for Jon, quite a fascinating dude if you can get him talking (not really a challenge unless they’re way busy). 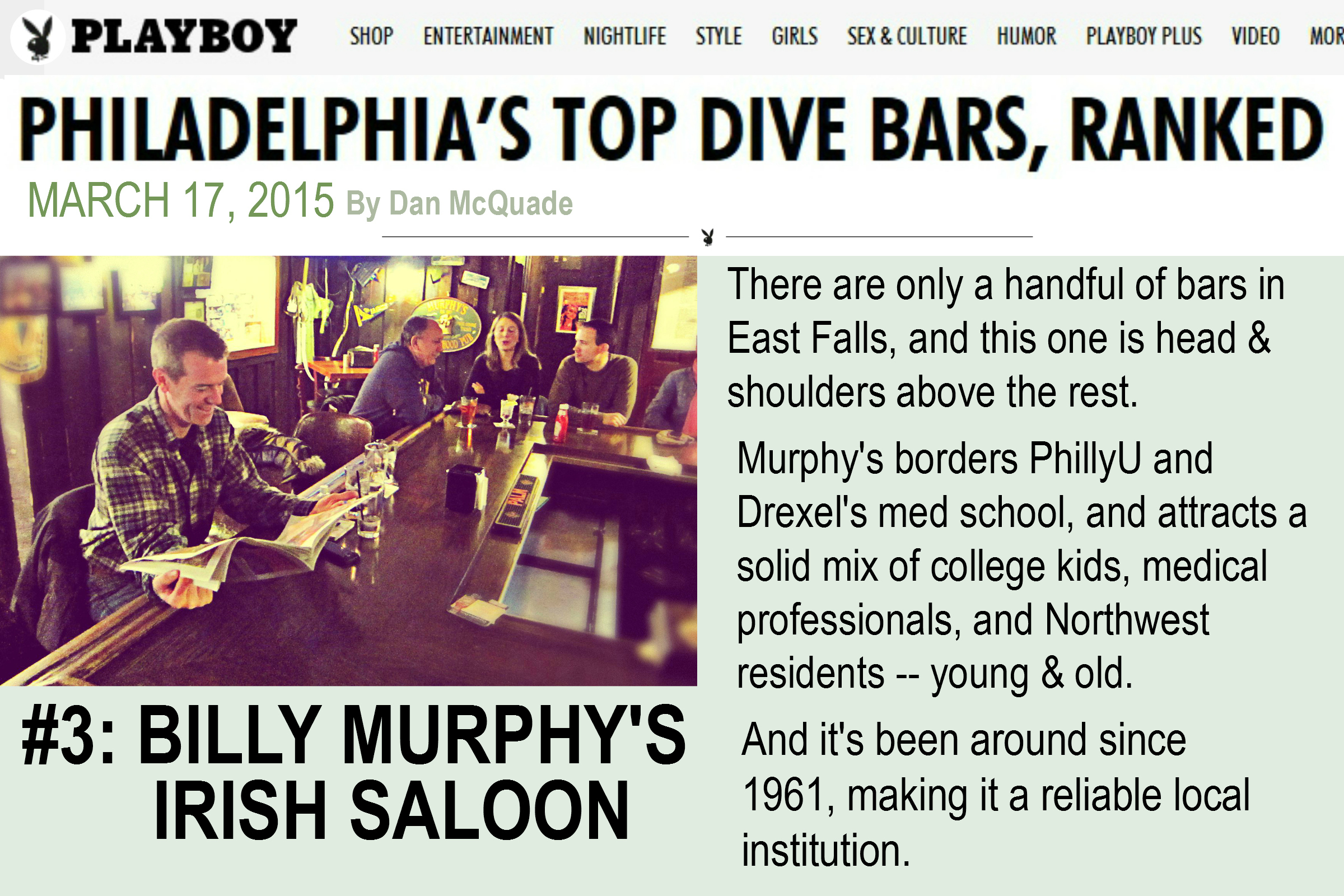 Buzzfeed’s not the first to spotlight the awesomeness that is Murphy’s, either. Last year, Playboy named Murph’s third best dive bar in Philly (which made local news in 2015). Glowing reviews on Yelp, a wildly popular Quizzo night, and over five decades of local history. Oh if these walls could talk…

Come to think, they kinda can, thanks to the gazillions of photos plastered everywhere. Mike Murphy’s actually the second Murphy at the taps — his father, Billy Murphy, was a local giant who created a neighborhood hub out of what was once just a place to get beer. Mike carries on the tradition (doesn’t hurt that he’s the spitting image). 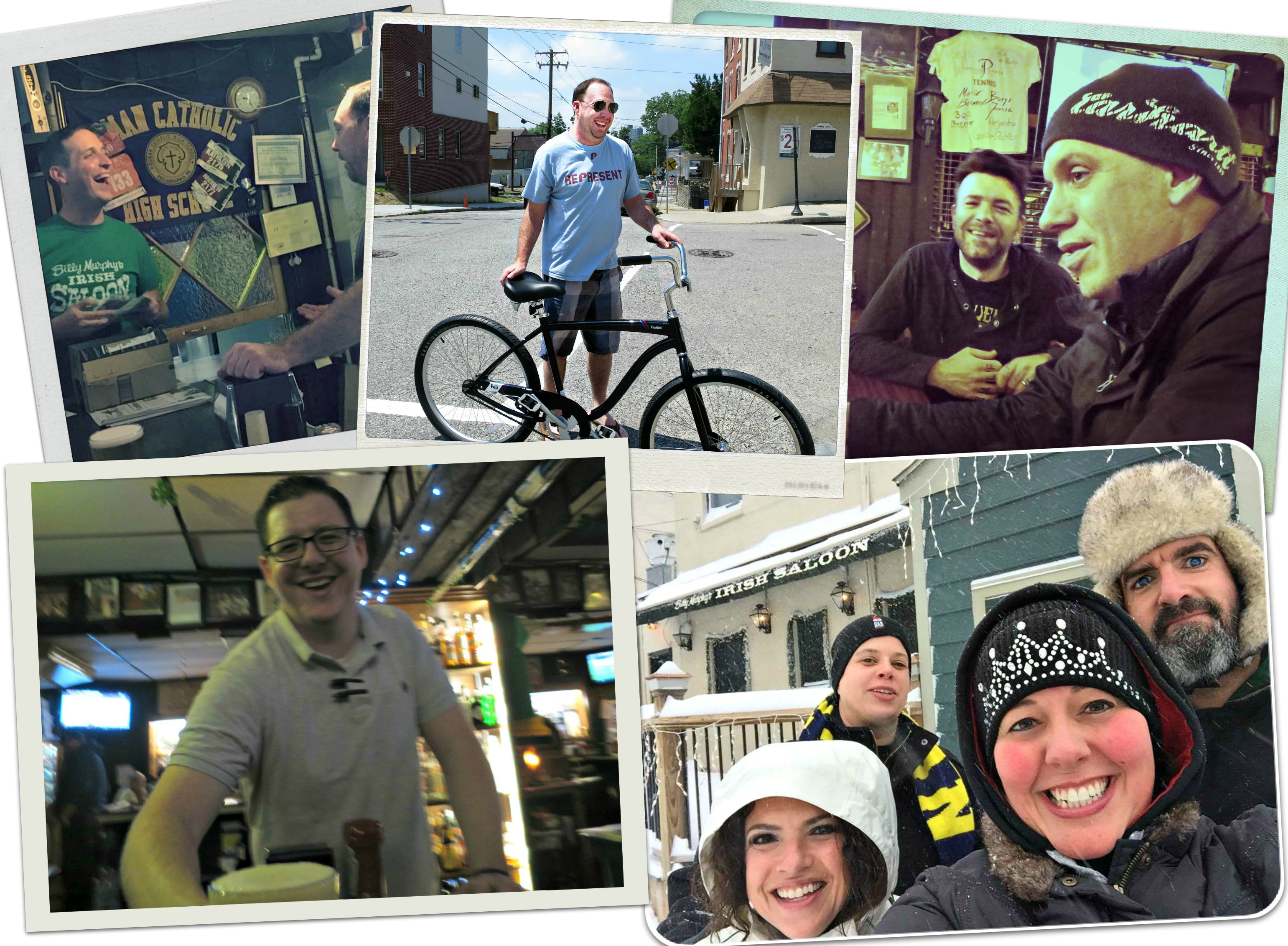 Mike takes his success in stride, crediting his staff and making light of all different hats he wears to keep the place running.

We’re just happy to have him here.  Congrats, Billy Murphy’s — thank you for adding your special mix of coolness to East Falls.  Delighted, we are, to sing your praises:

LINK to article on Philly.com

Pizza Is Always the Answer

In a post-election world, Pizza Ninja grapples with important questions in his review of the new FOUNDED, a pizza-slash-coffee spot where Chestnut Hill Coffee used to be. [more…]

Supreme Court is not so nonpartisan after all. [more…]