I was just sitting down to a bowl of Honey Nut Cheerios (whoops I mean kale salad & spring water) when my Inbox pinged with news of a “Found” dog on Bowman.

East Falls has an extremely dedicated, responsive network of “dog people” on the dog park’s Facebook page.  It’s a closed group, but as a member I logged in & forwarded Richard Gardner’s information along. 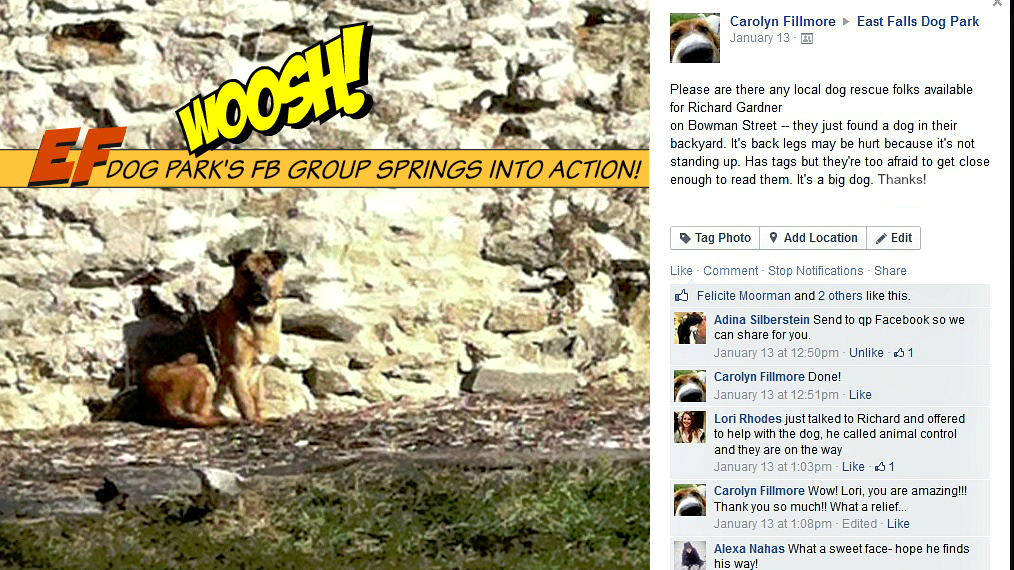 Within minutes, literally, the mystery mutt’s photo & stats started spreading on social media! A member of the Dog Park Group, Lori Rhodes, happened to live just two doors down, so she checked in on him & brought treats while the family waited to ACCT for arrive & remove him.

Hours passed. As the sun went down, temperatures dropped. The dog was tired, cold, done.  Seemed a race between the dog catchers and the rescuers, who scrambled to wrap up the work day as early as possible. 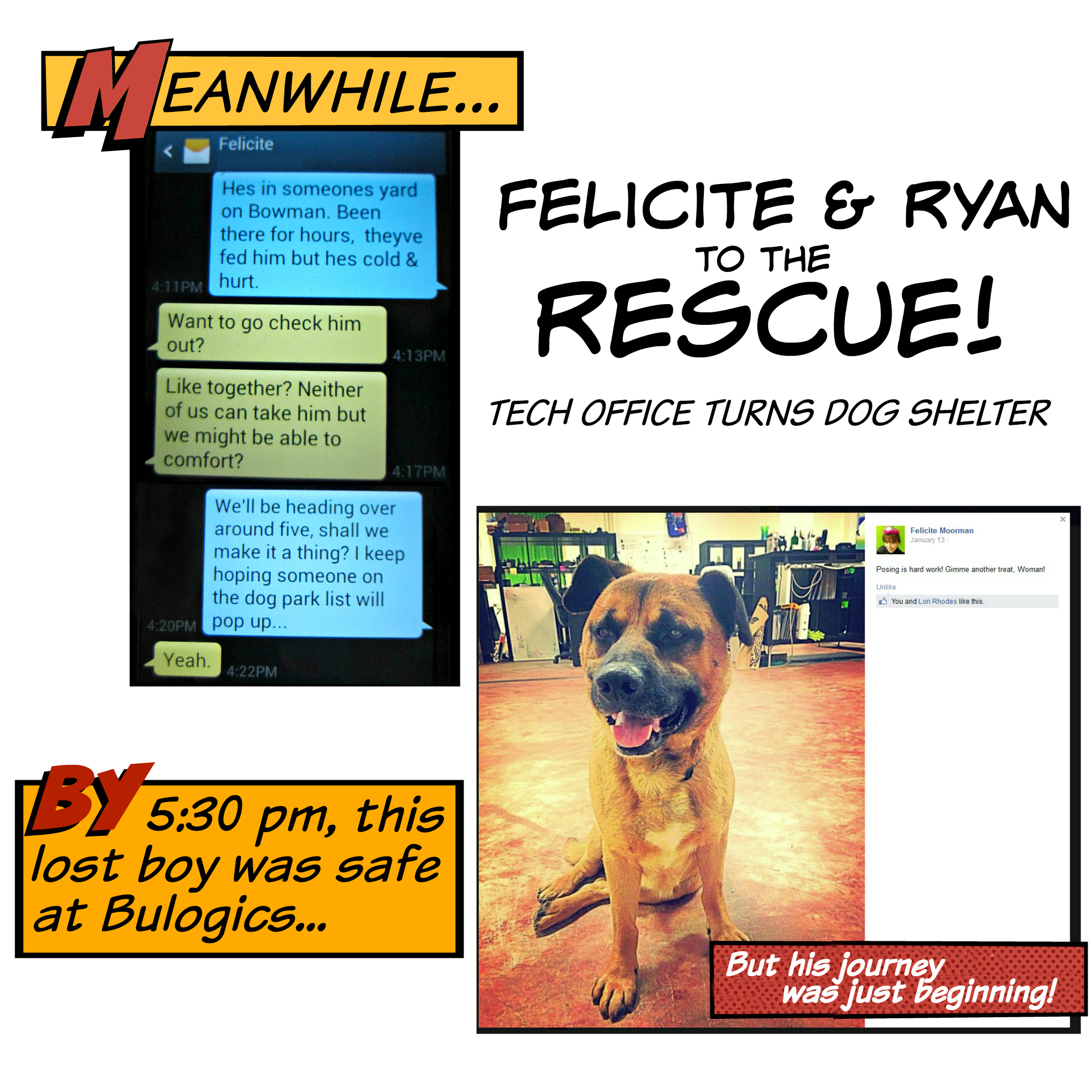 Around 4PM, my phone buzzed:  Felicite from BuLogics (and homeowner from our EastFallsHouse.com blog), who was home on a brief respite from a marathon month of tech shows and industry hobnobbing.  She couldn’t fathom how she could help, but she was game to try — at the very least, he’d get some love & comfort while we figured out what to do.

But by the time 5PM rolled around, Felicite had pulled colleague Ryan Buchert into the rescue:  together, we were gonna get this dog into an SUV and down to their electronics-loaded office on Ridge & Midvale, where we’d pull resources and form a better plan. 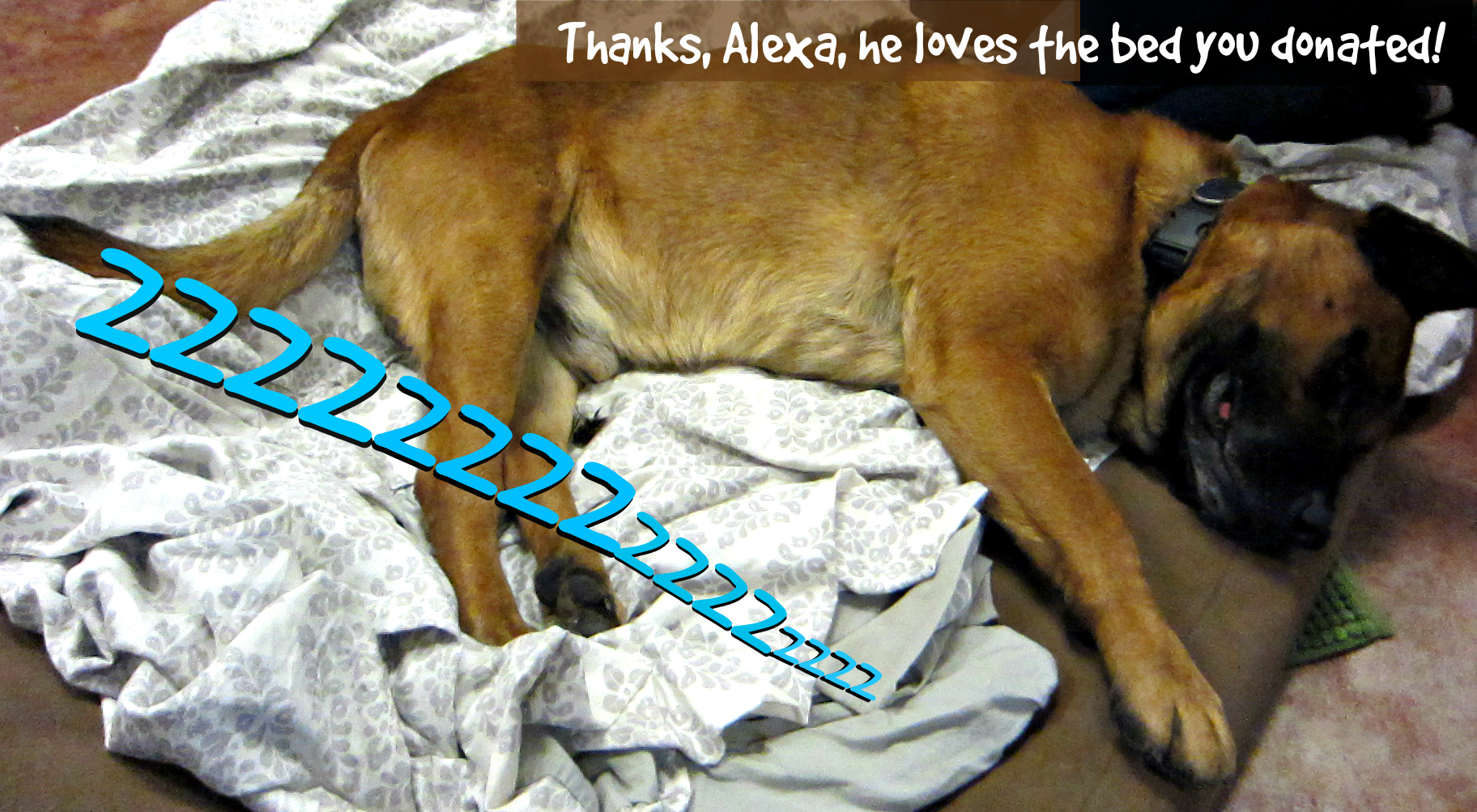 And so, a stressed, injured, road-rough dog was somehow welcomed into the last place on earth you’d want to test an animal’s housebreaking control. Workers found bowls, towels, food. Another Dog Park group member, Alexa Nahas, donated a smushy dog bed so he didn’t have to lie on the cold floor.

As the dog’s body warmed up, he seemed more uncomfortable — maybe the cold, at least, had kept him numb to his twisted back leg & swollen abscess. He had a place to stay for the night, but clearly medical intervention would be necessary. The sooner the better.

Out of the blue, a visitor who’d been following our boy’s saga on Facebook:  she and her husband love dogs, and wanted to help. She gave us a great vet recommendation (Dr. Patten lives in East Falls — represent!) and put down a credit card to cover anything over the initial exam & x-rays, which Dr. Patten waived, by the way.  Such incredible generosity, for this guy! 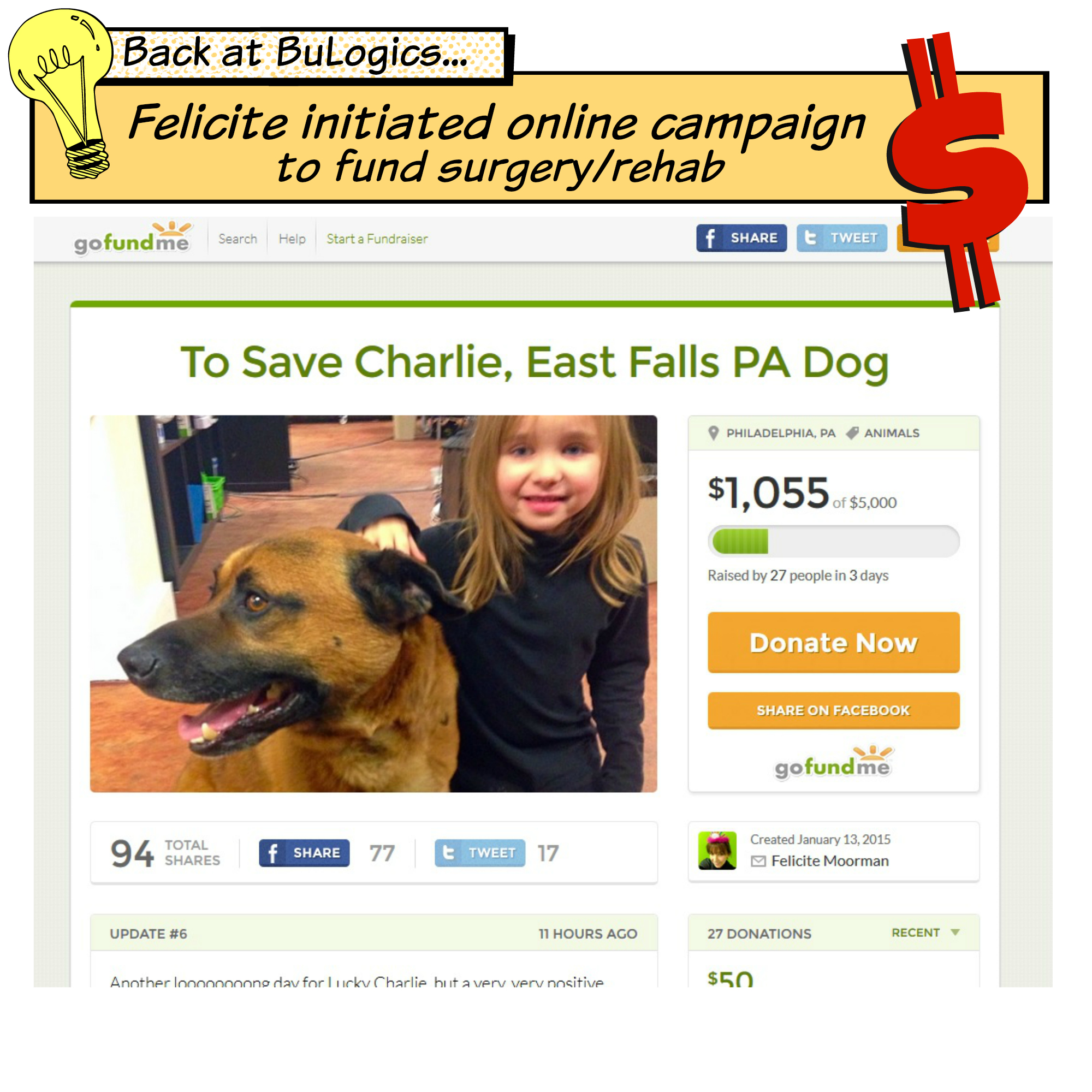 Once our boy’s plan for vet care was set, Felicite set up a GoFundMe account to start raising money for his rescue & recovery (the name “Charlie,” by the way, is from the movie “All Dogs Go to Heaven“).  Neighbors chipped in twenty bucks here, fifty bucks there… East Fallsers,  happy to help in any way. 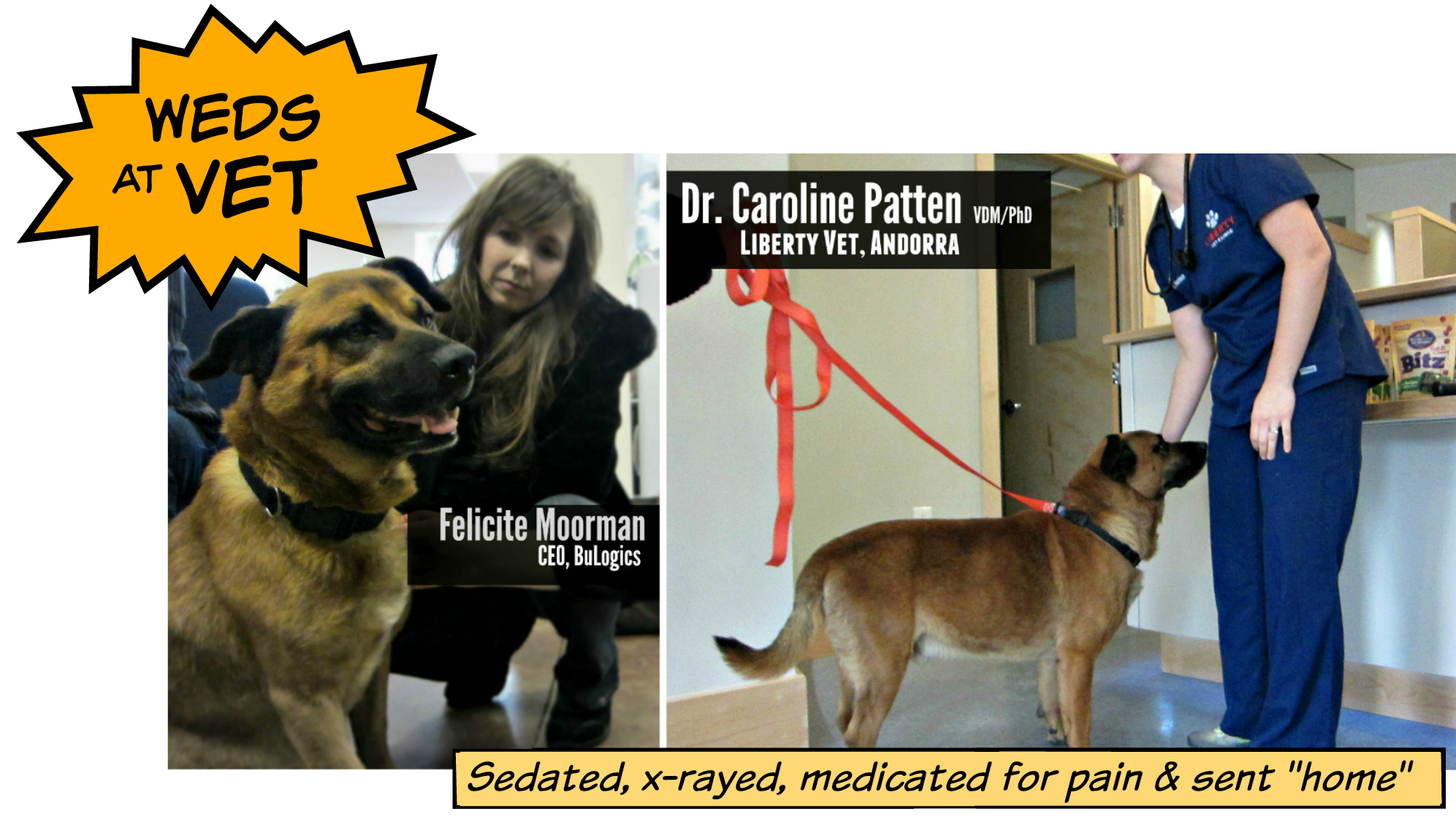 His first night was a rough one —  every time Ryan started to nod off to sleep, the dog would nudge him for reassurance, waking him up again. The next day at the vet, he was promptly sedated, x-rayed and medicated for both pain & infection.

The good news:  nothing was broken! The bad news:  his dislocated hip had gone untreated so long, surgery would likely be required to return function to the limb & stop the progress of any more nerve/tissue/bone damage. 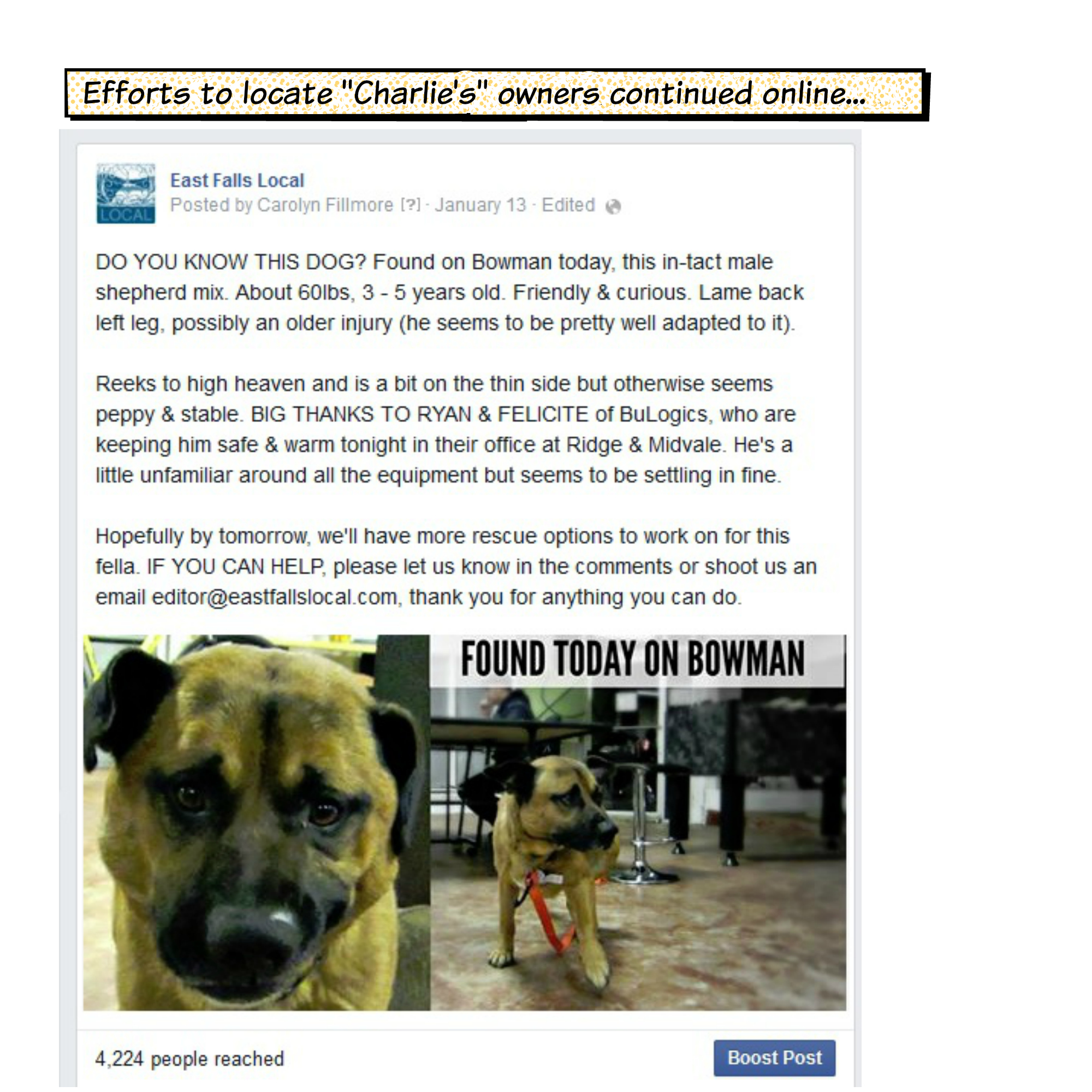 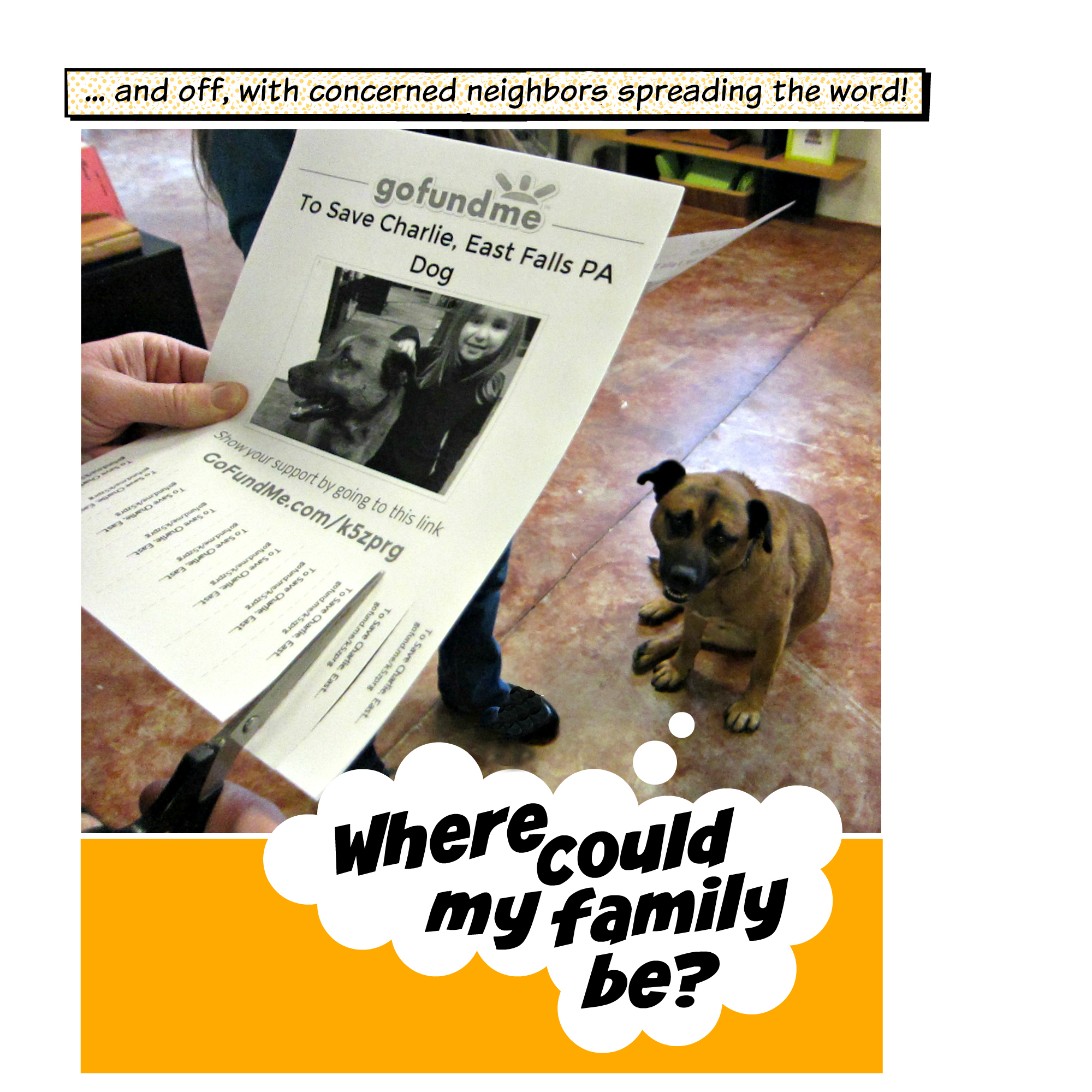 Meanwhile, everyone continued to circulate “Charlie’s” photos and information as best as possible. 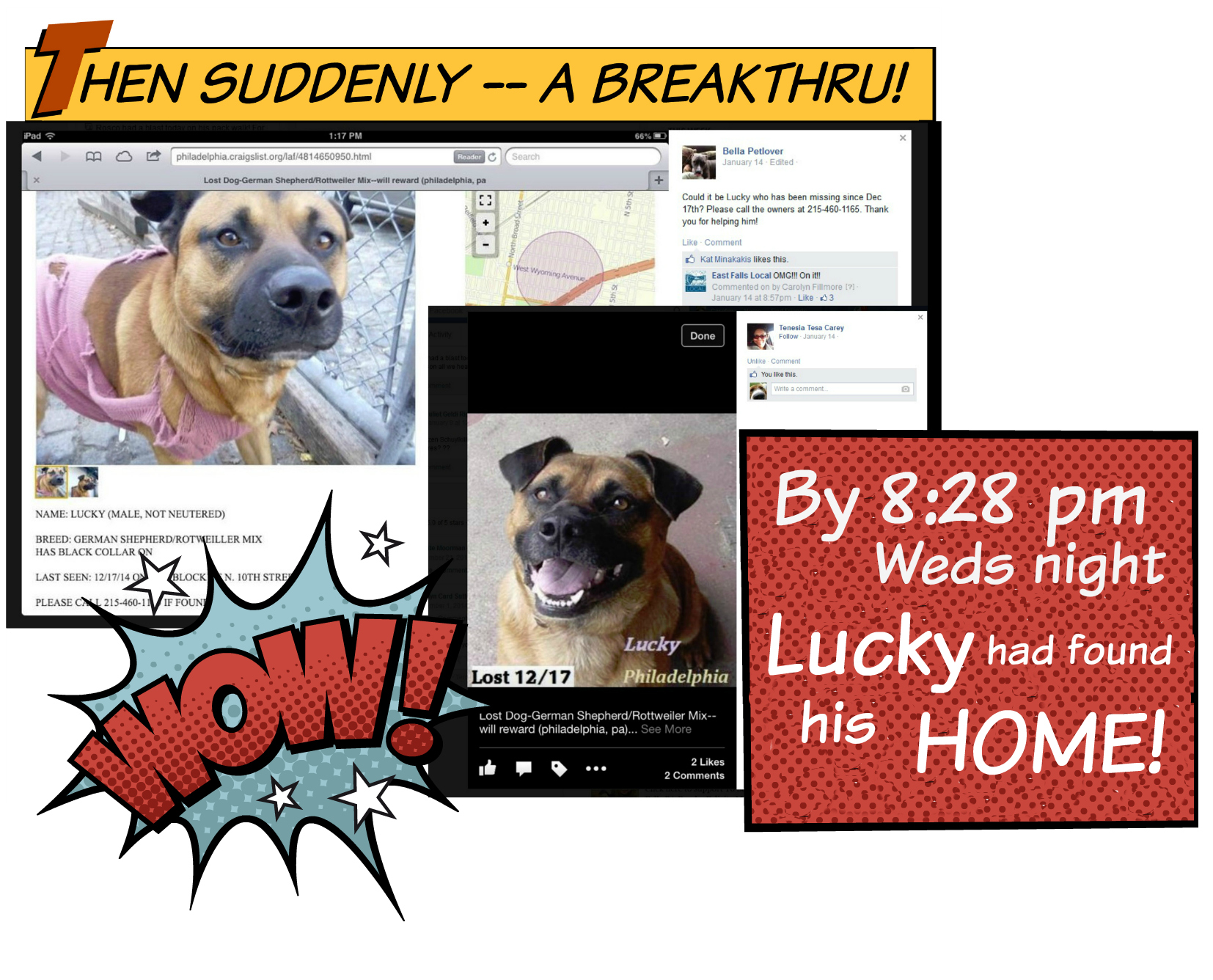 One of our posts got a message — a Craig’s List link showing a lost dog that looked just. like. Charlie. Could it be? In minutes, another message with different photos. Still looked like Charlie! And then another message. And another.  Before long, Felicite was on the phone with the owner, making plans for a Friday reunion.

AWWWW ALERT:  To us, Lucky’s initial reaction shows pretty much the same degree of enthusiasm he’s greeted all the well-wishers who’ve been by to love on him. But then after a few good sniffs at their feet, he suddenly realizes:  “OH WAIT! MY PEOPLE!!” and then he kicks it into high gear:  whap, whap, whap goes his tail, and he wobbles on his three good feet to stay near them.

Three came for him: a mother, father & daughter — but Lucky’s obviously a momma’s boy. After greeting him, she looked over his wobbly back end, his dangling hind leg, and quietly cried into his fur. 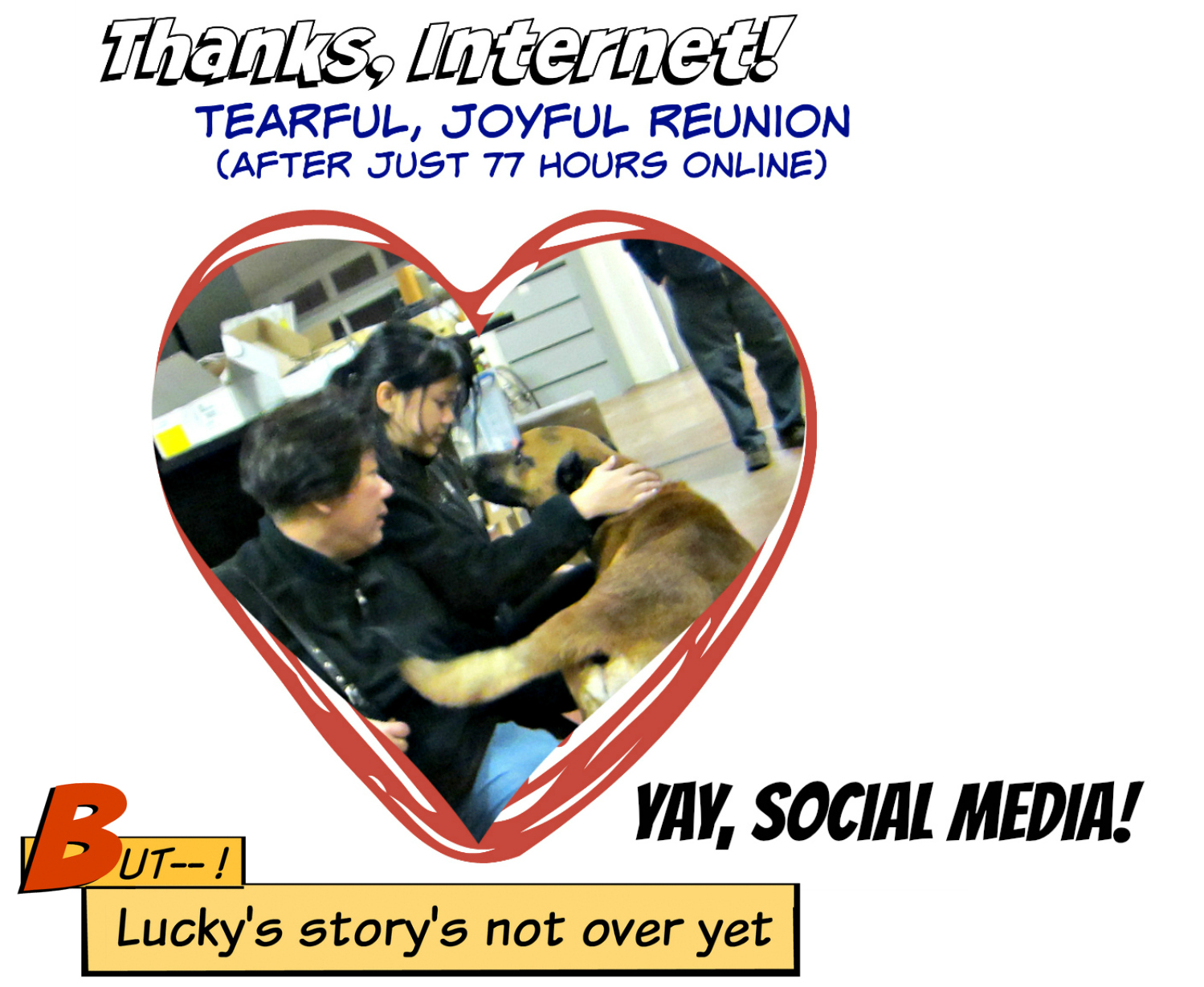 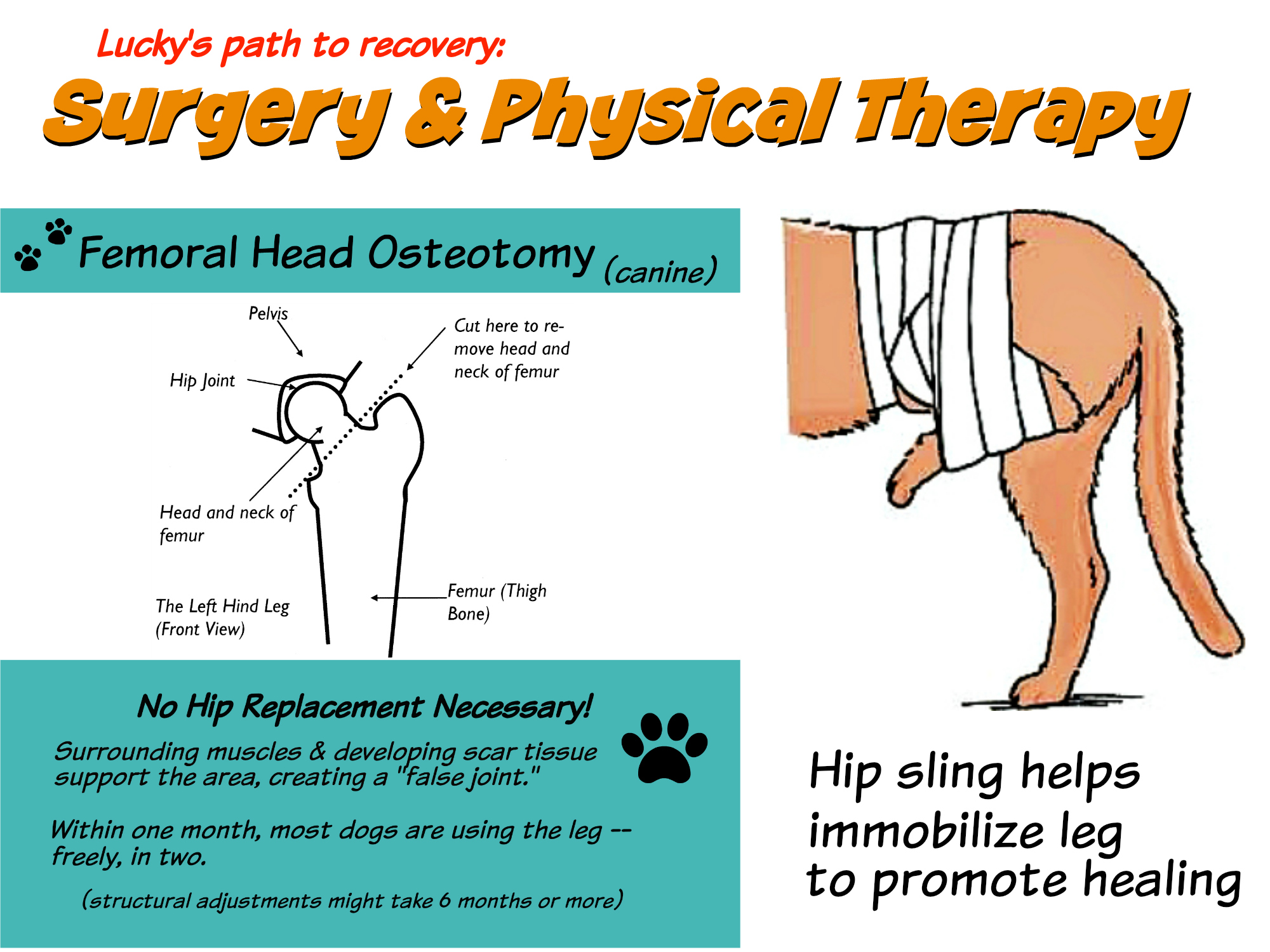 Lucky may have a rough road ahead of him, but he’s not alone. East Falls locals came to his aid when he was lost, and continue to support him through this ordeal. Felicite & Ryan coordinate his care and rehab, remaining in close touch with Lucky’s owners from now until he’s ready to go back to his busy home with pets & kids. Lori  and other Dog Park Group members come by to walk, water & just hang out with him. You can, too!

TO HELP LUCKY: email your info to editor@EastFallsLocal.com and let us know if you can donate food or toys or time! Ideally, Lucky could use a foster home with carpeted floors and no stairs but he’s extremely adaptable, so if you’ve got a warm safe room to spare for this miracle guy, please let us know.

(and please don’t forget about his GoFundMe — though rates quoted are discounted for rescue, he’s still looking at a few thousand dollars of vet bills before this is all behind him)

THANK YOU FOR YOUR INTEREST IN LUCKY’S STORY!   We’re thrilled to witness yet another example of good deeds through social media. Let’s keep the effort going so we can bring Lucky back home as soon as possible. 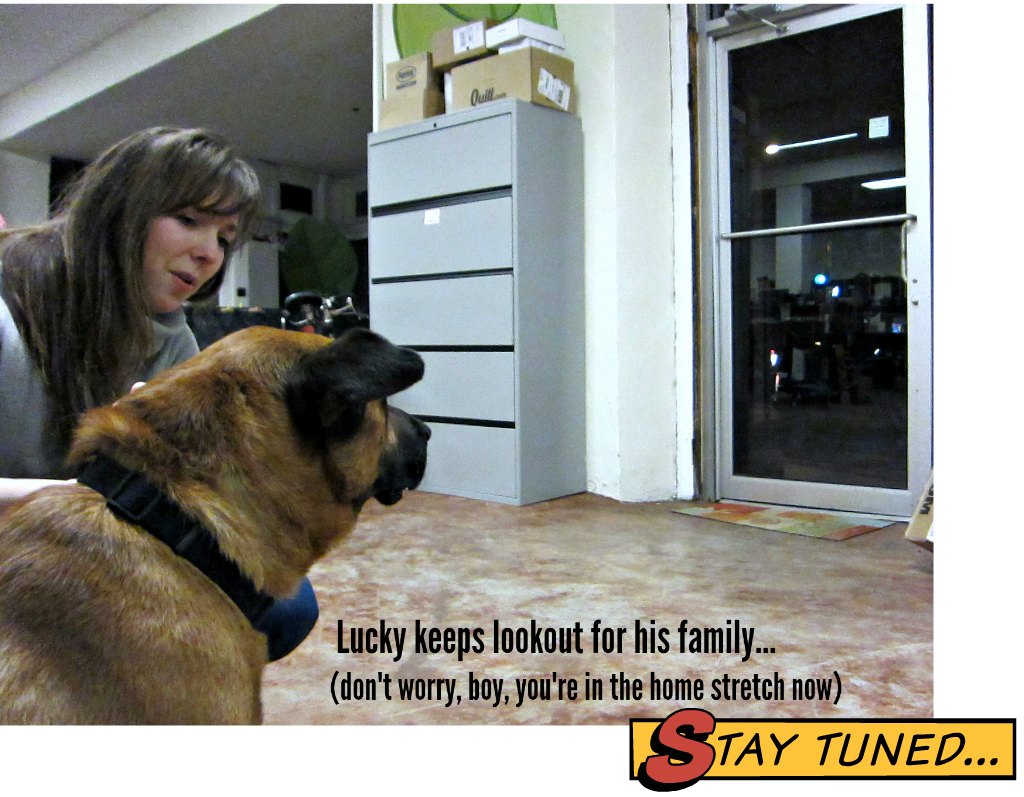 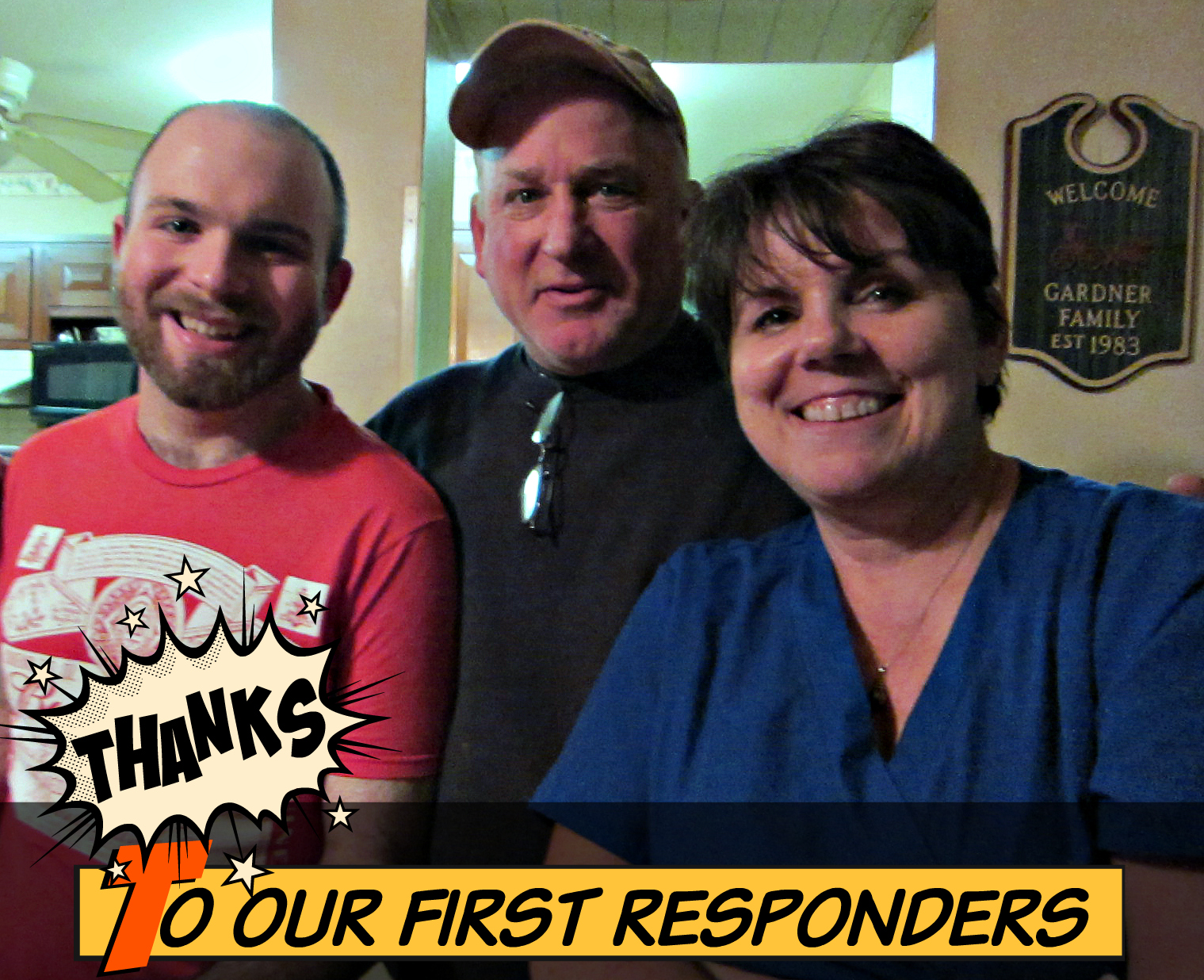 Big thanks to the Gardners on Bowman Street: dad Rich, mom Pat & son Richie who first emailed us last Tuesday afternoon.  Instead of just calling someone & shutting their door, they reached out & invited us all in — ultimately getting Lucky the help he needed.

To the world they might just be good neighbors, but to Lucky and his family (and to us), they’re heroes.  If you see these guys on the street, give ’em a shout out from Lucky’s team in East Falls.

UPDATE 2-16-15:  LUCKY’S ADVENTURE ENDED ON A HIGH NOTE!  CLICK FOR ALL THE EXCITING DETAILS 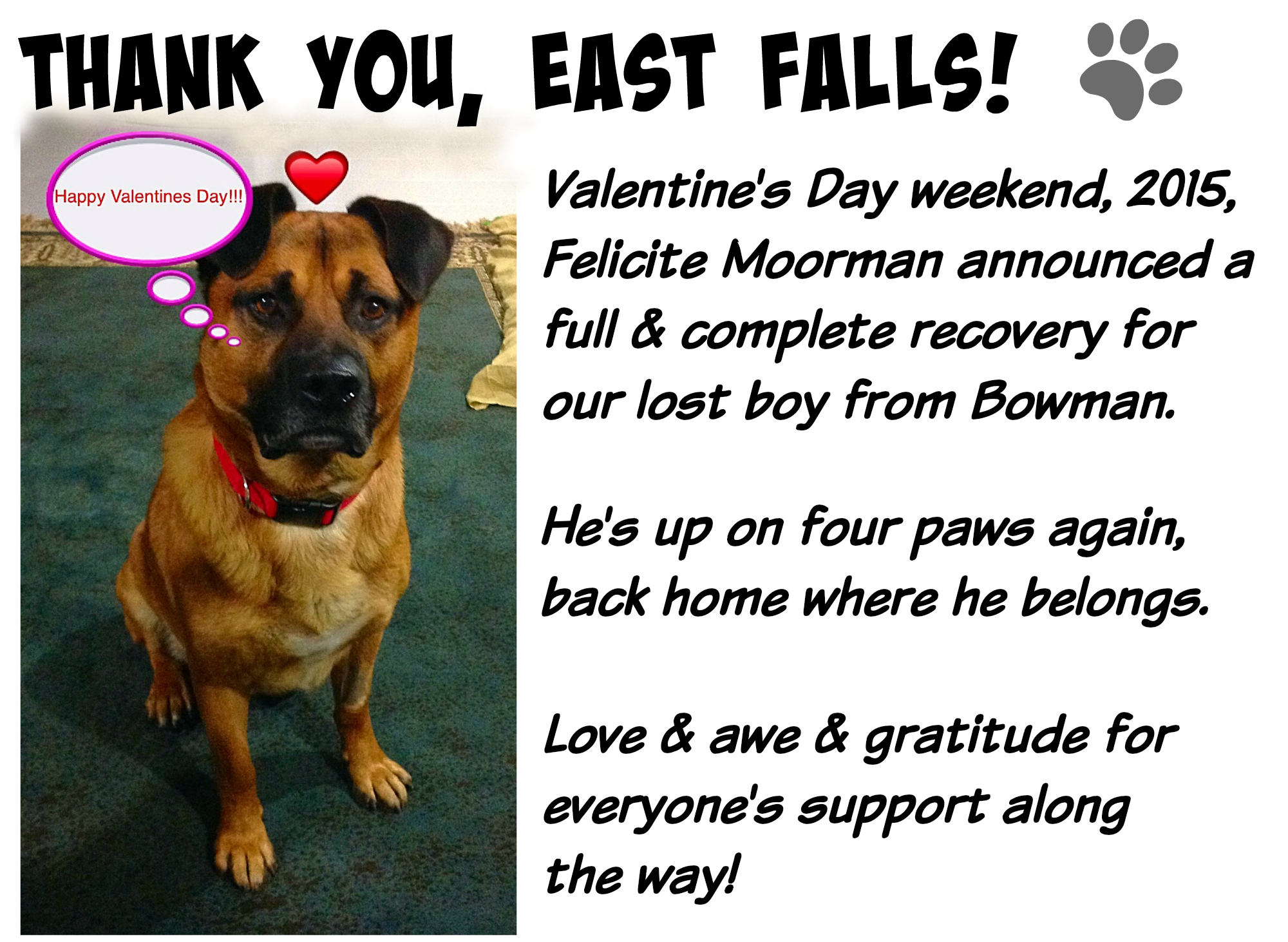 Fun Facts to warm your heart about St. James School in nearby Allegheny — from free community dinners to the most historic “Mannequin” challenge ever. [more…]