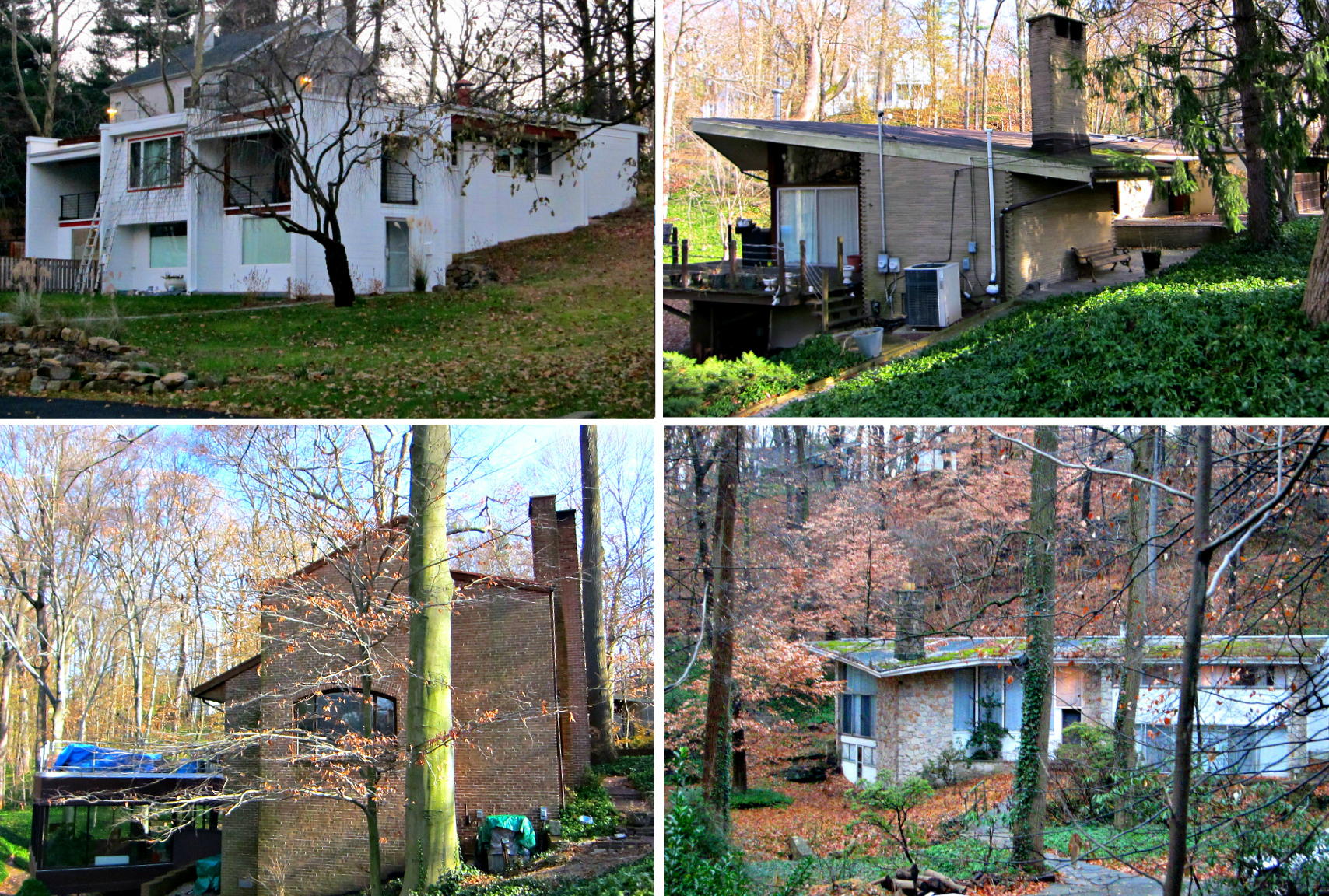 Pulling off Lincoln Drive, you may have noticed four distinctive “modernist” homes on that wooded stretch of Gypsy Lane.

The houses are boxy, angular. They adapt well to the steep Wissahickon hillsides here, with dramatic decks and windows.

Starting in 1957, three of the four were built by Galen Schlosser, supervising architect with the Louis Kahn firm, in charge of such acclaimed projects as the Salk Institute in La Jolla and Fort Worth’s Kimbell Art Museum. Closer to home, Schlosser was also at the helm of Esherick House in Chestnut Hill.

These Gypsy Lane homes, however, were independent projects, designed by Schlosser personally. The structures are lovely from the outside, and jaw droppingly beautiful inside.

Louis Kahn, by the way, has local roots as well: from 1957 until his death in 1974, he was a professor of architecture at the University of Pennsylvania. His style is considered monumental & monolithic — his heavy buildings do not hide their weight, nor materials, nor construction.

Two of the most influential architects of the 20th Century, Louis Kahn and Galen Schlosser no doubt inspired and challenged each other to exciting new approaches and perspectives.

NOTE: For more detailed information about Louis Kahn, including fine photos, paintings, and water colors of his works, check out this wonderful site.

The Modernist Houses of Gypsy Lane

Decks, windows, wonky angles — this Schlosser has it all. Maddeningly hard to photograph, the house almost hides from the road then opens out in back with several levels of decks overlooking a beautiful craggy creek bed.

This brick house (above) is named “Schlosseresin” and was the subject of a 1987 short film that includes an in-depth/rambling interview filmed on the premises with the architect himself.

Finally, at the bottom of the hill, the first-built of all these homes, sitting way back off the road. The property includes a swimming pool, and backs up to a great trail in the Wissahickon that follows Lincoln Drive up to Rittenhouse Town, where you can poke around history or head on deep into the park system.

At the intersection of Gypsy and Schoolhouse, our fourth Modernist house —  also built in the late 50’s. This eye-catching structure was designed by Irwin Stein after studying with Brutalist master Paul Rudolph at U of P.

Created as a home for his brother, Stein eventually wound up living here himself for awhile.

The home is striking in its use of raw concrete, with intentionally crude materials and construction. Brutalism has its roots in Communist “block” housing, with a bare-bones approach that many love to hate: the Round House downtown is a good example.

Our own example of East Falls Brutalist architecture calls to mind more West Hollywood than Downtown Leningrad, although perhaps that explains the “Red” accent paint…?