Recently I had been listening to a podcast put together by Trymaine Lee called Reconstructed as part of his main podcast Into America, and I was captivated by the power and perseverance of black resistance and manifestation, their faith in the possibility of a life free of violence and oppression. These kids carry that legacy as they stand on the shoulders of the giants who came before them to carry the torch in that struggle. Covering this, I didn’t know how I would write about it, but I knew I was in awe of these kids, our community and I am inspired by their possibility, by our possibility, just as I was listening to the stories from across time to form the ongoing project of Reconstruction.

Students, teachers, and community members marched from Roosevelt and Emlen Elementary Schools to meet up at the intersection of E. Washington Ln. and Chew Ave. to rally for peace and unity in our community. Students made their own protest signs, calling on the community to come together and create for them the world they deserve through solidarity, mentorship and mutual aid.

Students joined together to recite the poem 911 Emergency, led by Mrs. Glass-Mclntre and the Roosevelt Step team. A 6th-grade student read the poem Mother to Son, by Langston Hughes. 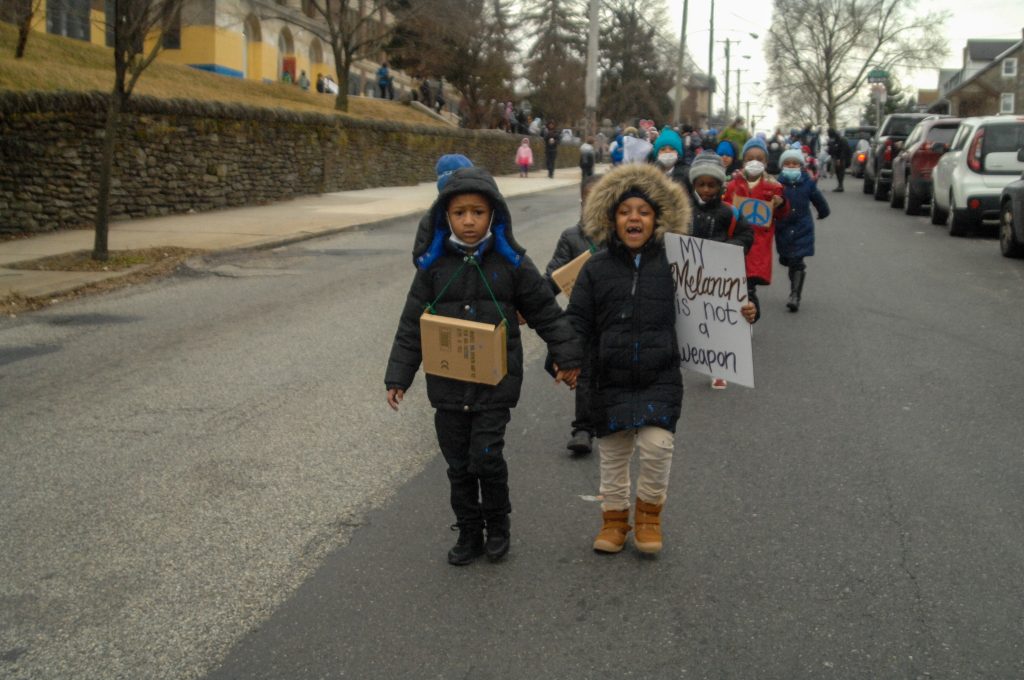 Hand in hand two Roosevelt students lead their class from the school down Washington Ln. to Chew Ave. on a “Peace Parade.” (Cory Clark) 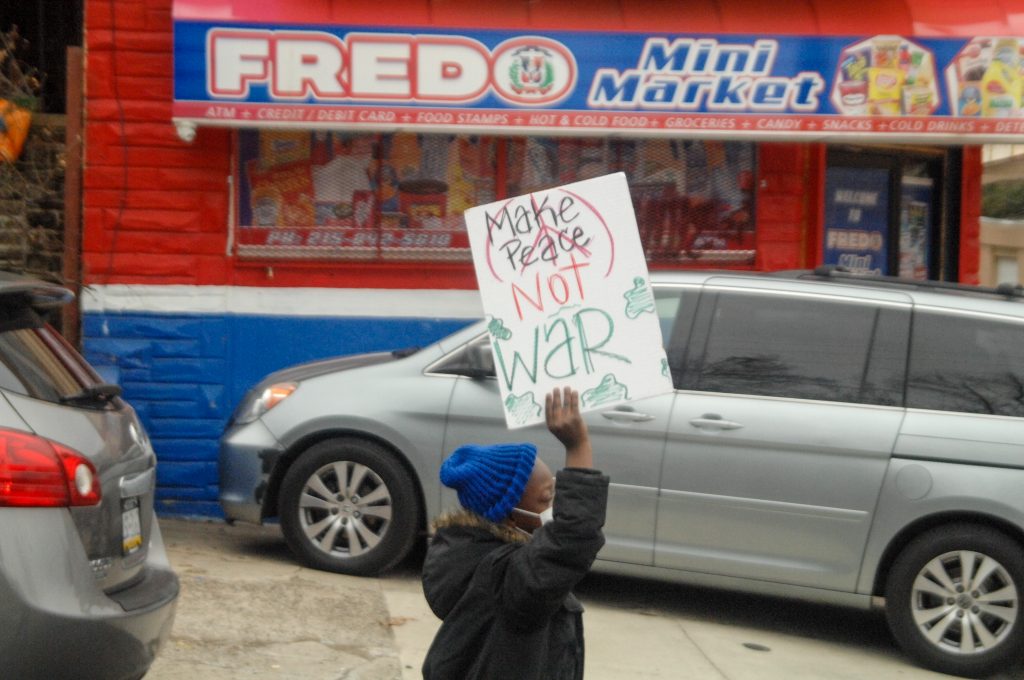 A Roosevelt student call for an end to war, even as Russia begins its invasion of Ukraine just the night before. (Cory Clark) 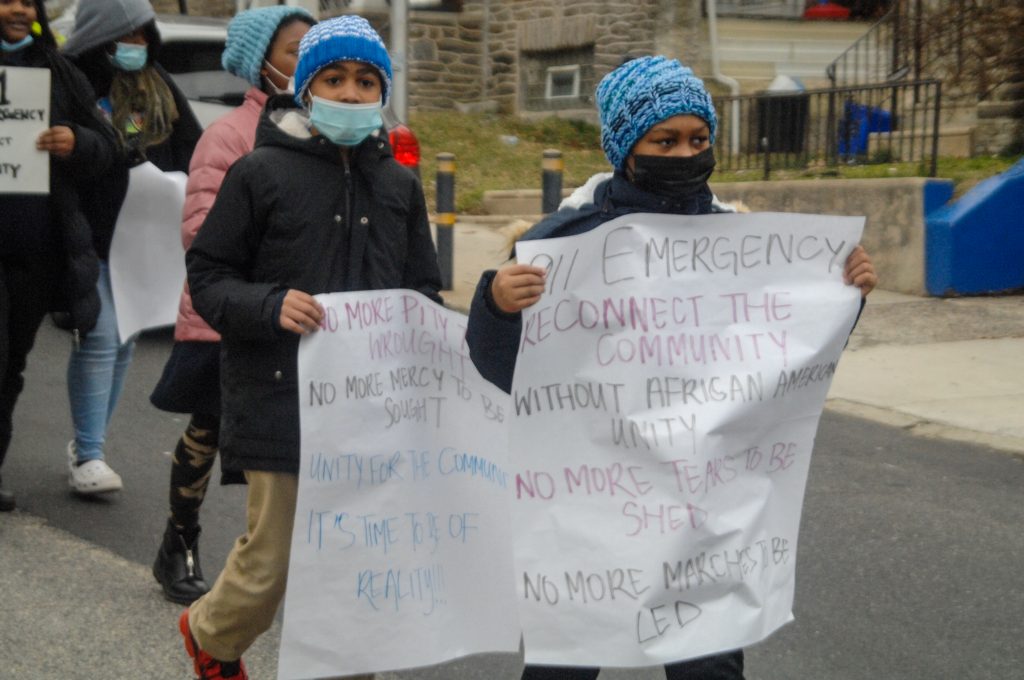 Two Roosevelt students carry with them on the march to Chew Ave the words to the poem 911 Emergency, which they will recite together with the students from Emlen Elementary School. (Cory Clark) 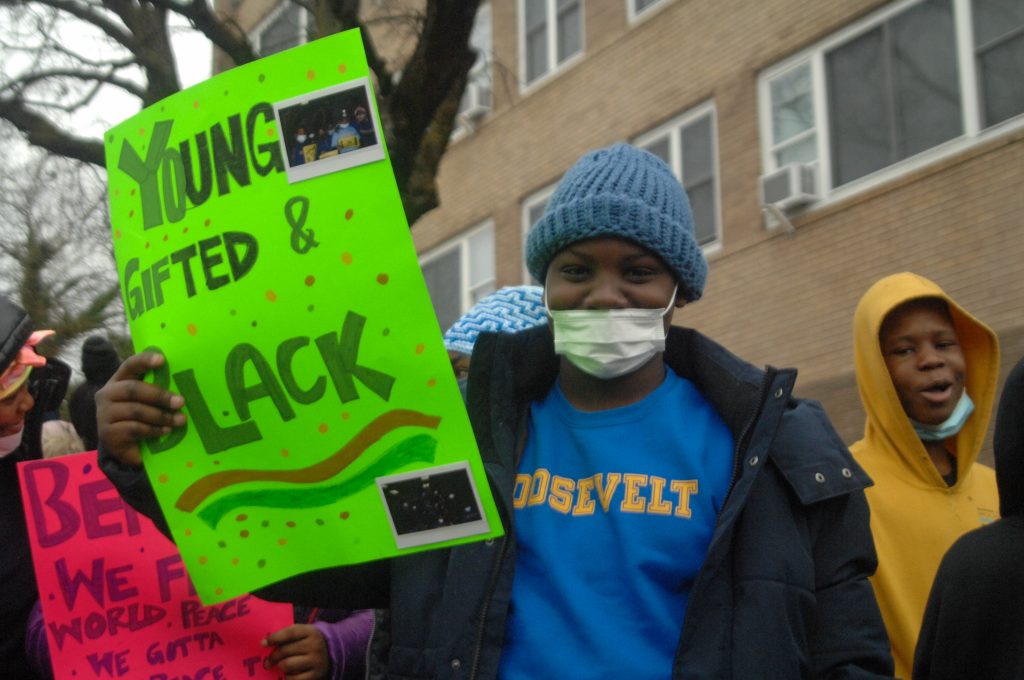 A young Roosevelt student celebrates Black excellence during a Peace Parade at the end of Black History Month. (Cory Clark) 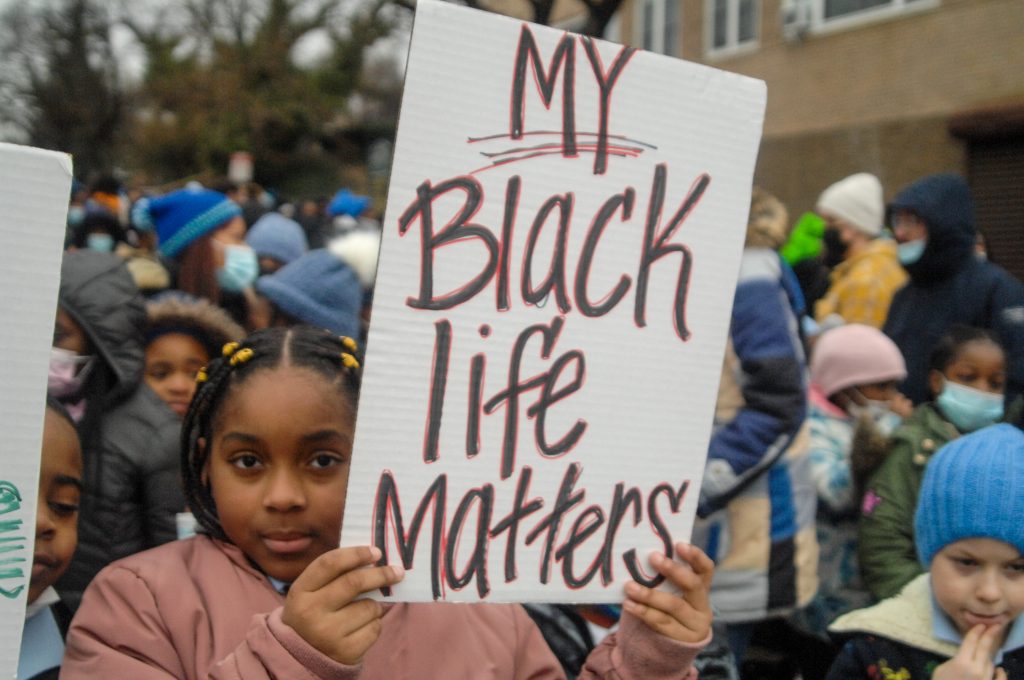 A Roosevelt student carries a sign highlighting that her life matters, she tells me that every individual Black life is precious, beautiful, worthy of saving, and helping to thrive. (Cory Clark) 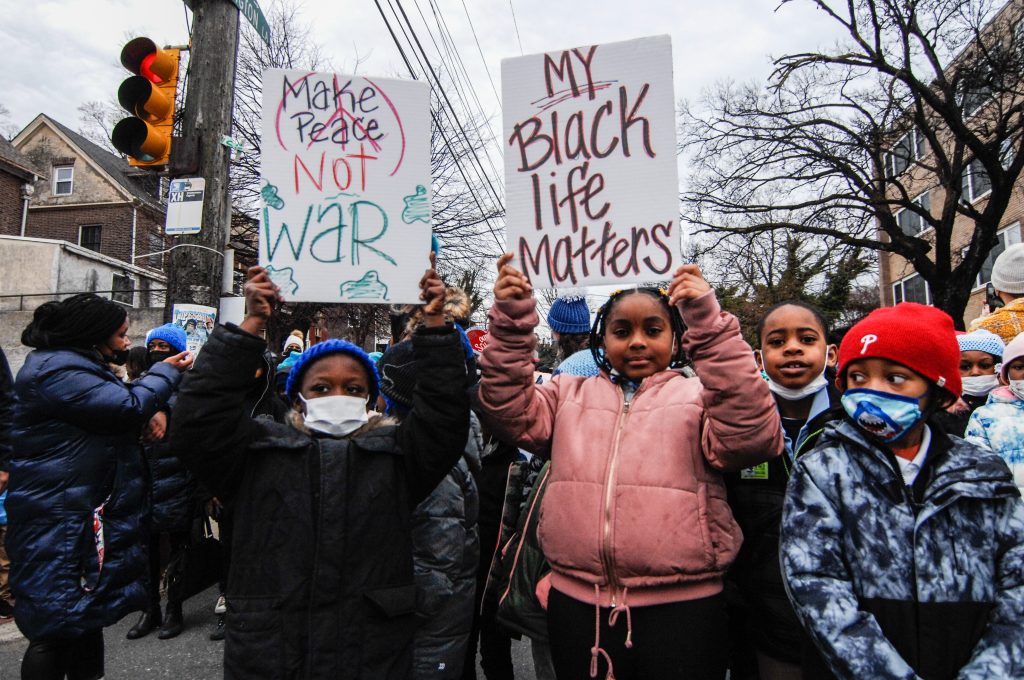 Roosevelt students demand an end to violence not just in our community, but around the world, they understand the only way this is going to happen is through solidarity with those suffering under the weight of violence and oppression. (Cory Clark) 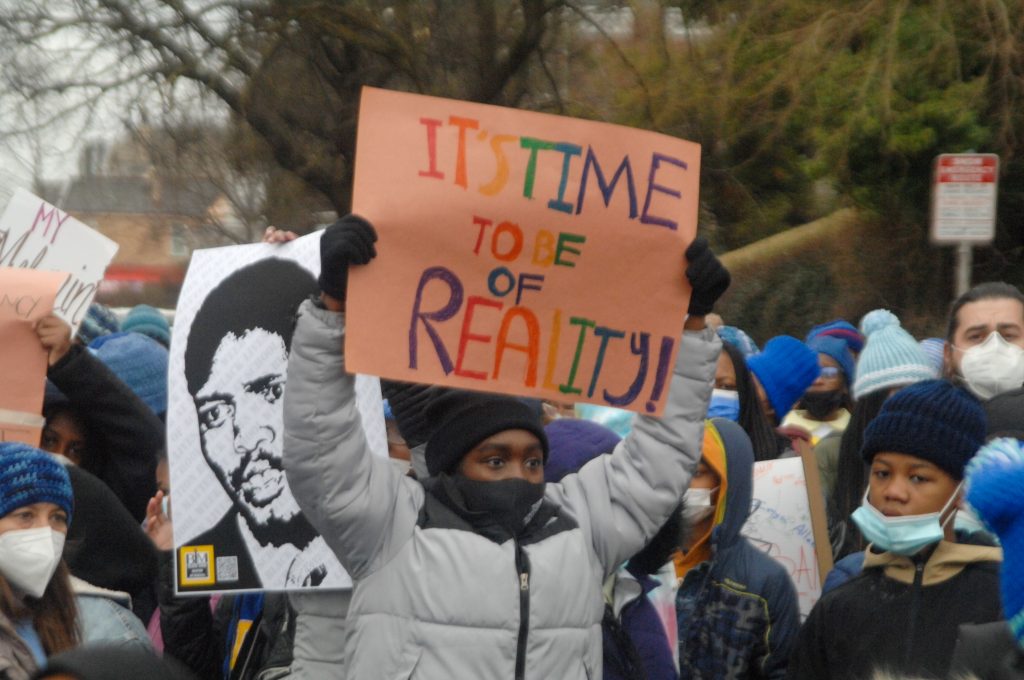 A Roosevelt student carries a sign with the end of the poem 911 Emergency, which calls us to see things for the way they are and work to change the world for the better. (Cory Clark)https://www.youtube.com/watch?v=QYfgZerz_w4 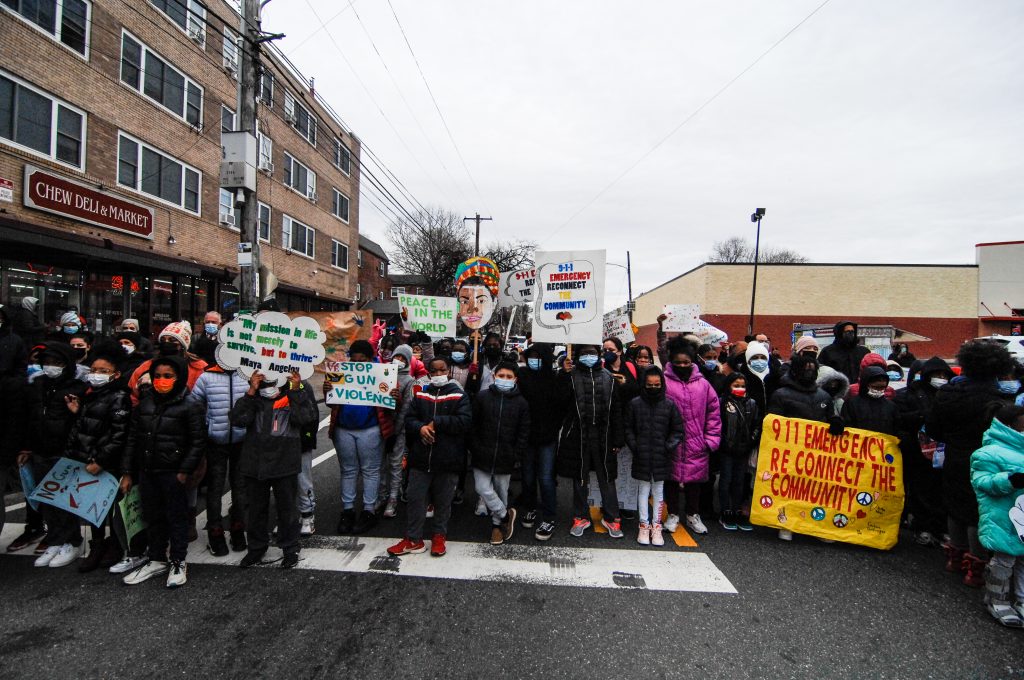 Roosevelt and Emlen Elementary School students rally at Washington Ln. and Chew Ave., to call for peace and unity in their communities. (Cory Clark) 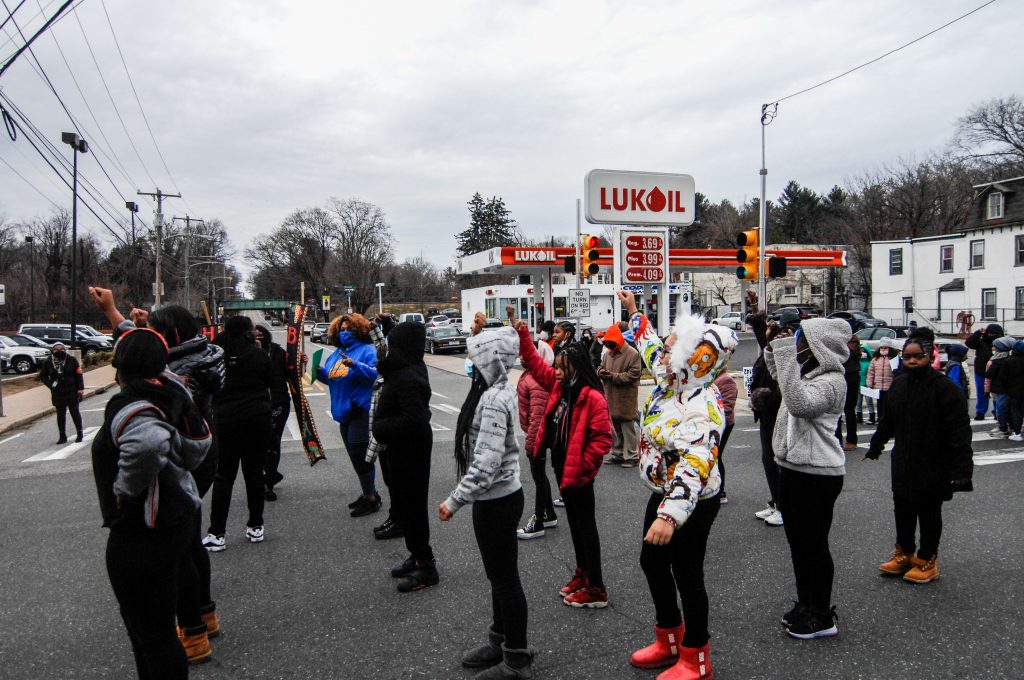 The Roosevelt Step team recites the poem 911 Emergency with solidarity fist held high, to represent not only their unity but the unity needed in the community if we are to overcome the economic conditions we face and the violence it breeds in our streets. (Cory Clark) 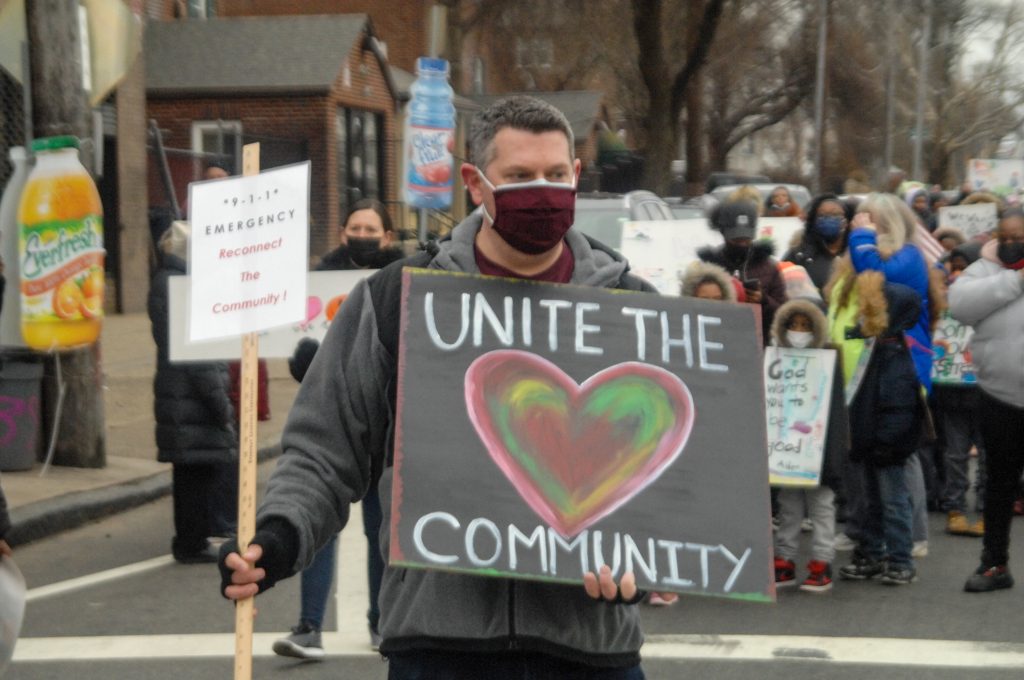 A teacher stands in solidarity with his students, calling for unity in the community. (Cory Clark) 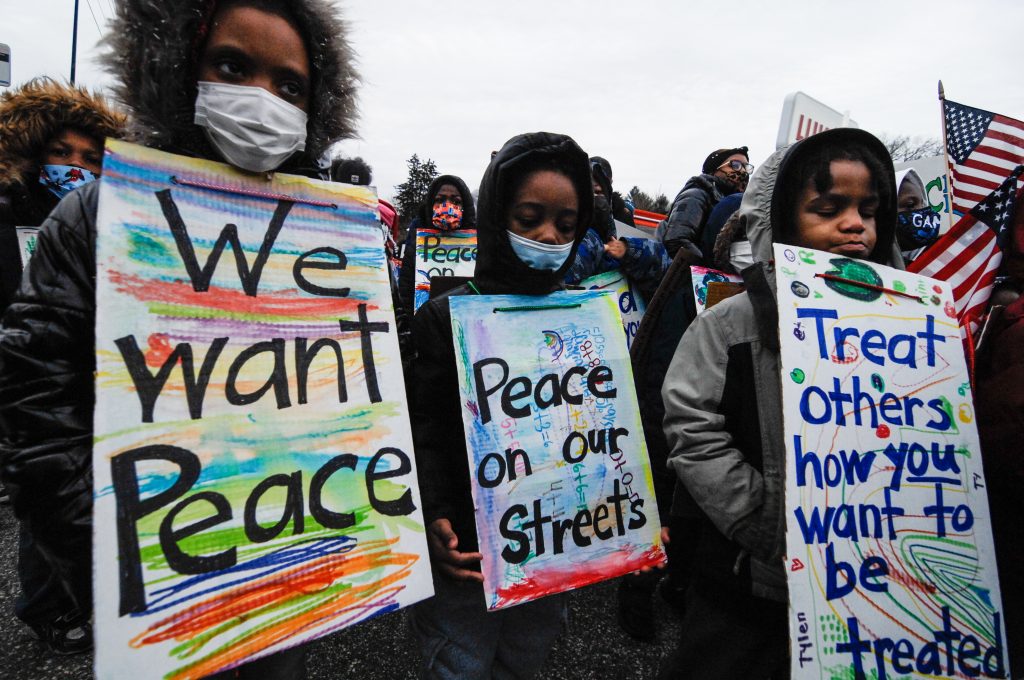 Three friends stand together to call for peace in our community, they say they’re clear this isn’t a request but a demand that they intend to push hard for as they grow into their power. (Cory Clark) 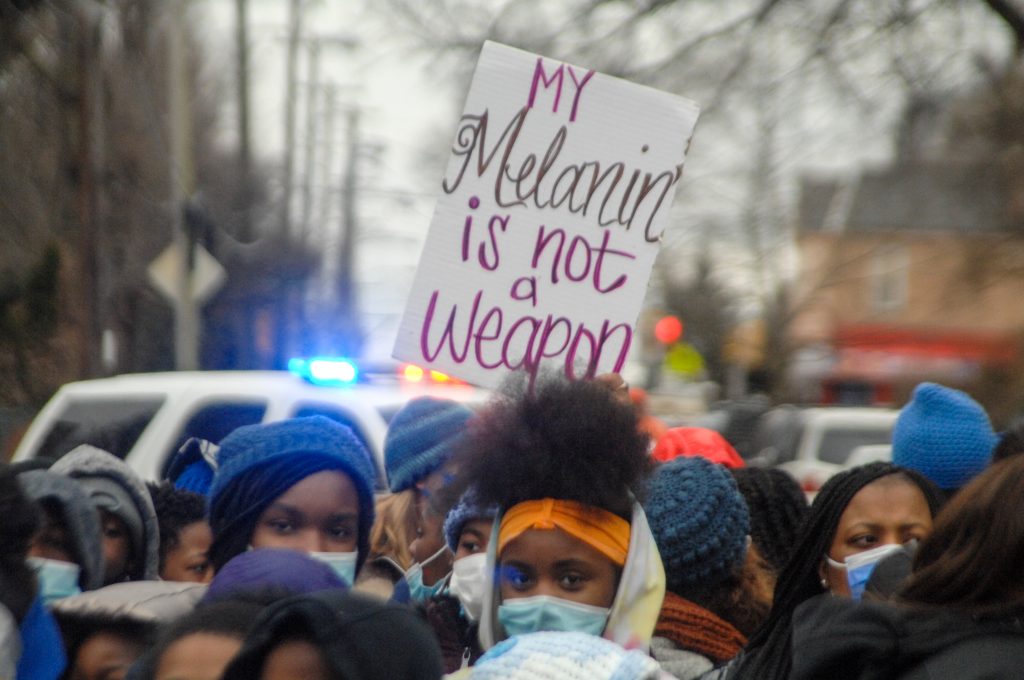 A young lady from Roosevelt holds her sign high so that everyone knows that her Blackness isn’t a threat nor an excuse to harm her or those that look like her. (Cory Clark) 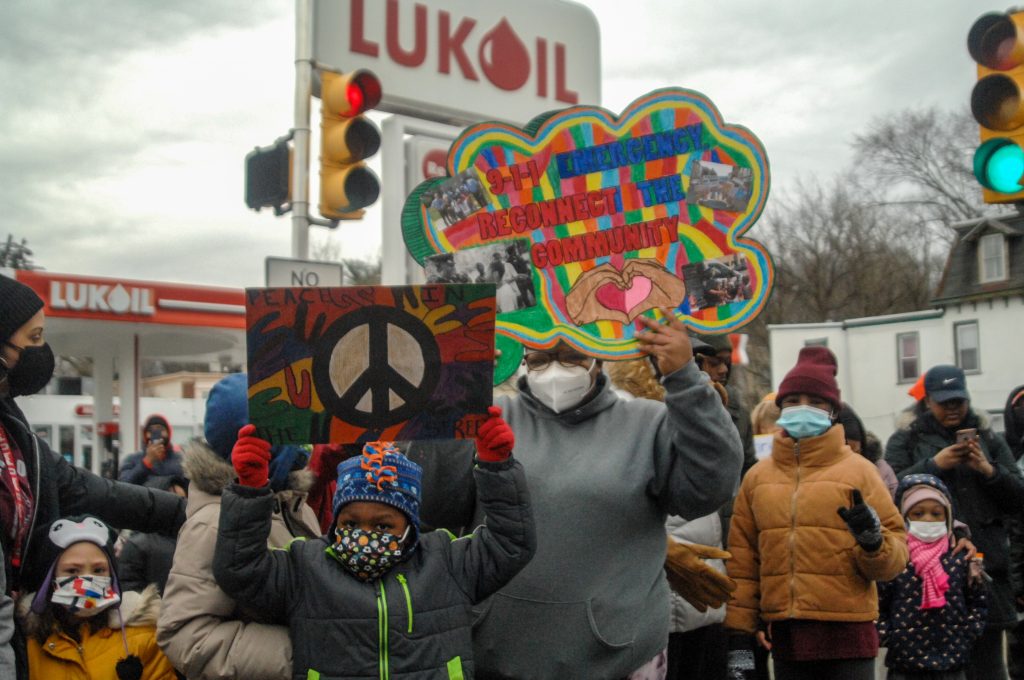 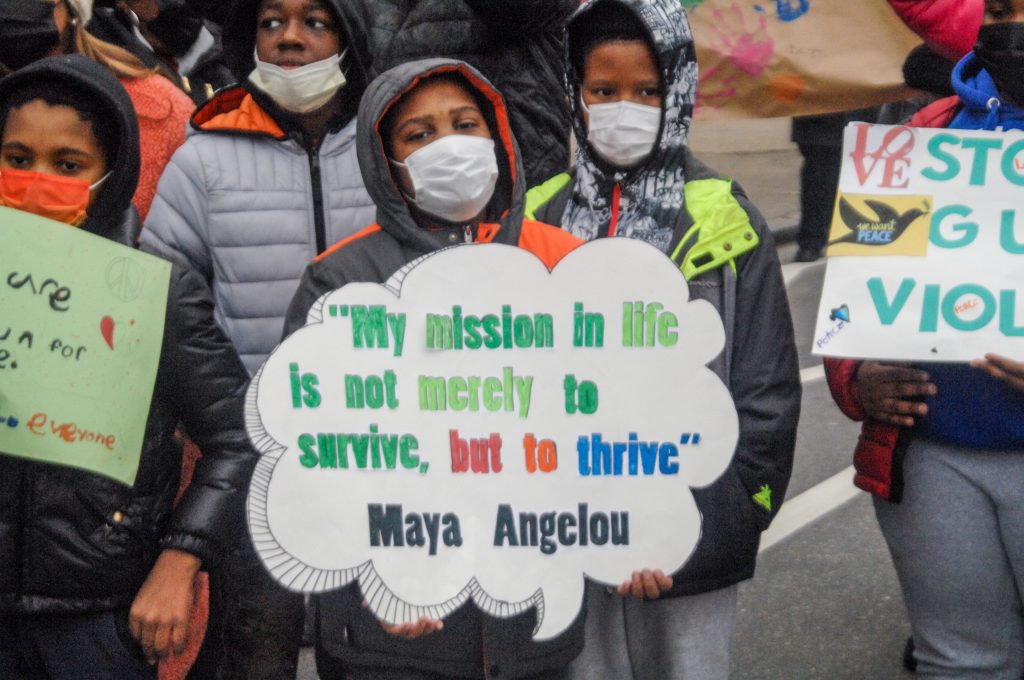 A student holds a sign quoting poet and Civil Rights legend Maya Angelou, during a rally held by students to call for peace and unity in their community. (Cory Clark) 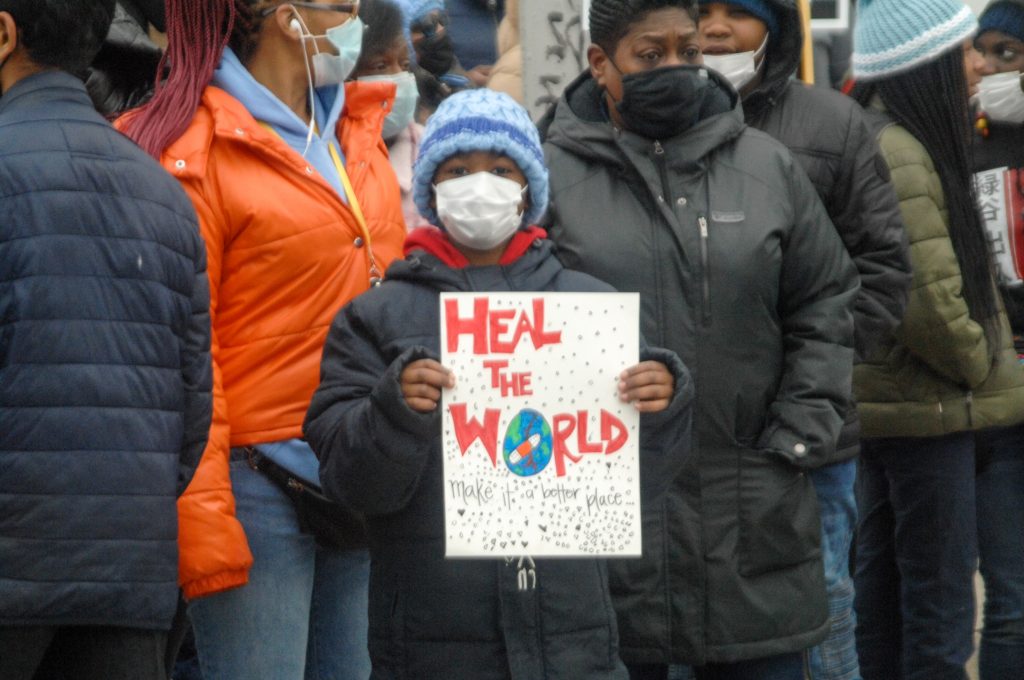 In Hebrew we have a phrase, that guides us as a people, Tikkun Olam, to heal the world and that is at the heart of what these kids are trying to do for their community and the world. (Cory Clark) 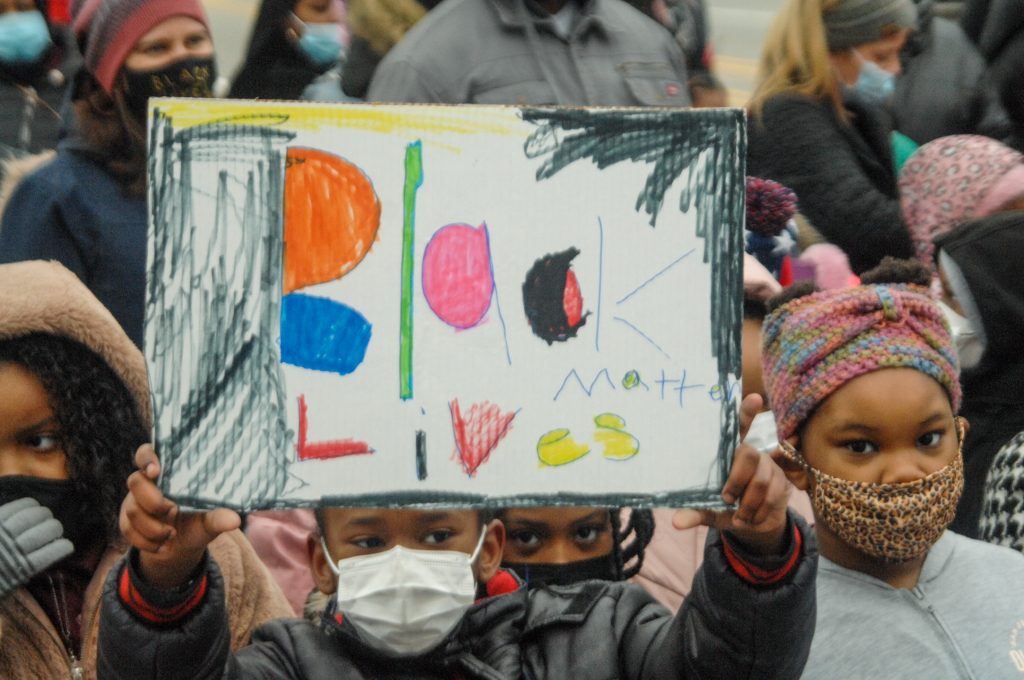 A student holds a Black Lives Matter sign that he made. (Cory Clark) 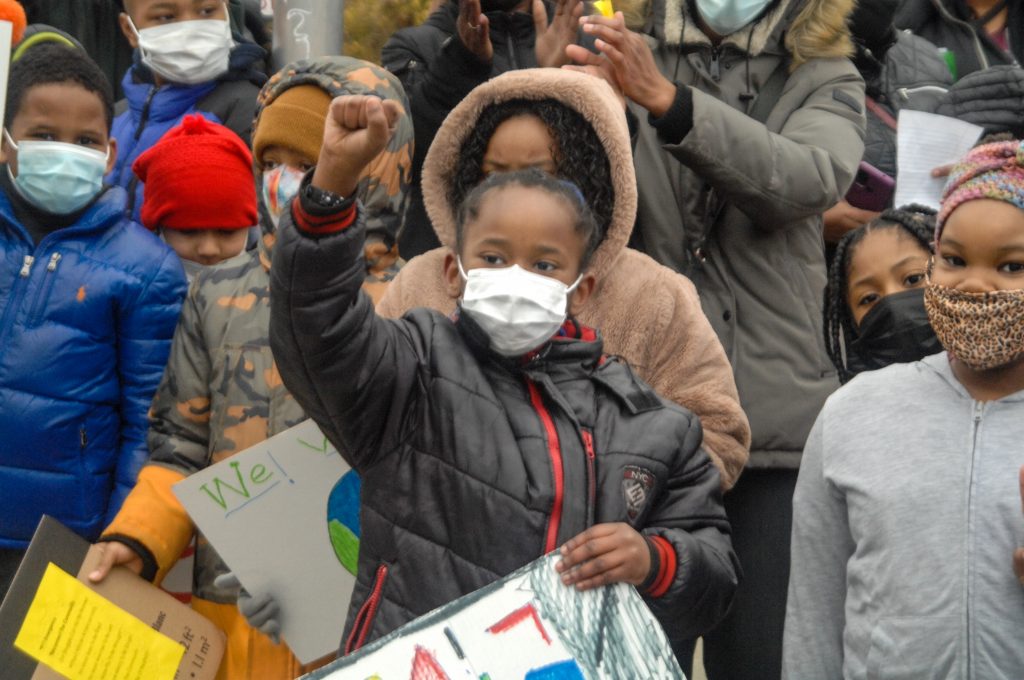 The same student from the image above raises his fist in solidarity, understanding the two symbols go hand in hand. (Cory Clark) 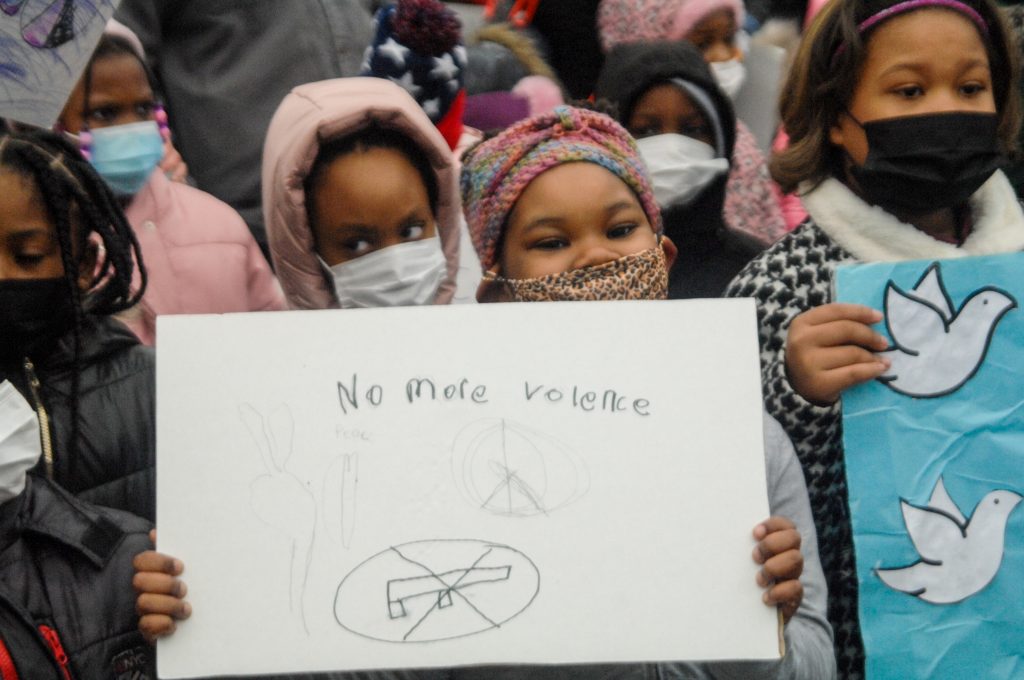 A student holds a sign she made calling for an end to gun violence in her community, she recalls doing active shooter drills earlier this school year and hearing gunshots late at night. (Cory Clark) 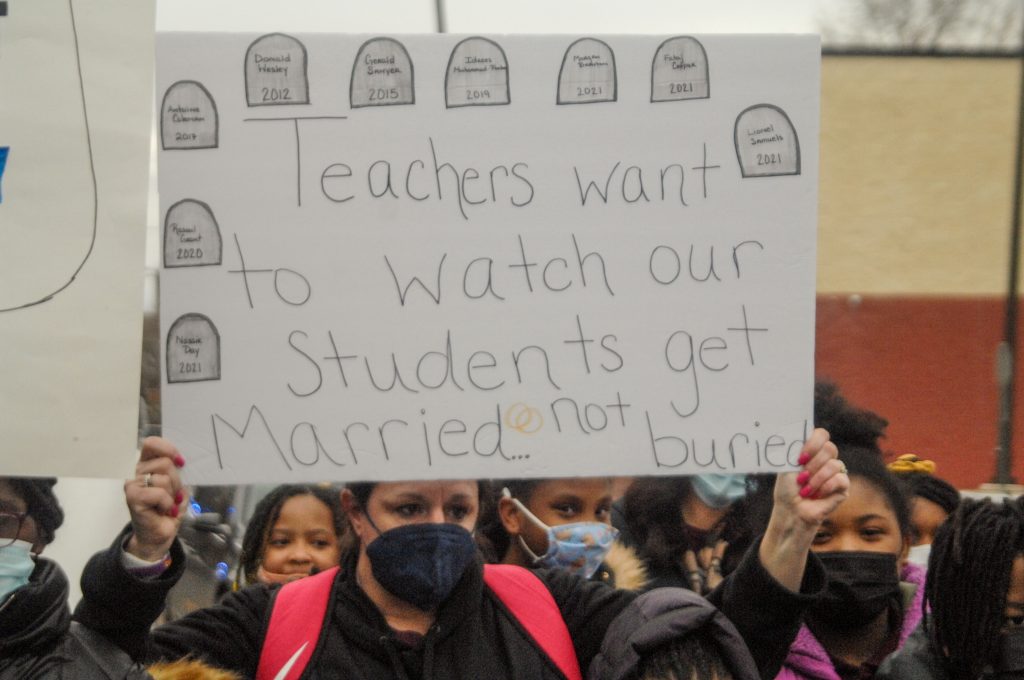 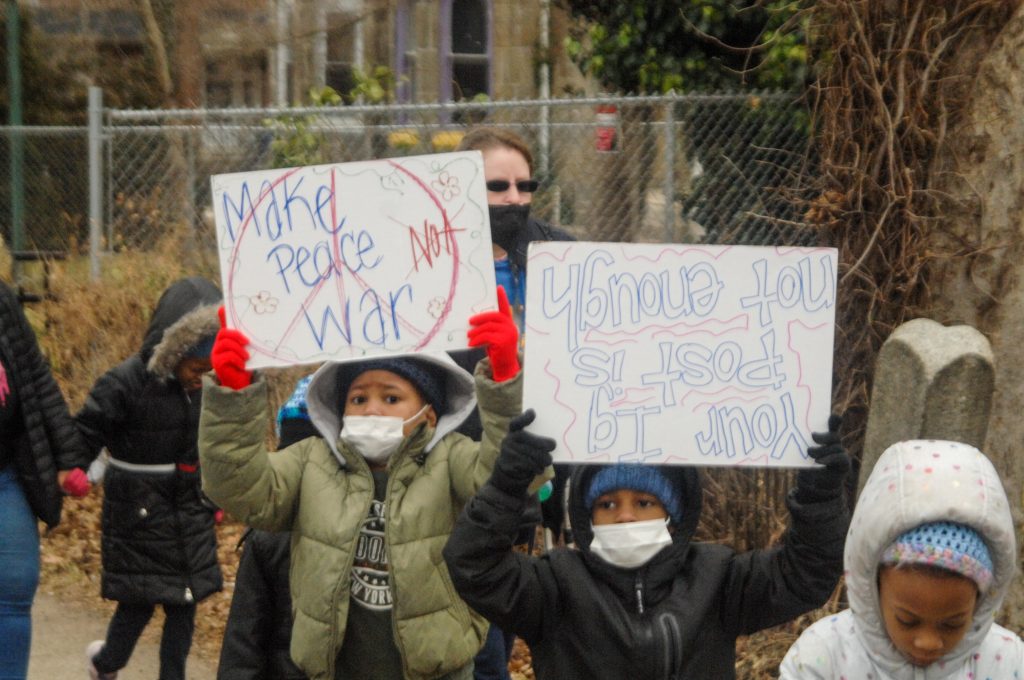 On the way back to the school a student carries a sign calling on people to take action, get involved, while another calls for an end to war. (Cory Clark)If you are as inspired by these kids as I am, you know someone in need or need assistance yourself, click on one of the follow links.