Time for them all to come down. 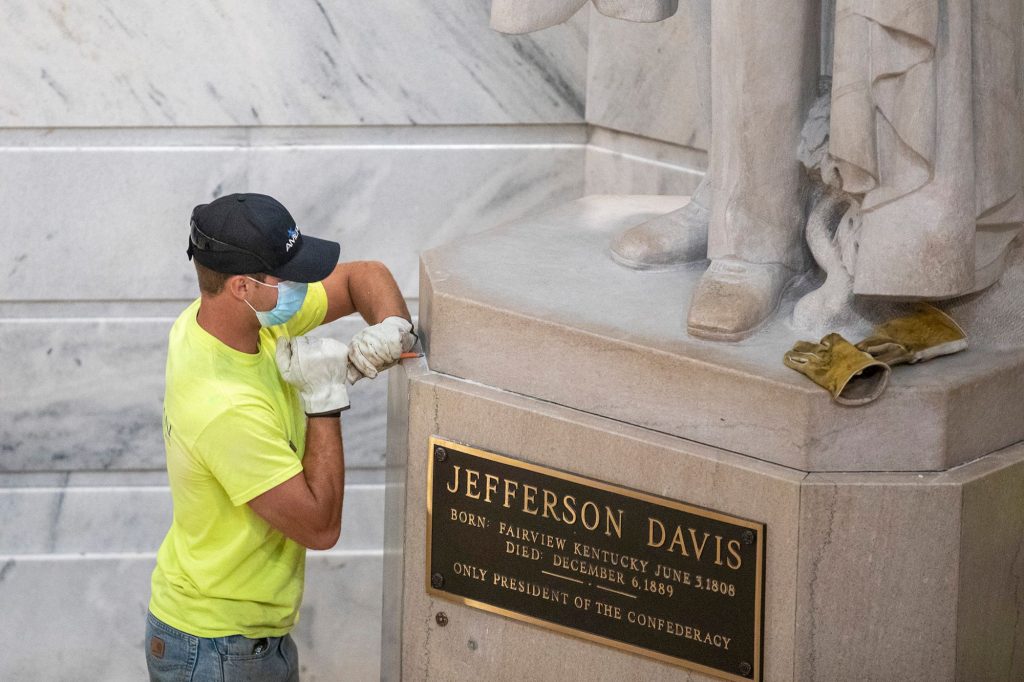 We were eventually hog-tied into the Confederacy after unsuccessfully trying to maintain neutrality, and a failed attempt at carving out a role as a peaceful mediator between the North and South. At the time, it was even quipped that there were really three countries: the Union, the Confederacy…and Kentucky. Birthplace of both Abraham Lincoln and Jefferson Davis – a chuckle-worthy coincidence of history.

So, while the Bluegrass state seemed unconvinced by either side at the time of April 1861 (which is a very bad look in hindsight) it didn’t stop the construction of memorials to white supremacy in our state for decades.

We too felt it appropriate to carve American traitors into marble while giving too much credence to the idea that the Civil War was fought, merely, for the protection of “states’ rights.” I don’t recall having this message impressed upon me in school growing up, but somehow our civic culture managed to synthesize tragic history and perverse affection.

Even within the walls of our state capitol, the scourge of Civil War and slave history seemed somehow muted by a marble likeness of Jefferson Davis polished to a high shine. The statue was removed on June 13, leaving me to wonder why any such memorial existed in post-1865 America at all. Stranger yet, how did the losers get to write so much of the history of the Civil War? (More than 1800 monuments and memorials still stand in the U.S. as of June 9, 2020.)

The confederate statue business (and the romanticized myth of the “Lost Cause” of the Confederacy) took off at the beginning of the 20th century and had a resurgence in the 1960s – both times when the enfranchisement of African Americans was at a crossroads. The push for the vote and other civil rights for African Americans threatened the order of the Jim Crow south and suddenly memorials to “Southern heroes” appeared in public spaces. They not only glorified the “good old days” for many southern whites but were meant as an intimidating reminder to African Americans of their “proper place.”

I agree with the cliché that those who fail to learn from history are doomed to repeat it, so after all of the Lost Cause statues are torn down, we should place a few of these chiseled “martyrs” in museums so they can be used to educate us all about the dangers of mythmaking. They have no place in public parks and squares, perched above citizens who have to literally look up to traitors and slaveowners.

Although the monuments have been a national embarrassment for a long time, the murder of George Floyd and the Black Lives Matter protests now make it a moral imperative that these statues, and the harmful ideology that they represent, be torn down and relegated to a shameful past. The same goes for our military bases too. It’s long overdue that the Union finally wins the Civil War.

On the Shoulders of Giants

Long before the George Floyd protests ignited around the country and the world, Germantown’s own Reverend Doctor Leon Sullivan led a charge for the rights of African Americans. [more…]

Reform, Defund, Abolish the Police: What Does it all Mean Republicans want you to believe that any sort of reform to policing will mean that armed gangs of thugs will take over your neighborhood. The [more…]