The first step in changing the world is imagining a better one.

So it is January, and everywhere people are sharing Martin Luther King, Jr’s quotes and anecdotes, in honor of this very important man’s national holiday coming up on the 16th of this month. Rightfully, everyone knows about MLK! But I’m here to tell you about another great dreamer who also marched tirelessly for racial equality – and who also got her own national holiday: Juneteenth, which Biden signed into law in 2021, almost 40 years after Reagan declared MLK Day. This is the story of Opal Lee.

Lee was born in 1926, in Texas where Juneteenth originated. Texas was the country’s westernmost state during the Civil War and slavery’s last holdout, where plantation owners had fled as Confederate forces lost ground. For 2 ½ years after Lincoln’s Emancipation Proclamation, enslaved people in Texas labored as captives (and endured unspeakable trauma) until finally on June 19th 1865, Maj General Gordon Granger and his Union troops arrived in Galveston to read Order No. 3, declaring “all slaves are free.”

Celebrations immediately broke out, and by the next year a regular holiday had been established in many newly-freed Black communities. Called “Juneteenth” or “Jubilee Day,” these commemorations often featured prayer, music, barbecues and family – always family! Every town in Texas had their own spin, though, and Lee’s earliest memories recall big fairs and parties in her hometown of Marshall, TX. By contrast, Juneteenth was more of a quiet, private affair in Fort Worth where her parents purchased a house when she was ten years old.

There was a reason for this city’s Black residents to keep their heads down: white supremacists here had pushed back against Emancipation celebrations over the years, even succeeding in banishing them from public parks. Tragically, the Lee’s family’s successful restoration of an old fixer-upper close to white areas attracted the ire of a jealous, racist mob who chose that Juneteenth to violently chase them out and burn the whole place down, even their furniture (which was used as kindling).

Local police did nothing; the Lees were never compensated. Indeed, countless other Black families suffered similar violence and harassment in the “Jim Crow” era between the Civil War and Civil Rights. Lee’s parents quietly accepted what happened and resolved to rebuild their lives. They worked tirelessly to buy another home, never speaking of the event again. Still, the memories made a big impression on young Opal, who later said “The fact that it happened on June 19th spurred me to make people understand that Juneteenth isn’t just a festival.”

Inspired by her parents’ determination to defy hatred and ignorance to achieve their dreams, Opal Lee decided on her own dream: a national holiday recognizing Juneteenth. She started at the local level, helping organize Fort Worth’s annual Juneteenth celebration around activism and education. She arranged a special bus ride for the city’s leaders, driving them through old neighborhoods and pointing out culturally-significant landmarks. These insider tours became an annual tradition, but her Walks of Freedom would propel her (and Juneteenth) into the national limelight. 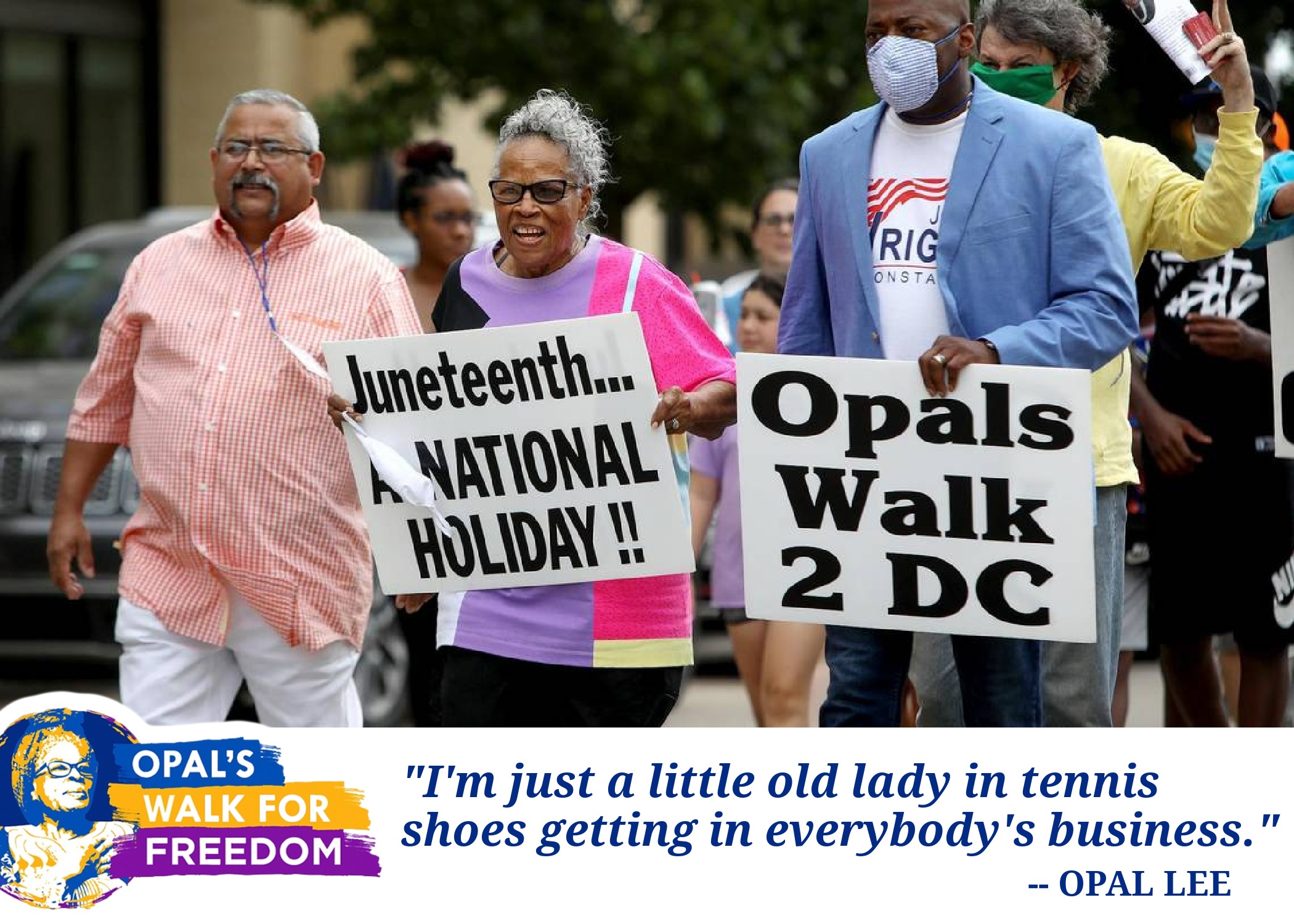 To promote awareness of this holiday, Lee took to the streets – literally – by walking 2.5 miles through Fort Worth as a symbolic nod to the 2 ½ years that the country’s last enslaved people had to wait before Emancipation reached them. Lee’s annual public march grew bigger every year for decades, drawing huge crowds of all races and generations. “Juneteenth is not a Texas thing. It’s not a Black thing. We’re talking about freedom for everyone!” she insisted.

From September 2016 to January 2017, at age 89, she walked 1400 miles from her home in Fort Worth to Washington DC, where she hoped to speak with Obama. The stunt didn’t work (he was reportedly out of town) but the publicity kick-started grassroots efforts around the country. Lee kept marching in 2.5 mile increments in towns from coast to coast. Her change.org petition received more than 1.6 million signatures. “It’s going to be a national holiday, I have no doubt about it,” she said, “My point is, let’s make it happen in my lifetime!” On June 17, 2021, she got her wish.

As an honored guest of the White House, Lee had a front row seat for Juneteenth’s signing into law, watching all her hard work make history at last. She received a standing ovation as “the grandmother of Juneteenth,” and the President got down on one knee to show his respect and gratitude. When she got back home, she wrote a children’s book about her journey, started a community farm, and has continued to campaign for a better world. 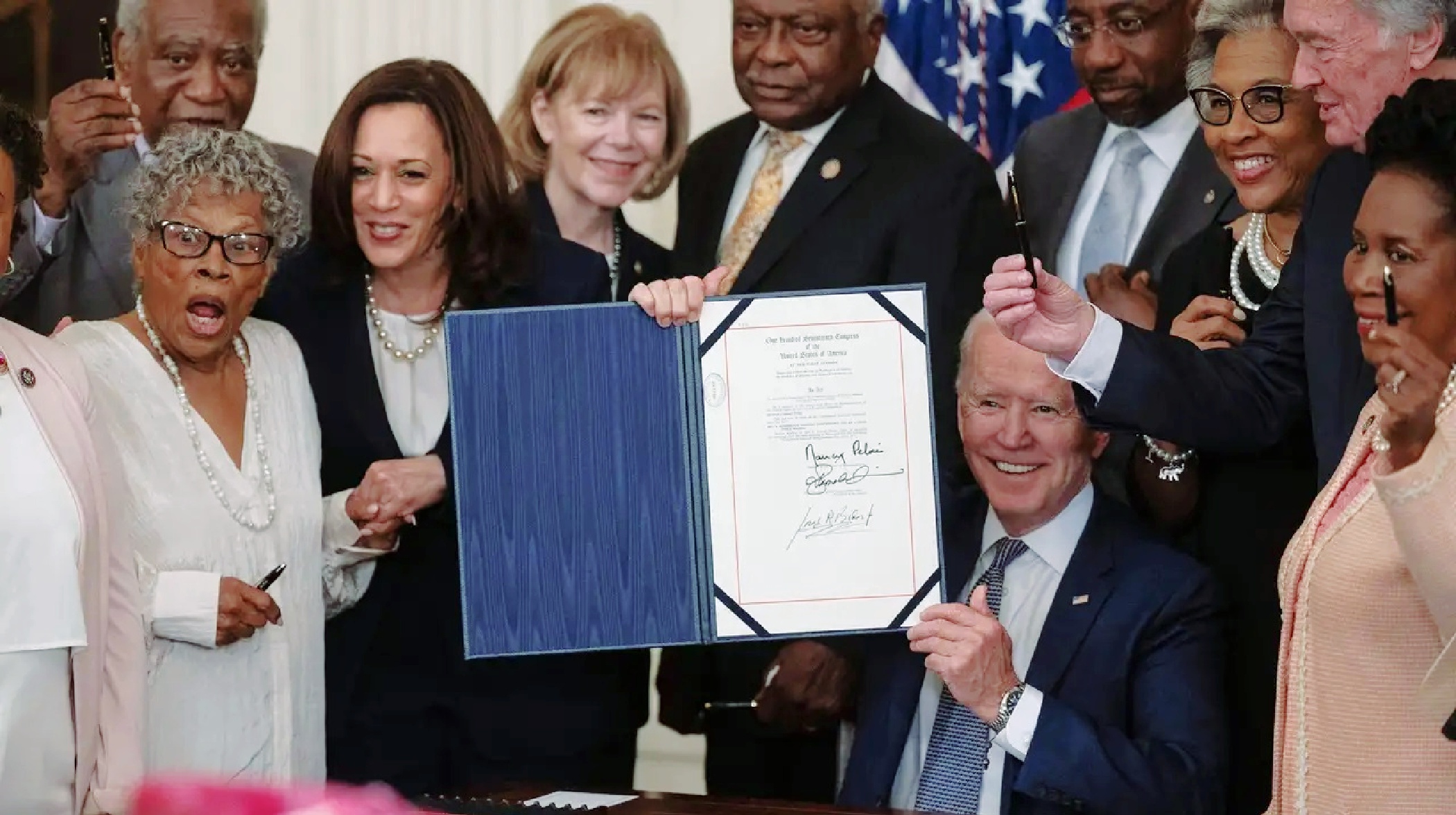 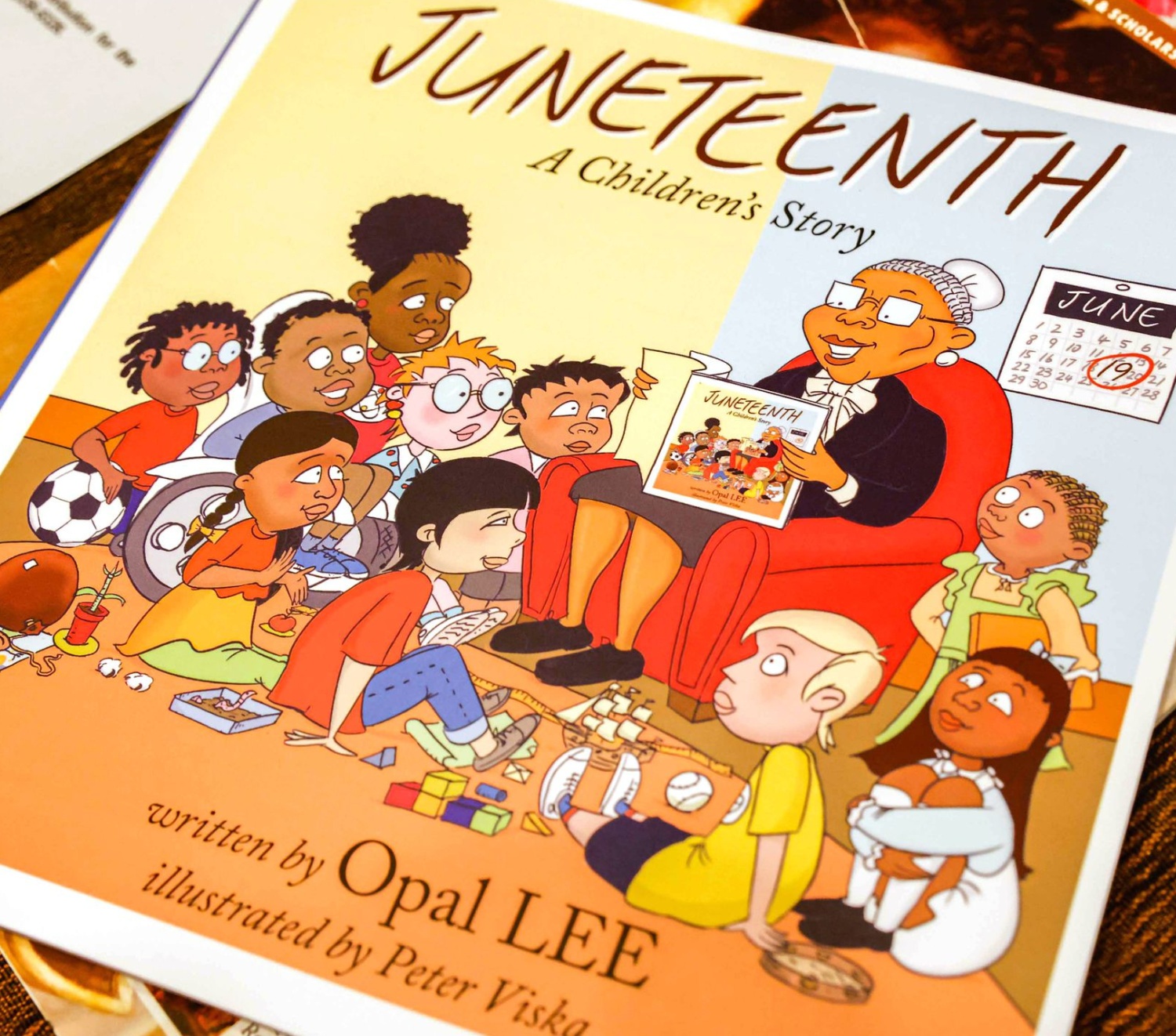 “We’ve got to address the disparities,” she said in a recent interview with Canadian Broadcasting, “I’m speaking of homelessness and joblessness, healthcare that some people can get and others can’t. And police brutality and climate change.” The solution, she sees, begins in all of us. “If people can be taught to hate, they can be taught to love. And if there’s an army of people teaching folks to love, hey, we’re going to solve this problem together.”

In 2022, at 95 years old, she was nominated for the Nobel Peace Prize, which would’ve made her the oldest recipient if she’d won. She didn’t, but that hasn’t slowed down her drive to make a difference. To me, Opal Lee embodies the spirit of Juneteenth: the will inside all of us that strives to dream big, that’s willing to risk comfort for the chance of greater good.

Considering Lee’s family’s terrifying attack when she was a child, no one would’ve blamed her if she’d lived the rest of her life as invisibly as possible. But Lee shows that dreams can give us courage, can help us break from our bubbles and dare to pursue our grandest goals. When I feel my own doubts and fears trying to limit me — trying to keep me stuck when I really need to fly —  I think of Opal Lee, who fought long and hard to ultimately realize her greatest ambition.

Lee often paraphrased MLK’s famous quote, “None of us are free until we all are.” Here’s to the biggest liberty we can enjoy, the freedom to follow our dreams.

🤩 DID SOMEBODY SAY DREAMS? 🤩

Philly rapper Quise Free has the soundtrack for your next leap of faith. Music, he believes, is a universal tool for human connection and achievement. Though his songs, he urges listeners to find their purpose and embrace it — to dare to make space in the world for all your own special awesomeness.

Sing along in this powerful playlist, and let the good vibes lift you up. 🦄🎶🌈🙌

I don’t care what the dream is, dream big.
Tell yourself you gonna do it and believe it.
When the odds are improbable
Anything is possible
Stay up on the right grind,
You gonna let your light shine.

More lyrics and inspiration in our article, “Quise to Life” (July 2022). Follow him @quisefreemantg.

About Marwa A. 2 Articles
Marwa A. is a married mom of two who enjoys writing, cooking and enjoying movies with her family. She lives in Northeast Philly, and came to us via Friends, Peace & Sanctuary Journal (a partner of WHYY’s News & Information Community Exchange).

Mad or Nah: He Said What?

Let down by our government’s failure to protect Voting Rights?  [more…]