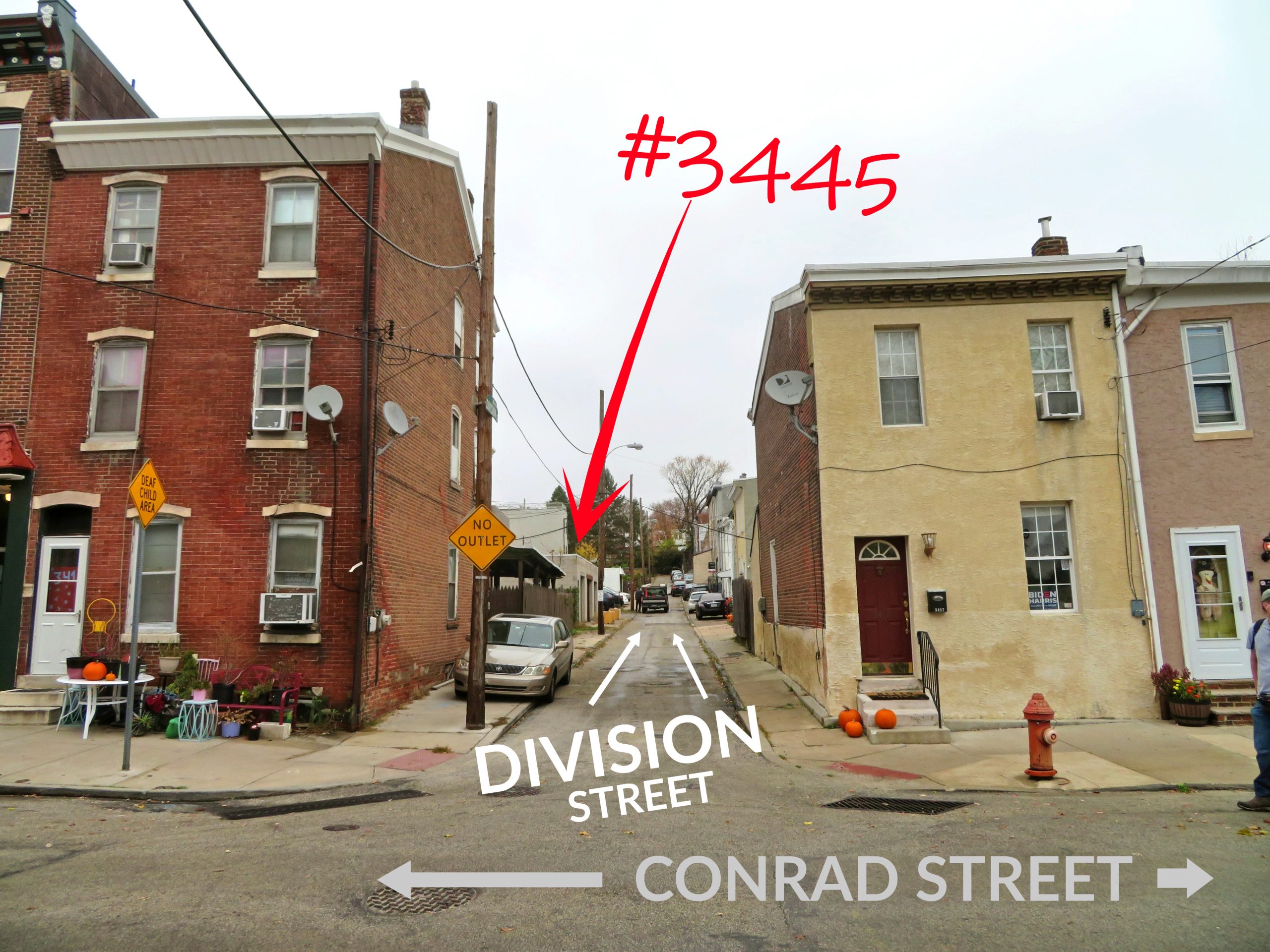 Is there room for three new townhomes if you subtract a triple garage? SCROLL DOWN for new meeting video plus Chuck’s Garage project updates.

Division Street is a narrow dead-end passage off Conrad Street in East Falls — basically an alley for half the street whose backyards butt up to it. Opposite, a stretch of rowhomes faces front and rises on an incline along an old wall of Wissahickon schist. Street parking squeezes in where it can.

Seems an unlikely spot to try to fit three modern townhomes but hang on a sec: while the plans are for new construction, the proposed lot already has three garages on it. The developer (The Nubo Group) would simply demo that structure and rebuild the three garages with single-family homes on top, plus roof deck (and roof access).

Not so fast, though. When divided three ways, the lot provides 630 sq ft per townhome — that’s 510 sq ft less than the City’s 1140 sq ft requirement for single family homes here. The Nubo Group (TNG) will need a variance from Philadelphia’s Zoning Board, and the first step is presenting their plans to the community for approval & feedback. (Note: TNG is scheduled to appear before the ZBA on February 10 @3:30.) 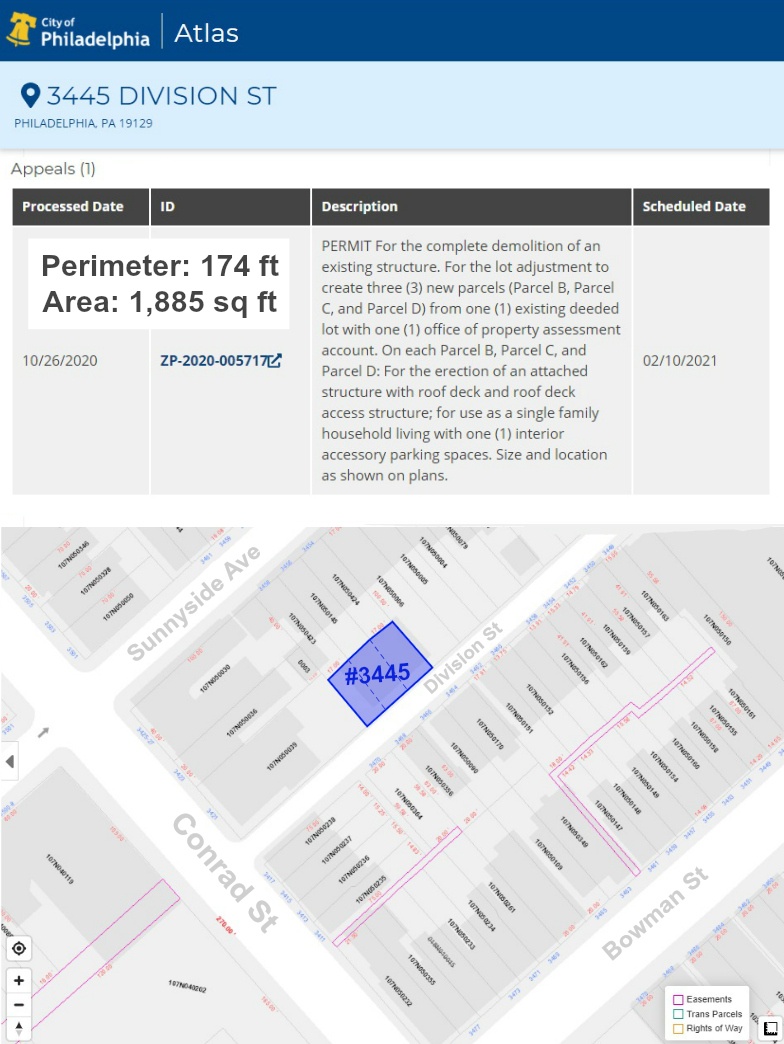 November 18 Zoning Meeting
TNG planned to make their presentation last month at the community zoning meeting, but couldn’t attend, begging off at the last moment and promising to present in December (Wednesday the 16th). Despite the change in plans, reps from East Falls Forward and East Falls Community Council carried on with the meeting, gathering input from near neighbors about the proposed development plan.

The main concerns were shading (the proposed building height of 38 feet would throw serious shade on neighbors across the street), parking garages facing the street, and too many proposed townhomes on such a small parcel of land (no front or back yards).

A few possible remedies were suggested to make the plan more neighborhood friendly. First, a setback at the top story of the buildings would reduce shading on nearby buildings. Second, reducing the number of townhomes from 3 to 2 would allow space for front and back yards, which all agreed would be more in keeping with the character of the neighborhood.

No remedy was proposed for the front-facing garages, but meeting attendees did propose a working group of near neighbors to gather ideas about it and to determine what other changes they’d like to see in the development.

The hope was that a working group would present a unified vision of the neighbors’ concerns, be more persuasive to TNG and might even lead to a binding community benefits agreement between the developer and the neighborhood. It wasn’t clear who would lead the working group, but Linda Norris (of Division Street) agreed to go door to door to gather neighbor feedback in preparation for a working group meeting this month.

For more info, readers can peep this property on Atlas, Philadelphia’s “front door” for real estate research, history, permits, crime reports, and more. Check in with East Falls Forward, the neighborhood’s other RCO and only democratic zoning body, for more info, including architectural plans and renderings when available.

Can’t make the December 16 meeting? Email us your questions/concerns at editor@nwlocalpaper.com. 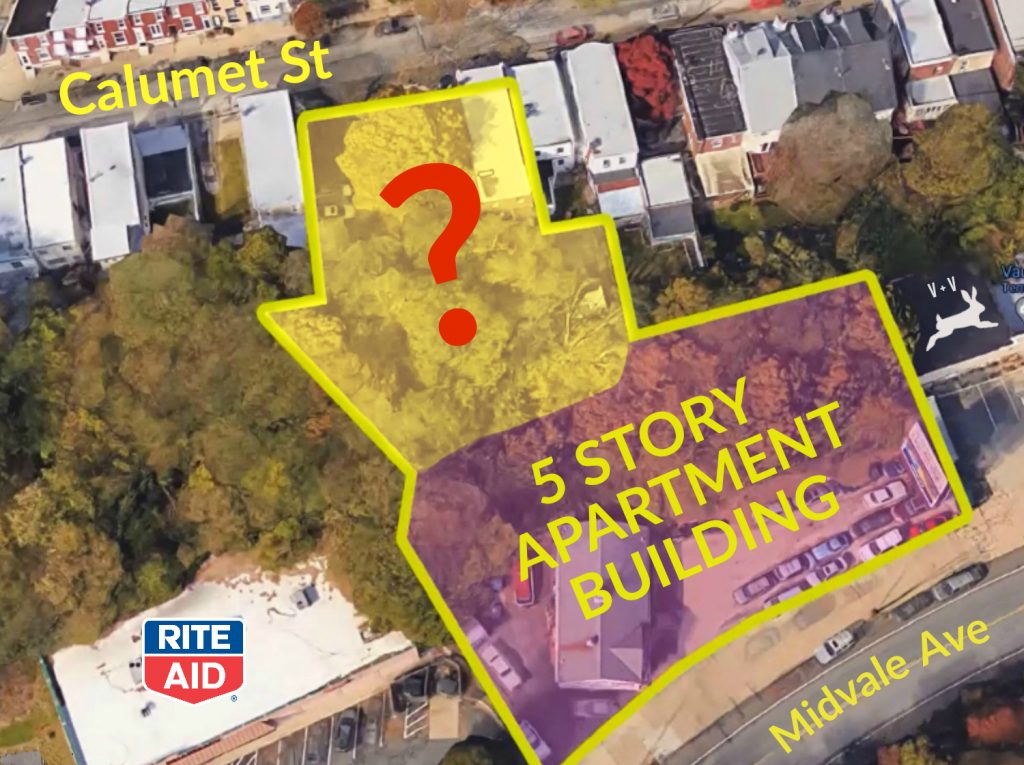 Calumet Questions Continue
In other zoning news, possible development on the 3500 block of Calumet remains unresolved. Parking lot? Townhomes? Last month’s zoning meeting provided no clues regarding next steps for developer David Ross (Argo Property Group) plans for several lots the company owns on Calumet Street. His most recent plan called for creating a parking lot that would service the 36 unit apartment building he plans to build — by right — on Midvale Ave. (It would be connected to the apartment building’s rooftop by a 30-foot walkway.)

But that plan seems to have been “back burnered” in the face of pushback from EFCC’s zoning committee and neighbors on Calumet. In response to suggestions for townhomes on the lots instead, Ross agreed to meet with an architect and “kick around some ideas” for how that might work. He said it might be possible but “variances would be required” given how many homes he’d need to place on the lots (as well as the off-street parking EFCC neighbors urged him to include). We’ll find out more at the December 16 meeting.

Can’t make the meeting? Email us your questions/concerns or add them below in the comments.

Two neighbors on Midvale, two different Mexican towns. Lots of cool opportunities for the rest of us!  [more…]