Portico Street’s not-so-secret weapon against trash, graffiti, and negative vibes also has a flair for the festive, as we found out on the 4th of July. 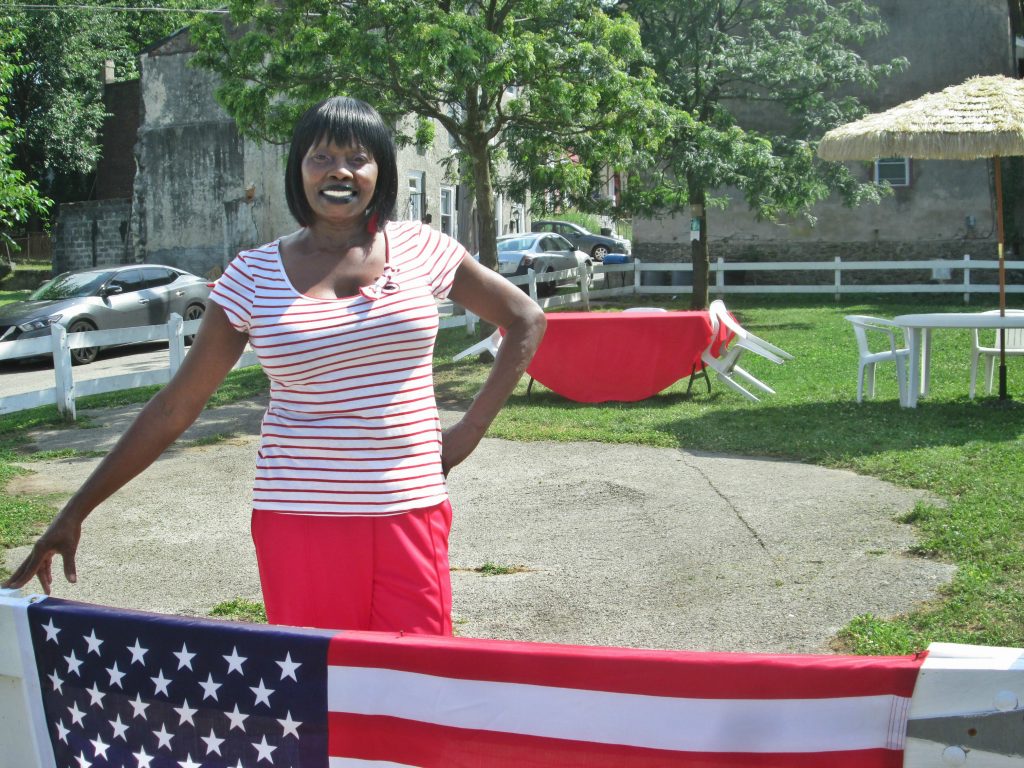 The 5000 block of Portico Street was decked out in red, white, and blue for the 4th thanks to a beloved neighborhood dynamo – Block Captain Gloria Blair. Known to neighbors as “Brown Sugar,” Ms. Gloria has served as a Portico Street block captain for over 30 years, tirelessly advocating for local youth as well as a pleasant and livable block for her neighbors. When she’s not getting rid of graffiti, picking up trash, or taking kids to special events, Gloria loves to organize neighborhood parties and beautify the block. (Special thanks to Allison Weiss, president of SoLo/Germantown Civic Association, for sharing these pics of Gloria’s patriotic decorations.)

Although this year’s 4th of July celebration was a bit smaller than usual (for almost 30 years Gloria has organized the block party, which featured multiple BBQ stations, tunes by one of her sons, Charles – who goes by DJ Razor – and a water slide and trampoline, courtesy of her other son Demeatris) neighbors still mingled while kids enjoyed food provided by the city of Philadelphia’s Summer Meals program. Run by Reger Street Block Captain Tracey Dobb, the program kept the kids happy and active.

The holiday’s behind us, but that hasn’t slowed Gloria down – in fact she’s recently worked with her neighbors to paint the curbs on the block white. Why? “They just look neater that way. It makes the neighborhood feel clean,” she said. “It’s amazing what a broom and a coat of paint will do for a block.”

More to come about Gloria. Stay tuned to nwlocalpaper.com for a feature about this long-time community advocate, whose stories include cameos from Joe Frazier, Teddy Pendergrass, and other Philly legends.

If your community could use summer meals for the little ones, contact the City of Philadelphia Summer Meals program at 855-252-6325 or Text “FOOD” or “MEALPA” to 877-877. You can also visit phillysummermeals.org for more info.

Gloria would like to thank the following volunteers for contributing their time and property to making the 4th of July event (and the Summer Meals program) a big success in the neighborhood.