The Local paper’s new Germantown editor shares his dreams for a real community newspaper that addresses the neighborhood’s needs. 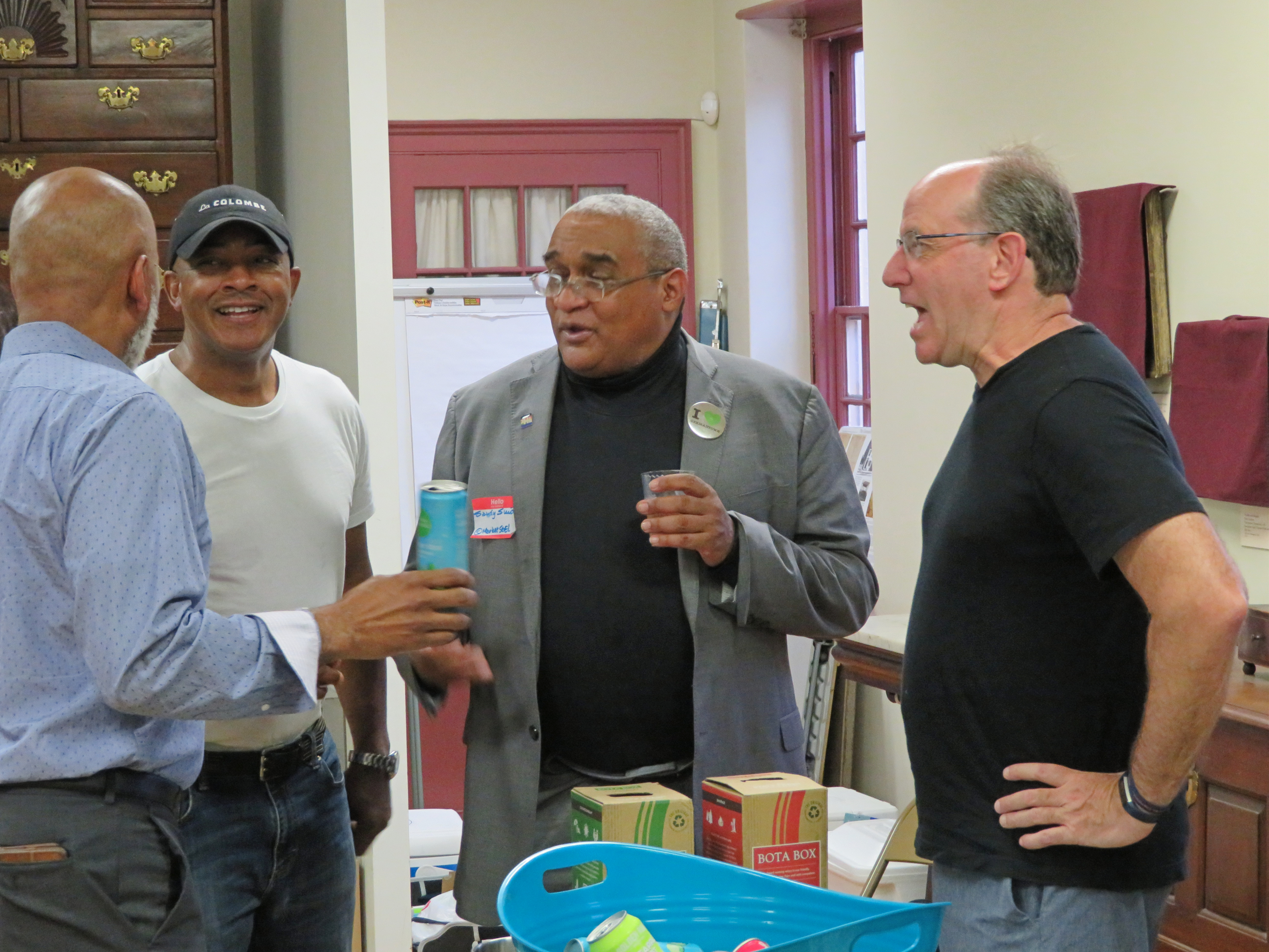 Thursday, June 13th was a great night. About 20 neighbors came out for our first Meet & Greet for the Local paper, where we introduced Sandy Smith, the well-established and highly-regarded city journalist (currently working at Philadelphia Magazine) who is taking the reins of our Germantown coverage.

Sandy’s knowledge, contacts and sources will help us tell stories no one else is telling – and his insights as a Gtown resident can provide context for what’s being reported about the neighborhood in bigger news outlets.

And he’s a real wordsmith, too – even off the cuff, as you can see in this video. We asked him to “say a little something” and what followed, we think, is totally worth sharing here word for word. We hope you’ll find Sandy as smart, warm, funny and community-minded as we do.

Sandy Smith: Boy, that was an elaborate introduction.

Sharrieff: It was good enough for Johnny Carson.

Sandy: Yeah but they put that in a context. So I guess I gotta give you the context. My name is Sandy Smith. My day job? I’m the Home & Real Estate editor for Philadelphia Magazine. Some of you may have seen my pictures of drop-dead gorgeous houses, or my reporting on people who are doing good things including in this neighborhood, one of whom is here tonight. Hi, Ken.

But I call myself a Forever Kansas City-an and adopted Philadelphian. Who here has lived in the neighborhood longer than six years? (about a half dozen hands go up) Okay, all of you have lived here longer than I have. But I’ve been six years in this neighborhood and I took a liking to it pretty much right after I moved in – and I live on the beat-up side of it.

When I moved to this city 37 years ago, I took the 23 trolley up here. And I walked around the neighborhood and I thought, “This is a pretty cool place, it has this counter-cultural vibe.” It still does. And I think that’s one of its strengths. This is one of the most diverse neighborhoods in the city. Not just racially but socio-economically – especially socio-economically.

So I’ve been doing journalism since I was in high school, about 40 years ago – no, excuse me: 50 years ago. And a few years ago, I got hired at Philly Mag. I love what I’m doing. But when they interviewed me, they asked me the question people usually ask applicants, “What was your ideal job?” And I told them, what I’ve told everybody else: Editor of a small community newspaper.

I heard about a year and a half ago there were people in Germantown lamenting the loss of The Germantown Courier, and believed that this neighborhood needed and wanted a real community newspaper again. I heard there was a meeting being planned, and I thought this was something I should be at. I also heard that they thought I should be there, too.

Well I didn’t make that one. But about six or seven months later, I ran into Sharrieff – and I know Sharrieff from when we were both over in University City. He was living in Spruce Hill, I was working at Penn. I told him something I’d done to explore options for starting up a community newspaper and he said, “Well, you need to talk to Steve and Carolyn, cause they’re interested in beefing up coverage of Germantown. Let’s meet at their place.”

So the next day I was at their place. And Steve and Carolyn said Hello and “Yes we remember meeting you – it was at Billy Murphy’s Irish Saloon, and you were getting snockered with your landlord!” This somehow did not dissuade them from thinking that I would be a good person to revive community journalism here. And I actually relish the prospect.

It’s 80% Black. I couldn’t tell that by looking at you-all. This is one of the things I like about the neighborhood, and I think a lot of people like about Germantown, too.  And I know there’s lots of things going on around here – good, bad and controversial.

And the loss of the Germantown Courier means there really is no one reporting on it. Steve and Carolyn have been doing a very good job of beefing that up. But they can’t do it alone, they thought I would be a good person to help them along. And I’m ready for the job. But I can’t do it without you-all. Because the fact of the matter is I’ve still got my day job, and I’m not giving that up. And the fact is, most of us reporters, we don’t report on stuff we don’t hear about.

We attend meetings if we know about them. We may follow certain subjects as a way to keep informed. But to be a true community newspaper editor, you have to do more than follow your favorite subjects. You have to do more than just show up at those meetings. You have to hear from people. You have to hear from them, “This is something we should pay attention to. This is something that’s going on, do you know about it This is a good thing happening here. Why is nobody talking about it?”

You tell me. I can’t guarantee you it’ll get in the paper, but you can be sure if you don’t tell me about it, you will never see it in our print or social media. And if you do tell me, then there’s a good chance it will.

Steve and Carolyn are kind of unusual in how they run a neighborhood newspaper. It does not have the tone and style of a typical community newspaper. It’s more like a conversation in your living room, “This is what we saw. This is what we think about it. What do you think?”

A community paper should be a mirror of the neighborhood. Tell me what you think I should be paying attention to. What we need to reflect back for everyone to see. Show me who’s doing good things, and who’s not. <hear hear!>

A community newspaper is supposed to be about all of that. This is the largest single neighborhood in Philadelphia, we’ve got about 65,000 people living here. That’s more than live in Lancaster, and they have a daily paper. So there’s definitely potential here.

So tell your friends and neighbors! There’s a new news source here. And we aim to cover Germantown like a blanket.

Thanks to everyone who stopped by – especially those who took a moment to pass us their contact info or throw a story tip in the suggestion box. Next Meet & Greet is Thursday July 11th – same time (6:30 – 8PM), same place: Historic Germantown’s headquarters on Market Square, 5501 Germantown Ave. We’ll aim for the beautiful courtyard but if it rains we’ve always got their meeting room full of cool local toys, furniture and other artifacts.

Mark Your Calendar! Free community Happy Hour every 2nd Thursday, hosted by the Local in Historic Germantown. Chat with Sandy, meet your neighbors, share some story ideas, enjoy an evening out.

Thanks for your support! Here are three ways you really can help the Local Paper: