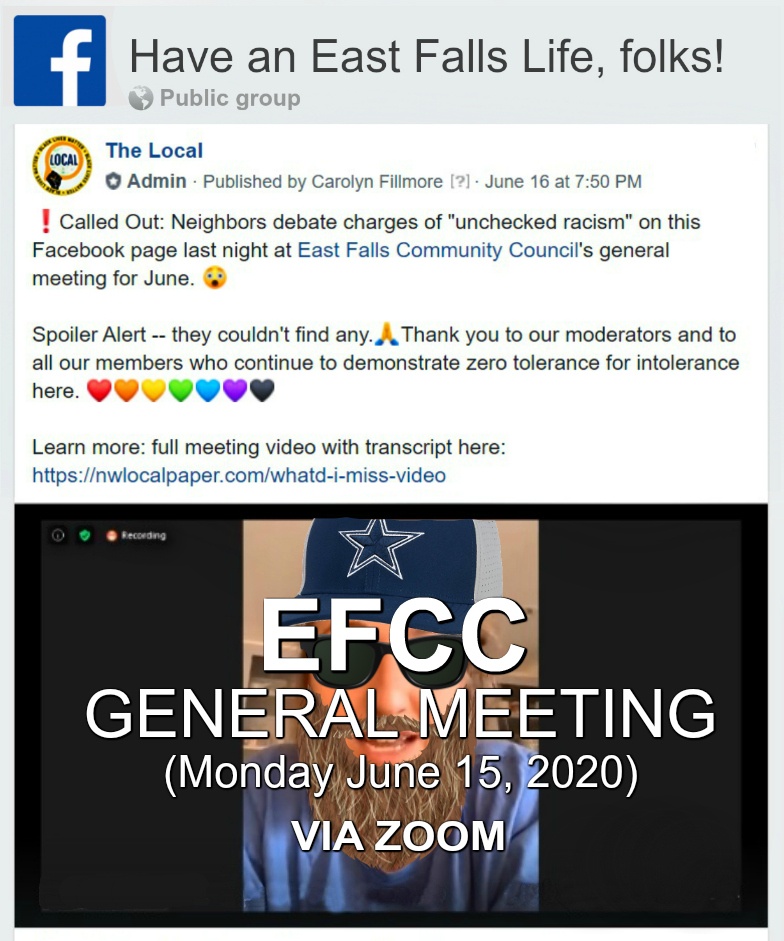 Racial tensions exposed by this summer’s Black Lives Matter movement boiled over in East Falls’s biggest community Facebook group, the “Rants Page” which for now is going by “Have an East Falls Life, Folks!” – don’t ask, you had to be there.

Or maybe not. Is it funny that someone got their panties in such a bunch over BLM that they announced their departure with a comically indignant flounce that amused remaining members so much they re-named the group after it’s catchy final line? You decide. Facebook makes you wait a month between group name changes, so we’ll have to live with it for awhile regardless.

Anyway – neighbors got ugly on Facebook, and for a week or so Admins were up to their eyeballs in flagged rants, comments, links, memes, profiles…. About a dozen members were purged from the page for refusing to acknowledge basic human rights or offer even a little sensitivity in a time of national shock and mourning. TRUE STORY: EF’s history is racist AF, and there’s still a lot of that legacy lingering here beneath its reputation as a “hidden gem” and a “great place to raise a family.”

Not so great for everybody, evidently. There’s a small but stubborn cabal here who glorifies Rizzo, thinks All Lives Matter and seriously believes the last generation of Fallsers “saved” the neighborhood from black people. Not that they’d consider themselves racist! In fact, they will often tell you they don’t see color at all…. 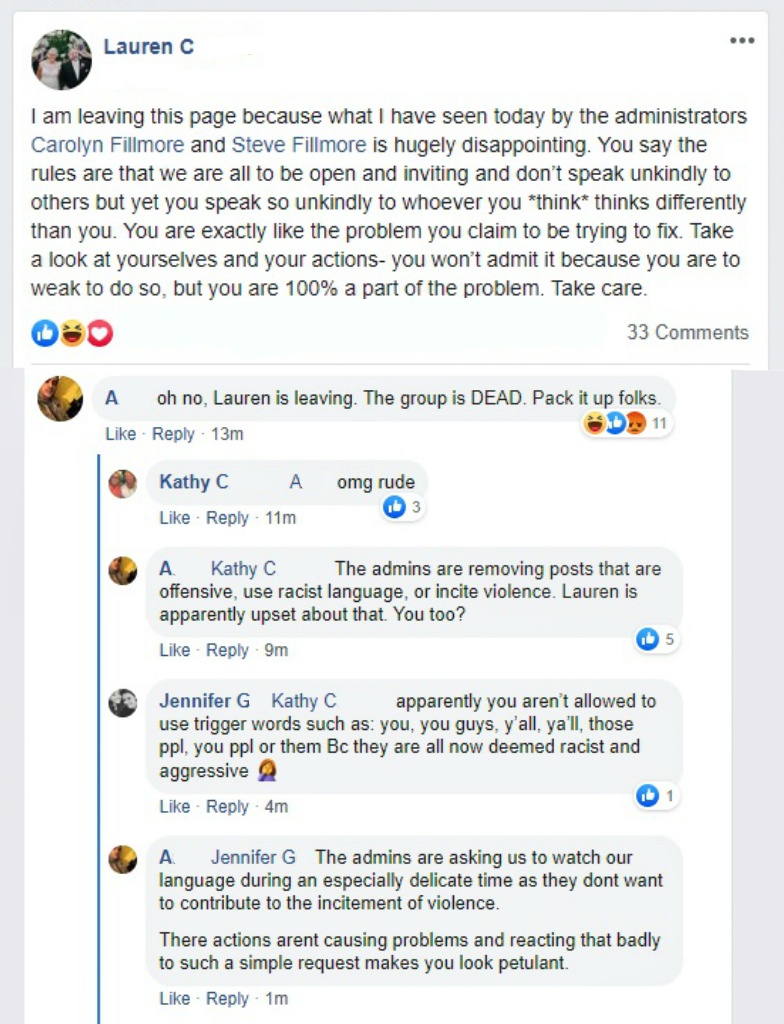 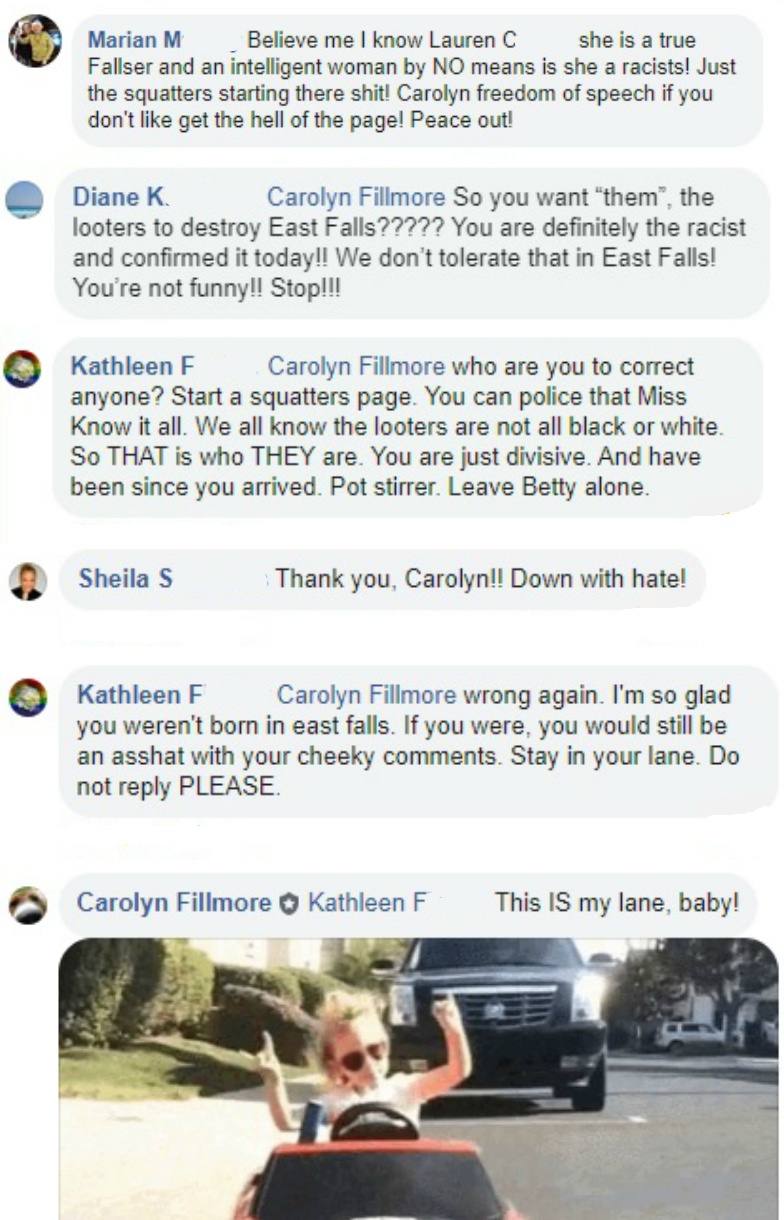 They don’t want to hear about red-lining and discrimination, they don’t care they’re on the wrong side of history. God knows they have no idea all the great people, stories and experiences they’re missing out on! But whatever. Trolls gonna troll. We’re trying to let people talk without supporting toxic narratives. We think a good community Facebook page supports debate and even disagreement – but not bullying or belittling or dog whistling. No wonder the East Falls group has more than a dozen moderators!

And no wonder that when EFCC decided to step into the Black Lives Matter movement this June, our community Facebook page was an easy target. Members meeting via ZOOM agreed to join and “directly report” all the “unacceptable” posts after a brief discussion about “unchecked” racist dialogue on our page, and how it’s “not OK” for neighbors to share this stuff.

Aww, come on! No mention of all the moderators and members who effectively ran the racists off? No one noticed the clear rules pinned to the top of the page? They tried calling Steve out as an admin but we were not attending in real time. Skimming through the recording later that night, we had to laugh and shake our heads. Really?

After drafting a new Mission Statement on racial equality, this is where they start? Policing a community Facebook page?

Look, fellow white peeps, we all have our blind spots. We are not trying to shame or even blame EFCC. However. If the members are serious about confronting racism in East Falls, how ‘bout they start where they can make the most impact: with their executive board members, policies and attitudes. How’s their practical standing on inclusiveness, diversity and equity? Let’s see…

EFCC’s record with affordable housing is problematic to say the least: they’ve sued PHA to try to limit market-rate units, and they typically bend to neighbor pressure to block zoning for new rentals. Regarding law enforcement, for years the EFCC called the police on black kids panhandling at the old A-Plus station – and encouraged neighbors to do the same.

Their interactions with Abbotsford and RAH leadership have been historically contentious. We’ve heard a lot of tone deafness regarding Mifflin and McMichael. And a ton of denial about all this stuff mentioned here. 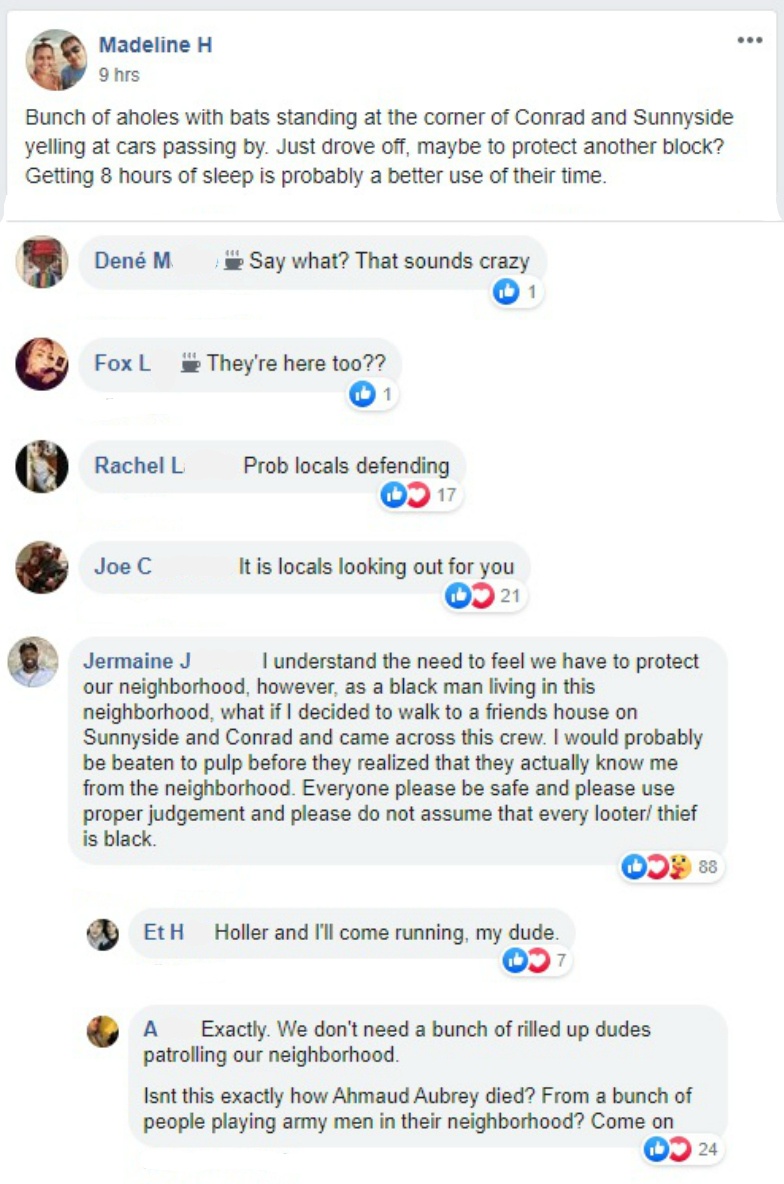 Case in point: why are they looking at us? To hear them talk at June’s meeting, it sounds like they feel racism is an “other people” problem:

“Because the people who need to hear this aren’t going to be the ones in the room. That’s my fear. “  — MaryAlice Duff, EFCC VP (Events)

“If those people were going to be in the room, this would be really easy. “ —Bill Epstein, EFCC President

Guys: whatever you think “the people” need to hear – that’s irrelevant. Your mission (should you choose to accept it) is to figure out what EFCC needs to hear. Reflect on rules, decisions and policies. How diverse is the organization, and why? How might this change to better accommodate and represent an inclusive East Falls? Could EFCC better model and facilitate productive, respectful debate at meetings?

Just sayin’. We’re no experts on Unconscious Bias  — although we did get a grant for training last year. Our big project was cut short by COVID but we still did a ton of reading and research. There’s lots of ways white people can work on racial bias, but they all tend to demand the same first step: self-examination. 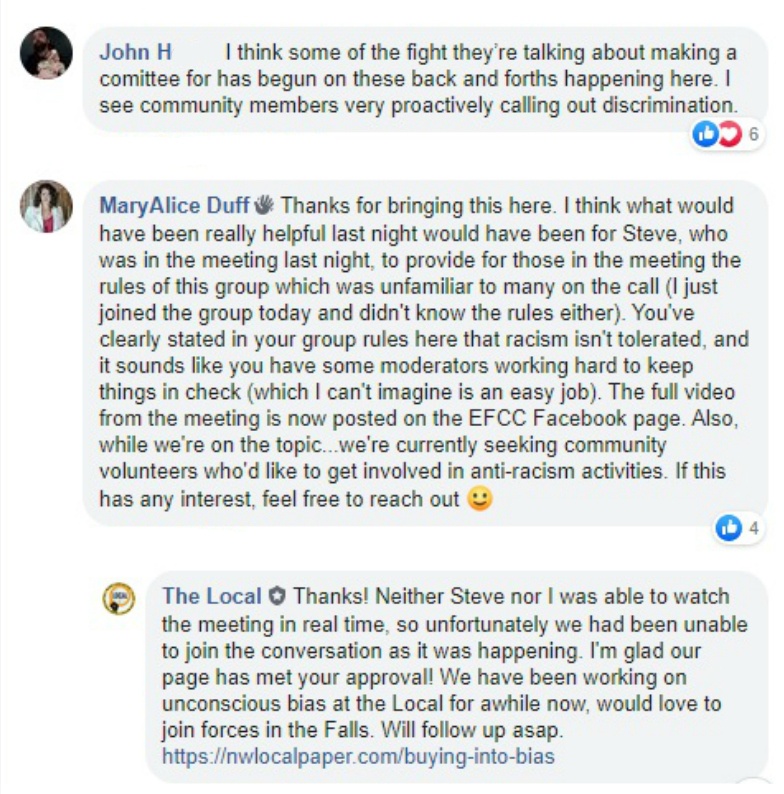 Speaking of steps, combating racism has been compared to working a 12-Step program for an addiction. In that, we’re never “cured,” we need to commit every day, and we always need to be vigilant against falling into old mindsets that limit our experience of the world, and our understanding of each other.

Because let’s be clear: fighting racism isn’t an altruistic act. Inclusiveness benefits all of us. Every community, every business, every organization. Humans learn best when we learn from each other. Studies show when diverse communities cooperate, businesses are more profitable, art and education thrives, neighborhood planning and development is more innovative and equitable.

Psychologically, too, we’ll be a healthier society when we can properly heal from the trauma of centuries of slavery and violence. It’s our duty to face the sins of our nation’s past; it’s the right thing to do. Times are changing, census demographics are tipping to project a non-white majority in the US by 2045. Here’s a chance to leave a better legacy for the next generation to build on. Imagine how much fuller American life can be, when our society uplifts and inspires everyone.

Join East Falls’s biggest public Facebook group for spirited neighborhood discussions with 3,800+ members having an East Falls Life, folks. We hope to see lots of events, workshops, meetings and other opportunities for white people to learn how to push back at segregationist systems limiting all of us.

We at The Local have a lot of work to do, too. Let’s use our different vantage points to call each other out and fill each other in on perspectives we might otherwise miss in our own echo chambers. We don’t have to agree on everything to promote human rights in the neighborhood. Thank you for your fair and honest feedback.

We’ve been recording EFCC meetings since 2014 but apparently our coverage has once again hit a nerve.

It’s fine! We are happy to go over this as many times as we need to: WE DOCUMENT EFCC MEETINGS AS A PUBLIC SERVICE TO THE COMMUNITY.  To everyone who appears in the video: thank you for participating in civic process in our neighborhood. This kind of work can’t be done behind closed doors.

FYI: Philadelphia RCO’s are required to hold public meetings. And it’s totally legal to record them – you don’t even have to tell people they’re being recorded! Technically it’s the meeting chair’s job to announce this, which Mary Alice does at the beginning of the call and which anyone can see by the red blinking “RECORDING” icon.

So everyone knew this meeting was being recorded. It would be quite an accusation to claim the community’s trust and privacy has been violated simply because we were able to obtain our own copy of the same, exact recording — but that’s precisely what has happened. To our confusion and disappointment.

Why isn’t EFCC glad we’re helping to disseminate their message? That’s what public meetings are for, right? It’s our understanding that informed neighbors are a good thing. This reaction to shut us down is truly puzzling. And pointless — it’s not like we’re going to stop documenting community meetings. Independent news is vital for democracy, and it’s our job! Can’t help wonder why would EFCC want to undermine our ability to report on important discussions and decisions that directly affect us and our readers……..

NOTE: We took care when compiling the video posted on this page to be as clear as possible, so nothing can be taken out of context. Still, people love to make room for doubt so we’ve shared the entire meeting with full transcripts on our website. Please let us know if you feel we’ve misrepresented anything.

The following unexplained incidents have been reported in East Falls, Germantown and environs. [more…]