How can a hidden path commit an act of aggression? 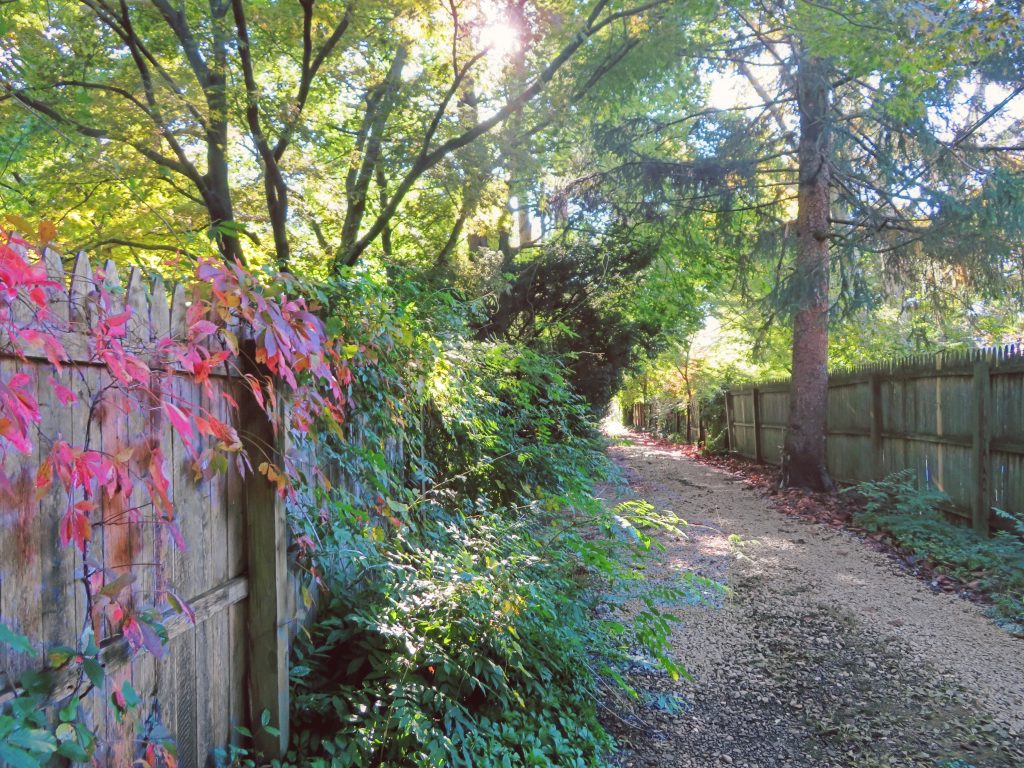 I’ve lived in East Falls for almost twenty years. Now I live closer to the sprawling properties near Penn Charter than I do to the row homes on the streets that rise up from Kelly Drive. Wherever you live, East Falls is great for walking and running. On cold, dark, winter nights I love to peer into the windows of the tiny gingerbread houses near Mifflin Elementary.

I avoid Henry Avenue. It’s so dangerous. Everyone drives so fast. And there are definitely places I avoid when it is dark. I don’t know if the world has changed a lot, or if I have, but I feel more vulnerable as a woman than I once did.

Maybe my favorite thing about walking around East Falls is the way I can easily imagine the forest that once was. And though I was not raised in East Falls, I can also imagine my great-grandparents, immigrants from Ireland, who lived in a carriage house that was attached to the property of one of the wealthy families for whom they worked.

You can smell a forest even when the exhaust fumes are strong, which they often are because the other thing about East Falls is its proximity to so many thoroughfares. It is a cross-section of Philadelphia, literally and metaphorically. The pandemic has lessened the noise and the pollution, but it is always there with the scent of the forest.

Recently, I discovered a kind of hidden road. I guess it is a private driveway, but it is the kind you can enter on one street and exit on another. I’ve been walking past it, from two different entry points, for almost two decades. Some of the sprawling houses back up to this grassy, gravelly, and really beautiful path.

On this path, I feel even closer to that foresty feel than I do in any other part of East Falls. It’s quiet and there are different kinds of lives I can peer into from the vantage of their hardscaped and beautifully lit backyards. East Falls is home to a lot of power brokers. Of course, there is former Governor Rendell, always a man of the people, known for haunting the Rite Aid on Midvale.

But there are others. I don’t know them or even their names. But on this woodsy, quiet, hidden path I feel like can see into their worlds just a bit. I’ve always been an observer of lives that are different than mine. I am equally curious and likely to walk around, or least drive around, some places that are considered quite the opposite and quite unsafe.

But tucked away on this secret path, I feel welcome, even embraced by nature and even by the neighbors who sometimes appear. They shush their dogs who bark at me, the trespasser.

At least I did feel all of this. For a moment.

Then one day, soon after I found this path, I was overcome by dread when I imagined myself as a Black boy or man walking this path. I realized it probably never happens that a person of color whimsically decides to take such a sightseeing tour, no matter the Black Lives Matter signs that may well sit on the front lawns of these homes.

I imagine a medical student from Jefferson, a young Black man, himself raised in a house as grand as any of these, calculating the risk of this pleasant-looking shortcut. He and I both know that were he to be spied from one of the windows, he would almost certainly be carefully observed and watched. A spy might even contemplate a call to the police.

It occurs to me, this condition of life in America is neither a pure example of systemic racism nor is it an example of a microaggression. Because how can a grassy path commit an act of aggression? Whether a spy is home or happens by the window, matters not. Because for him, the air itself, the trees, the hardscapes, the dogs, are in on the conspiracy to sideline his Black life.

Now I keep walking the path, not for the greenery but because the path helps to keep me in the presence of the conspiracy.

This piece has been excerpted from “The Conspiracy of the Private Driveway” (Sept 2020) read the full essay on Medium.com.

Sleeping with the Lights On

East Falls neighbor George Anderson wakes us up to 5G’s assault on our health, environment and privacy. [more…]