Is this any way to conduct community outreach?

If you’ve been around this neighborhood for more than a minute, you probably know who Connie Winters is. In addition to owning a good chunk of the commercial real estate along Chelten Avenue*, she is also a high-profile supporter of President Donald Trump.

That support has made her the target of criticism from many Germantowners. But it’s a free country still, at least for now, and she’s as entitled to her opinion as the Black men I’ve spoken with on my side of Germantown who agree with her do.

Which is why, when Winters approached us about doing a story on the Black Voices for Trump support group, I agreed to write it. We may have a definite voice and point of view here at The Local, but we also believe that in an election, especially a hotly contested election like this one, our readers deserve to hear from all the candidates and the people who want to make the case for them.

But instead of reading that article, you’re reading this now. Here’s why, and I think the reason why says something about the Trump campaign too. I’ll leave it up to you to determine what that is.

After Winters made her suggestion, she offered to put us in touch with a woman named Erin Johnson, who she said headed the local Black Voices for Trump effort. My colleagues Steve and Carolyn Fillmore then contacted her to let her know I would be reaching out to arrange an interview.

After that initial contact, Johnson then demurred, saying that as she was part of the Trump campaign, she couldn’t comment for publication. Instead, she said we should speak to a volunteer. Said volunteer never materialized, and further calls from both the Fillmores and me went unreturned. 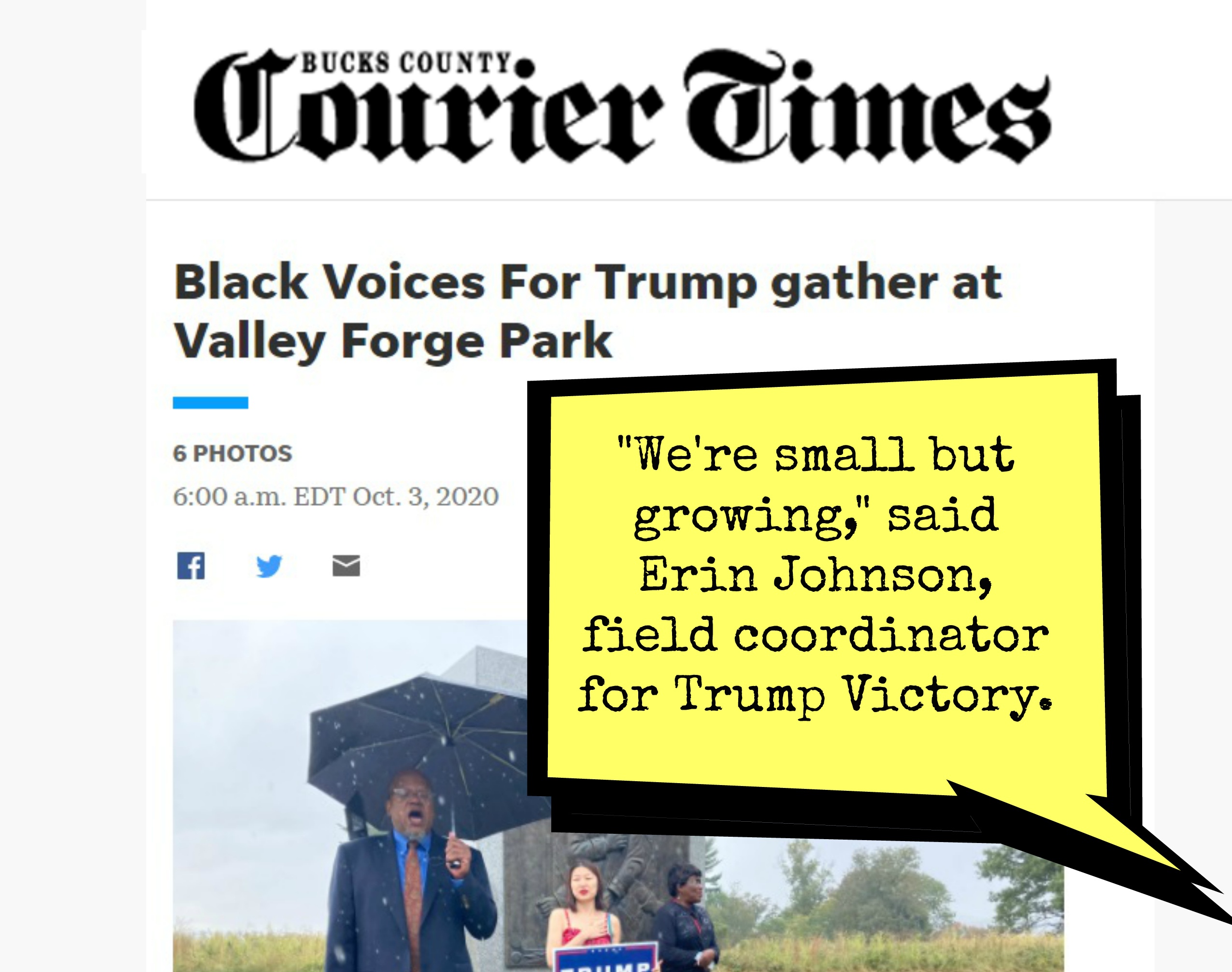 What’s wrong with this picture? First, there’s the odd spectacle of someone whose job it was to encourage more people to vote for Trump refusing to speak to someone who could offer her an opportunity to do so. Second, Johnson has been quoted for publication before; she figures in a story the Bucks County Courier Times ran on a gathering of Black Trump supporters in Valley Forge at the beginning of this month.

While I’m not about to make it, a case can be made for Black voters to support Donald Trump. One of the few real recent advances in criminal justice reform, the First Step Act, became law during his first term as President with his support. African-American unemployment reached historic lows during that same time period, and since the current Oval Office occupant usually gets either credit or blame for economic developments on their watch, Trump gets credit for this. And the “Platinum Plan” he announced on Sept. 25 contains a number of strategies for Black economic empowerment that are worthy of consideration. Rapper Ice Cube helped draw up the plan, and he too is getting flak for having done so.

Given all this, one would think that the person in charge of raising Black Voices for Trump would want to amplify her own and theirs. I guess I was wrong about that. So at least in this case, if you hear someone complaining about the news media not giving Trump a fair shake, they can’t say we didn’t try.

Black Voices for Trump
245 W. Chelten Ave, back office
(We’ll update with local contact info/social media as soon as we can track it down)

The Local paper’s new Germantown editor shares his dreams for a real community newspaper that addresses the neighborhood’s needs. [more…]