After decades of neglect, historical preservationists intervene to save Mt. Vernon

Mount Vernon Cemetery, at Ridge and Lehigh Avenues, opened in 1856, during a time when rural garden cemeteries began to replace inner city and churchyard cemeteries. In fact, thousands of bodies – including some from as far back as the 17th century — as well as several Revolutionary War heroes — were reinterred at Mt Vernon in 1867 when the Second Presbyterian Church burial ground on Arch Street closed.

For years Mt Vernon was owned by a lawyer named Joseph Dinsmore Murphy. Murphy inherited the cemetery from his father. In the 1960’s Mount Vernon stopped selling new cemetery plots. You could only be interred there if you had an existing deed to a plot. As years went by the cemetery became neglected, overgrown with vines and weeds, and fell into disrepair. 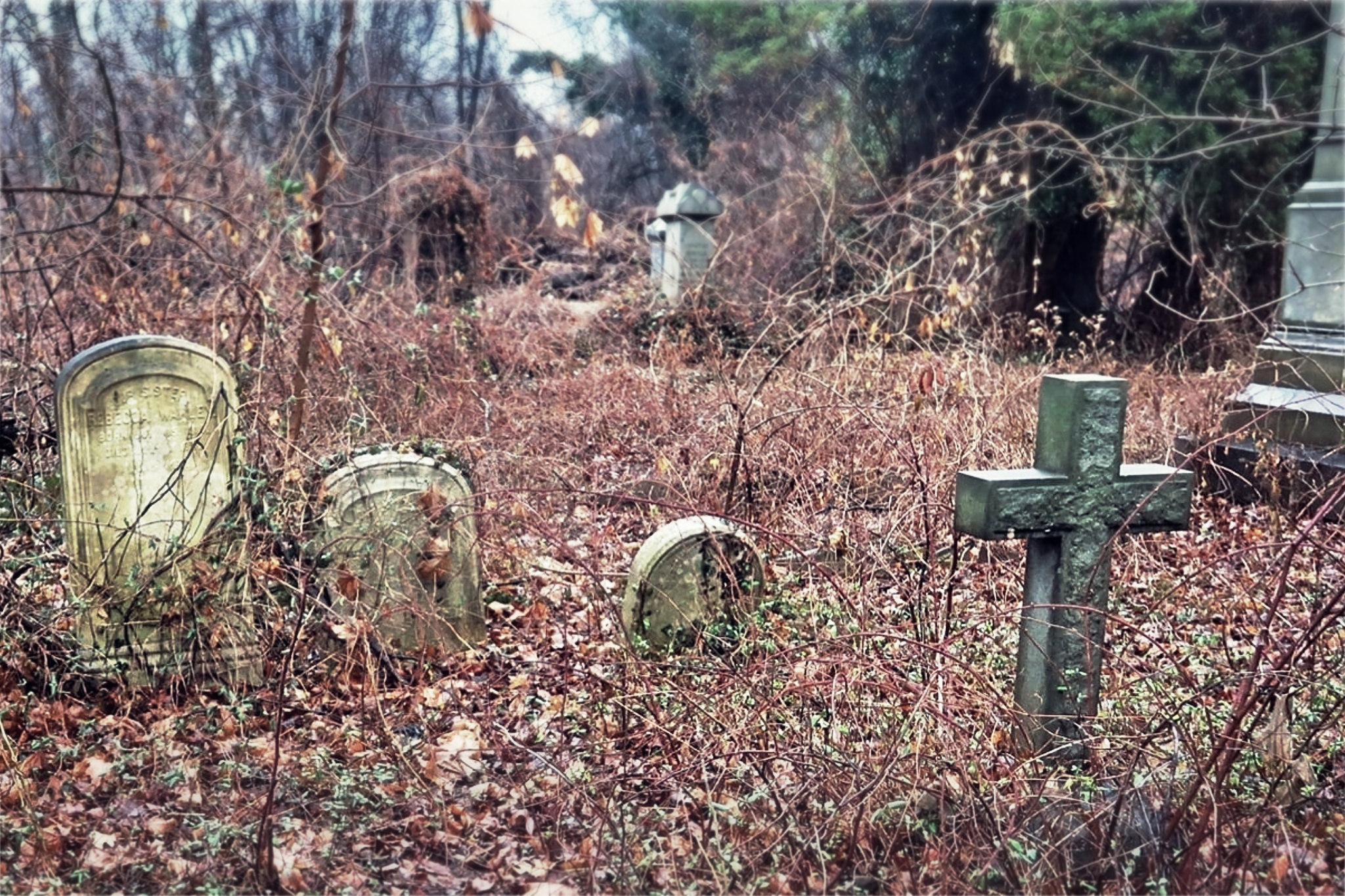 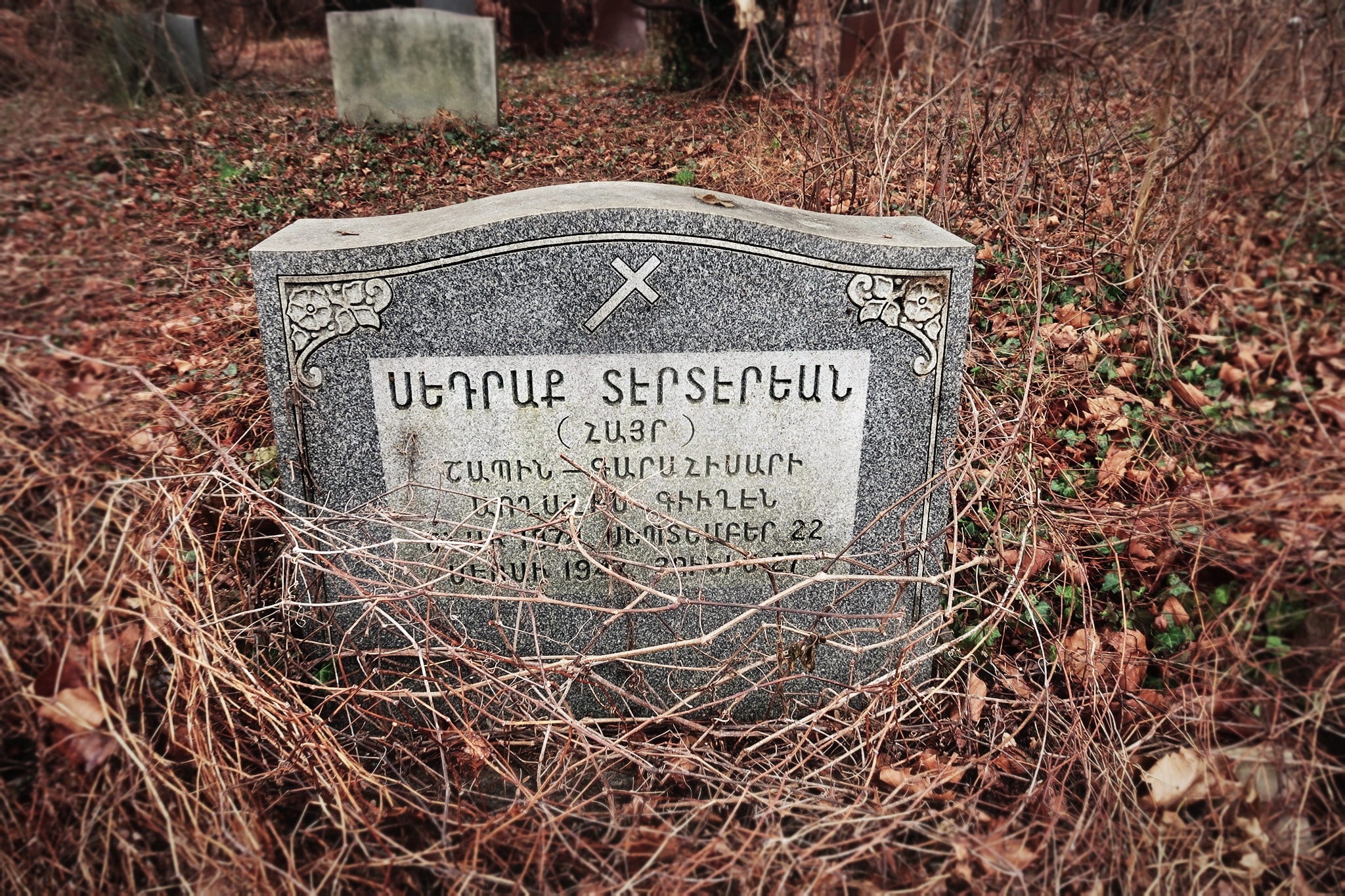 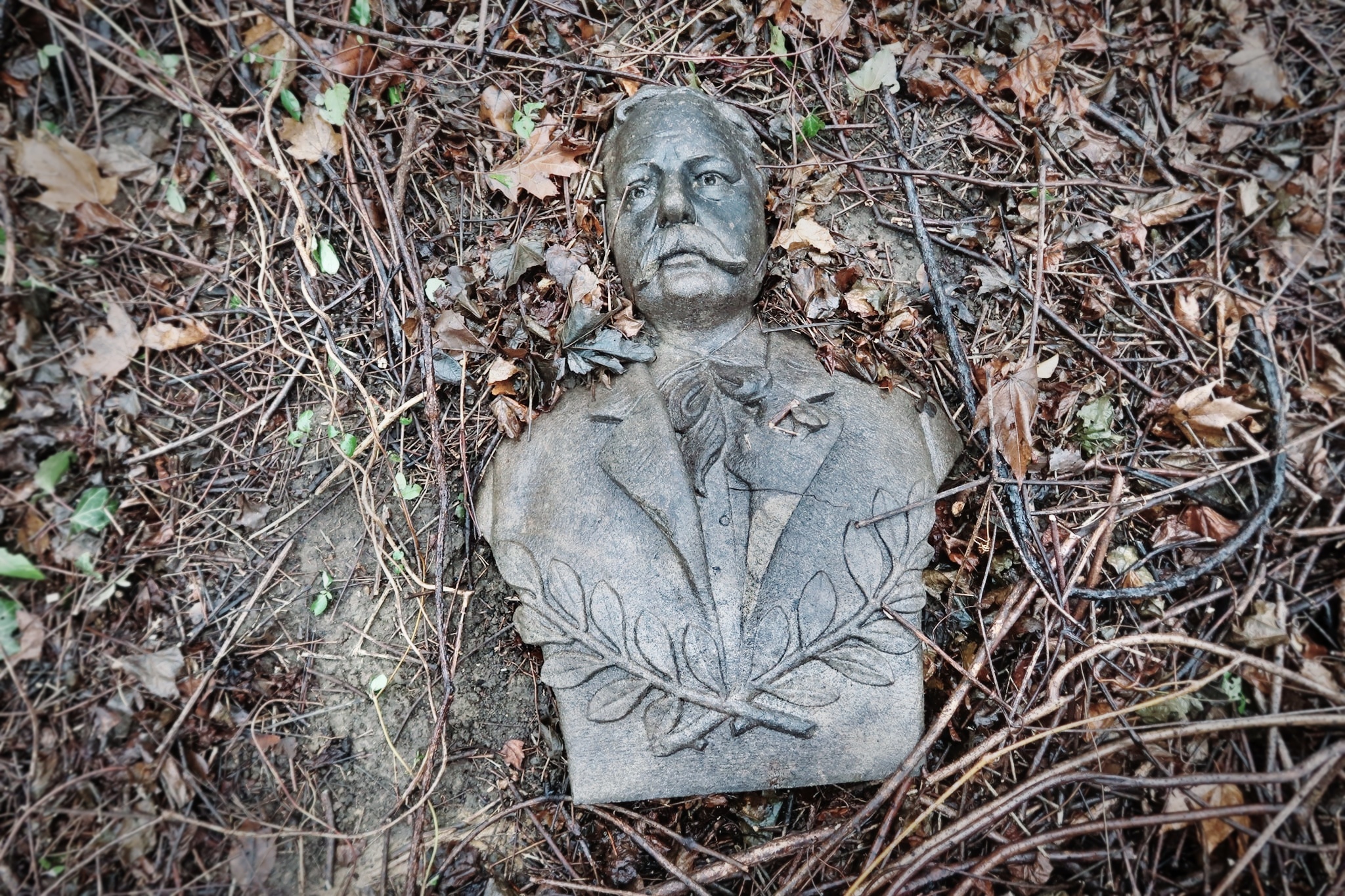 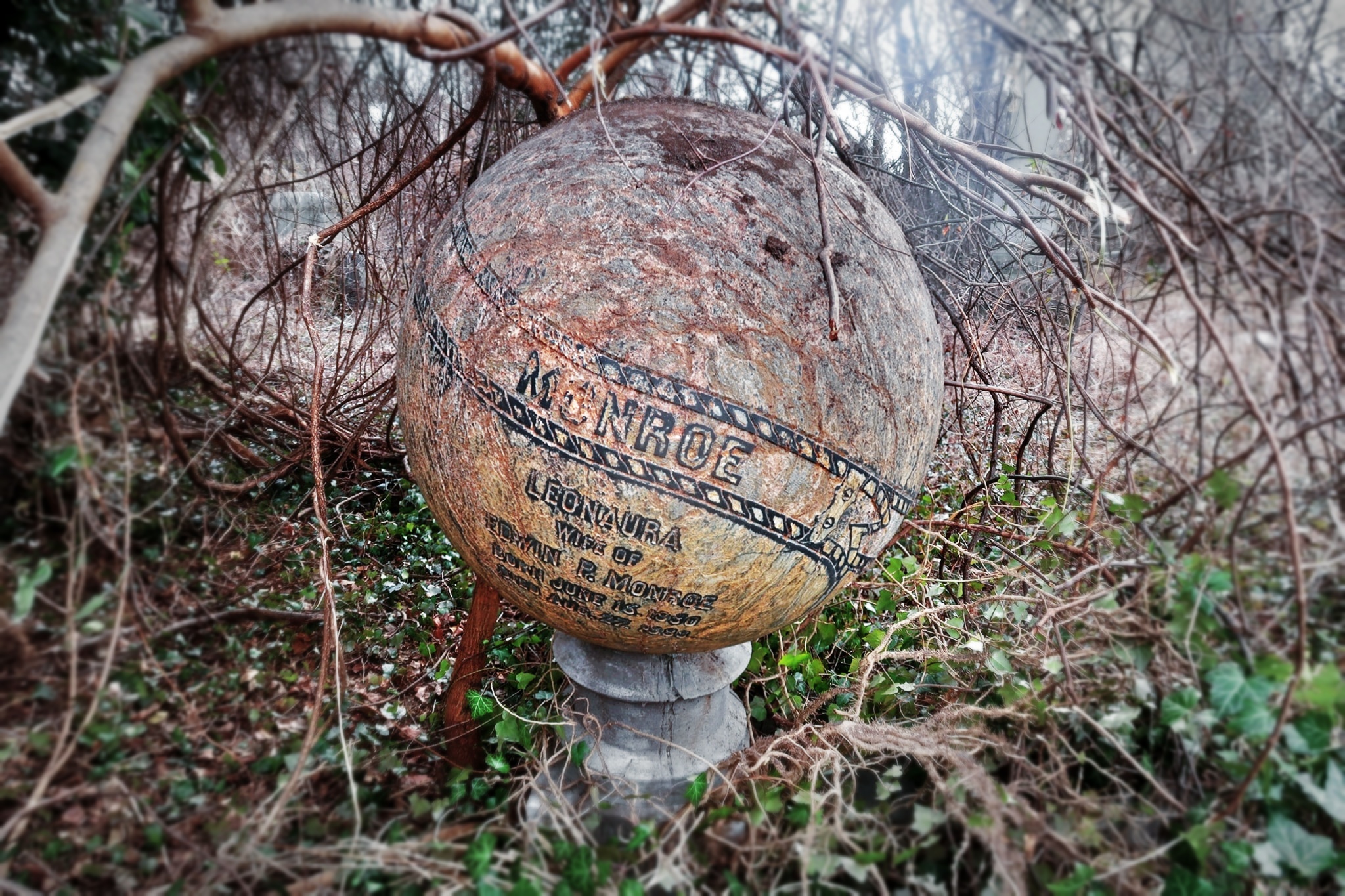 For years, many people have sought to save this gothic beauty from its current fate. It seems that the cemetery was destined to stay in its perpetual state of decay. However, in June of 2021, a group of historical preservationists gained control of Mount Vernon through Pennsylvania’s Abandoned and Blighted Property Conservatorship Act 135. A Philadelphia judge appointed the Philadelphia Community Development Coalition to act as Conservator for Cemetery.

Their duty is to provide landscaping and repairs to Mount Vernon, until a long-term steward is appointed. To fund their efforts, the Mt. Vernon Cemetery Conservation Company, Inc. (mountvernoncemetery.org) has launched a campaign page aimed at raising $200,000 in charitable pledges. These funds will be used by the conservatorship to make necessary repairs and clean up the cemetery, until a long-term steward is appointed.

Although no new cemetery plots have been sold since 1968, there is a significant amount of unused land, which has the potential to be used for future interment of cremated remains. Other future plans are to have historical tours, gardening programs, and other events.

Many notable Philadelphians are interred in Mount Vernon. Louisa Lane Drew was the matriarch of the Drew & Barrymore family. The Drews owned the Arch Street Theatre, where they staged performances. Louisa Lane Drew, known as “The Duchess,” managed the business and her family.

Drew’s grandson, famed actor John Barrymore, is also interred at the cemetery. (His grave was unmarked until 1992, when fans had a stone installed which had engraved upon it, “Alas poor Yorick” in a reference to his stage performance of Hamlet.) John Barrymore is the grandfather of actress Drew Barrymore. In 2018 Drew made a secret visit to Mount Vernon to see her grandfather’s grave.

Mount Vernon was the cemetery of choice for many Philadelphia brewery owners and their families. Brewers, such as the Bergdoll, Sauers, and Newhouse families are residents of the cemetery. Descendants of these families have contributed to the restoration efforts at the cemetery. On a visit, you may meet a Bergdoll or Newhouse and maybe share a good story.

A Unique Work of Art

The centerpiece of Mount Vernon is the famous Gardel Monument. A 25-foot brownstone pyramid that contains mourning sculptures from around the world. Bertrand Gardel and his wife Julia Hawks Gardel were Philadelphia school teachers. In 1859 Julia died in Damascus, Syria after being attacked by Bedouins while on a world tour.

With her death, Bertrand wanted to pay tribute to his wife and her love of the world, so he commissioned noted Philadelphia architect Napoleon LeBrun and Belgian sculptor Guillaume Geefs to create this moving tribute. Representatives of Europe, Asia, Africa, and America were present at her funeral in Damascus, hence the artist’s idea of a funeral procession. 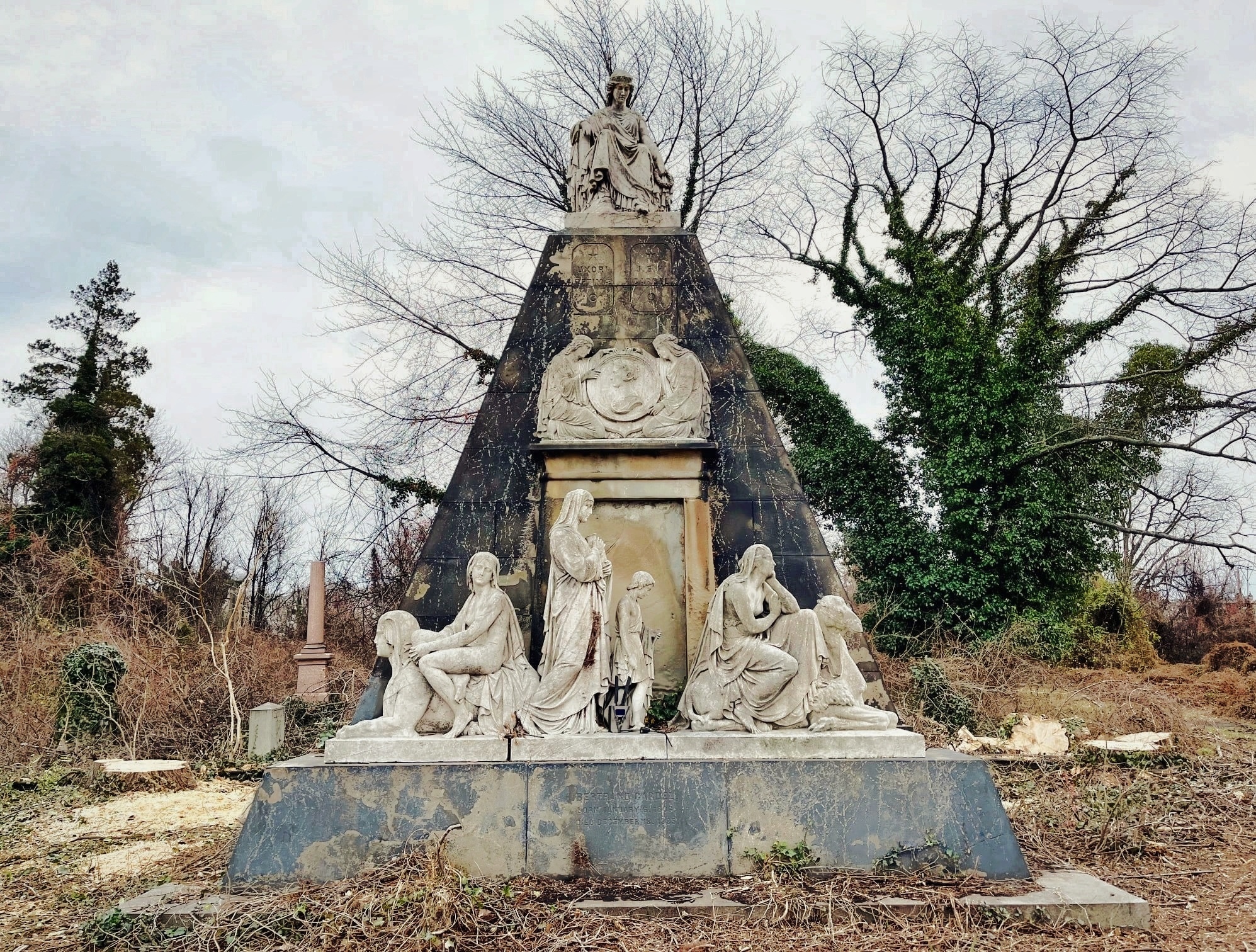 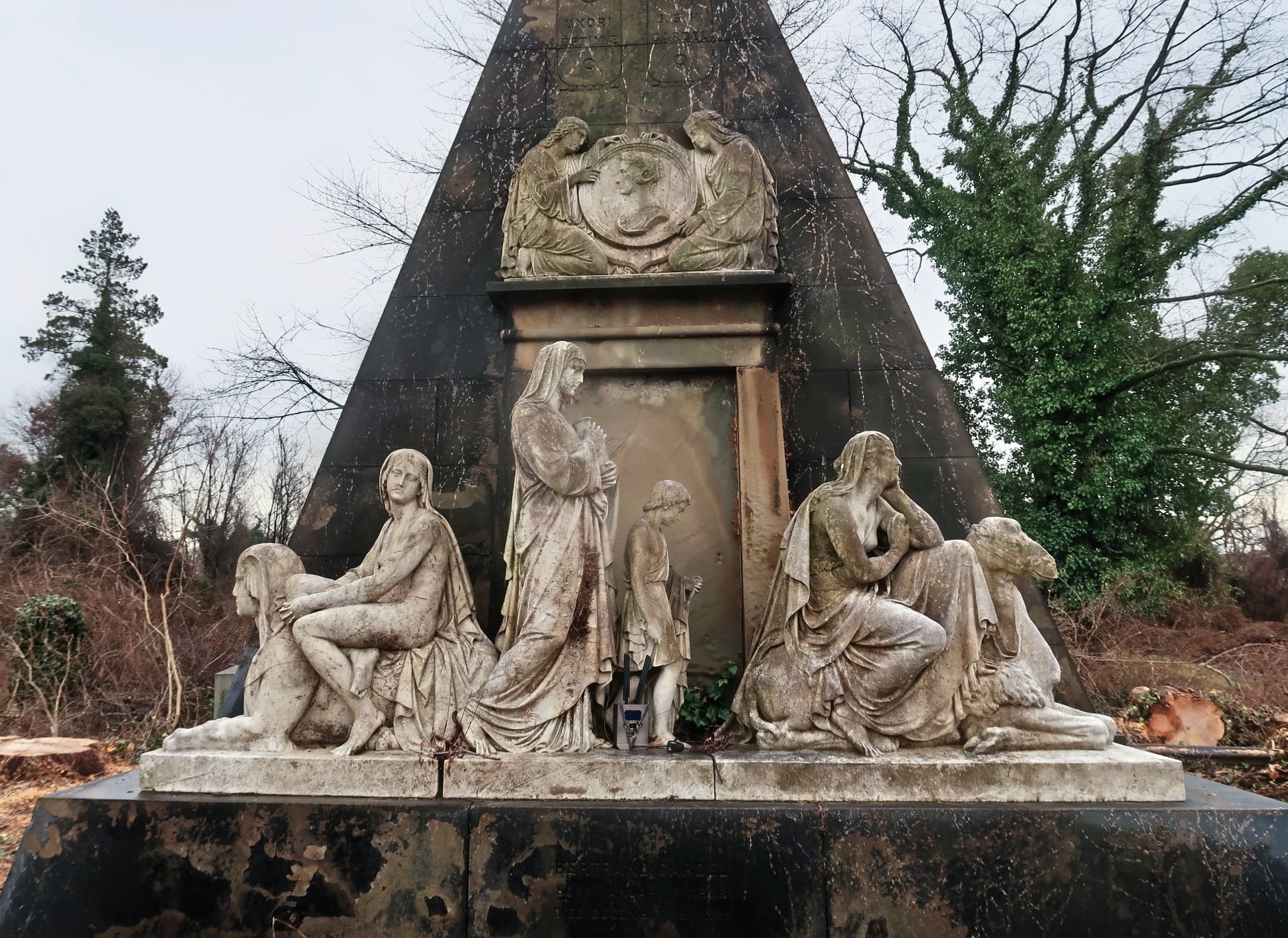 The uppermost figure represents America, surrounded by the emblems of the physical sciences, with one arm resting on the Bible, while the other places the crown of Immortelles (awarded for Julia’s long and earnest labors in the education of American youth) on the head of the deceased.

Although the cemetery is closed to visitors, the right side of the Gardel Monument can be seen from Lehigh Avenue, if you peer through the trees and weeds.

Bertrand Gardel, a French professor and patron of the arts, was a mentor to the artist Thomas Eakins (who also resided in Philadelphia at the time). As a token of his gratitude and respect, Eakins immortalized Bertrand Gardel as one of the players in his painting The Chess Players (1876).

In 1883, Bertrand Gardel died and was laid to rest with his wife. The Gardel Monument is a unique work of art — there is nothing like it in any of Philadelphia’s historical cemeteries.

Currently the cemetery is not officially opened to the public, however with volunteering you may be able to access the grounds, lend a hand, and learn about this historical gem. Mount Vernon Cemetery is a piece of Philadelphia history that deserves preservation.

You can be a part of that by following the Family and Friends of Mount Vernon Cemetery – Philadelphia, PA — volunteer groups have been posting photos and information about their progress. You can also help fund their efforts at mountvernoncemetery.org. (The site also provides more info about the preservationists involved and the history of their efforts to gain control of the cemetery.)

Photos in this post appear courtesy of Mark Pugnetti. 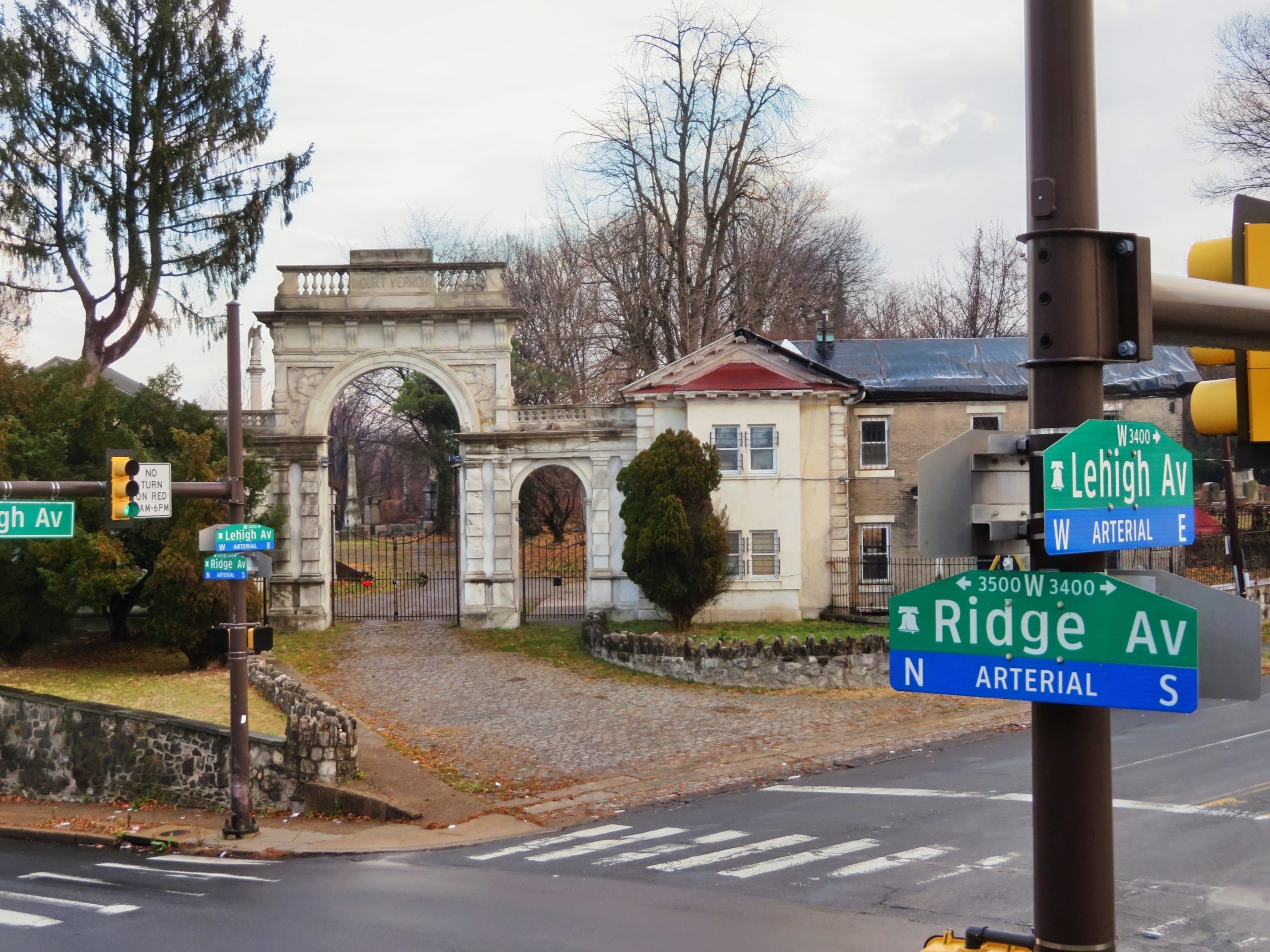 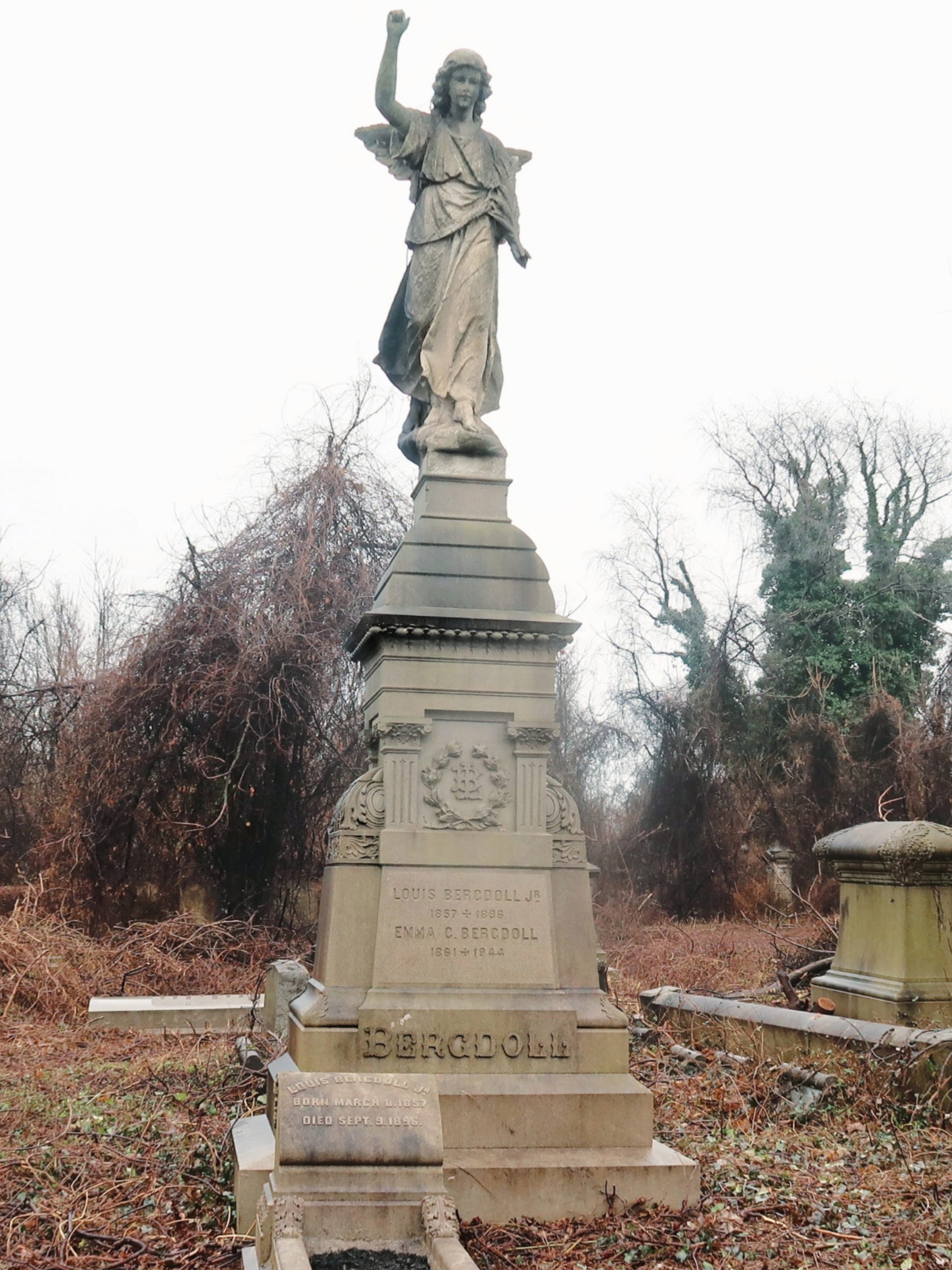 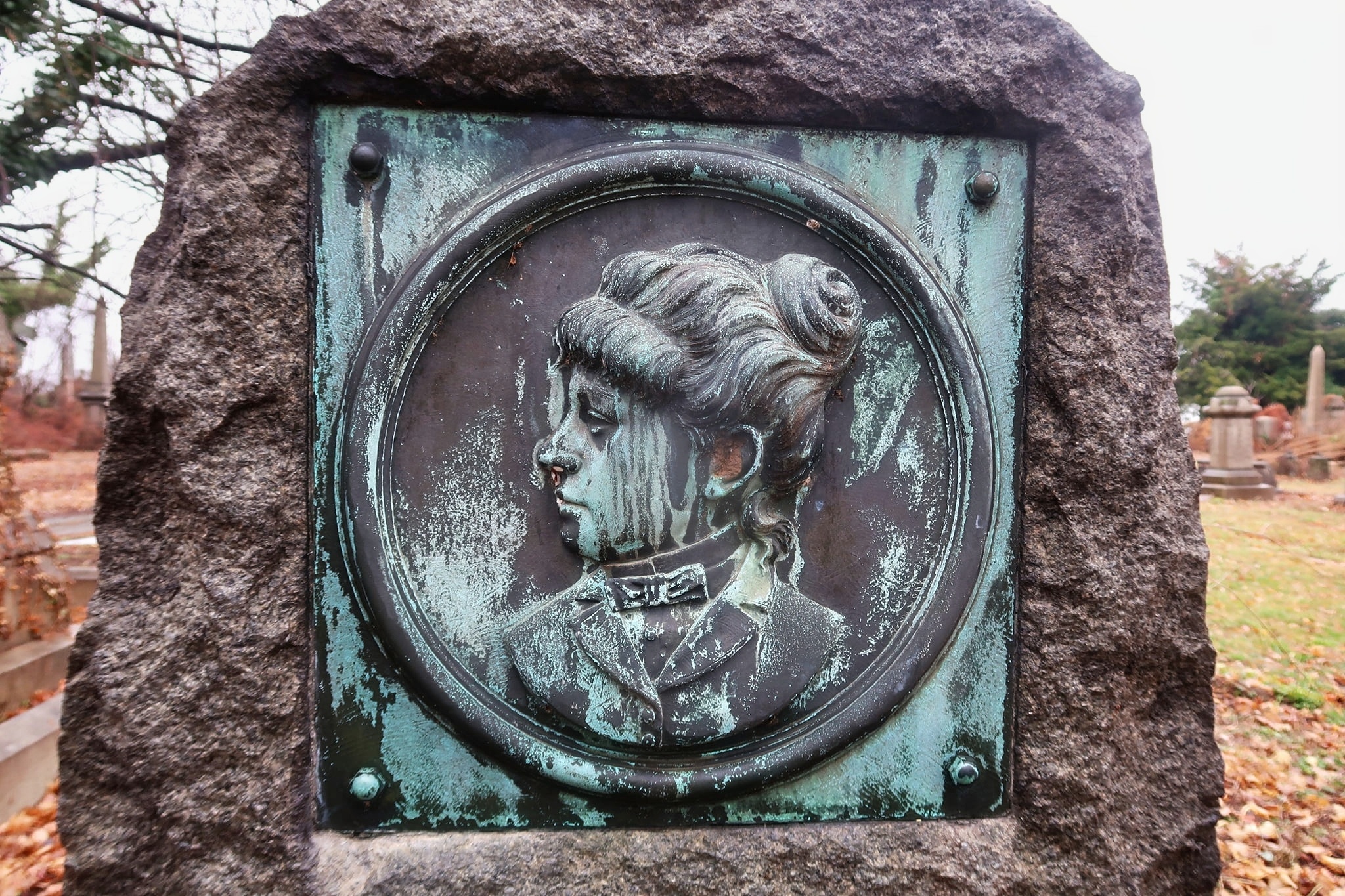 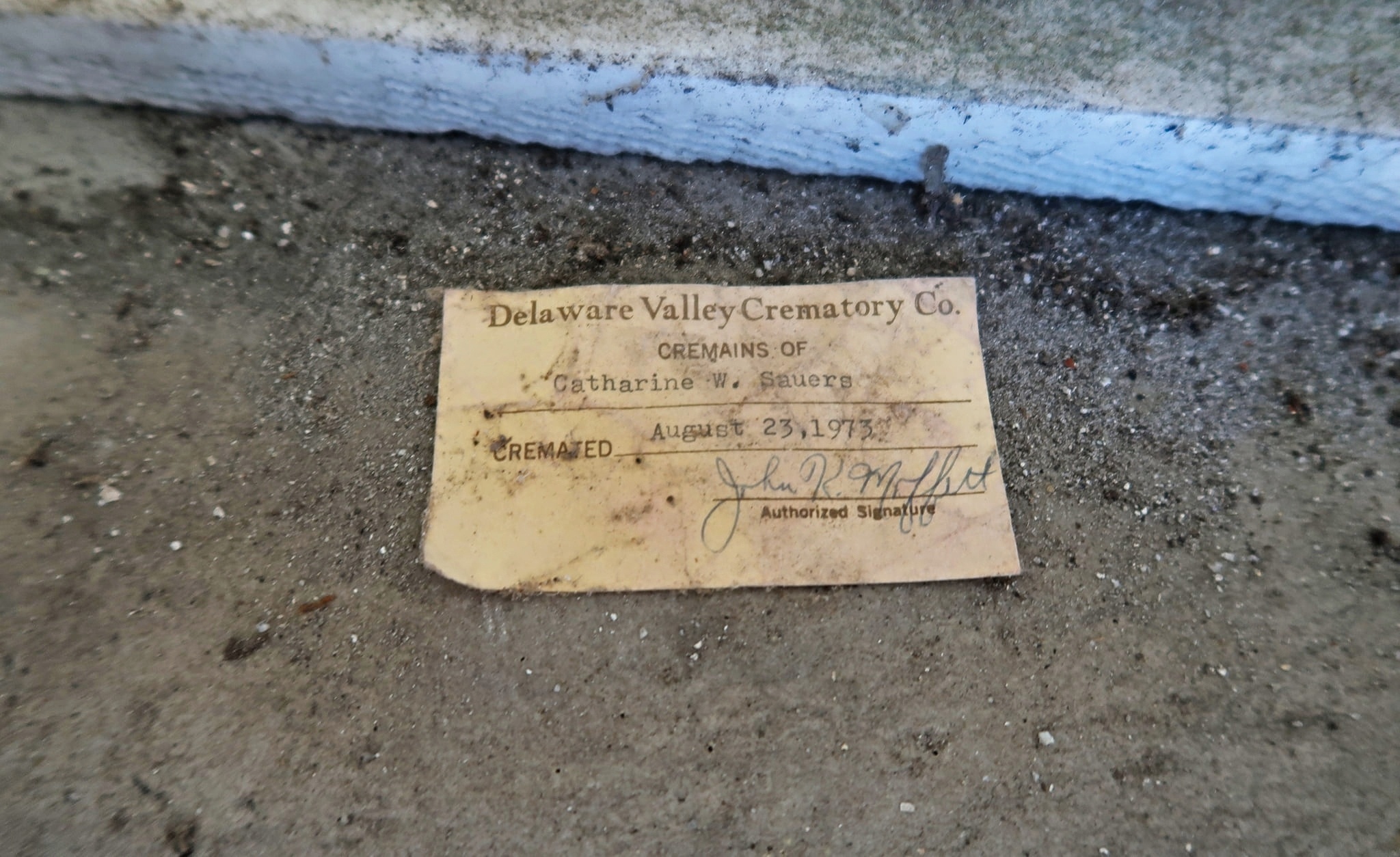 Ed note: this video from September 2021 was too interesting to not share, but please note the cemetery has come a lonnnng way since this was recorded. Please consider helping or donating to restoration efforts — as you can see, there’s a lot to be done to return Mount Vernon to a place of dignity and beauty.

About Mark Pugnetti 2 Articles
Mark Pugnetti is a Roxborough native. He enjoys Philadelphia history, exploring the city, photography, and is an avid runner. Follow him on Facebook @RoxboroughRunner and on Instagram @pugrat.