“Arab” isn’t a race or a religion. Most Arabs are Muslim but many are Christian, Jewish, and other religions too. There’s no box for “Arab” on the US Census forms; instead, they’re instructed to identify as “white“. Confused? An Arab is simply someone with heritage from any of the 22 Arabic-speaking countries in the world, an extremely diverse region spanning not just the Middle East but also much of North Africa.

For centuries, Arab trade routes connected the world’s continents, bringing goods & ideas back and forth from Europe to Asia and Africa. As a result, the Arab world became a literal hub for global knowledge. In the millennia since the first Arab civilizations were established, their inventions and influences have uplifted the human experience across the planet, paving the way for modern advancements like the clock, which introduced the game-changing idea of keeping time, and the crankshaft, which led to technologies like sewing machines, combustion engines, and the bicycle.

While there’s a shared history and literature among the Arab nations, there are many different ethnic and religious origins, as well as a variety of unique art, food, music, customs, traditions and beliefs. Philadelphia’s Arab population reflects this diversity, with vibrant communities across the city – about 10,000 people, a number that’s been growing and breathing new life into old neighborhoods, particularly in the NE section of the City.

If you’re like most Americans, you probably have some blind spots regarding Arab culture. Our media tends to focus on oil wars and religious fanaticism – great topics for ratings but not so much for chatting up your new neighbors from Yemen. Worse yet, recent culture wars in the US have created a society that’s super squeamish about saying the wrong thing, and looking stupid or racist or out-of-touch.

But while staying in our comfort zones feels safe, it’s actually limiting us in harmful ways. Not only are we turning our back on some of the world’s finest food, art, fashion, stories and so forth but, more importantly, this sort of self-segregation creates challenges for small businesses, crime prevention, and resource distribution. It’s also fertile breeding ground for bias, distrust, misinformation, and fear.

The good news is, it’s incredibly fun to break out of social bubbles, especially with the world’s undisputed champions in the Art of Conviviality. Arab hospitality is world famous. Since pre-Christian times, they’ve lived by deep traditions to honor guests – even strangers — with generosity, inclusion, and utmost courtesy.

The Friends, Peace & Sanctuary Journal is the city’s first Arabic newspaper in more than 100 years, serving a fast-growing population including many refugees and immigrants from Arabic-speaking places settling largely in NE Philly. “We’re excited to introduce our readers to such a historic community as Germantown,” said Nora Elmarzouky, one of FPSJ’s editors and organizers.

Germantown has been a multi-racial community since its founding, where the country’s first Abolitionist movement started even before the American Revolution. NW Philly neighborhoods are full of great stories and local characters stretching back generations. Not to oversimplify, but radical thought in Philly tends to come from this part of the city. Historic Germantown is the perfect place for cross-cultural connections.

Join us with local artists and educators for an inspiring celebration of Arabic food, creativity, and community. Enjoy a delicious meal, make some art – and try your hand at Arabic calligraphy. There’ll also be cultural items and artifacts to explore and learn about. Guided by expert hosts Nora Elmarzouky and Yaroub Al-Obaidi, this event enriches understanding and reinforces our bonds as neighbors in this beautiful city we share. 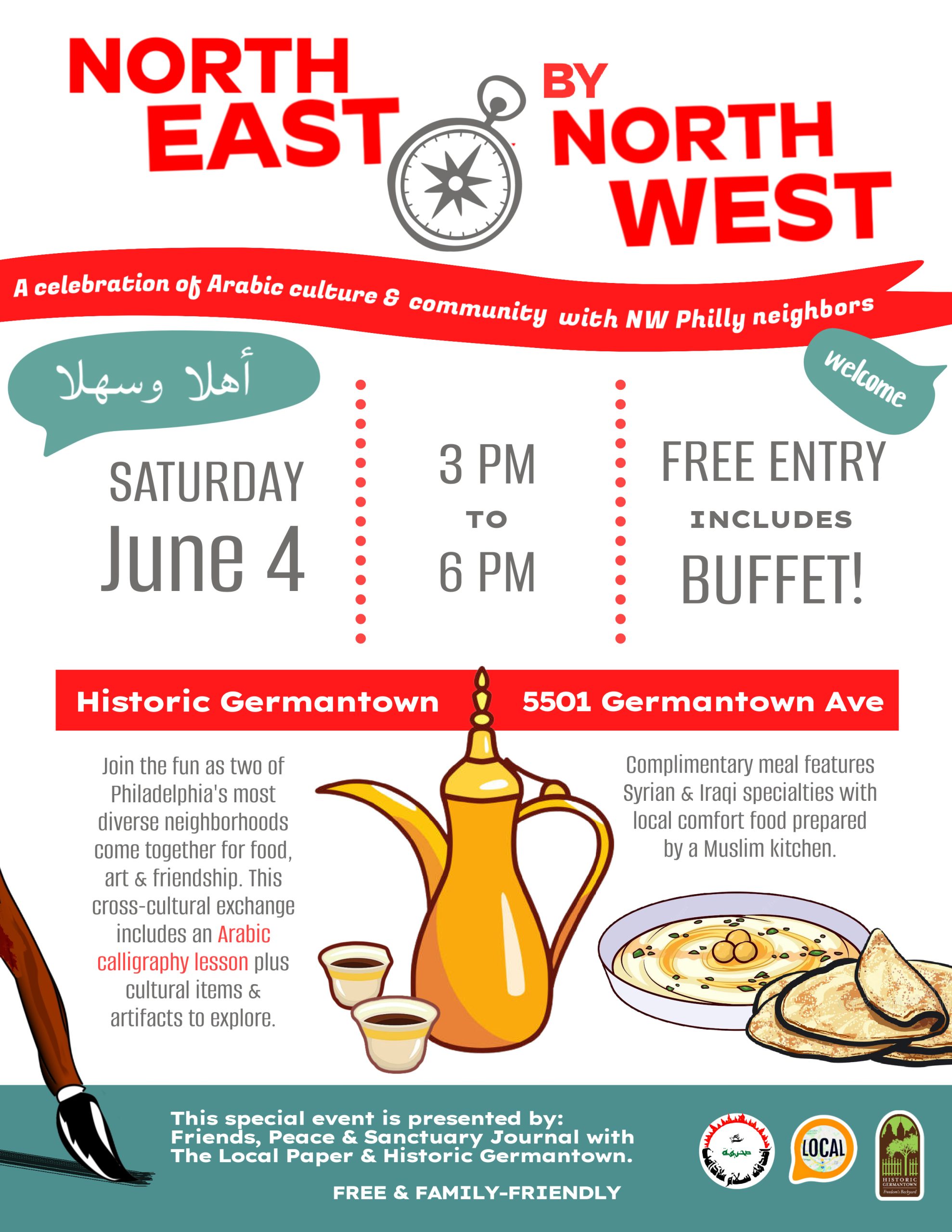 NORTHEAST by NORTHWEST – A cross-cultural event by Friends, Peace and Sanctuary Journal with The Local Paper and Historic Germantown.  **FREE**

WHO’S WHO: This cross-cultural event is a collaboration of two independent newspapers, partners in WHYY’s News & Information Community Exchange (N.I.C.E.).

The Local Paper  Philadelphia’s only grassroots newspaper, a collaboration of local leaders, reporters and broadcasters along with artists and activists from all corners of the city.

Historic Germantown  A partnership of 18 extraordinary destinations in Northwest Philadelphia, committed to preserving the area’s history and promoting cultural and economic development through collective voice and action.

Purple Queen on the Scene

This is why we *can* have nice things! Thanks to one local artist’s mad InDesign skills, East Falls’ community paper shines.  [more…]