There’s no doubt about it. We’re living in times of catastrophic crisis where the lives of innocent civilians are sacrificed in the wars of their masters. Yes in Ukraine, but not only. …Tens of thousands of Afghan citizens have been forced to flee in search of food and safety. 5 million children face famine, an agonizing and painful death… And not a mention of it. Not here, not anywhere… My God, they must be wondering what makes their humanitarian crisis so unimportant. Is it the color of their skin? Is it that they’re not white? They’re not European? …Is it that this decision to rob their country’s wealth was taken by a despotic US president, rather than a Russian one? Because my God, all wars are evil. And all victims deserve support. And until we get on that page, we have no credibility whatsoever.     — Clare Daly, Irish MEP (Member of European Parliament) addressing the general assembly 3/9/22

Ukraine isn’t a place, with all due respect, like Iraq or Afghanistan, that has seen conflict raging for decades. This is a relatively civilized, relatively European – I have to choose those words carefully, too – city where you wouldn’t expect that or hope that it’s going to happen.     — Charlie C’Agata, CBS News correspondent reporting from Kyiv (Feb, 2022)

A lot of people who are watching the Ukraine-Putin war unfold from this part of the country are seeing faces and cultures they recognize and associate with friends and family. That’s probably why local organizations like Jenkintown’s Ukrainian Educational and Cultural Center and the United Ukrainian-American Relief Committee’s Philly headquarters have been overwhelmed with nearly non-stop donations all day, every day.

Contributions are being redirected to UNICEF because smaller charities don’t have the infrastructure to handle such a high volume of assistance. Have you ever heard of such a thing? In Europe, some of the most xenophobic countries are welcoming Ukrainian refugees with open arms. Now compare that to how fleeing families from Syria, Iraq and Afghanistan have been treated, and the difference is staggering.

White people, lean in. Okay this isn’t to shame anyone personally but there’s a big steaming pile of hypocrisy here we need to deal with. Don’t panic – this realization is a good thing, because bias is like B.O. and bad breath: you almost never have a sense of your own, someone always has to tell you. And we’re grateful for this, right? Because then we can fix the problem, and better engage socially with other humans.

In this spirit, we checked in with Yaroub Al-Obaidi, a local Iraqi artist and educator admitted to the US as a refugee in 2016.

Yaroub is also a N.I.C.E. partner through Friends Peace and Sanctuary Journal, Philadelphia’s first Arabic newspaper in 120 years., which grew from a project at Swarthmore College to inspire conversations and increase empathy for displaced individuals resettled to the area.

Although Yaroub is certainly a qualified journalist and community representative, he spoke with us personally, from his own experience and what he’s seen in Arabic social media. The buzz about Ukraine in Philadelphia’s Arabic community mostly confuses him:

Some say they want to go and fight for Putin, but others for Zelenskyy, it makes no sense. I just keep thinking about the people who are in between. The Russians, I’m sure many of them feel very ashamed. They will think ‘Nobody will accept us in the future because of what Russia has done.’ And then the other part, there are something like 3 million refugees.

Yaroub has the unique experience of living through war from two different perspectives: as the invaders and the invaded. He was just a boy when Saddam Hussain sent troops to Kuwait, but he remembers “it was not a proud time to be an Iraqi.” Thirteen years later, the US invaded Iraq over non-existent Weapons of Mass Destruction, and the resulting instability led him to seek asylum in our country.

Not-So-Fun Fact: at least 1 in every 25 Iraqis lost their homes after the 2003 US invasion.

I’m not so much thinking about the President or about politics. I just think about people who are in between. Both people, the Russian and Ukraine people — their lives will change. They have already changed but it’s a lot more than that. Many must now go to another country, leave everything behind, everything! Start all over again in a whole new culture. I feel for them. Because I’ve been through it. Their lives are going to be unsettled for years. You are just waiting: which country will accept me? You can’t make any plans or start anything. Your life is just stopped!

So that’s my concern. Who can help the refugees of the wars that our countries create? Before the Ukraine war, we had 82 million displaced people around the world and now there are 85 million. The Afghan refugee crisis, it’s not yet over, we have a new wave coming, followed by wave after wave, I’m sorry to say. And still the number increases. That’s my concern. I don’t want to talk about politics. I think about these people. 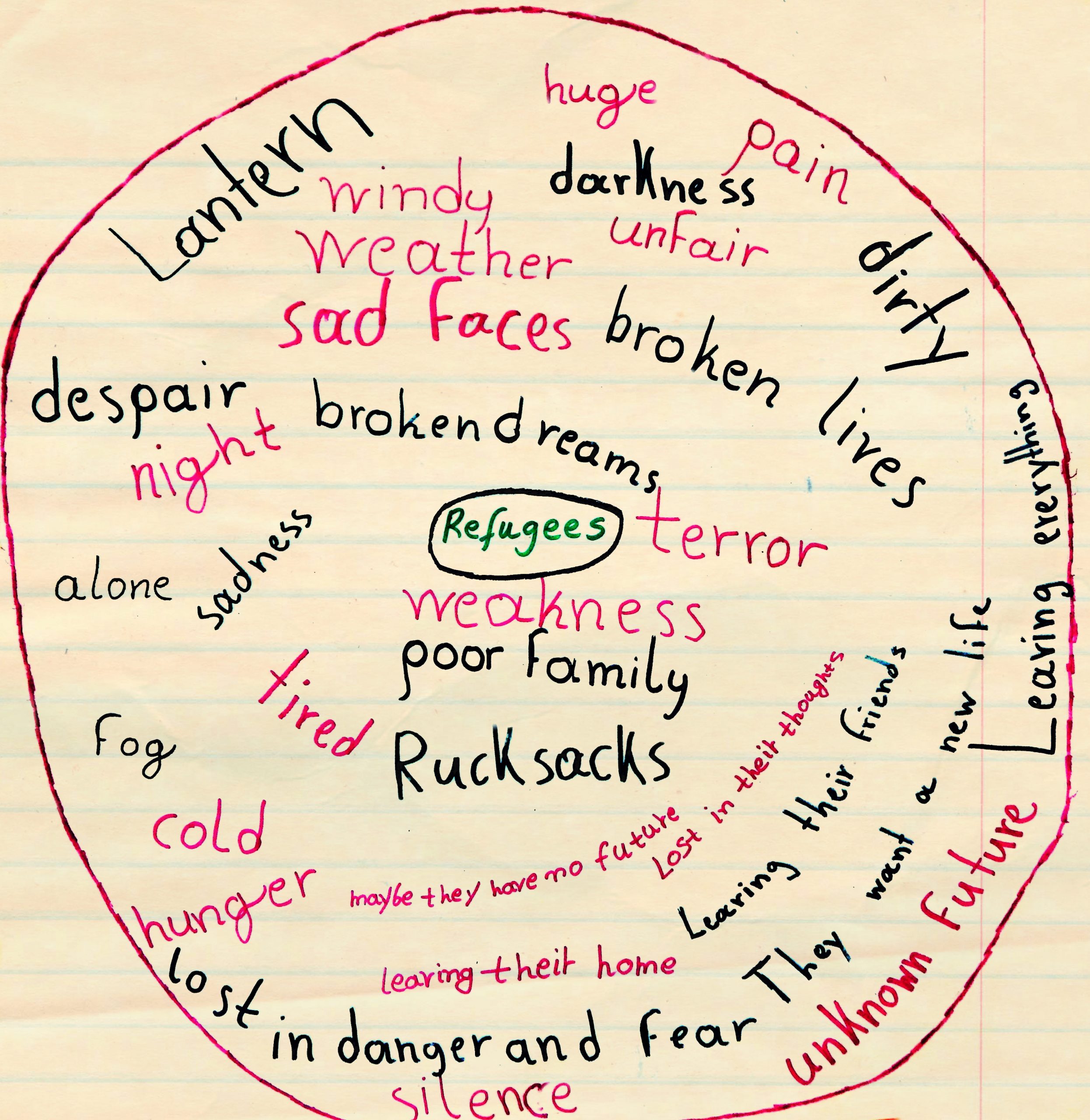 85 million people! To put that in perspective, the United Kingdom’s entire population is around 67 million (about the same as France). 85 million is roughly the population of Turkey, the 18th biggest country on the planet. It’s more than everyone in California and Canada, combined.

Surprised? Maybe that’s because the media doesn’t tend to talk about wars unless white people are being killed. For instance, within 48 hours of Russia’s attack on Ukraine, three other airstrikes went right under our radar: Israel on Syria, Yemen on Saudi Arabia, and the US on Somalia. Isn’t it weird, how some invasions/occupations are big news, and others come off like business as usual?

This is the first time in recent history where we’re seeing the horrors of war inflicted on people who look like us. And you know that feeling of instant empathy with Ukraine, almost like we’re being attacked personally? Think how much it would matter to Americans of all colors, if we could use this pain to see thru their eyes when their lands are being destroyed. If we could be better global citizens to all countries, not just the Caucasian ones.

And yes, I have one more thing to add. The CBS reporter’s comments made me very sad, when he suggested that Ukraine refugees are not like Iraqi, Afghan, Syrian refugees, when he said Ukraine is more ‘civilized.’ This made me so sad, how these people look at some refugees as not the same class, not the same worth. Like we’re not as important, that we deserve to be at war, like it’s normal for us. Why did he say this? How was it so natural to say we are second class?

Let me tell you something. I’ve been here in the US more than five years, and I never met anyone who disrespected me. Even in my work at the museum, giving weekly tours to 20 – 25 people at a time, from all over. Everyone’s respectful and very nice. So this CBS anchor was the first time I heard someone who would speak like that. But even though no one ever said one bad thing to me ever in all these years. When this CBS reporter says something, and now I am nervous what this means. And I am sad.

Epilogue: So Much for Sorry

Charlie D’Agata has since apologized that he “spoke in a way I regret” and then doubled down by adding he was just trying to get viewers to understand the “scale of war” in Ukraine feels immense, compared to other countries where war happens all the time. <face palm> 🤦

Just a thought. What if — instead of issuing an asinine statement – he actually owned his bias? Maybe said something like, “I’m so sorry and clearly I have some work to do on myself, here’s what I’m doing to address my prejudices so I can better report for my international audience…” Right? What’s up with this “I’m-sorry-you’re-offended” crap? 🤮

D’Agata missed a great opportunity to bring awareness to refugee causes and racial disparities. Maybe he could’ve raised some funds? Given some shouts out to Arab cultures and accomplishments? Done a story, interviewed an expert, used his platform to show how a person’s views can expand immeasurably, when the blinders come off.

The world is only getting more interconnected and multi-cultural. Even if D’Agata personally has no interest in diversity, learning to think more inclusively will help him do his job better, and relate more effectively with all viewers. He really needs to thank those people who called him out.

And we’re likewise very grateful to Yaroub for sharing his viewpoints for this article. Make sure you follow Peace Friends Sanctuary Journal on Facebook for Arabic perspectives, art, events and much more. Yaroub will be opening al Mudhif again at the Schuylkill Center for Environmental Education this summer — starting Memorial Day. Learn more about this inspiring guesthouse in the Wissahickon that honors common ground among all people, with simple traditions stretching back into antiquity.

Thoughts? Comments? Your feedback is welcome below, or email editor@revivelocalpaper.com

Community fundraiser for the many families displaced by Putin’s war. [more…]

A unique structure seeks to bring nature and cultures together [more…]