You didn’t think that smokestack came down for nothing, did you?

Dobson Mills is an eight-building gated complex at 4055 Ridge Avenue with 285 one, two and three bedroom apartments at the corner of Scotts Lane. When they announced plans to demolish its historic smoke stack this past March, its parent company in Houston, TX explained that high winds had damaged the structure, which had been deemed unsafe by their insurance adjusters. Now that the area has been cleared, the last phase of Dobson Mills residential construction can begin.

Get ready, it’s coming! Three new apartment buildings in the back lot near the Scotts Lane community garden (which, to our understanding, will remain). When complete, it will offer 135 units with 91 parking spots for cars and 41 for bikes. You can view the plans here but basically it’s just more of the same for this rather homogeneous complex of luxury apartments that boasts a 90% occupancy rate.

The construction requires no new zoning variances — Dobson Mills’ plan was already approved by the neighborhood more than a decade ago when the mills were first designated for renovation. This latest development is the final leg of a 2-Phase plan that, at completion, will be by far the largest apartment complex in the area with a total of 420 units. 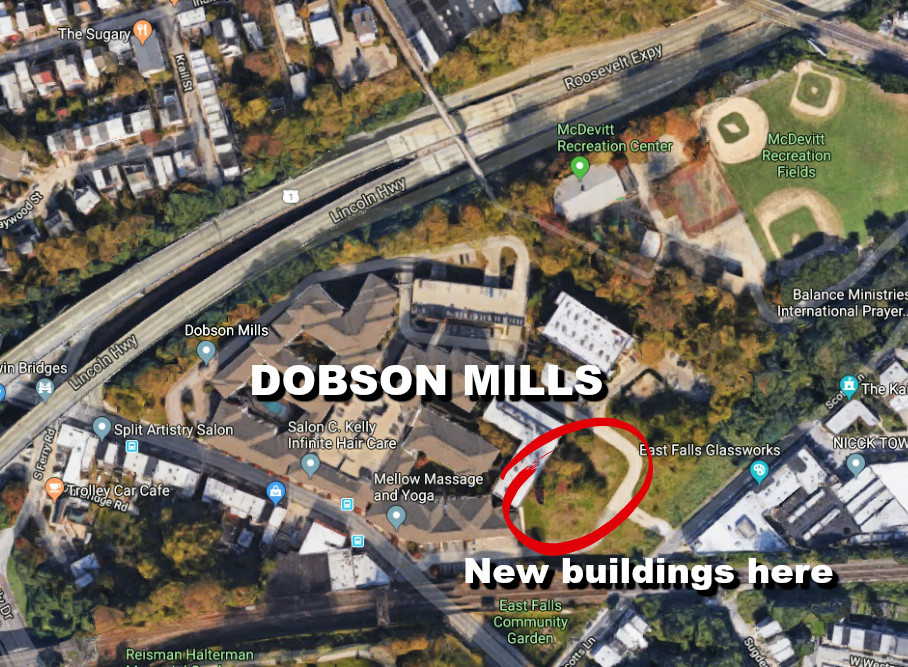 Their plans are substantial enough to trigger a “Civic Design Review,” which is the City’s process for assessing big projects that can affect a neighborhood’s vibe and streetscape. Unfortunately, CDR is basically toothless — developers must listen to experts and neighbor recommendations, but they are not required to adjust their plans.

Dobson’s development team, however, seems to be open to suggestions. Maybe. After their first Review on September 3rd, they were asked to provide a sidewalk to McDevitt and the “SoHo South” businesses which is currently lacking because Scotts Lane is technically a private road. Some neighbors are also concerned about traffic when Dobson Mills possibly opens new entrance/exit gates onto Scotts (which many fear will increase gridlock on Ridge & Midvale). On the other hand, a Philly real estate site recently suggested the complex should build higher density with even less parking for the area.

The project returns to CDR at the end of October — we’ll update this post with the meeting date/time/location as soon available. Again, though: this process is just a formality. Neither city experts nor near neighbors have any legal say in reshaping this project (recent studies indicate developers ignore recommendations more often than not).

What the hell, though. East Falls Forward will be reviewing the plans Thursday September 19th and seeking community input anyway. Come for the free beer, stay for the informative discussion about this and other neighborhood development issues at various stages of the zoning process (including a three-family dwelling on Ainslie seeking a variance).