Storms at the Capitol & in Harrisburg clear the path for a progressive new generation.

Democrats and their progressive allies had reason to celebrate on January 6th as news broke of crucial US Senate victories for Reverend Raphael Warnock and Jon Ossoff in Georgia. The Peach state had voted to send its first Black and first Jewish senators to Washington, which would tip the Senate and unseat Mitch McConnell! This thrilling news, however, was almost immediately upstaged by the most shocking acts of domestic terrorism ever seen in modern times. By Wednesday afternoon, white supremacists had stormed the Capitol building — fully infiltrating the Senate, walking off with Federal property and even tearing down American flags to fly TRUMP 2020 banners.

Wednesday’s violent attack was hardly a surprise. Far before the 2020 election was called for Joe Biden, Trump was sowing seeds of doubt in our election process, suggesting the results could be “rigged” in favor of his opponent. When Biden gave his victory speech, Trump gave his own—a direct challenge to American Democracy. Since then, Trump and his team have tried countless tactics to obstruct a peaceful transfer of power, peddling conspiracy theories to his disturbed cult of followers and riling them up in his refusal to accept the results of the November election.

In the lead-up to January 6th, Trump urged his followers to attend the “Stop the Steal” rallies scheduled in Washington DC on the day Congress was to certify Joe Biden’s win. “Be there. Will be wild!” he tweeted January 2nd.  At the event, his eldest son Don Jr. delivered a warning to congressional Republicans who did not cave to Trump’s delusions, telling them, “We’re coming for you.” Rudy Giuliani called for “trial by combat” with congressional Democrats.

Perhaps most inflammatory of all, Trump’s speech that morning was 60+ minutes of misinformation that flattered and excited the crowd of “patriots,” telling them that their country was being stolen by people who hate it and seek to destroy their lives. “You will never take back our country with weakness!” he told them, urging them onward to the Capitol. “If you don’t fight like hell, you’re not going to have a country anymore.” His fired-up minions then marched down Pennsylvania Avenue as instructed, and launched a fascist attack on our Democracy.

Capitol Police somehow appeared to have been taken by surprise when the rally turned violent, even though social media had been predicting a coup for months. Local press, too, had been warning residents of an “apocalyptic mindset” among Trump fans arriving in DC to protest election results. And it’s not like Trump’s incendiary rhetoric hasn’t caused trouble before. His entire political career, Trump has been famous for inciting violence at campaign rallies — often to the delight of his followers.

This is the dangerous leader who has continuously refused to condemn right-wing terrorism. Who called the Charlottesville rioters “very fine people.” Who commanded the Proud Boys to “stand back and stand by” as if he were an officer addressing his troops. Who has bragged that he could shoot someone in plain sight and still have the support of his base. To Trump’s true believers, he’s an all-powerful ruler who can do no wrong. When he tells them they need to defend his presidency, they respond with predictable zeal.

Yet on January 6th, our Capitol was basically undefended from thousands of violent right-wing rioters, many of them illegally armed with military-grade weapons and zipties for taking hostages. Where was the National Guard? A Jan 5 press release announced the Pentagon had activated 340 members to support DC police, but when clashes began they were MIA. Hours passed before backup from Virginia and Maryland were on the way.

Contrast this with Trump’s response to protests this summer after the murder of George Floyd. Though most were peaceful, the National Guard dispatched 93,000+ troops to defend Federal and private property against minimal looting in 30 cities across the country. They fired rubber bullets and tear gas into crowds who were legally and appropriately assembled. In many municipalities, including Philadelphia, officers were caught on camera shamelessly beating and bullying protesters. National Guard tanks, trucks and helicopters added to the show of force and intimidation. 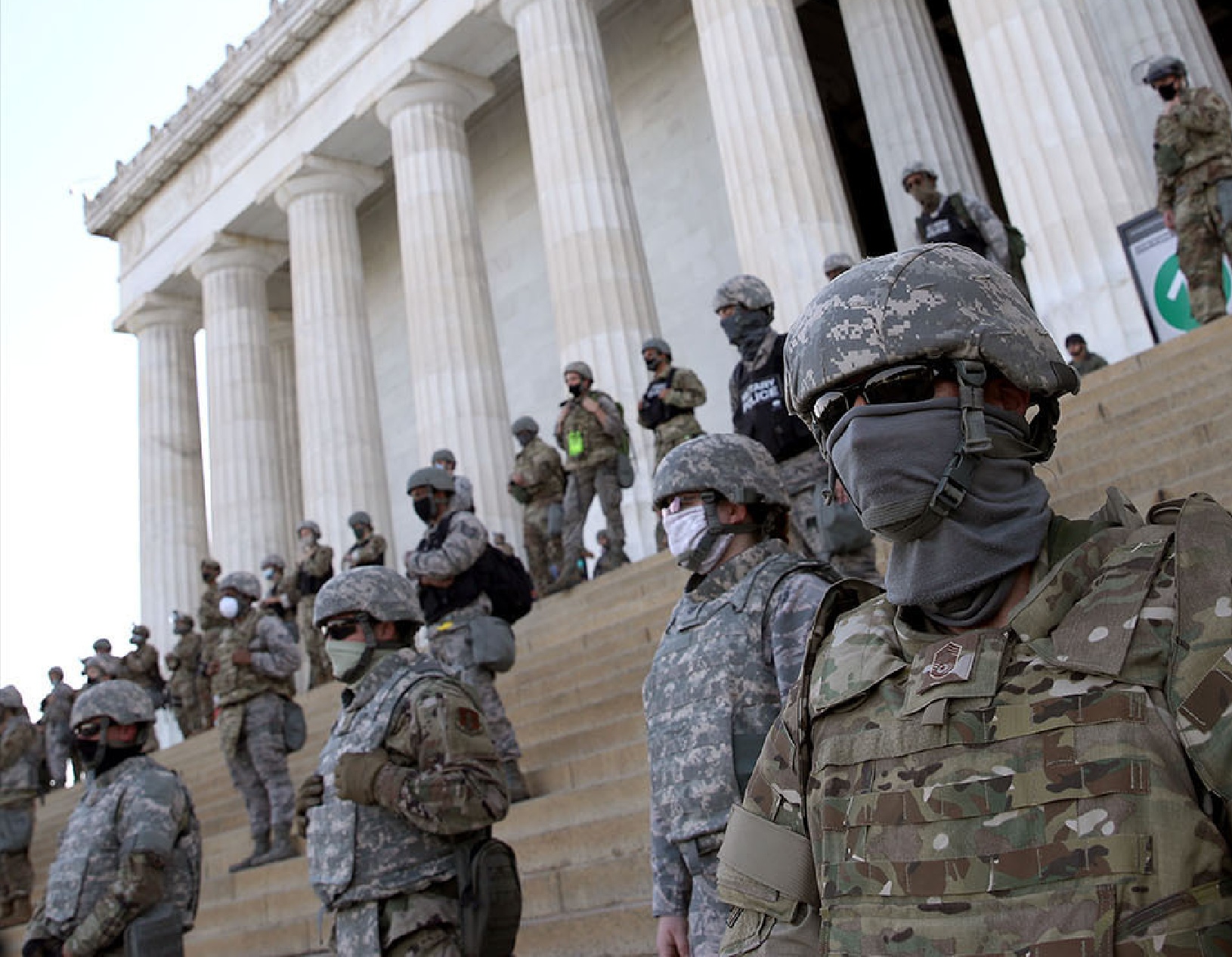 In Philadelphia, the police arrested 723 people during the first two weeks of protest in June, when some demonstrations became opportunities for looting. In comparison, January 6th’s mob trespassed, stole and destroyed Federal property, threatened the lives of elected officials, resulted in four deaths and countless injuries with only 13 arrests by the end of the day. Officers were seen taking selfies with rioters, and escorting them gently from the premises as Mayor Bowser’s 6pm curfew came into effect.

The reason for this double standard is obvious: the June protests threatened white supremacy, whereas this week’s insurrection embodied it. The contrast speaks volumes about race in America. White men can literally storm the Capitol Building in broad daylight — shoot, loot and vandalize — then just walk away scot free. Go back to their QAnon echo chambers and celebrate their patriotism, blame Antifa, call for Civil War. As Trump told them in his weird video address that evening, they are loved and special. This seems particularly egregious in a year when police have murdered Black citizens for using a counterfeit bill, having a mental health crisis, and even sleeping in their own home.

In addition to the support of extremists, Trump also enjoyed a whole host of Republican enablers: 139 representatives and eight senators voted to overturn 2020’s presidential election results that day. Even more troubling, some of the country’s own elected officials actually participated in the insurrection, including PA State Senator Doug Mastriano and former Representative Rick Saccone. Hardly surprising, considering Saccone is a long-time conspiracy theorist and Mastriano is well-known for his Islamaphobic posts and comments on social media. Their move to attack our democracy proves that fear and hate-based politics have dangerous real-life consequences.

For PA state senator Nikil Saval (1st District), this display from our senate Republican’s is a page taken from the Trump handbook, tweeting that “a straight line” can be drawn from the events in Harrisburg on Tuesday to the attempted coup on Wednesday. “This violence is the logical step after years of GOP contempt for law, fact, and human life,” he wrote. Politicians like Mastriano, Corman and our Republicans in Harrisburg use misinformation and conspiracy theories to line their pockets, advance their careers and promote their own best interests, to hell with Human Rights. “We have organized and fought for so long, and we cannot stop — now we mobilize to condemn this everywhere.”

When the dust settles what will we have learned? “This is bigger than Trump,” said PA state representative Chris Rabb (200th District), “This an indictment of our system at large!” Indeed, white supremacy does not begin or end with Donald Trump, it is the air we breathe. The people who have been conned by Trump have been radicalized enough to plan mass shootings, kidnappings of elected officials, and now, insurrection. Let us be clear: they won’t spontaneously disappear after Inauguration.

But we’re far from helpless. Together we can defeat their warped vision of the world by building a people-powered movement that will both out-organize the far right, and hold the Biden administration accountable to the will of our communities. Thanks to everyone for doing their part to stay informed and continue to pressure our leaders to make progressive choices for a diverse, equitable, kind and inclusive governing process.

TAKE ACTION! Reclaim Philadelphia has been reclaiming and restoring political power back to the people since 2016. Connect with neighbors organized for racial, economic and gender justice, join their NW Philly Neighborhood Group! Also, here are the 90+ PA elected officials who supported challenging Biden’s win (in case you’re itching to write an email or leave a pointed email).

JANUARY 19 – 20: Germantown journalist Cory Clark will be reporting on the Inauguration from Washington DC, stay tuned for Local coverage you won’t see anywhere else.

About Reclaim Philadelphia 2 Articles
Reclaim Philadelphia endorses and supports progressive candidates and policies that fight for a vision of putting working people before the profits of corporations and the super-rich. To learn more about your local group visit their information page here.
Website

Summer in the City

Ria G’s cover for August savors the last scenes of the season.  [more…]

For your business and pleasure. Unscrupulously and doggedly gathered –and wistfully curated– by Dr. Karl Von Lichtenhollen [more…]

A community day of healing and restoration in North Philly. [more…]