Relearning the history of the (not so) New World with Sally Blagg’s exciting virtual book club this winter.

Context is everything. Saying “Have a nice trip!” to your boss before he leaves for a conference is one thing. Saying it to him after he’s stumbled down a flight of stairs is a whole different story.

The fun thing about context is how new information can bring on those delicious “a-ha! moments”, where scattered facts suddenly coalesce into a Big Picture that explains something that never made sense before. Bing! A lightbulb pops on, and you see with eyes anew.

Talking to Javat Agni is like one a-ha moment after another, which is why customers love to chat him up at Germantown Espresso Bar, which is where we first encountered him. At the time, Agni – or David Rose, as he was formerly known – was finishing a stint at the helm of Germantown Special Services District, while fostering change and preservation via Sally Blagg, a BIPOC-run urban design firm he founded more than a decade ago (named for a family matriarch, one of the last Saura Indians in 1776).

Indigenous design is a respectful, sustainable model that embraces connectivity to the land and to each other, especially through shared history and knowledge. This is totally Agni’s wheelhouse! A former student in Penn’s historic preservation program, he instinctively seeks to look beyond the surface, always. To trace the passage of time, connect the all the dots, reclaim what’s been lost and brainstorm a replacement.

With Sally Blagg, Agni creates opportunities for Germantown culture, business and understanding. Pre-Covid, they did a lot of events: concerts (like the Nina Simone tribute shown here), dinners, art exhibits, film screenings, etc. This summer they developed a CSA program in Historic Germantown to provide fresh food and gardening skills to the community. For 2021, they’re planning new workshops and tentatively looking forward to holding gatherings again, including classes/study groups in The American Teahouse (opening soon in Germantown).

Until then – Sally Blagg is offering an exciting virtual history experience where old “truths” transform with fresh context. Their 2021 Winter Book Club guides readers to re-examine what we think we know about the colonial forces that founded our country (and continue to influence the world).

The series covers three ground-breaking books through conversational discussions with participants all over the country. Register at sallyblagg.com/winter. The book club is free, the a-ha! moments are priceless. 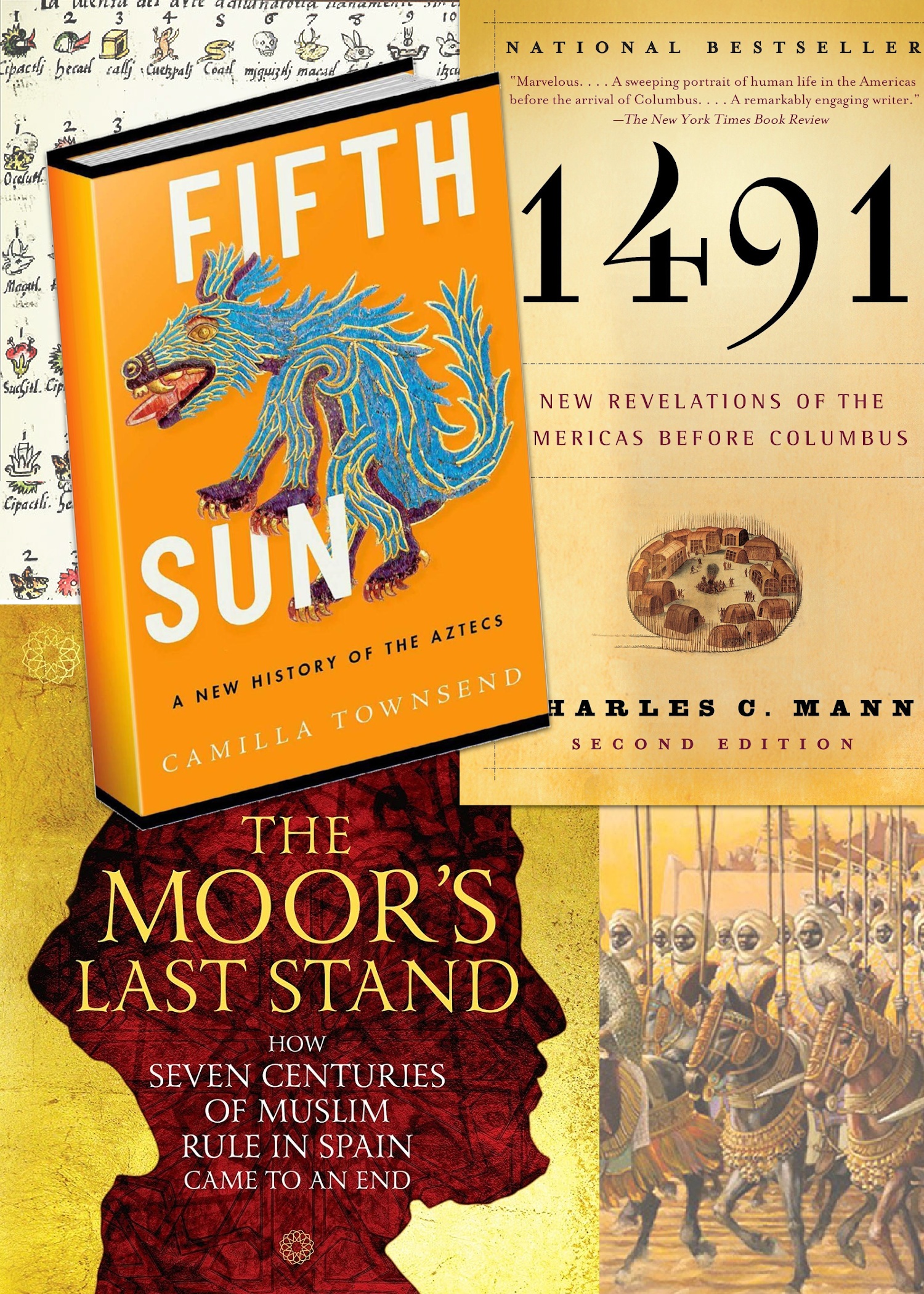 The Aztecs (aka the Mexica) are famous for their human sacrifices – specifically, tearing people’s hearts out and mortaring their skinned skulls into towers. But they were also an amazing civilization! A huge, powerful empire of 5 – 6 million people, in 500 cities. They had schools, palaces, vendors, street food, running water, floating gardens – their own calendar. They thrived for centuries but this book isn’t about talking up the Aztecs. In Fifth Sun, the Aztecs themselves do the talking!

Based on indigenous Nahuatl-language sources, the book presents the Mexica people’s history in their own words, including their interactions with the Spaniards who would ruthlessly colonize them in the 16th century. Real stories about everyday Aztecs – slaves, warriors, concubines, politicians, etc – reveal a complex and sophisticated society far removed from European stereotypes. A fascinating narrative that’s never before been accessible to English-speaking readers.

The Moor’s Last Stand: How Seven Centuries of Muslim Rule in Spain Came to an End by Elizabeth Drayson  (Saturday, February 27. 6PM)

For centuries before Columbus claimed the so-called New World for Spain, Europeans had been fishing off America’s coast, occasionally even coming ashore to ride out storms and make repairs to their vessels. What Columbus actually “discovered” in 1492 was colonialism. This book explores why Ferdinand & Isabella were so pumped to pillage the planet in the name of Christianity.

The action-packed story that unfolds is the first-ever account of the last Muslim king in Spain, after 700+ years of religious freedom and diversity. A tale of scheming, intrigue, betrayal and tragedy – but also heroism – that leaves readers to ponder how our world might be different today without the scars of unchecked European Imperialism.

Through European eyes, America was a vast, virgin frontier for the taking – and truthfully it may have seemed that way for early settlers. More than 90% of the Indigenous population had been wiped out by disease by the early 1600’s. Native tribes collapsed so fast, people were literally dropping in the street with no one to bury them. When Squanto taught the Pilgrims where the plant, fish, get water, etc, he was essentially showing them around his deserted hometown, providing turn-key colonial opportunities.

Before “the Great Dying,” many advanced, powerful empires prospered in the Americas, sustaining more than 60 million people. This book explores the astonishing accomplishments of pre-Columbian Indians, engineering their world in ways we are only now beginning to understand. To wit: Researchers are pretty sure the Amazon rain forest was man-made.

Tips on attracting this harbinger of good luck & prosperity by the Bluebird Society of Pennsylvania With the drama of 2020 in our rear view, how about something simple and beautiful to start off the [more…]

Season of the Which?

Time to get centered before the Holidays hit. [more…]