If the 1% wants the economy opened so badly, let them get out there.

Seems no matter which way you look these days, there’s fear. We’re all afraid of this virus – and with good reason, it’s deadly. And it’s shut down our jobs, drained our savings, exposed us to health crises that we can’t afford.

Then on the other hand there is all this “Chicken Littling” about the economy collapsing…PLEASE! Remember Chicken Little? Thinks the sky is falling so he riles up the whole barnyard and they are all so stupid and frantic they let a fox lead them straight to his den. At the end, all the followers are eaten but Chicken Little survives. He was probably in cahoots with Foxy Loxy from jump street. Think about it.

All these obviously-unbalanced people demanding “liberation” from COVID-19 restrictions – who do you think pays them?

Trump benefactors like the Koch brothers, Adolph Coors and the DeVos family — one of whom is the country’s first Secretary of Education to actively work to defund public education. Three of these states Trumps needs to win and he knows they are democratic elected governors for the exception of Texas which is turning blue quickly.

I keep saying it: these super elite rich people are sociopaths; they do not care about us. Since the 1980’s, they have been buying our government though lobbyists who literally write the laws that our representatives sign in many cases. I am not making this up! It is a well-studied and widely reported fact that 61% of the time a corporation wants special legislation for their own interests, and they get it. And if someone tries to pass a law against their interests, it will fail to pass 100% of the time.

Think about that! Corporations have 100% veto power in our Federal government. So, they can shoot down any laws that go against their interest. This is the norm in government it happens all the time! In our sick, brutal Capitalist oligarchy, a tiny fraction of our population strives at any cost to keep more and more wealth and power to itself. I ask you, why is this? The current administration couldn’t seem to dismantle public programs and environmental protections fast enough. Even in the middle of a pandemic, they obsess about the economy.

Newsflash – “the economy” is just another word for “corporate profits.” The number of billionaires pushing for everyone to go back to work before we’ve got a handle on this virus proves one thing (and one thing only): They do not make their money, we do.  Not just the “job creators” but our entire government! If we are not working, we are not paying taxes. We make all the money, get it!

They think they can buy us off with $1200. Do they even know how much a typical mortgage is? Or a month of car insurance, childcare or groceries? I guess the real question here is why would they? Their lives of excess and entitlement are so far removed from ours. We the people cannot expect the corporate forces controlling our tax money to support us willingly. We the people need to save ourselves.

We need a people’s bailout! Coronavirus has provided us opportunity for a good old-fashioned worker’s strike this May. A stay-at-home sit-in demanding immediate relief for front line workers who are saving people’s lives and sustaining us in quarantine. We need to prioritize healthcare funding for all, no exceptions. We need reliable, accessible testing for everyone.

Instead of paying to keep corporations afloat, we need to expand unemployment insurance for workers, increase food aid programs, extend housing assistance, relieve student debt, subsidize childcare and public transportation bringing this country back from its thievery to prosperity. In addition, we the people need cash! Our $1200 one-off is actually a loan against future taxes which is the money we already paid into the tax system where multi-trillions were misused for corporate welfare. We need a public stimulus like Europe and Canada, that extends multiple payouts over months.

We the people need Democracy! We need to expand voting by mail, and online/automatic voter registration. We need our federal, state and local governments to continue to operate safely and fairly. None of this electoral college bullshit – we need one person, one vote.  We need national campaign finance reform without a two-party system working for the same corporate bosses. We need sweeping anti-corruption legislation that puts the country back in the hands of the 99 percent who keep the system/economy running.

Wake up! A society based on endless profit and consumption will ultimately exhaust its resources, including us, its workforce. We need to have the courage to say NO to risking our lives for their bottom lines. If the sky is falling – so be it. We the people can pick up the pieces and build a better world.

Hell No, We Won’t Go
Funny how once the CDC confirmed people of color were being disproportionally affected by coronavirus, suddenly Trumpers are in a rush to open the economy. After you, asshats.

The rest of us need to dig in and stay home until our government meets the World Health Organization’s six conditions for lifting restrictions: 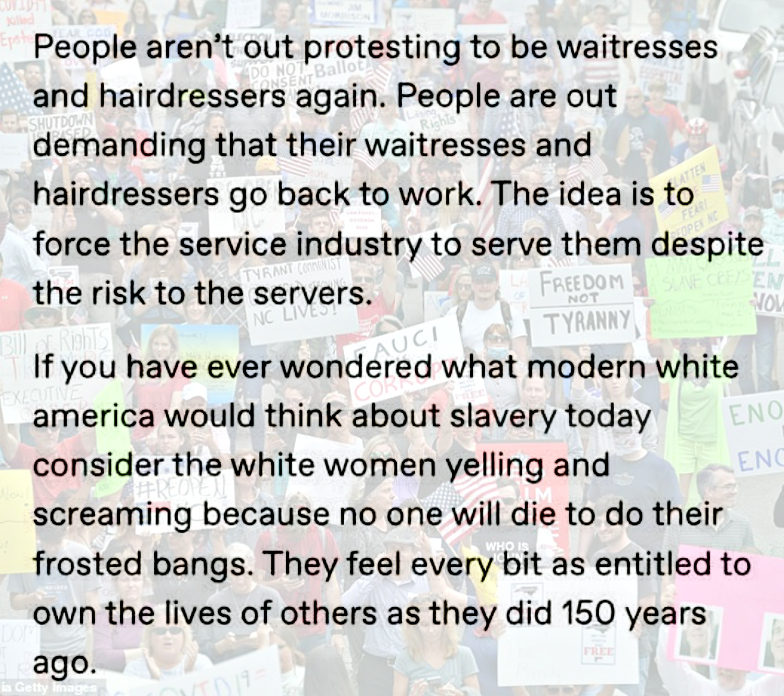 Shelter from the Storm

Rich Better Have My Money

Corporate America must pay up for the People [more…]